During the show, Hoshi talked about the donation he had made toward COVID-19 relief efforts, his memories as a trainee, the gift he recently gave his parents, and more.

Earlier this year, Hoshi was revealed to have donated 50 million won (about $41,500) to the Hope Bridge National Disaster Relief Association. Hoshi explained, “It turned out there was a record of the donation. I told the agency not to talk about it, but I think they put out an article.”

As the choreographer for the group, Hoshi shared that he had been extremely strict during SEVENTEEN’s trainee period. He said, “SEVENTEEN had to do well. Our agency wasn’t that big, and we had no other teams we could join. The harshest thing I said during that time was, ‘Because of someone like you, the team is going to fail.’ The members now say that as a joke to me when I make a mistake.” 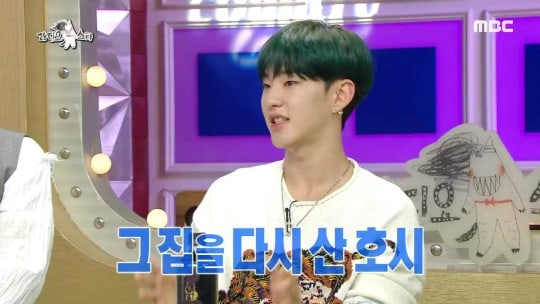 Hoshi also talked a little about managing his health. “The week goes by fast even when I do nothing but take care of myself,” he said. “During our tour of the Americas, I suddenly felt my head ringing during the Mexico concert. After that, I realized the importance of managing my stamina. I get a lot of IVs [with Ringer’s solution, used to treat dehydration] and take a lot of nutritional supplements. I take about 15 in the morning and the evening. A two-month supply of supplements costs about 3 million won (about $2500). The IVs cost about 1.5 million won (about $1200).”

He also shared a humorous anecdote about SEVENTEEN’s reputation. “We’re called the next-generation idols because we have three cars,” he said. “When we go to perform at university festivals, the lineup is usually kept secret, but people find out it’s us because there are three cars.” In Korean, the phrase “next-generation” sounds similar to the phrase for “three cars.” He added, “Now we have four cars. We also added another dorm.”

Finally, Hoshi shared the story behind a gift that he had given his parents that had brought his father to tears. “There was a house that we used to live in when my father’s business was doing well,” he said. “When his business went through a rough patch, we sold that house. I bought that house again. One day, I was lying in that house with my mom, watching TV, when I saw my father wiping away tears in the window. I had memories in that house, so I really wanted to live there again.”

He added, “I gave my mother and sister the gift of double eyelid surgery.” 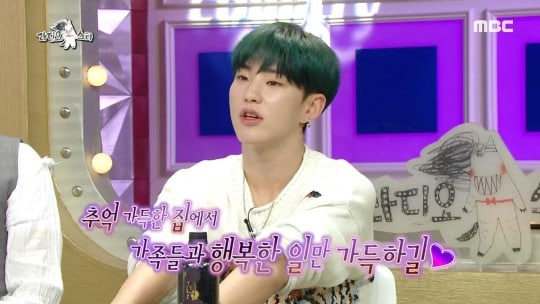 Check out an episode of “Radio Star” below!

SEVENTEEN
hoshi
Radio Star
How does this article make you feel?