In these past two weeks of “I-LAND,” we learn about a new grading system, see some shuffling of trainees, and watch as they take on new tests. Here are some of the bigger developments that went down in episodes 2 and 3:

We first head in to the second episode by getting some new information via Namgoong Min, the show’s narrator. There will be four tests in total, and the final 12 will be voted in by I-Landers, Producers, and viewers (also called Global choice). What’s interesting is that they also mention that the final 12 can “go to the next level that will determine the final debut group.” So if there’s a “next level,” does that mean the final 12 aren’t guaranteed to debut, or just that they won’t debut right after?

The vote out (a.k.a the flurry of betrayals)

The 16 trainees that were voted into I-LAND in episode 1 now have two hours to decide which four they are going to vote out. We see a whole edit of Seon going around trying to build relationships with the other trainees, likely in hopes to keep himself safe. And as was hinted in the first episode, while Ta-ki and Ni-ki seem to be very close with each other, Ni-ki actually votes him out. Ni-ki does tell Ta-ki of his intentions beforehand, suggesting that he could use more training, which I do agree with. And really, Ta-ki is so adorably enamored with Ni-ki that he’d probably go along with whatever Ni-ki suggests.

The other “backstab” comes in the pair of EJ and Daniel, who performed together in the entrance test. EJ votes Daniel out, but—plot twist—EJ is the one who is sent to the Ground instead. Feeling sad for him, Daniel goes to comfort and hug EJ, not knowing he had just experienced some anime-level betrayal!

The 12 I-Landers hanging around for the first test.

The introduction of a new system

We are introduced to a new system that emphasizes the collective destiny. The average score obtained from the I-Landers’ performance will affect the number of dropouts. (If the average is above 96, no I-Landers will be voted out; if they score under 70, six will be voted out). This is a pretty interesting system, and I like that there is some unknown factor in play which makes for great reality television! It also brings the theme of individual vs. team into play, and the trainees will constantly have to weigh their own interests against the teams interest. 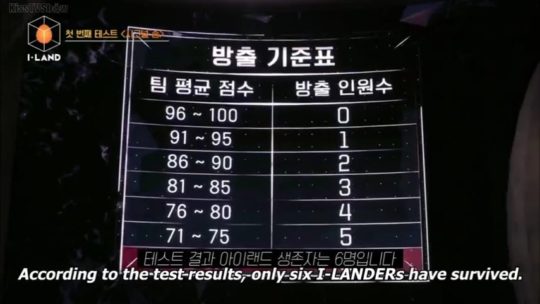 As for the empty spots left behind by the booted I-Landers, Grounders will be chosen to fill those spots. And who does the choosing? The Producers and Directors (ie. Rain et al., not the producers and directors of the show). As mentioned in my first impressions article, I wasn’t completely in favor of how they did their first voting, arguing that it wasn’t the fairest due to herd mentality and so on. This new system in place though, I couldn’t be more happy with. By having I-Landers in charge of voting people out of I-LAND and having the Producers and Directors in charge of choosing Grounders to fill in the spots, this means that neither group of people will have power monopoly. This can hopefully avoid a lot of potential issues, such as cliques within the trainees and biases within the adults.

For the first test, the I-Landers are to perform to the show’s signal song (the theme song), titled “Into the I-LAND.” The I-Landers choose the parts themselves, and they recommend Heeseung for the center part. Also notably, Jay constantly raises his hand, wanting to get chosen for the parts, but the trainees keep voting for the other guy. In the confessional, Jay admits that he feels resentful and humiliated, and I can’t blame him. It must really hurt to keep putting yourself out there, only to be shot down time and time again. He has a mini-outburst, but continues to raise his hand right after, so that’s pretty resilient of him. 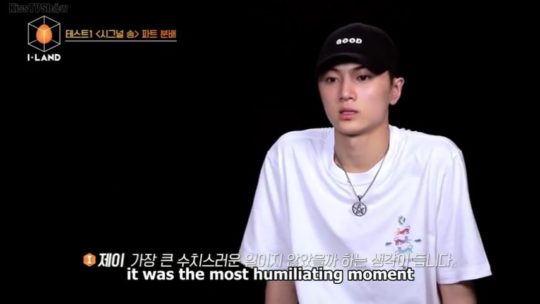 After the parts are divided, Heeseung leads the dance practice, but the other I-Landers notice that he changes some of the moves at his own whim. This rubs some of them the wrong way, and the camera even catches a few of them making fun of Heeseung’s dancing behind his back. Eventually, the I-Landers sit down to have a conversation, and Heeseung offers to give up the center part, which then goes to Ni-ki. During the mid-point check with Rain however, he notes that Ni-ki needs to work harder on his singing, and the viewers are left wondering whether the group switches out the center again. 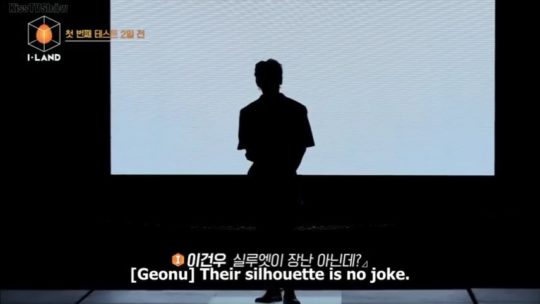 I could tell it was Rain from his curly-haired silhouette!

Discovering another side of Hanbin

Before we get to the results of the first test, can we just shine a spotlight on Hanbin? He was responsible for much of the hilarity in the second episode, accidentally mispronouncing the lyrics and changing them from “holding onto a hand” to “cutting off a hand”! That sure escalated quickly! 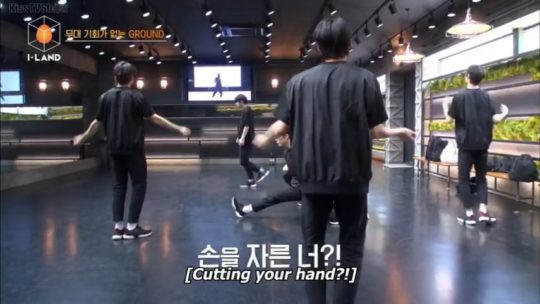 Also, Hanbin has some chaebol male lead potential in him! Just look at how he comforts Jaebeom, after Jaebeom fails to finish recording his video tryout. LOL!

First test results and vote out

In the end, Ni-ki remains in center position, but his pitch is still unstable. Geonu sounds good, especially considering his parts are mostly in the higher register. Also, Jake‘s mic falls off at the most inopportune time, causing him to miss out on his only line.

The results turn out to be harsher than what any of the I-Landers expected, ranging from 40 to 75. Jungwon scores the highest with 75, with the Producers saying that he easily attracted their attention. Ni-ki, though not performing to expectation, still scores a 65. And given Jake’s mic incident and how he fumbled the formation, he scores the lowest with a 40. The average comes up to 59, and so half of the I-Landers need to be voted out. After the dust settles, the six outgoing I-Landers are Youngbin (11 votes), Daniel (11 votes; notably he’s the second highest scorer with a 70), Jake (10 votes), Jay (9 votes), Nicholas (8 votes), and Ni-ki (8 votes). 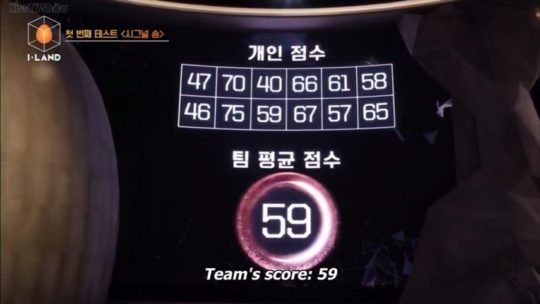 In case you’re wondering why only the I-Landers are mentioned for this first test, that’s because the Grounders don’t get a chance to perform on stage. Rather, they film their solo tryouts, and the Producer team evaluates them based on that video. And after review, the six Grounders moving into I-LAND are Taeyong, Jaebeom, EJ, Yoonwon, Sunoo, and Ta-ki. Interestingly, EJ and Daniel, Ta-ki and Ni-ki have again switched places! Will they ever be in the same space?

The second test is a test of teamwork, where the 12 I-Landers will perform BTS’s “Fire,” complete with a dance break featuring difficult, collaborative choreography. Heeseung, who is elected to take the center part again, decides to approach the test in a different manner. In his mind, he probably believes that raising his personal score will help raise the overall score, and so he spends time concentrating on his own practice rather than leading the team. He even goes to say that it doesn’t matter if they’re not in sync. Which may not be the best idea, considering that teamwork and collaboration is literally the theme of this test.

This tactic of his comes back to haunt him when Zico and the other Directors come in for the mid-point check. Director Son Sung Deuk in particular finds their performance terrible, frustrated that they chose to skip the collaborative parts, their moves aren’t in sync, and the formations are off. 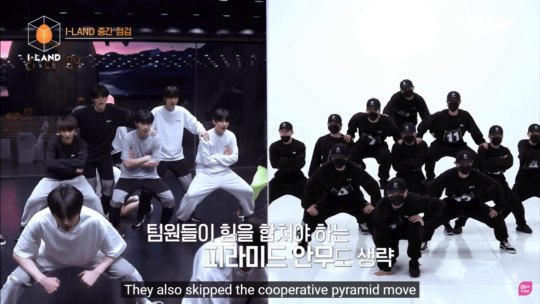 The Grounders aren’t doing any better either, with Rain tearing into them about their “embarrassing and disrespectful” showing. Jay, the center for the Grounders, gets the brunt of Rain’s anger after he informs the adults they won’t be able to show the collaborative choreography because it’ll be “dangerous.” 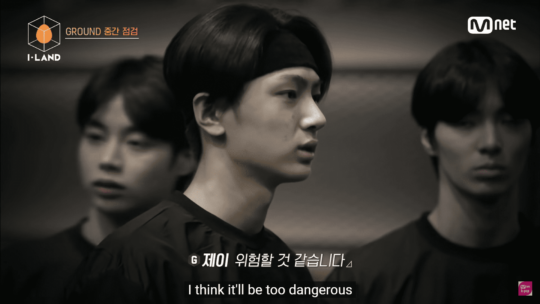 It’s a shame that the Grounders didn’t just practice the part. Yes, it could be potentially dangerous, but you know what’ll make it less dangerous? Practice! And avoiding it won’t make it magically disappear either, so it makes sense to me why Rain isn’t having any of it. 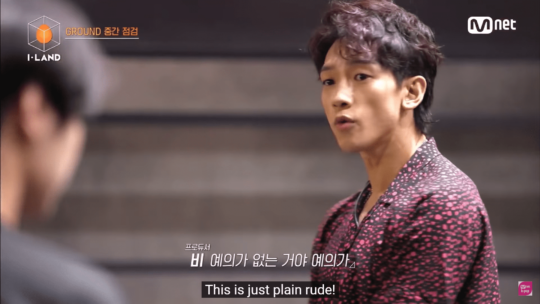 Taeyong is the one who caught my eye this round, or rather, my ears. His vocals just attracted my attention, and I remembered him from being the guy who has to get stepped on three times throughout the whole dance. It is admirable how accepting he is of his situation and spins it into a positive thought. His turn-lemons-into-lemonade outlook is needed to balance out the blunter personalities within the team. The Producers and Directors find that the I-Landers did better than they expected and also paid more attention to their facial expressions. In particular, Heeseung’s ending shot catches their attention, especially for the intensity in his eyes.

Watch the latest episode of “I-LAND” with English subtitles here:

Were you as amused by Hanbin as I was? And do you think they approached IU to sing the signal song because IU and “I-LAND” share the same “I”? Let us know your thoughts on episodes 2 and 3 below!

Belinda_C confused Jay and Daniel in the first episode. She only figured out who was who in the second episode. Ooops. Talk SEVENTEEN and Shinhwa with her on Twitter!