On August 13, Gaon Chart announced that Kang Daniel had officially achieved a triple crown for the week of August 2 to August 8 after topping three separate charts.

The singer’s new mini album “MAGENTA” debuted at No. 1 on this week’s physical album chart, while its accompanying title track “Who U Are” claimed No. 1 on both the digital download chart and the BGM chart (which tracks the songs that people purchase to use as background music for their blogs and KakaoTalk profiles).

Meanwhile, SSAK3 earned a double crown after their debut title track “Beach Again” remained No. 1 on both the overall digital chart and the streaming chart for the third consecutive week.

Finally, BLACKPINK continued their reign over Gaon’s Social Chart 2.0 for the 11th week in a row.

Kang Daniel’s “MAGENTA” and (G)I-DLE’s “DUMDi DUMDi” entered the physical album chart at No. 1 and No. 2 respectively this week. ATEEZ’s “ZERO : FEVER Part.1,” which debuted at No. 1 on last week‘s chart, stayed strong at No. 3, followed by Red Velvet – Irene & Seulgi’s “Monster” at No. 4. Finally, Baek Yerin’s “Every letter I sent you” rounded the top five for the week. 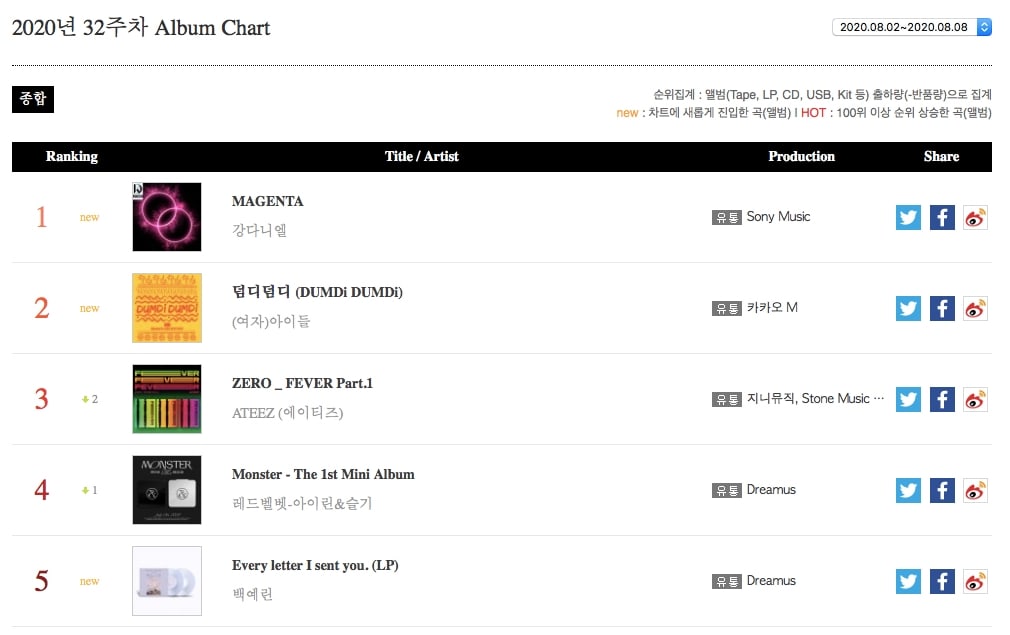 Kang Daniel also topped this week’s digital download chart with his new title track “Who U Are.” SSAK3 swept the next three spots on the chart: Lee Hyori’s solo song “Linda” (featuring Yoon Mi Rae), which she released under the name Linda G, claimed No. 2; Rain’s solo song as B-Ryong, “Let’s Dance” (featuring MAMAMOO), came in at No. 3; and SSAK3’s “Beach Again” charted at No. 4. Finally, (G)I-DLE’s new single “DUMDi DUMDi” entered the chart at No. 5. 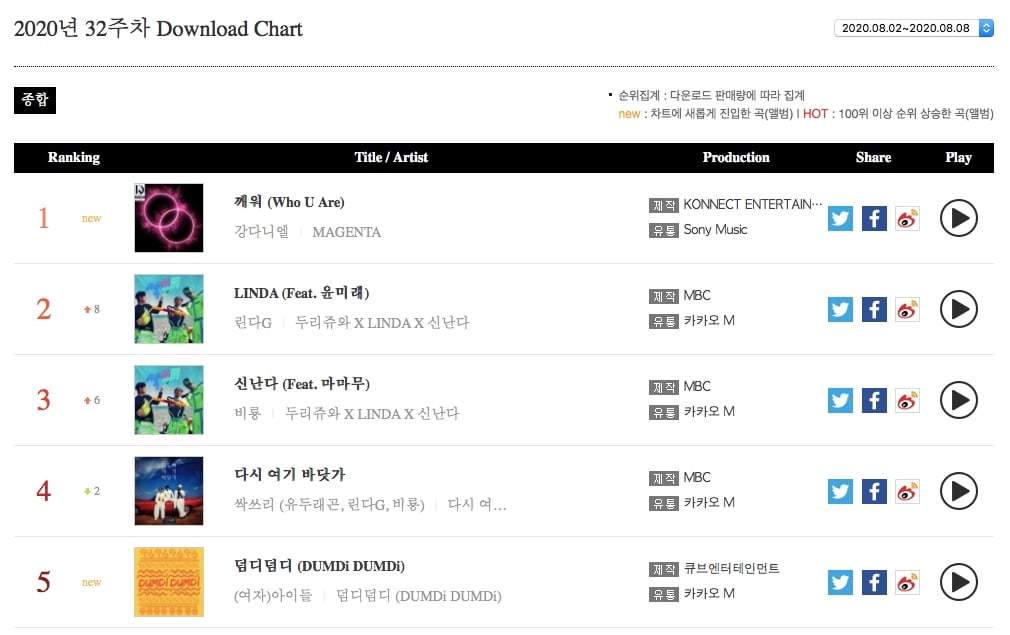 SSAK3’s “Beach Again” held onto its spot at No. 1 on the overall digital chart for the third week in a row, while their relatively newer song “Play That Summer” similarly maintained its position at No. 2. MAMAMOO’s Hwasa‘s “Maria” also managed to hold on its spot at No. 3 on the chart, followed by Linda G (Lee Hyori)’s “Linda” at No. 4 and BLACKPINK’s “How You Like That” at No. 5. 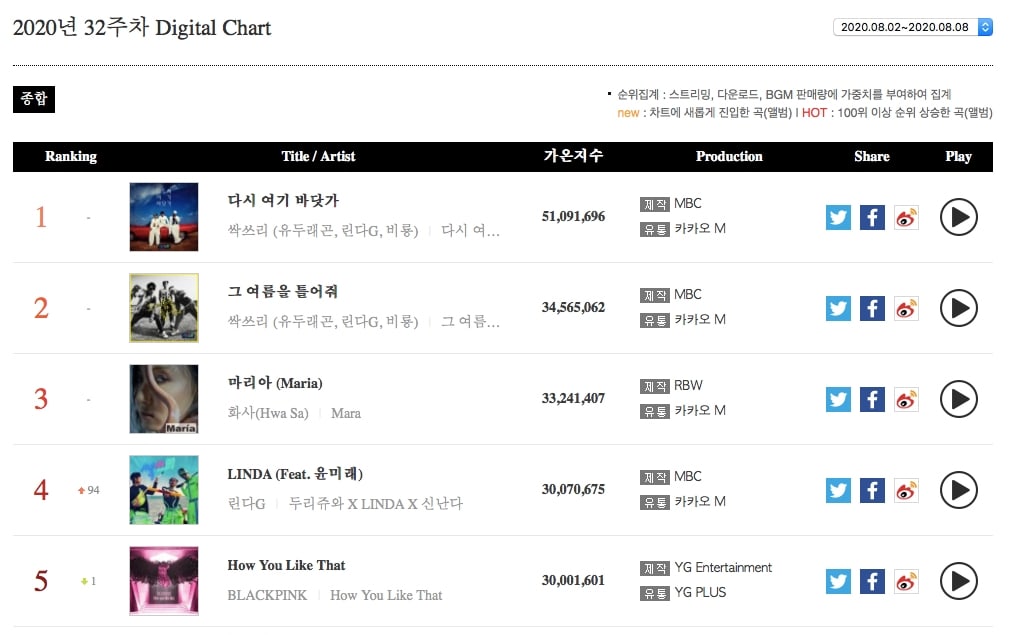 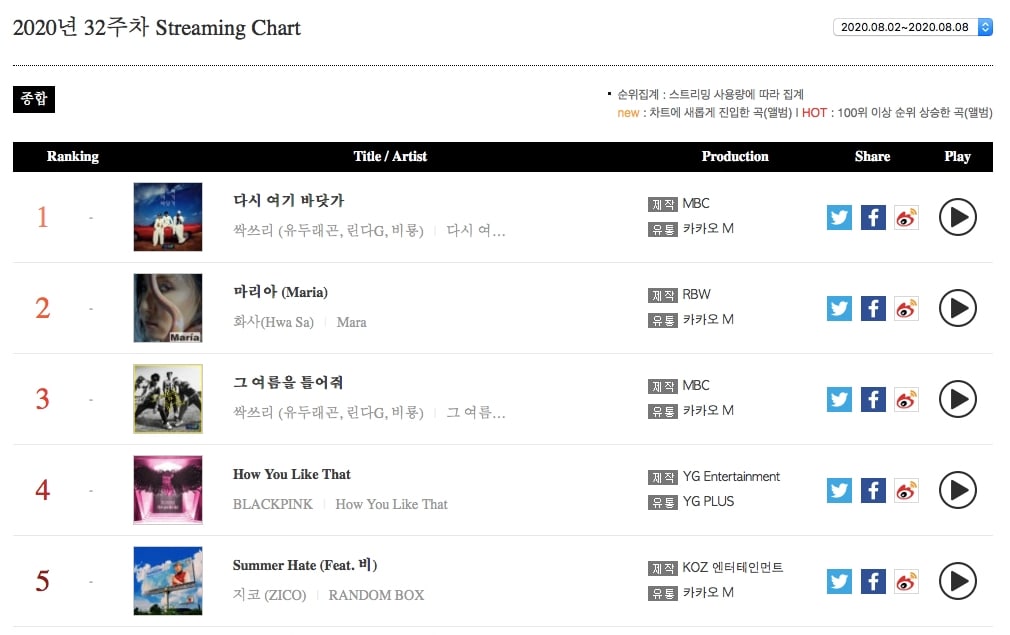 BLACKPINK remained No. 1 on Gaon’s Social Chart 2.0 for the 11th consecutive week, followed by trot singer Im Young Woong at No. 2 and BTS at No. 3. Yang Joon Il rose to No. 4 on this week’s chart, with APRIL rounding out the top five for the week. 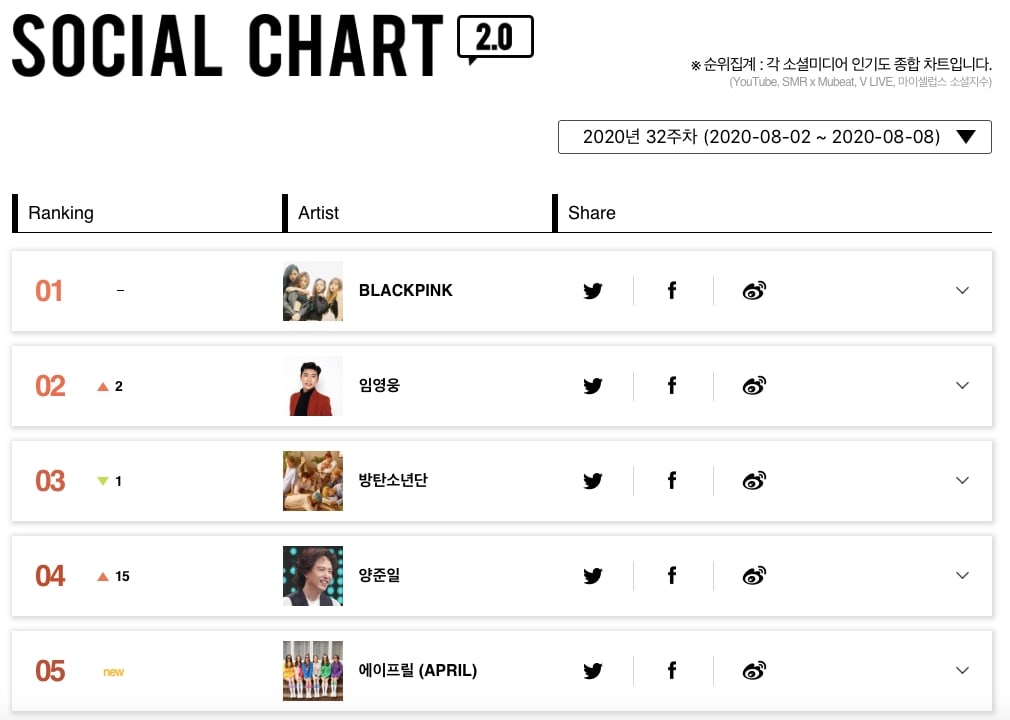 Watch SSAK3 on the latest episode of “How Do You Play?” below: