ATEEZ’s new mini album “ZERO : FEVER Part.1” debuted at No. 1 on the physical album chart for the week of July 26 to August 1.

Meanwhile, EXO-SC claimed two of the top five spots this week: not only did their studio album “1 Billion Views” come in at No. 2, but the Kit version of the album also charted separately at No. 5. 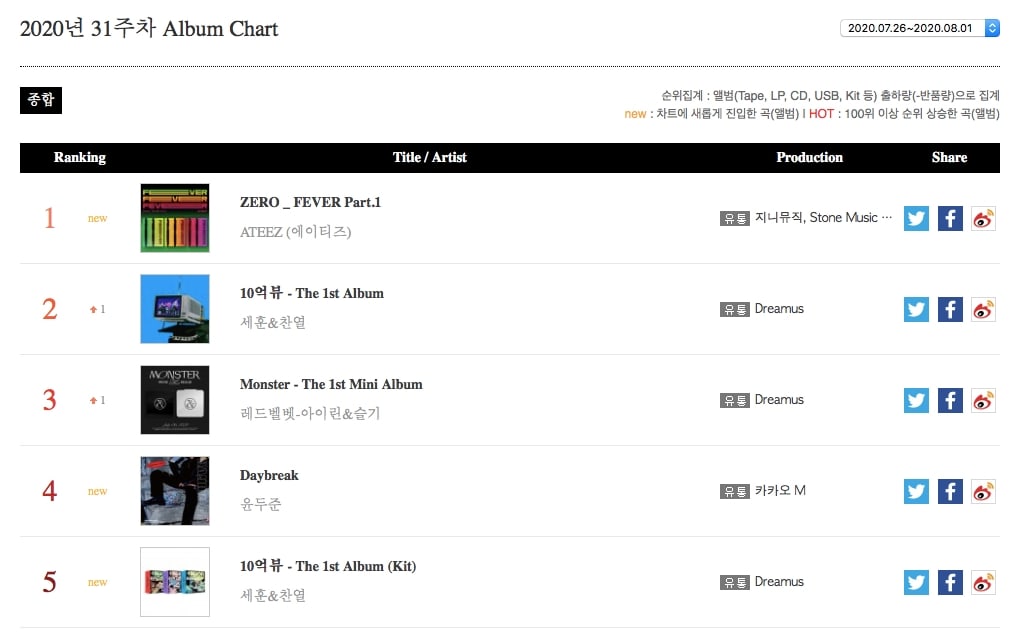 EXO-SC’s “1 Billion Views,” which previously debuted at No. 1 on Gaon’s weekly chart, topped the physical album chart for July. BLACKPINK’s special edition of “How You Like That,” which topped last week‘s weekly chart, came in at No. 2 for the month.

Notably, ATEEZ’s “ZERO : FEVER Part.1” debuted at No. 3 on the monthly chart, despite having been released right before the end of the month on July 29. Red Velvet–Irene & Seulgi’s “Monster” charted at No. 4, and SEVENTEEN’s “Heng:garæ” rounded out the top five for July. 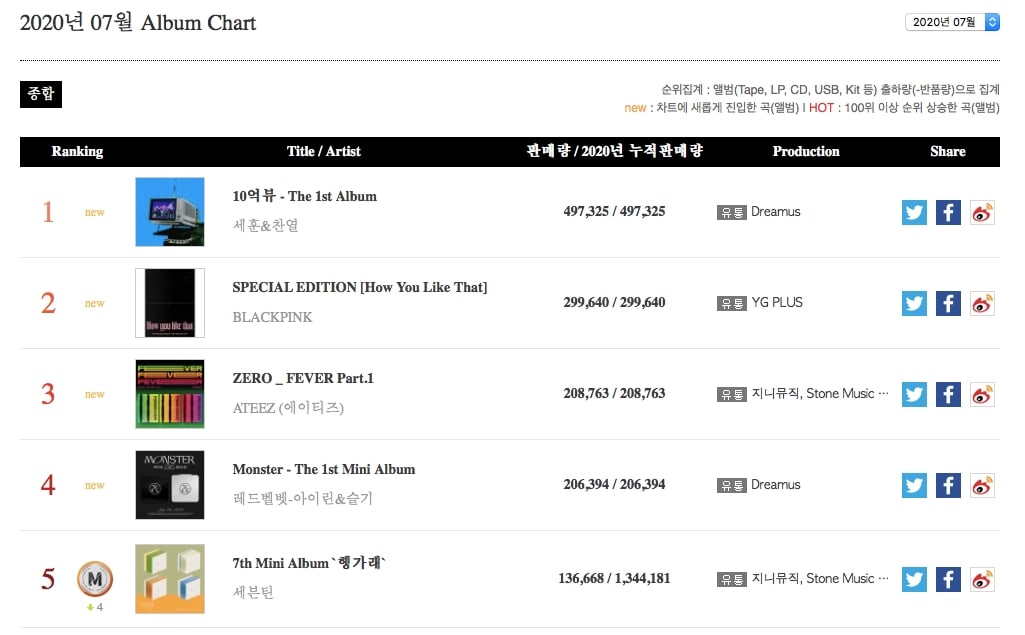 SSAK3 achieved a triple crown after sweeping all three of this week’s digital charts, including the overall digital chart, which they topped with their debut track “Beach Again.” In addition to maintaining No. 1 on the chart with “Beach Again,” SSAK3 also claimed No. 2 with their relatively newer song “Play That Summer.” 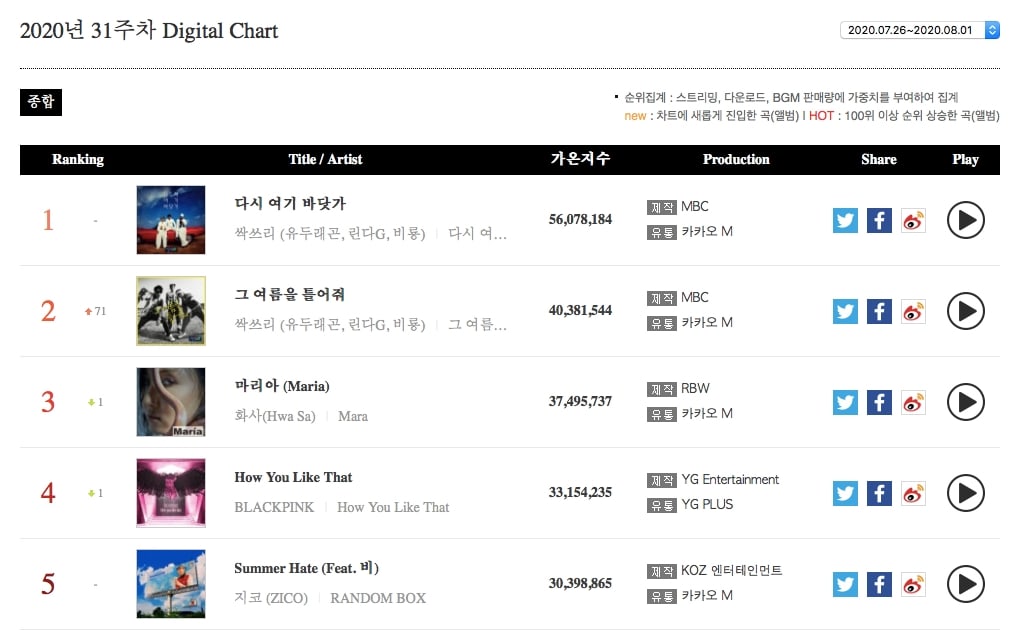 BLACKPINK earned a triple crown on the monthly charts, claiming No. 1 on the overall digital chart, streaming chart, and social chart for July. 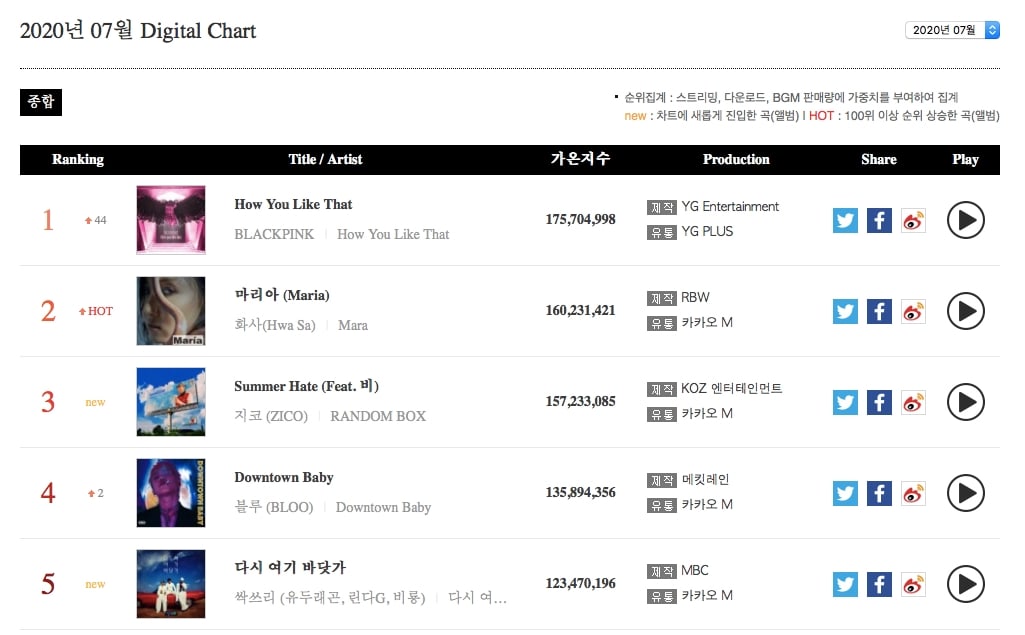 SSAK3 also claimed both of the top two spots on this week’s digital download chart, with “Play That Summer” rising to No. 1 and “Beach Again” coming in at No. 2.

EXO’s Baekhyun’s new cover of BoA’s “Garden in the Air” debuted at No. 3 on the chart, while Lee Hi’s “HOLO” held onto its spot at No. 4. Finally, Kang Daniel’s pre-release track “Waves” (featuring Simon Dominic and Jamie) rounded out this week’s top five. 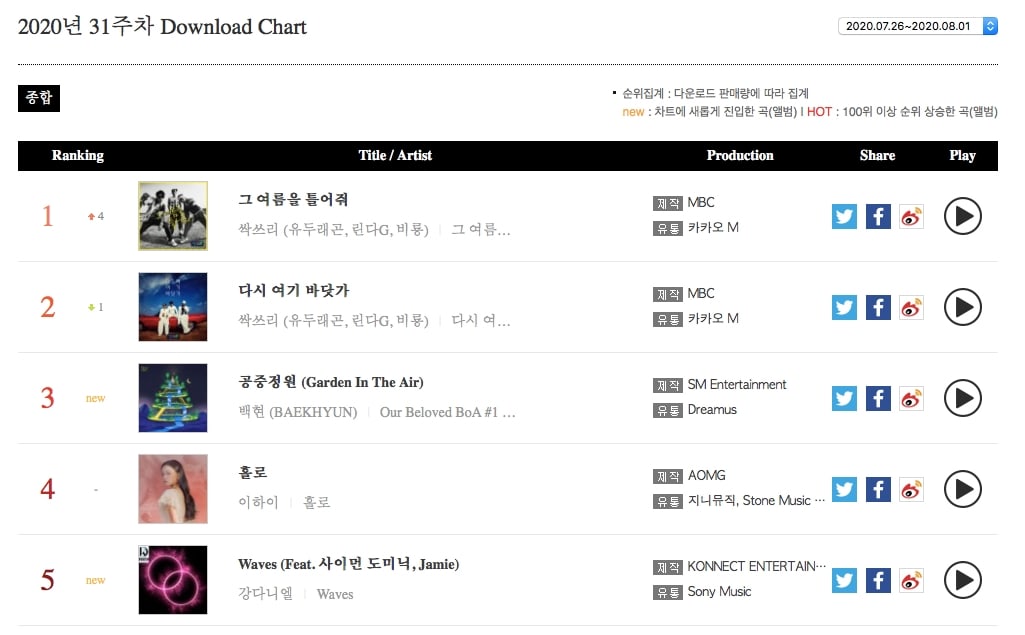 SSAK3 took both No. 1 on this month’s digital download chart with “Beach Again” and No. 5 with their remake of “In Summer.” Hwasa’s “Maria” rose to No. 2 for July, followed by Zico’s “Summer Hate” at No. 3 and BLACKPINK’s “How You Like That” at No. 4. 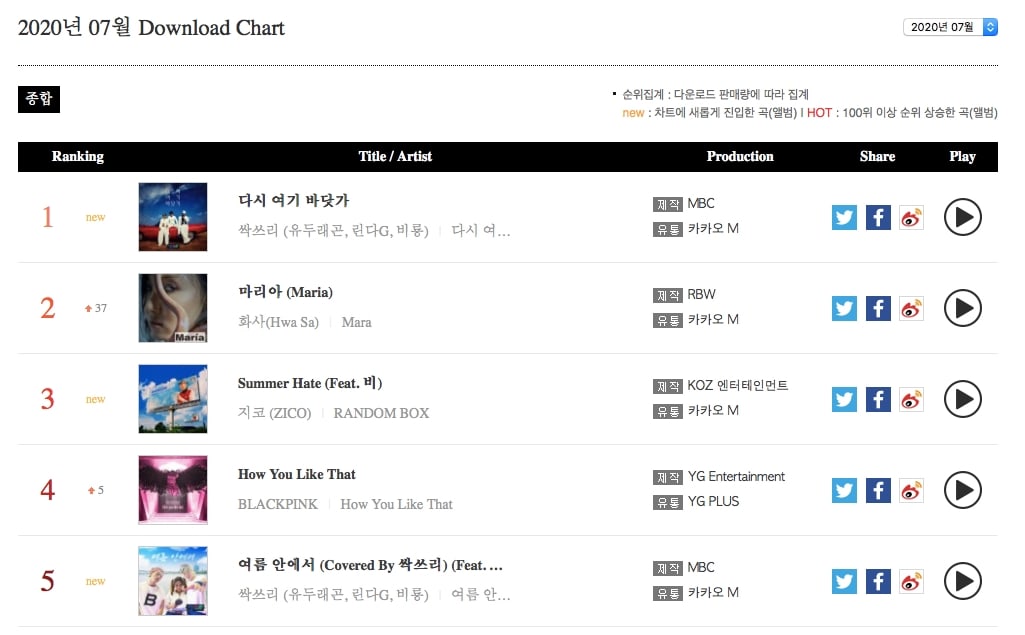 SSAK3 held onto their spot at No. 1 on the streaming chart this week with “Beach Again,” while their newer song “Play That Summer” shot up to No. 3. Hwasa’s “Maria” maintained its position at No. 2, with BLACKPINK’s “How You Like That” and Zico’s “Summer Hate” rounding out the top five at No. 4 and No. 5 respectively. 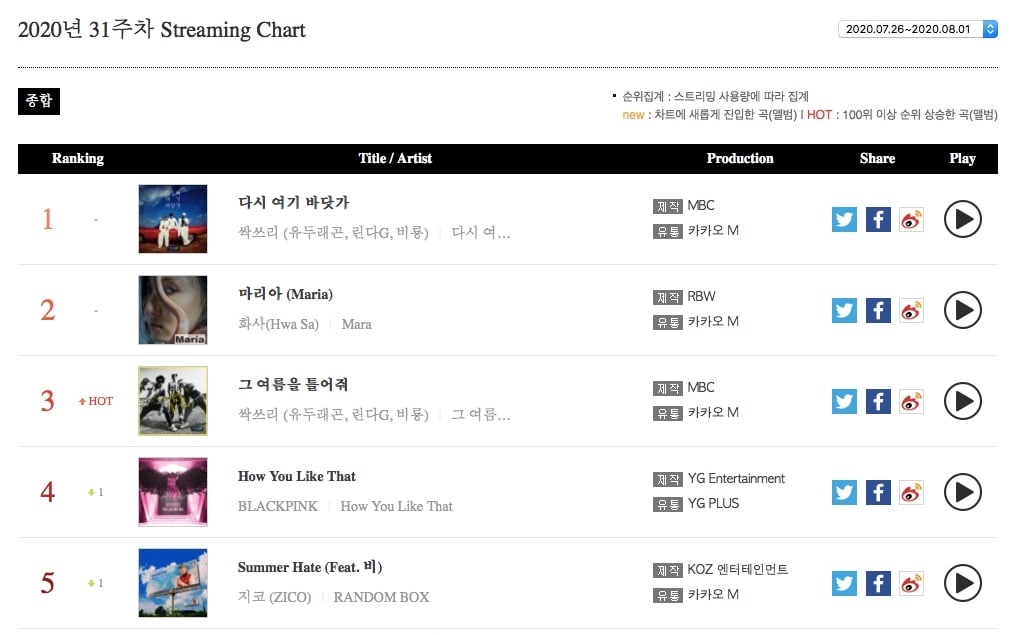 BLACKPINK’s “How You Like That” came in at No. 1 on the streaming chart for July, with Hwasa’s “Maria” rising to No. 2 and Zico’s “Summer Hate” entering the chart at No. 3. BLOO’s “Downtown Baby” charted at No. 4, while IU’s “eight” (produced by and featuring BTS’ Suga) followed at No. 5. 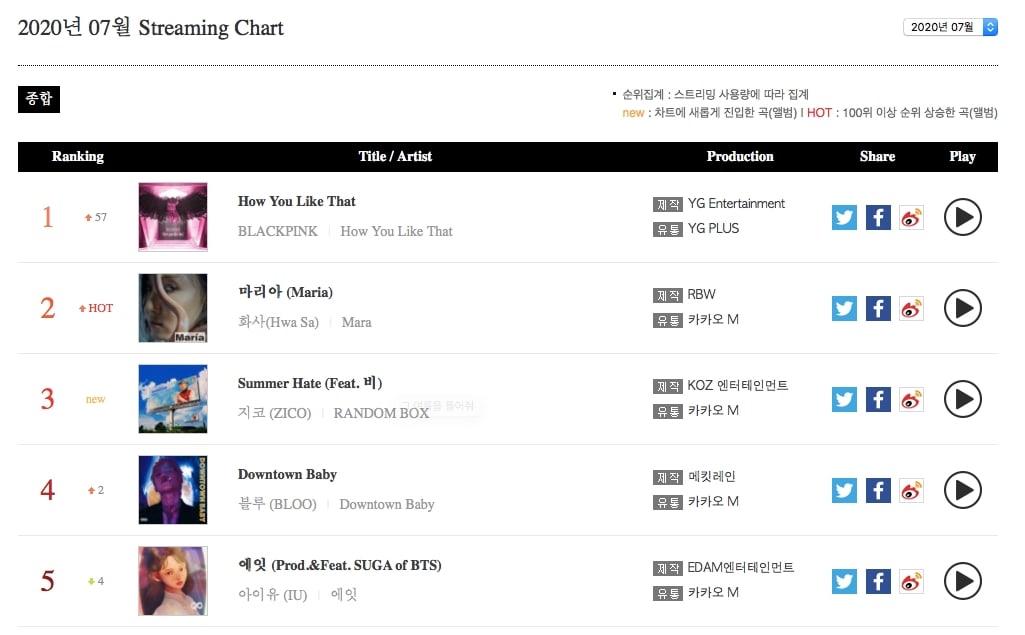 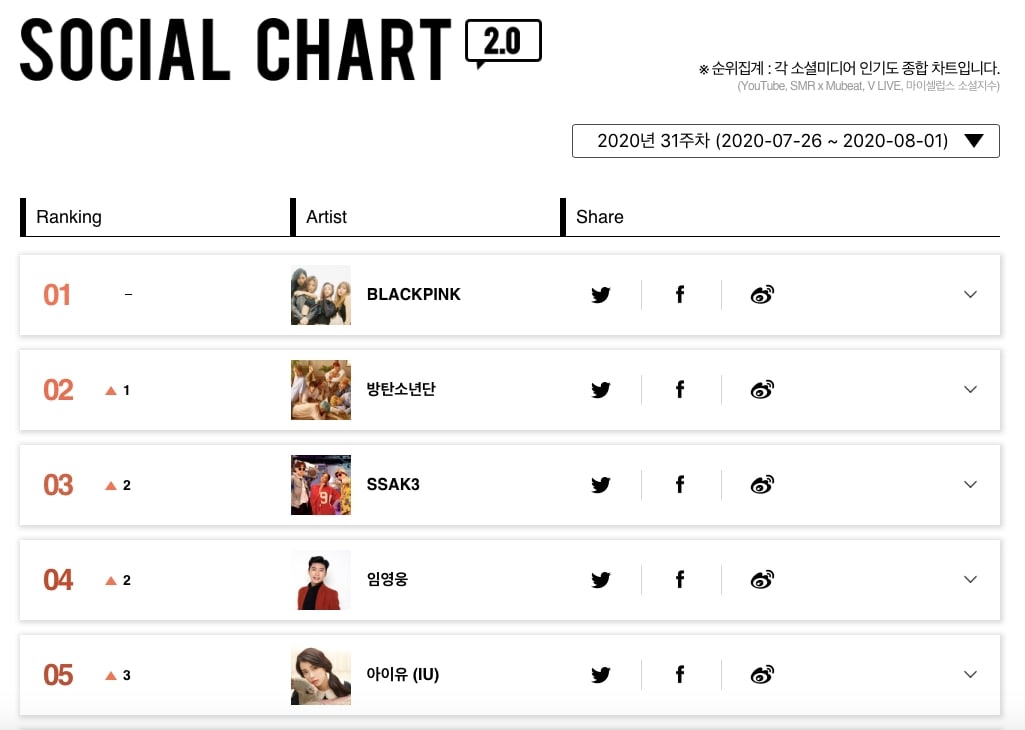 BLACKPINK also continued their reign over Gaon’s monthly Social Chart 2.0 for the third consecutive month, followed by trot singer Kim Ho Joong at No. 2 and BTS at No. 3. SSAK3 entered the chart at No. 4, and Im Young Woong rounded out the top five for July. 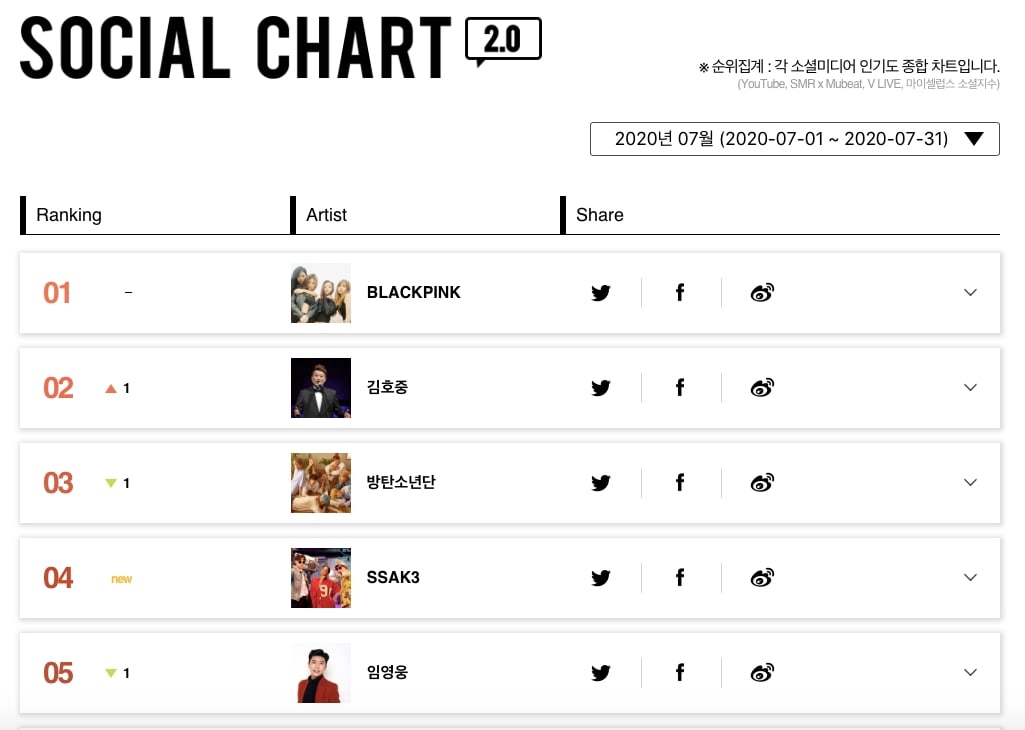 Watch SSAK3 on the latest episode of “How Do You Play?” with English subtitles below!