We officially ring in the second part of the show with episode 7 and start off by learning which 12 trainees successfully made it into part two. And by the end of episode 8, another trainee is eliminated, leaving us with just the 11. Somewhere in between, we also have multiple performances, hardships and struggles, and… oh yes, BTS.

So let’s dive right in and see what happened during these past two weeks:

Warning: Major spoilers ahead! Like seriously, massive spoilers, so run while you still can!

First off, the show introduces the remaining six I-Landers. In order of their appearance, we have Sunghoon, Jungwon, Heeseung, Jay, Jake, and K. Then out of the 16 Grounders, global voters choose to save (in order of received votes) Sunoo (with 2.6 million votes), Daniel, Ni-ki, Geonu, Ta-ki, and finally, Hanbin (with Nicholas and Kyungmin coming next in votes).

Kyungmin is adorably surprised to hear his name called.

Must say I’m surprised that Hanbin made it through, given that he was stuck in Ground the whole of part one, but this again proves the power of votes. His fanbase is dedicated enough to secure him a spot in the final 12, pushing him through when it counts the most, and that’s all that matters! Give yourselves a pat on the back for all the voting.

We also learn that moving forward, there will be four more tests and the focus has now shifted to individual competition (Goodbye “shared destiny”). The panel now consists of Doobu, Son Sung Deuk, Pdogg, Wonderkid, and Bang Si Hyuk, so that means other than saying goodbye to 11 trainees, we also say goodbye to Rain and Zico (which makes sense since Zico’s in the military at this very moment). The first and third tests will be evaluated by the panel, whereas the second and fourth tests will be scored by global viewers. Again, with the panel’s input, this could be a good way of controlling the talent pool and avoid having trainees coast in on popularity alone, so this would make a good balance.

Speaking of viewer votes, the ranking as of episode seven is as follows (from first to twelfth): Sunoo, Daniel, Heeseung, Sunghoon, K, Jay, Jungwoon, Jake, Ni-ki, Ta-ki, Geonu, and finally, Hanbin. Seven trainees are slated to debut, so Sunoo till Jungwoon are given newly made badges indicating their “Top 7” status. 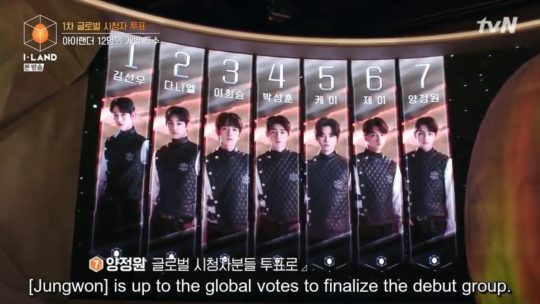 Oh, and everything in “I-LAND” is now numbered and ranked. The room for the top three ranking I-Landers have bigger beds, an arcade machine, even snacks. The top ranking trainee even has his own massage chair and a bed that folds into a Transformer (or so I assume).

A visit from BTS

In episode 7, BTS also makes their much-awaited appearance on “I-LAND.” The megastars take a tour around the state-of-the-art building, hilariously struggling with removing the magnetic name plates (Suga), helping themselves to the snacks in the pantry (Jungkook), and proving how diligently they’ve been watching the show (J-Hope).

BTS also takes some time to answer some of the concerns the I-Landers have. Some are sillier than others — like how to avoid frown lines and how to stop creating embarrassing moments (yes, that one’s from Jay) — whereas others like Ta-ki’s (missing home) and Sunoo’s (health concerns) run a little deeper, and BTS gives some useful advice stemming from their own experience. After the counseling segment, BTS then showers them with gifts before getting to the main point of their visit — kicking off the first test for second part of the show.

Some I-Landers (creepily) sniffing the pillows that BTS touched. Lol!

After BTS announces the start of the first test — performing three BTS songs — they also share some pointers and what they have to pay attention to for each song. Then the video ends, and the Egg Gateway starts revolving and reveals… not BTS (lol!). Instead, it’s choreographer Bae Yoon Jung and Son Sung Deuk who are there to deliver a mini-mission. The 12 I-Landers are to go head to head in a dance battle where three winners will be chosen.

They don’t air all the battles, but of what we do see, K’s and Jungwon’s are particularly fun to watch. Both do freestyle really well, and they show off slick moves that capture the nuances of the songs. Ta-ki goes with his forte, locking, and the room whole room buzzes with energy. The two adults apparently feel the same and announce that the winners are Ta-ki, K, and Jungwon (in that order).

The three winners then become the three leaders for the first test, and they get to choose either their song first or their members first. Ta-ki decides to choose his members first, allowing K and Jungwon to avoid the hardest song of the bunch (due to the high vocal range), “Fake Love,” and go with “DNA” and “I NEED U” respectively.

For his team, Ta-ki chooses Heeseung, Sunghoon, and Sunoo, who are all top rankers. Unfortunately, Ta-ki himself is the one who struggles the most during the test, buckling under the pressure of being in the leadership role, not being able to get the rhythm of the dance right, and not being able to hit those high notes (puberty can be unforgiving). After receiving harsh feedback during their mid-point evaluations, Heeseung steps in and helps Ta-ki in leading the team and gives each member individualized help.

Team “DNA” consists of four strong performers: K, Ni-ki, Jay, and Hanbin. But with four strong performers (who are used to doing things their own way) also comes conflict. Ni-ki adds in his own move (mirrored after BTS’s V’s own move) to the choreography without informing anyone else, and this doesn’t sit well with K. He tells Ni-ki off and even calls him into a dressing room with no cameras (but the audio is still on) and reprimands him for not putting the team’s interest first. Ni-ki removes the “V move” in the next few practices but slips it in again during the mid-point evaluations, which earns him another telling-off from panel member Son Sung Deuk.

Things are a little tense within the team (and you know it’s tense when Jay turns out to be the quiet one), so warm-hearted Hanbin takes on the mediator role and encourages Ni-ki to voice out his feelings. K also takes the initiative to heal the relationship, and soon we see them close again.

Compared with the other two teams, team “I NEED U” — consisting of Jungwon, Geonu, Jake, and Daniel — turns out to be the “overlooked” team. Jungwon disregards this identity and says they’ll just overtake everyone from behind, which will be even more of a success story. Unfortunately, that’s not exactly how their story unfolds. In fact, the show doesn’t even show their mid-point evaluation. *Shakes fist at show*

The feedback we do see is that the boys are unable to properly convey the mood of the song. Instead of portraying grief and yearning, the boys give off unnecessarily cool and sexy vibes, so we see them spend extra time trying to correct this area.

Team “DNA” is called up to perform first, and before they go up, we are treated to this hilarious moment courtesy of Hanbin:

Ni-ki: “We have no rivals!”
A very wide-eyed, alarmed Hanbin: “We are singing live!”

In Korean, the English words “live” and “rival” are both pronounced with three syllables, so they sound similar.

The panel finds the “DNA” performance refreshing to watch and notes that they all did well in general, though they could work on looking more natural in the future. Their score comes in at 287 (out of 400).

Team “I NEED U” performs next, and the panel comments that although there is overall improvement, they still performed below expectations. Though having spent time working on portraying the right moods, they still don’t manage to impress the panel. The team’s score comes in at 275. Notably, we also hear the panel saying that Jungwon hard carried for the team, and his individual score is the reason their team score isn’t any lower. This again proves what the panel discovered in part one, and it’s that Jungwon is born for the stage. While he doesn’t necessarily get as much screen time, his stage presence is a whole other story, always producing impactful performances and high scores.

Finally, team “Fake Love” takes the stage, and though they had worries about the high notes, I personally didn’t hear anything off, with Heeseung and Sunoo especially sounding comfortable in that range. Oddly, Sunghoon is supposed to be one doing the contemporary dance in the beginning, and we see him do so all the way up to the day of the actual performance, which then suddenly switches to Heeseung in the final performance. We don’t see any backstory to this switch though, which is… odd, given the show’s tendency to milk the last-minute switches for drama.

The panel enjoys this performance the most and showers them with positive feedback… except for Ta-ki, who they feel is unable to keep up with the other three. They receive a 306 for their team score, placing them in first place. This also means that their team is safe from elimination.

And then there were 11

In a way, Ta-ki literally saved himself throughout this whole test. By placing first in the mini-mission, he was able to pick his members first, and his members’ scores are what boosted the team score, thus allowing him to be safe from elimination. There are debates on whether Ta-ki made the wrong move by picking members over songs first, but the results speaks for themselves. It sucks for Geonu, but as is life, some things are just beyond our control.

With Geonu now gone, the I-Landers are down to 11, with four more destined to be on the chopping block. And after all that we’ve seen, Geonu strikes me as one of their stronger, if not strongest, vocalists. Which raises the question: who are the standout vocalists of the remaining I-Landers? I’m not saying that there aren’t any strong vocalists in the bunch, but rather we haven’t seen enough to determine who is main vocalist material. Yet, we’re able to easily identify the strong dancers because we’ve seen the dancing and performance aspects highlighted again and again. In fact, the panel now solely consists of “performance directors,” and correct me if I’m wrong, but there don’t seem to be any panelists who focus on vocals. Is the show putting too much weight on their performance and dance talents and not enough on their vocal talents?

Finally, here are the rankings (global voting) as seen at the end of episode 8: In first place we have Sunoo, followed by Heeseung, Sunghoon, Ta-ki, Jake, Jungwon, Daniel, Hanbin, K, Ni-ki, and Jay in eleventh place. Voting closes at midnight KST on August 29.

Are you happy with the Top 12 (now Top 11)? Do you also think that the show needs to highlight the vocal aspects of the trainees more? And does anyone else find it strange that Namgoong Min was MC-ing the first test remotely? Let us know in the comments below!

Belinda_C is most bummed about not seeing Rain anymore. Give me back my curly-haired Rain please! Talk SEVENTEEN and Shinhwa with her on Twitter!