On the August 29 episode of MBC’s “How Do You Play?”, all the members of Refund Expedition and Jimmy Yoo met in the same room for the first time.

Refund Expedition is a project girl group composed of Lee Hyori, MAMAMOO’s Hwasa, Jessi, and Uhm Jung Hwa. The group came together after Lee Hyori named the other three members as her dream girl group during promotions for SSAK3. Jimmy Yoo is Yoo Jae Suk’s nickname as the general producer of Refund Expedition.

Last week, Yoo Jae Suk watched the video of Refund Expedition’s first meeting together and had an individual meeting with each of the members.

This week, the episode began with Yoo Jae Suk interviewing potential managers for Refund Expedition. The first person to be interviewed was Yang Se Chan, who had been recommended by his older brother Yang Se Hyung. However, Yang Se Chan was not informed of the reason he was coming in for an interview and immediately rejected the offer when he heard who the members were. 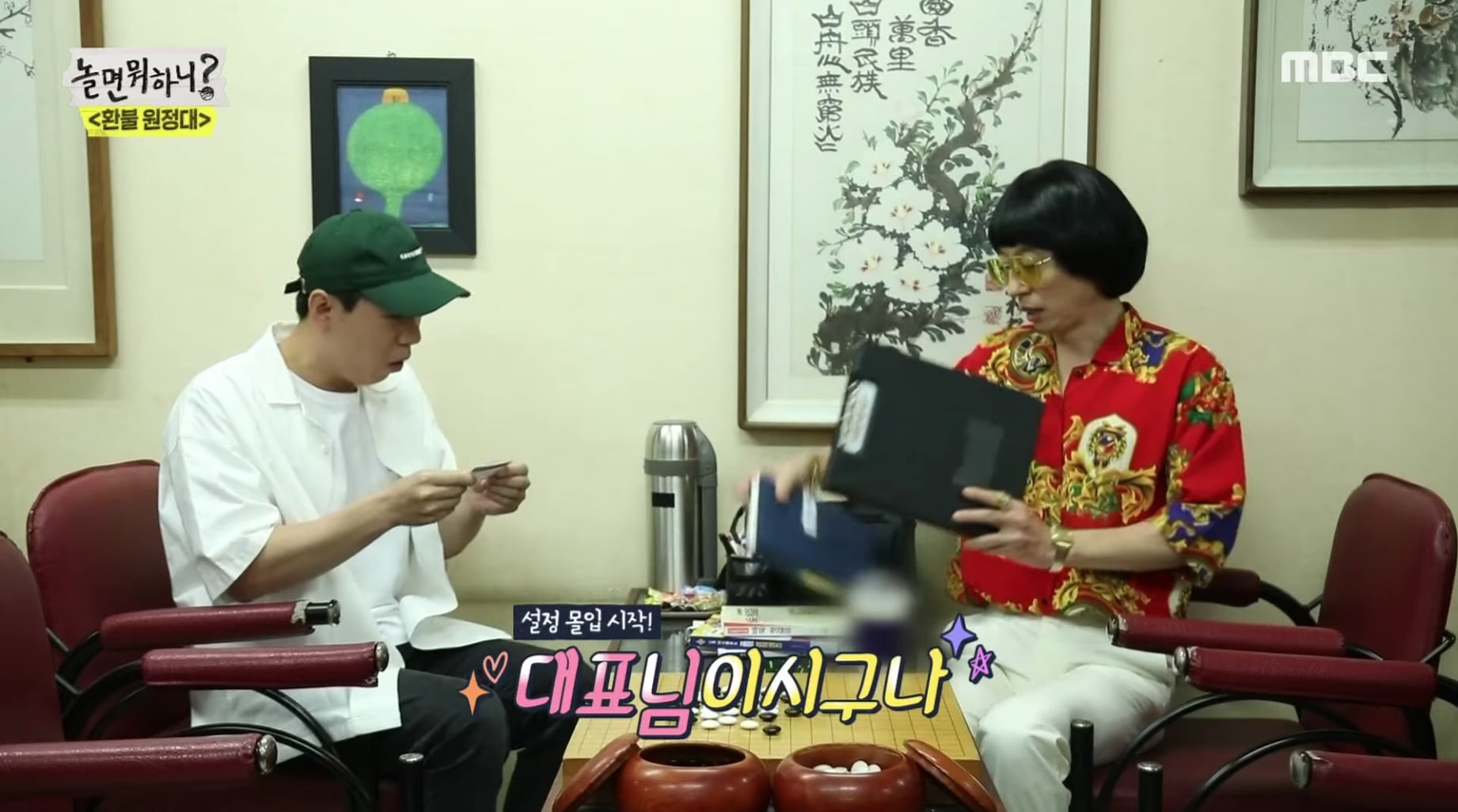 “I don’t want to be the manager at all,” he said. “I thought about it for a moment and I don’t think I can drive a car if Lee Hyori, Uhm Jung Hwa, Jessi, and Hwasa are in it. We can’t communicate at all. I can’t communicate with Jessi because I’m not good at English. Jessi doesn’t get along with me and I don’t get along with her either. We’re not a good fit. We’re two opposite extremes.” 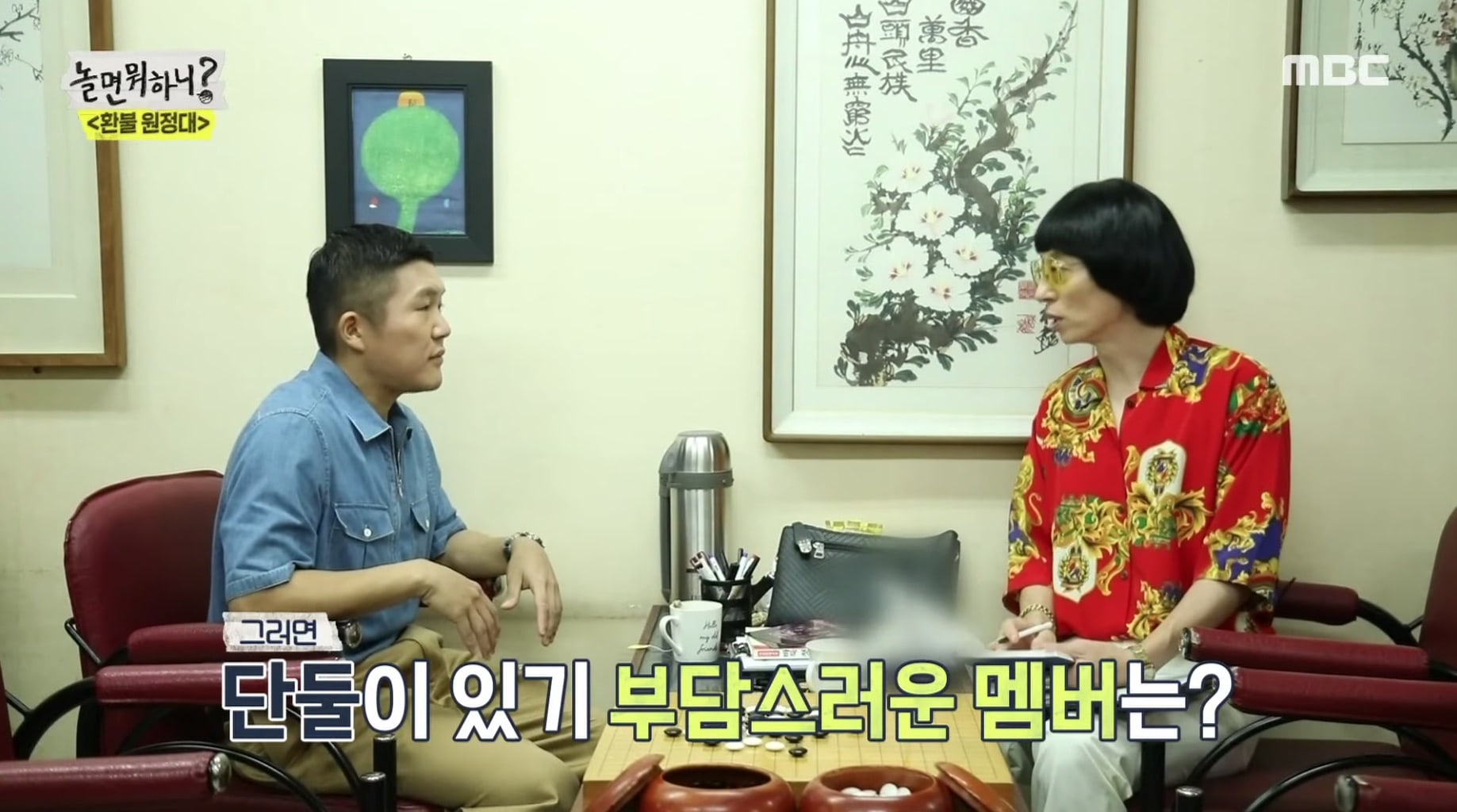 The second person to be interviewed was Jo Se Ho, who commented, “I don’t think it will be easy with those members.” Despite his initial unease, his attitude changed and he became enthusiastic about the business. “I’m good at being handled by strong people,” he said. About his ideal pay, he said, “I can do it for free, like volunteer work.” He added, “I’ll take the 50,000 won and signatures for the rest. I would like some free merchandise.” However, he had trouble understanding what was going on and Jimmy Yoo sent him out in exasperation. 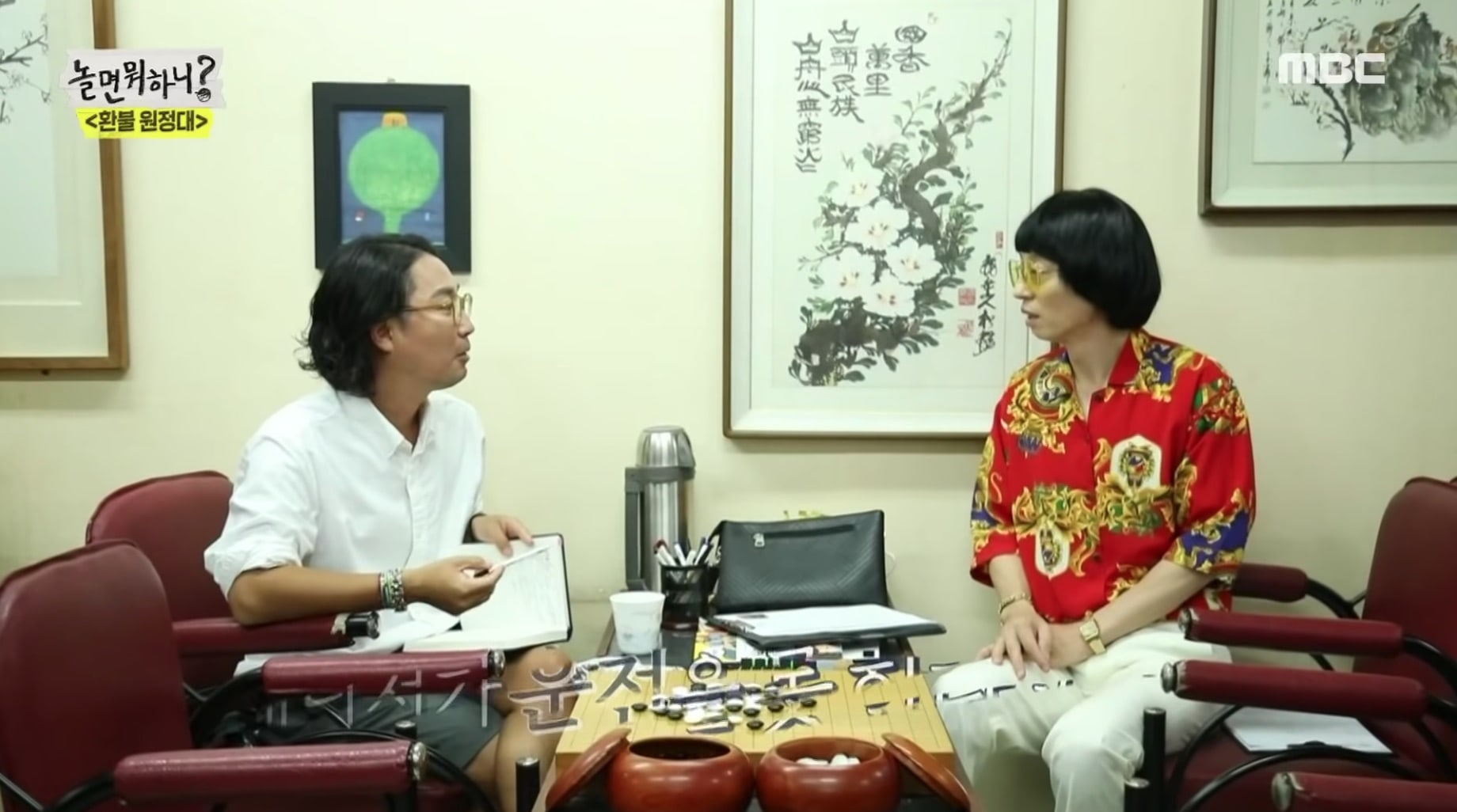 The third person to be interviewed was Jung Jae Hyung, who was recommended by his agency CEO, Yoo Hee Yeol. He had thought that he was being interviewed for a producer position and was taken aback to learn it was for a manager position. He tried calling Yoo Hee Yeol, but got told that this was an unlisted number.

As soon as he saw the members’ photos, Jung Jae Hyung said, “I can’t do this. They’re scary.” Asked about his ideal pay, he got more interested and said, “1,600,000 won [about $1360].” Jimmy Yoo was impressed by Jung Hae Hyung’s music skills but soon came across a fatal flaw: Jung Jae Hyung didn’t have a driver’s license. 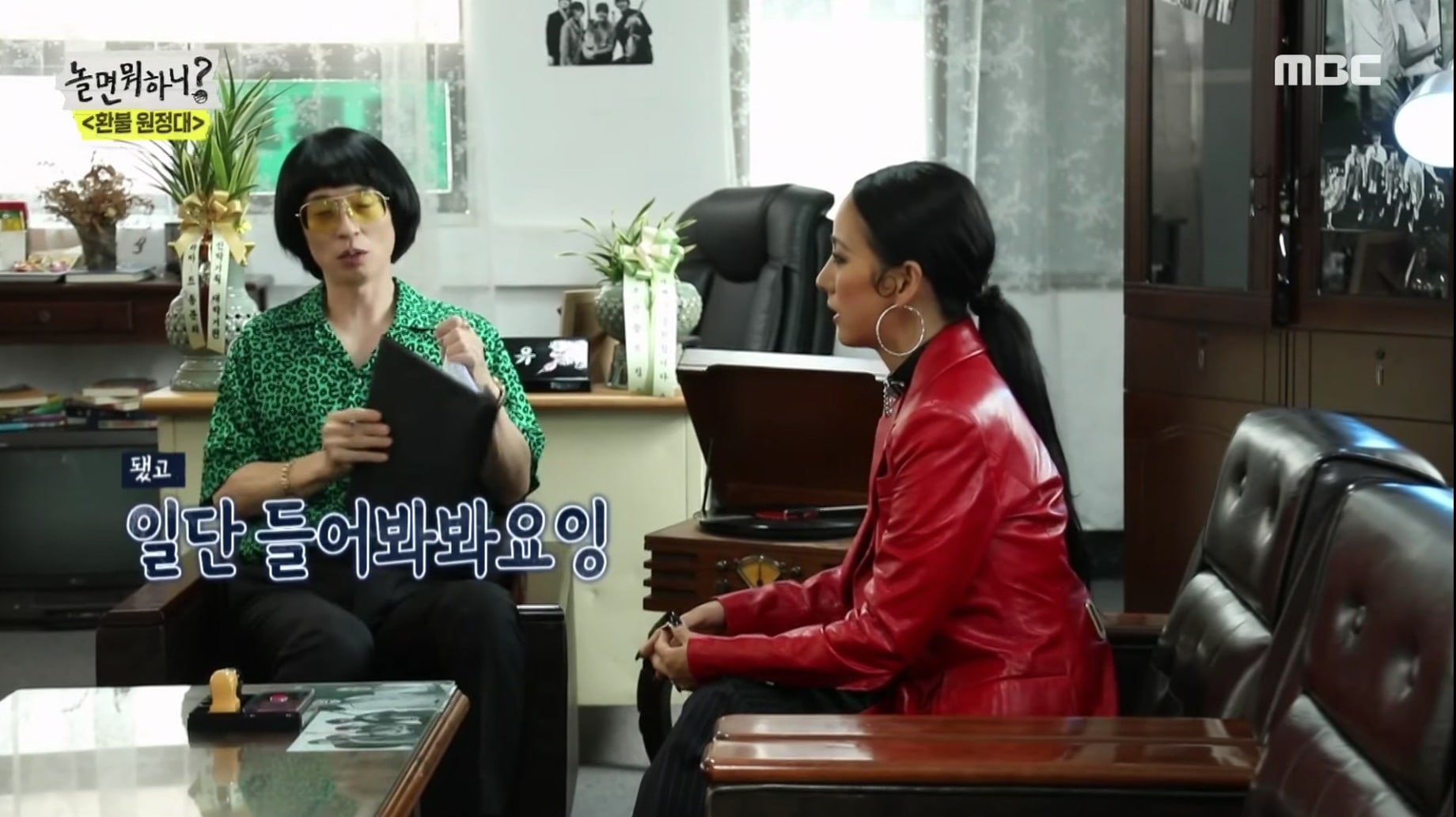 Before the first full meeting between Refund Expedition and Jimmy Yoo, Lee Hyori picked her stage name as “Lee Chun Ok.” She gave her age as 32 (she is 42 in Korean age) but couldn’t figure out when her birth year would be. Eventually she had to memorize, “Born in 1989, 32 years old, Year of the Snake.” The meaning of her stage name is “chun” (“heaven”) and “ok” (jade), to signify a child like jade coming down from the heavens. In other words, it was a good luck name for her attempts to conceive.

At the group meeting, Jimmy Yoo unveiled the girl group members’ contracts. These were tailored to the members’ individual interests after their personal meetings with Jimmy Yoo. For Lee Hyori, she would be allowed to cancel her contract on the day she got pregnant.

Lee Hyori said, “I have to be honest with the members. It’s a secret, but I’m preparing to get pregnant. I’m not married but we’re living together. It’s like a common-law marriage. [This is part of her stage persona’s backstory, not a reference to her real life.] If I get pregnant, our group has to end.”

For Uhm Jung Hwa, the condition that would end her contract was if she was forced into too tough a work schedule. For Hwasa, it was if meal times were not strictly observed. Jessi’s just said, “I can put up with anything if it’s just a month.”

Some of the suggested stage names for the other members included Silver (Hwasa), Kelly (Uhm Jung Hwa), and Eun Bi, Man Soo, Man Nyeon, Chun Nyeon, and Moo Kang for Jessi. As a method of settling disputes, Lee Hyori suggested that they go to a fighting ring and spar it out. 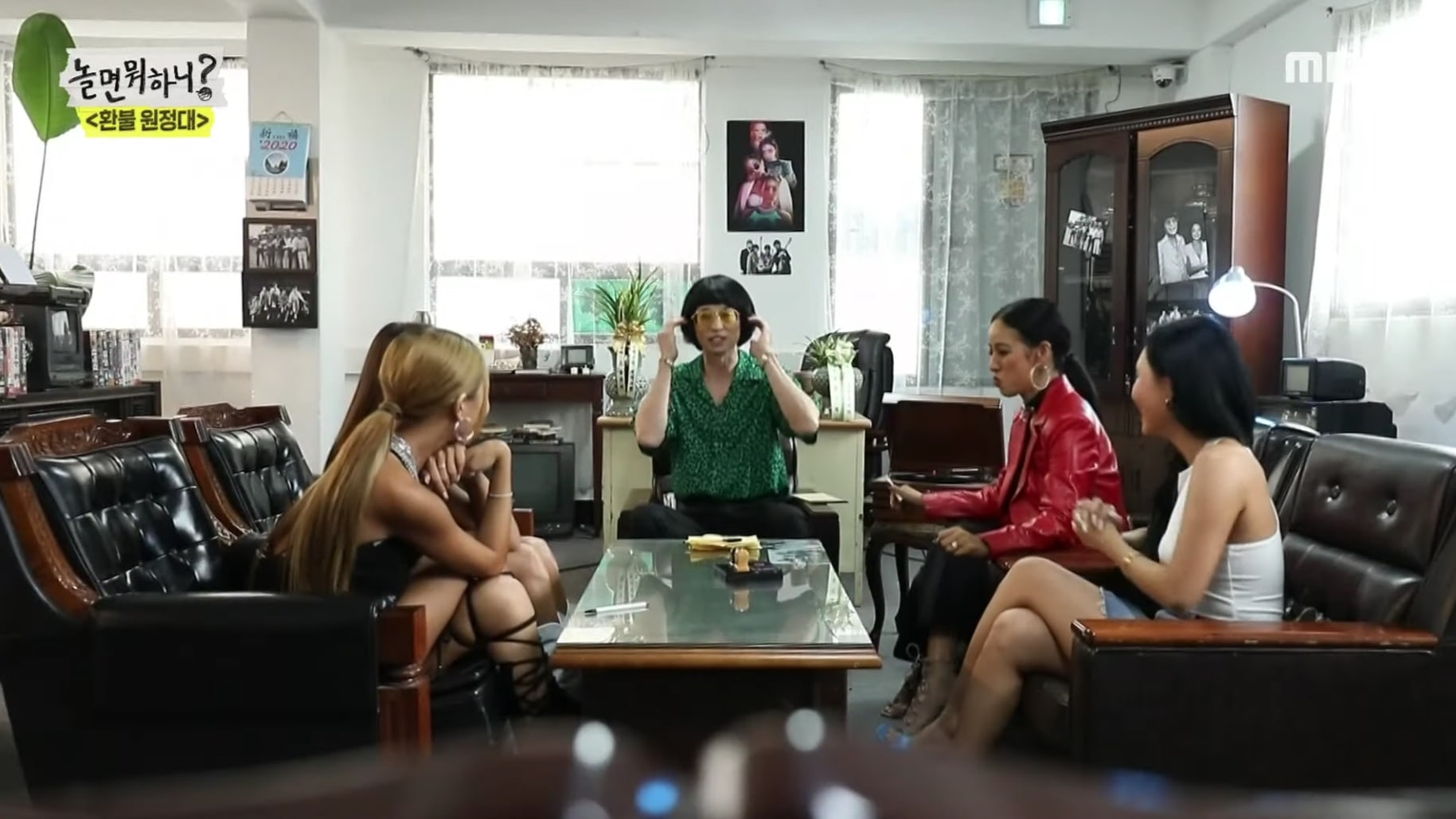 Check out “How Do You Play?” on Viki: