On the latest episode of JTBC’s “Ask Us Anything,” Girls’ Generation’s Seohyun cracked up the cast with some embarrassing stories!

The idol-turned-actress appeared as a guest on the September 12 broadcast of the variety show alongside Go Kyung Pyo, her co-star from the upcoming drama “Private Lives.”

During the show’s signature guessing-game segment, Seohyun asked the cast to guess the “extremely memorable experience she had while driving.” After a few hints, Super Junior‘s Kim Heechul jokingly asked if she’d used an umbrella while driving in a convertible in the rain—but to everyone’s shock, that turned out to be the correct answer. 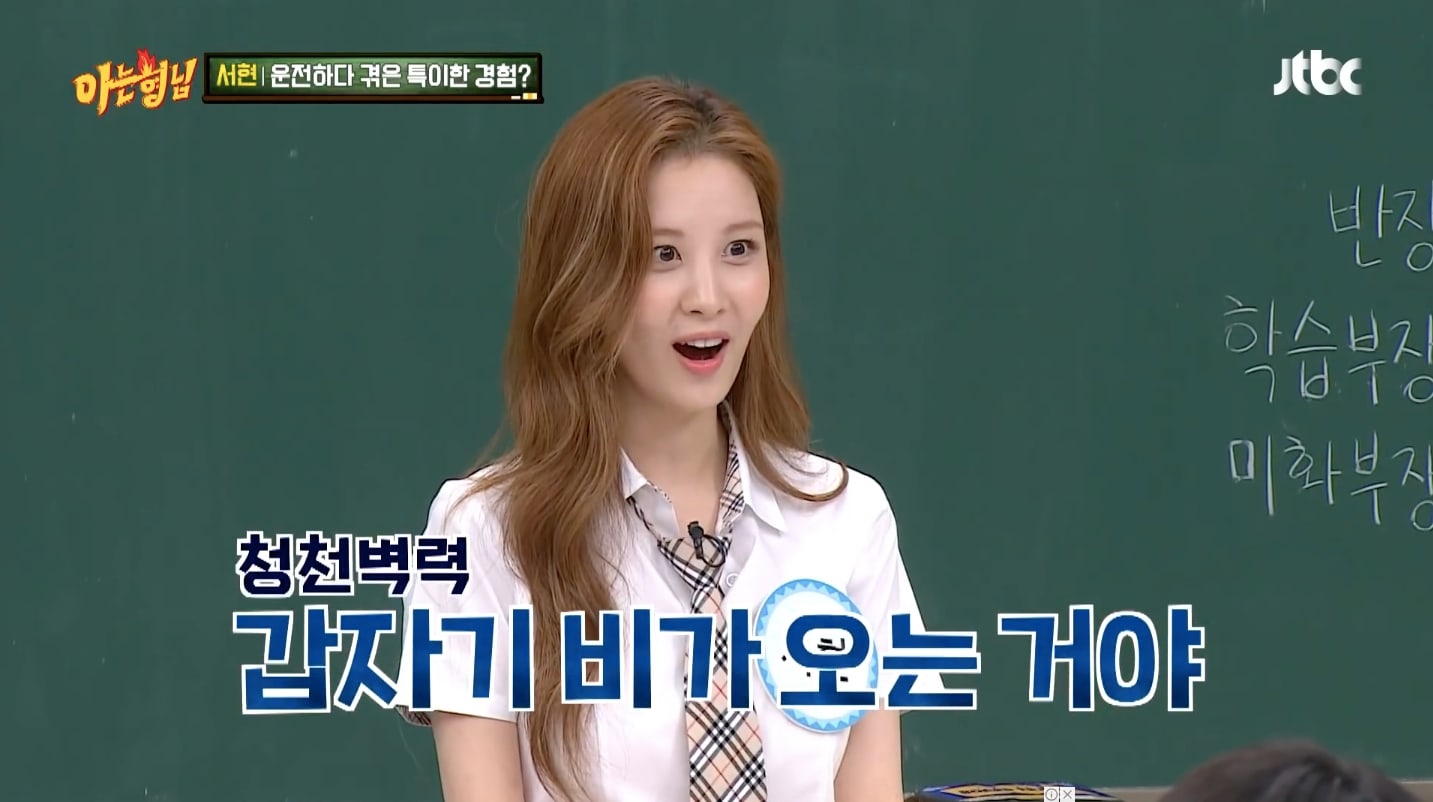 Even Heechul couldn’t believe that his guess, which he’d made as a joke, was right. Seohyun explained, “The weather was really nice that day, so my friend and I decided to open the top [of the convertible]. But then it suddenly started raining out of nowhere.”

“At first, it was just a drizzle, so I thought, ‘Oh, I should close the top,'” she recalled. “But you can only close the top when you’re driving at a low speed, so I couldn’t close it right away. Then, all of a sudden, it started pouring. So my friend held an umbrella [over my head] for me while I drove.”

“Fortunately, we were able to finally close the top after arriving at a rest stop,” she continued, “but we were already completely soaked.” 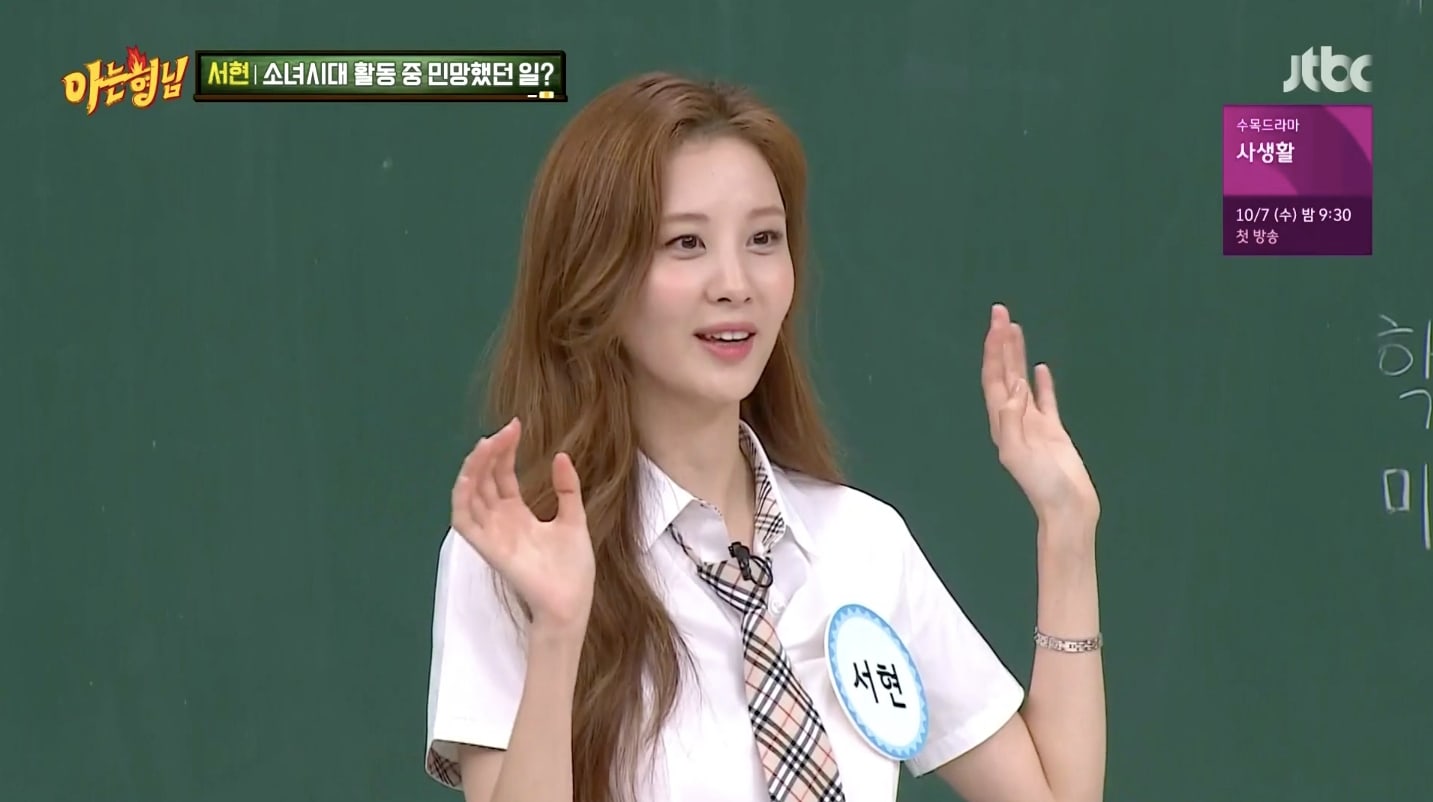 For her next question, Seohyun recalled a particularly embarrassing incident from her promotions with Girls’ Generation.

“You know how there are always a lot of fans [waiting for idols] at the airport,” she explained. “At the time, we had just finished performing at a concert, and we were all dolled up to look cool at the airport. Back then, since our airport fashion [what we wore to the airport] always received a lot of attention, we were wearing sunglasses, long black coats, and boots so that we’d look cool while greeting fans on our way into the airport. But I was wearing pajamas inside my coat.”

Seohyun continued, “I was wearing pajamas, and I was so tired that I was planning to fall asleep as soon as I got on the plane. But when we got to the security check, they told me that I had to take off my coat.”

Heechul asked, “Were the pajamas you were wearing obviously pajamas?” Seohyun replied, “Completely. They were light pink pajamas with white polka dots. But the important thing is that all of our fans were watching us at the time. They were all standing behind the security check and taking photos. It was so embarrassing.” 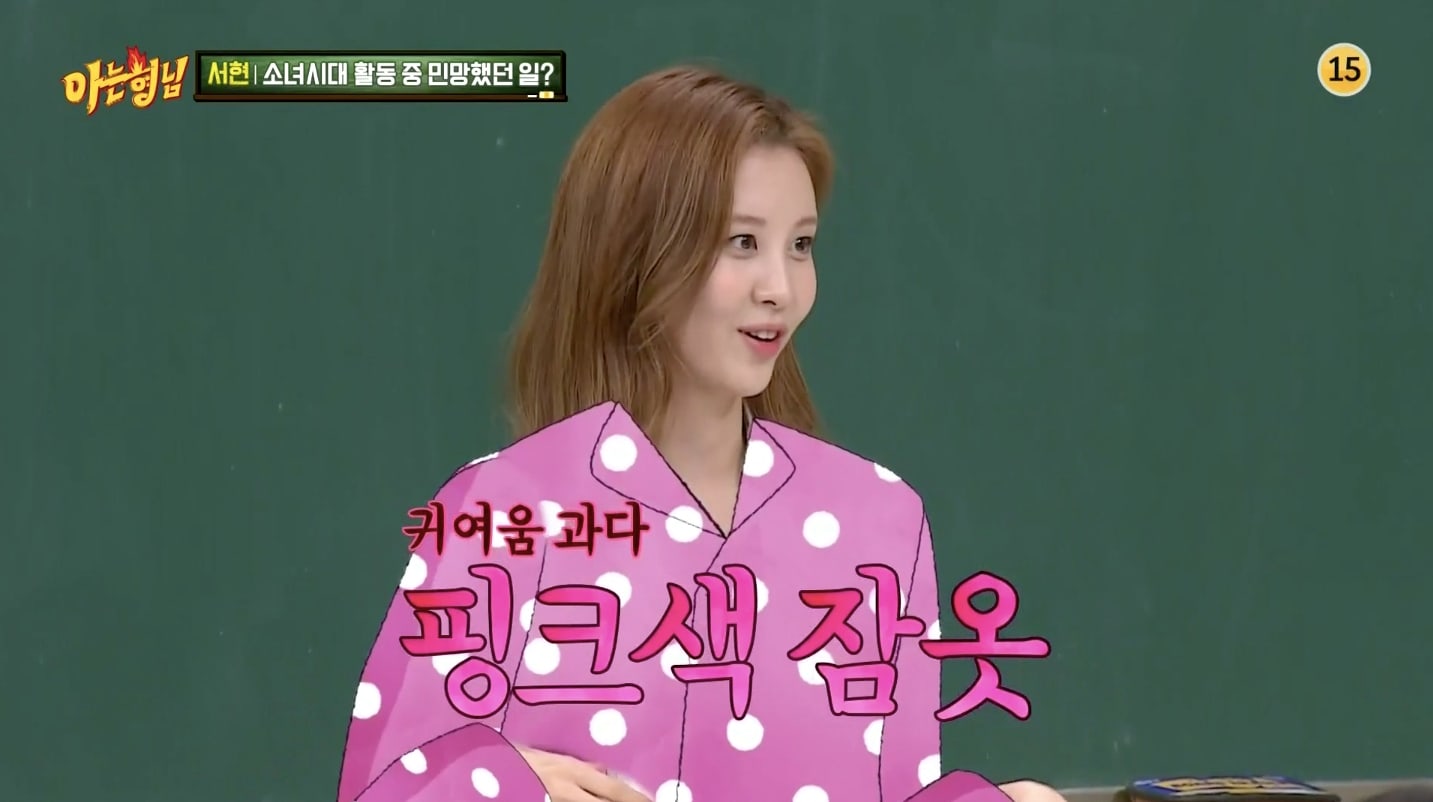 At another point in the show, Seo Jang Hoon asked Seohyun to name the celebrity who had most impressed her with his looks after she saw him in person. Seohyun immediately replied, “Kang Dong Won.”

The cast members teasingly suggested that Seohyun’s speed in answering the question might have hurt Go Kyung Pyo’s feelings, but her co-star amiably agreed that Kang Dong Won was very handsome.

Seohyun explained, “The thing is, I don’t usually find myself attracted to people based on their outer appearance. I usually think someone is handsome or attractive after talking to him or things like that. But Kang Dong Won was the first person whom I found handsome just based on looks.” 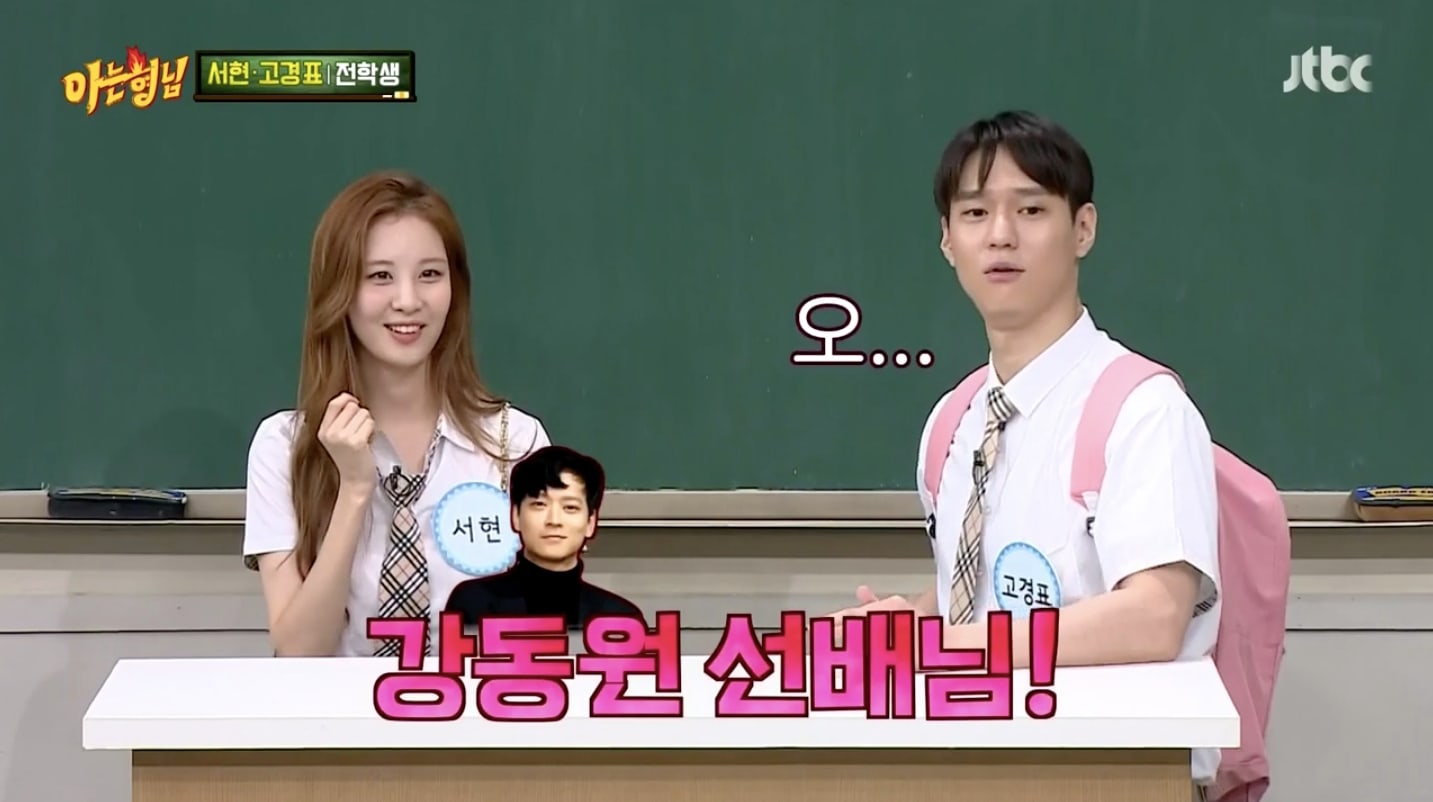 In the meantime, watch “Ask Us Anything” with English subtitles here…