Refund Sisters’ road to their debut continued on the September 19 episode of MBC’s “How Do You Play?”

In the continuation of Refund Sisters’ meeting at Uhm Jung Hwa’s house, Jessi talked about her variety experience and said, “Because of ‘Real Men,’ I went to the army twice.” She recommended that Lee Hyori go on the show “Fake Men,” and Lee Hyori said, “Let’s all go together before our album comes out.” She added, “During Fin.K.L, the members rowed a boat across the Han river. It was at night and one person would scoop water out of the boat while one person rowed.” 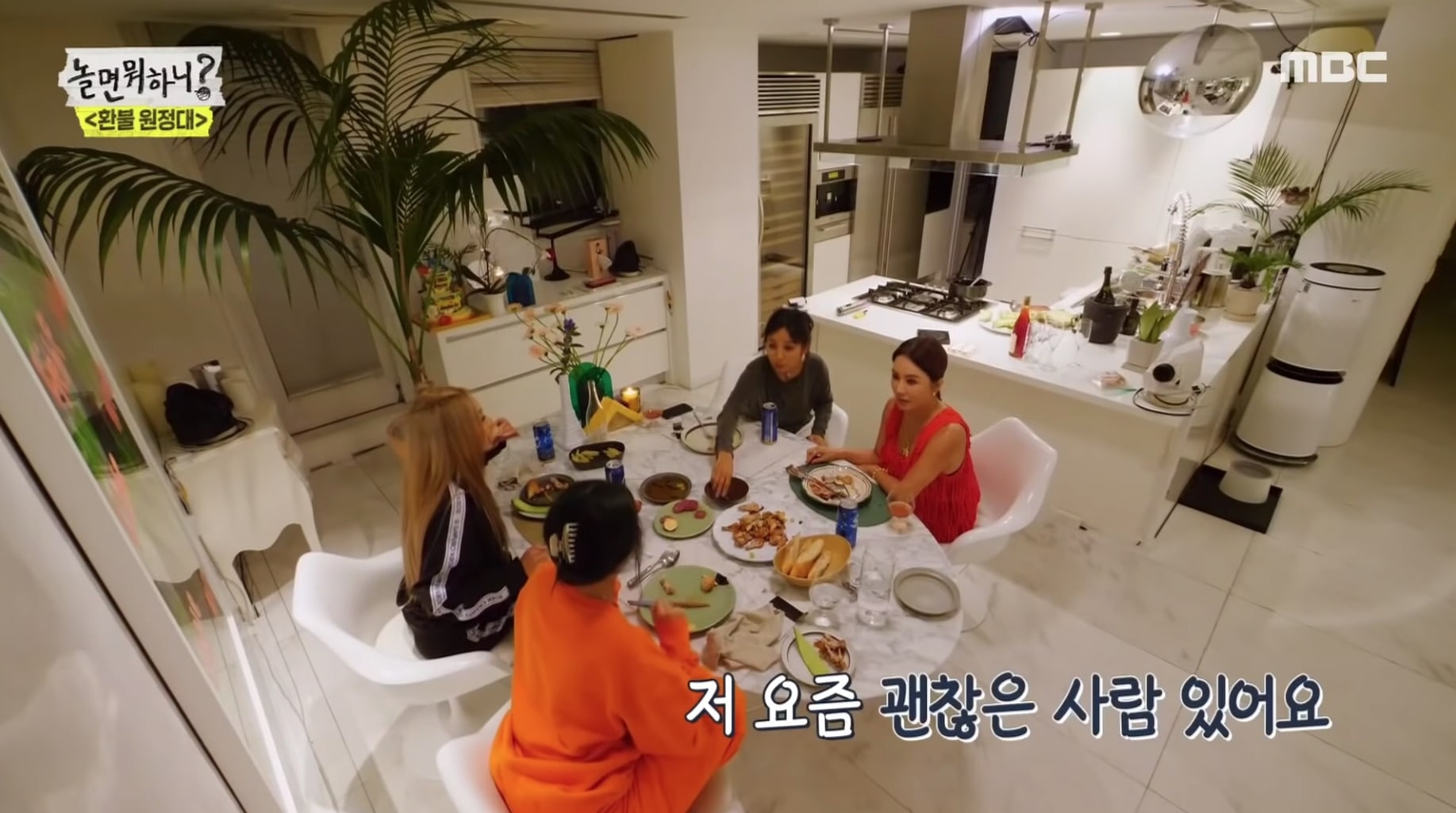 During dessert time, the members shared some girl talk. The members commented on Hwasa’s smooth skin and Uhm Jung Hwa said, “I won’t tell you what will change as you get older.” Lee Hyori said, “Tell them now so that they won’t be shocked.”

Jessi complimented Lee Hyori and said, “I think that of all the natural breasts in South Korea, you had the prettiest.” Lee Hyori quipped, “You haven’t seen them bare, right? In the past, it would be crazy if I took it off. But now if I take it off, I have to hide it. I don’t think anyone is 100 percent satisfied with their body.” But Jessi said, “I’m satisfied right now. I’ll show you all later.” 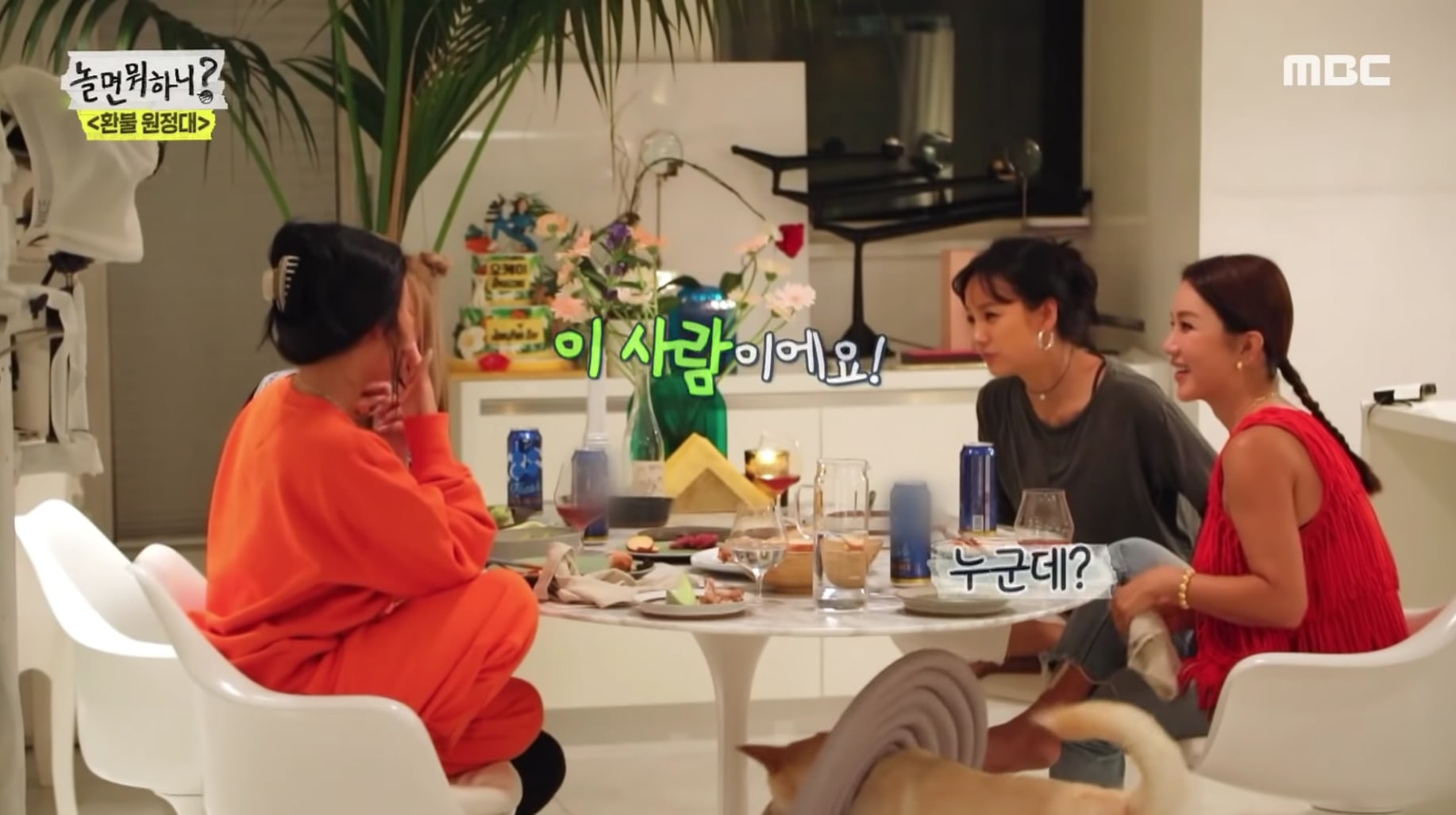 In a conversation about dating and marriage, Hwasa said that her ideal type was someone who was simple and easygoing. After hearing that Hwasa was not currently dating, Uhm Jung Hwa said, “When I was your age, I was always in a relationship. I always dated for at least two years.”

About marriage, Lee Hyori said, “I was scared to get married because I was worried I might have an affair.” Jessi asked, “Is that why you went to Jeju Island?” Lee Hyori laughed but said, “I learned from Lee Sang Soon that you could like someone more as you got to know them better.” 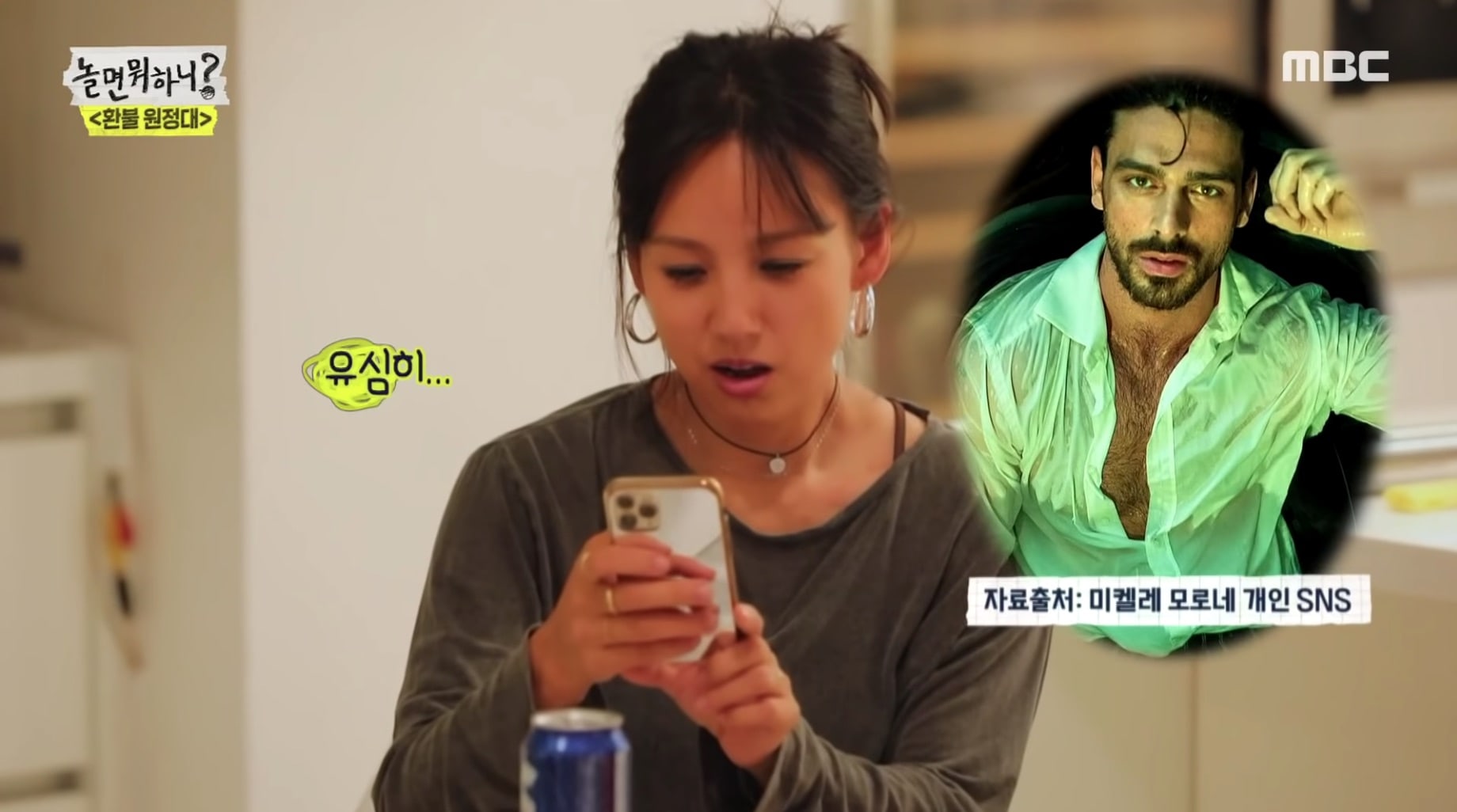 Uhm Jung Hwa said that she had become cautious about marriage and Jessi said, “You need to meet a non-Korean guy who can speak a little Korean. I’ll find one for you. Just wait two years. You have to meet someone in Greece or Italy.”

Hwasa said, “There’s someone who is hot these days. I don’t know him but we could send him a direct message.” She turned out to be talking about the Italian actor Michele Morrone. After seeing his photo, Lee Hyori said, “So hot,” and Hwasa said, “I’m in an imaginary relationship with him these days.”

The members then played the truth game with a buzzer machine. 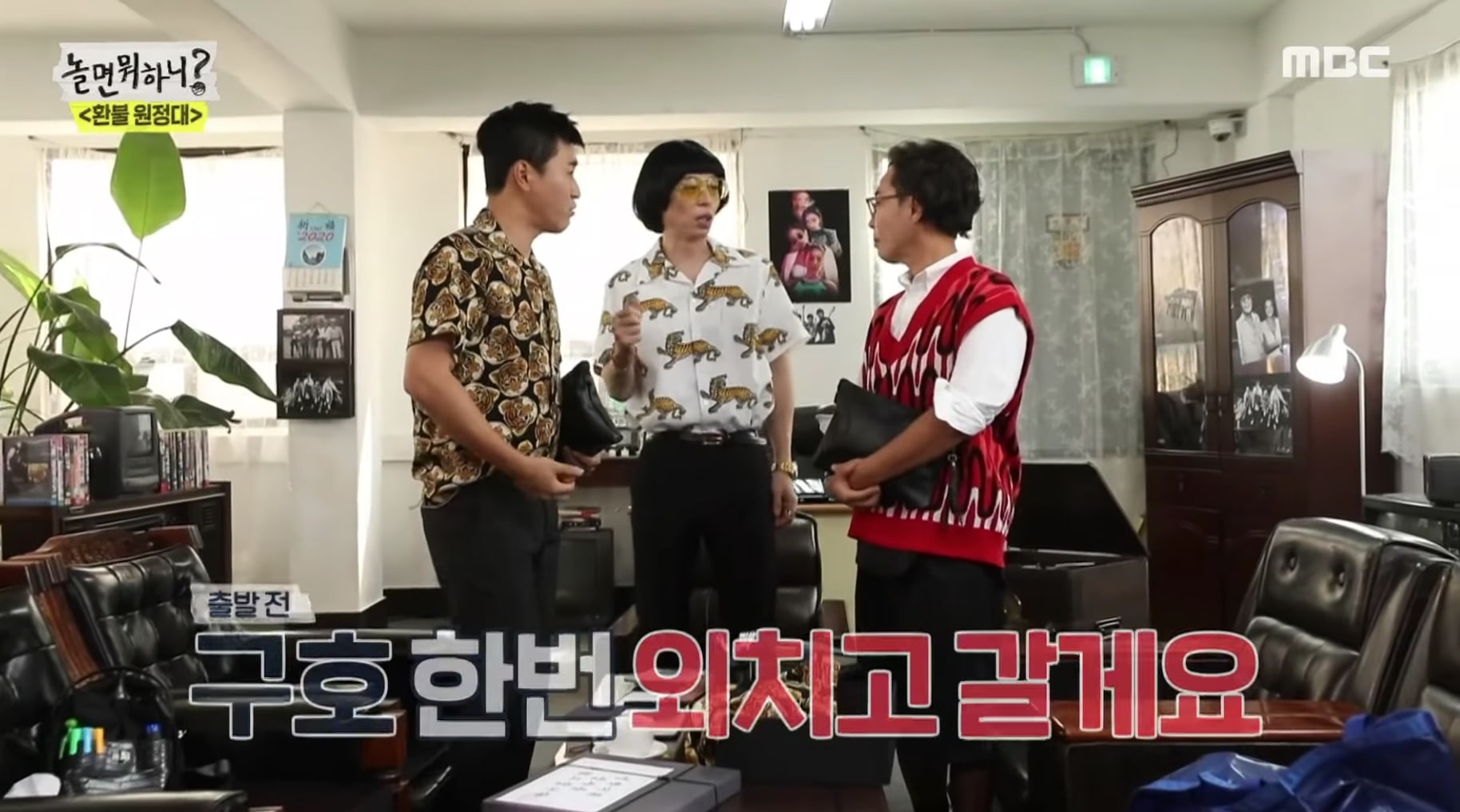 Also in the episode, Jimmy Yoo (Yoo Jae Suk) decided on managers for the new girl group. To help him make a final decision, he consulted a fortune-teller, who told him that Jung Jae Hyung would be the best fit among the members.

“He might fight with them but it won’t become a big fight and he’ll be obedient,” the fortune-teller said, and added, “He and Kim Jong Min have no interest in each other. Jung Jae Hyung ignores Kim Jong Min and vice versa.”

Jimmy Yoo held another meeting with Kim Jong Min and asked him to pick a stage name for his manager job. Because Lee Hyori had asked for So Ji Sub and Song Joong Ki as managers, he told Kim Jong Min to go by “Kim Ji Sub.” Jung Jae Hyung brought his puppy to his meeting with Jimmy Yoo and explained, “It’s too early and I didn’t have time to find a sitter.” Jung Jae Hyung’s stage name was decided upon as “Jung Bong Won.”

In the new managers’ first meeting with Refund Expedition, the members were disappointed after hearing that “Ji Sub” was not So Ji Sub but Kim Ji Sub.

Chun Ok (Lee Hyori) asked Kim Ji Sub (Kim Jong Min), “Why did you say that you would run away if you met me on the street?” Man Ok (Uhm Jung Hwa) said to Jung Bong Won (Jung Jae Hyung), “I will call you by your stage name. It’s time for my revenge. From first to last, that person always puts himself first.” But Chun Ok commented, “When Man Ok was sick, I met up with him, and he cried a lot,” which made both Jung Jae Hyung and Uhm Jung Hwa tear up. 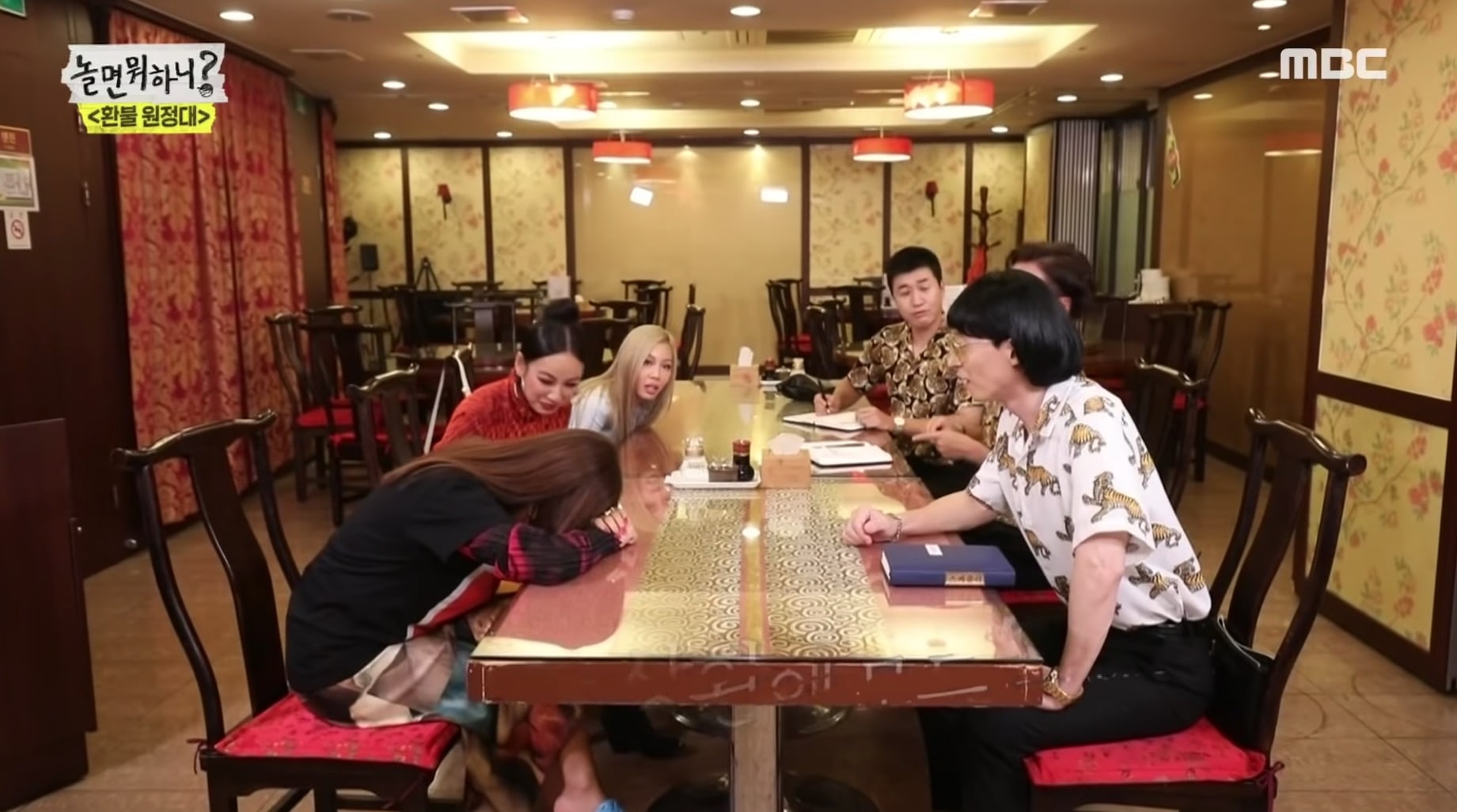