Into The “I-LAND”: A Review Of What Went Down In The Finale

113 days, 23 applicants, viewers from 177 countries, one Revolving Egg Door. Ladies and gentleman, this is the (nearly three-hour) final episode of “I-LAND.” With nine I-Landers left and only seven spots available, who of them will be able to make their debut? Who else is in the audience watching the live show? And which of the panelists continuously gets caught massaging an aching shoulder on camera? (Spoiler: His initials are BSH). Read on to find out!

Warning: You know the drill! Major spoilers ahead!

Welcome to the live show

The nine finalists kick off the live show with an OT9 performance of “I&Credible,” before they’re brought out one by one by host Namgoong Min. No, your eyes aren’t deceiving you. After 113 days, Namgoong Min is finally in the same space as everyone else.

And as per usual, we have the panel consisting of Doobu, Son Sung Deuk, Bang Si Hyuk, Pdogg, and Wonderkid. (Sadly no sighting of Rain though). 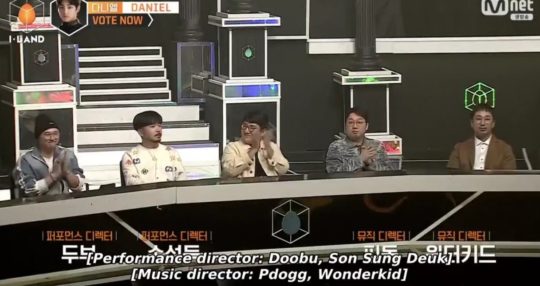 Also, because we’re in the middle of a pandemic, there’s no audience in the studio (which is quite the pity, but safety first). However, we do have TXT and BTS in the audience, the latter whom likely snuck in mid-way because they weren’t there for the opening introductions (hee!). The members of these two groups, who will be seniors to this soon-to-debut group, offer words of wisdom and support throughout the show, and in the case of BTS, also includes some hilarious “malfunctions” courtesy of Suga and V. 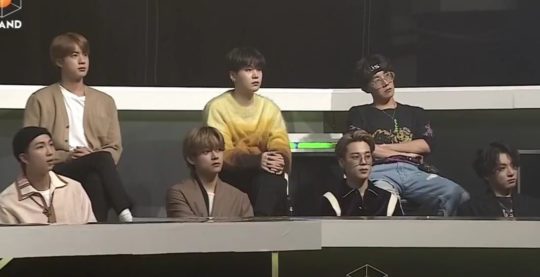 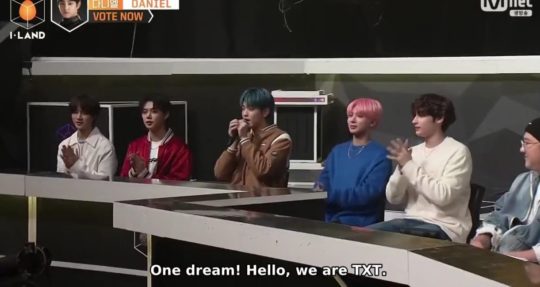 Here are the final nine, ranked according to the results from the third test: 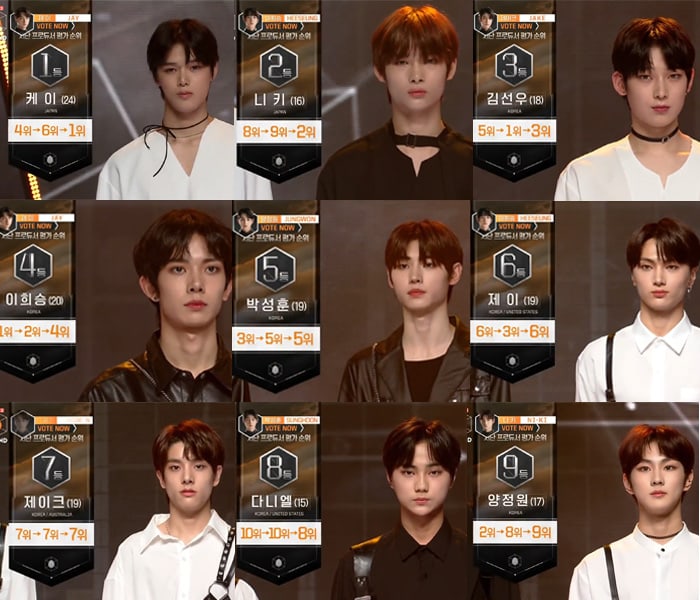 I keep forgetting that Sunoo is older than both Jungwon and Ni-ki!

We also check in with “Global Messenger” Shin Ah Young, who reports on global voting statistics (and adorably switches between accents when talking to fans too). The trainee with the most votes from the United States is Jay, Jake for Indonesia, K for Egypt, Sunghoon for China, and Jungwon for South Korea.

The fourth and final test

We then switch to the pre-taped segments, which picks up right after the results of the third test. Jungwon is feeling rather dejected with his last place ranking, and Jay tells him he would’ve smashed through the Revolving Egg Door if he had been the one sent home, which then garners a retort from level-headed Sunghoon: 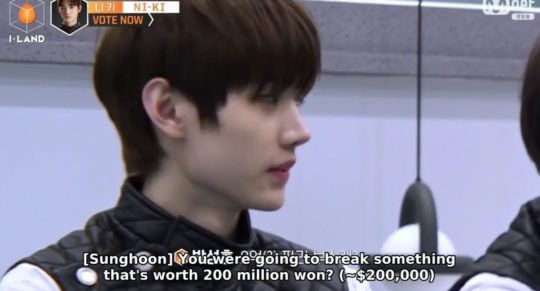 The final nine are then summoned to the lobby, where the final test is announced. They will perform the original song “Calling (Run to You)” together as a group, then the global voters will vote in six members, whereas the panel will decide on the last member. I initially thought that the results from this test would be solely decided by global votes alone, so this is a nice turn of events, giving the panel the final say and saving one last trainee.

After distributing their parts (Sunghoon is still under the “No. 5 curse”), the trainees also decide to arrange their roles. Heeseung volunteers to be the father, Daniel the mother, Jungwon the son, Jake the family dog, Sunghoon the family cat… wait, what’s happening?

Getting back on track, Heeseung nominates K as the leader, which everyone instantly agrees to. Heeseung is nominated to be the vocal leader, Ni-ki the dance leader, and then things go off the rails again. Jay is appointed the “daily life” leader, Sunoo the “expressions” leader, and Jake and Sunghoon — coincidentally the two who aren’t usually brimming with energy — are given the titles of “tension” (energy) leaders (to keep everyone in high spirits). There’s a lot of silliness going around, but you can really tell that the boys are gelling well together. They feel comfortable enough to tease and be savagely frank with each other, and it makes you excited to see them function as a group going forward. 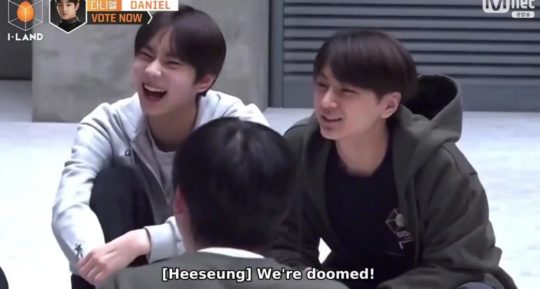 After a mid-point evaluation where the boys gift Doobu and Son Sung Deuk rolling papers (basically a large paper where everyone writes their thoughts and gratitude to the recipient), the nine finalists are given another task: to film individual PR videos. This task quickly turns into torture, where they torture themselves (trying to be adorable even though it makes them cringe) and each other (the whole video is self-produced, so any and all effects are done by the boys themselves). Oh, and at some point, you’ll also see a sheep carrying a large whiteboard through I-LAND. Heh!

Going back to the live show, we see the nine finalists perform their last and final test, “Calling (Run to You).”

The panel then take turns praising each trainee, complimenting them on their growth and hard work.

The day before the live show, the nine I-Landers are summoned to the dining area where packed meals are waiting for them. They’re homemade meals prepared by their families complete with a letter from their loved ones! (The boys whose families are overseas are given takeouts requested by their loved ones). Heeseung kicks off the letter-reading, where his hilarious brother again makes his affection for Jay very clear. Then when it’s Sunghoon’s turn, he starts full-on bawling mid-meal, which gets everyone teary-eyed as well. It quickly becomes a challenge to see who can calmly get through their letters without tearing up, but from what we see, everyone pretty much fails at this. As Sunghoon so eloquently puts it, “I haven’t even seen Daniel’s parents before! Why am I so emotional?” Tell me about it!

We’ve heard the boys mention letters or visits from loved ones every time there’s a benefit or they’re randomly summoned to gather, so it’s nice that they finally get their wish. It’s the day right before their live show, the day where seven of them will start a new journey, so there’s probably a lot going through their minds right then. The support from their loved ones and the reminder of who they’re working so hard for, is surely a great comfort and boost for them.

Continuing on with all the emotions, we also see a visit from the 13 previously eliminated trainees. The I-Landers are surprised to see them at first, but then soon enough everyone is hugging each other in excitement. The reason for their return? To prepare a 22-person “Into the I-LAND” performance. This is the first song they all performed, so it brings it all full circle. They practice together and also dance to some of the songs from their previous tests, which is a nice trip down memory lane.

Oh, and Jay adds another entry into his Big Box of Embarrassing Moments.

All 22 boys also sit down to play some simple games, and they’re all having a lot of fun even though they’re squeezed onto a 12-person couch. We also see more from Jimin here than we do in the whole time he was on the show.

The birth of a new boy group: ENHYPEN

Oh, and while the boys were still at I-LAND, the system revealed their group name to them (us viewers only find out later in the show) which turns out to be “ENHYPEN,” carrying the meaning of growth, discovery, and connection (The boys were guessing names such as “bluetooth” and “wifi”). There’s a tiny part in me screaming about how it’s spelt but I guess we can’t be too pedantic about Korean boy/girl group names.

And now on to the very, very, very important segment of the show, the part everyone’s been working towards for the past 12 weeks — the announcements of the final seven! (The following will be in the order as seen live on air).

In fifth place, the official “part 1” owner (with over 1.1 million votes)… Heeseung!

In fourth place, the boy who has been on fire these last few weeks… Ni-ki!

In third place, the one who continuously impresses the panel despite his short training period… Jake!

In second place, the boy who will undoubtedly entertain with more entries into his Big Box of Embarrassing Moments… Jay!

In first place, with 1.4 million votes (a very significant increase from second place which doesn’t break 1.2 million) is… JUNGWON! Yes this sheep-boy deserves all caps because he literally just came back from the brink of elimination and clawed his way all to the top. Or, at least his fans did that for him. To be honest, with such a big gap in votes, I thought it would be Sunoo, but wow… a revolt of epic proportions by Jungwon and his fans!

Which then leaves us with the trio of K, Sunoo, and Daniel. Daniel hasn’t been placing high for the most part, so him being here is sadly expected. But how did K and Sunoo end up here? Especially Sunoo who has always placed first for global votes. This is shocking, and the only reason I can think of is that Sunoo’s fans believed him to be very safe and thus diverted their votes to the other boys who were in danger. And as a person who watches a lot of reality competition shows, I can tell you that this isn’t in your fave’s best interest because that’s how shocking eliminations happen! 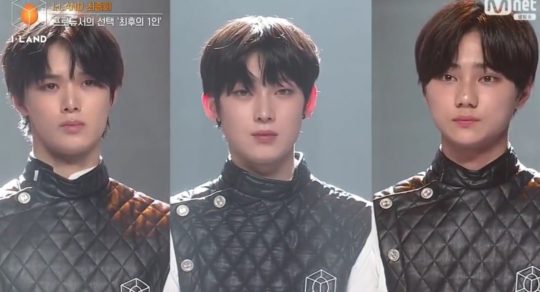 And that’s not the end of the shockers either. With K, Sunoo, and Daniel left, the panel decides on who to save to fill in the seventh spot. Here’s some statistics: During the duration of the show (and from the results that are revealed to us), the panel has always scored K higher than Sunoo, with K even placing first during two tests (part 1 test 2 and part 2 test 3). Logic would dictate that the panel would choose K over Sunoo, but nope… they choose Sunoo!

Before you grab your pitchforks, I want to be clear I’m not commenting on which of these candidates are more deserving of the final slot or who is more talented. Rather, based on what we’ve seen so far, it feels like K would be the easy answer, but the panel have their own big picture to think about, which leads them to the choice of Sunoo.

K looks like he’s gotten the wind completely knocked out of his sails. The poor boy.

And there you have it everyone, the birth of ENHYPEN! The egg has cracked, the chicks are out in the world, and they’re ready to take flight! To ENHYPEN, K, Daniel, and all the other eliminated trainees, hwaiting!

Just keep these little chicks away from loud noises and explosions, eh?

Watch “I-LAND” on Viki below:

Which is the most shocking moment for you? How are you feeling about ENHYPEN, both the name itself and the debuting members? Let us know in the comments below!

Belinda_C is happy Jungwon made it! He’s practically a maknae-on-top in the making with all his savage straightforwardness hehe. Talk SEVENTEEN and Shinhwa with her on Twitter!