PENTAGON has revealed an interview film in which the members discussed their thoughts on Jinho’s military enlistment, Yan An’s hiatus from group promotions, and more.

Titled “RE: PENTAGON,” the video begins with a voice-over that says, “It looks like one of our members disappeared again.”

The group’s first interview question asks about Jinho, who enlisted in the military earlier this year. The members talked about feeling proud and sorry for Jinho when he left for the military. Wooseok mentioned being surprised that Jinho had cried. “He’s not someone who cries much,” Wooseok said. “I guess it really hit him.” 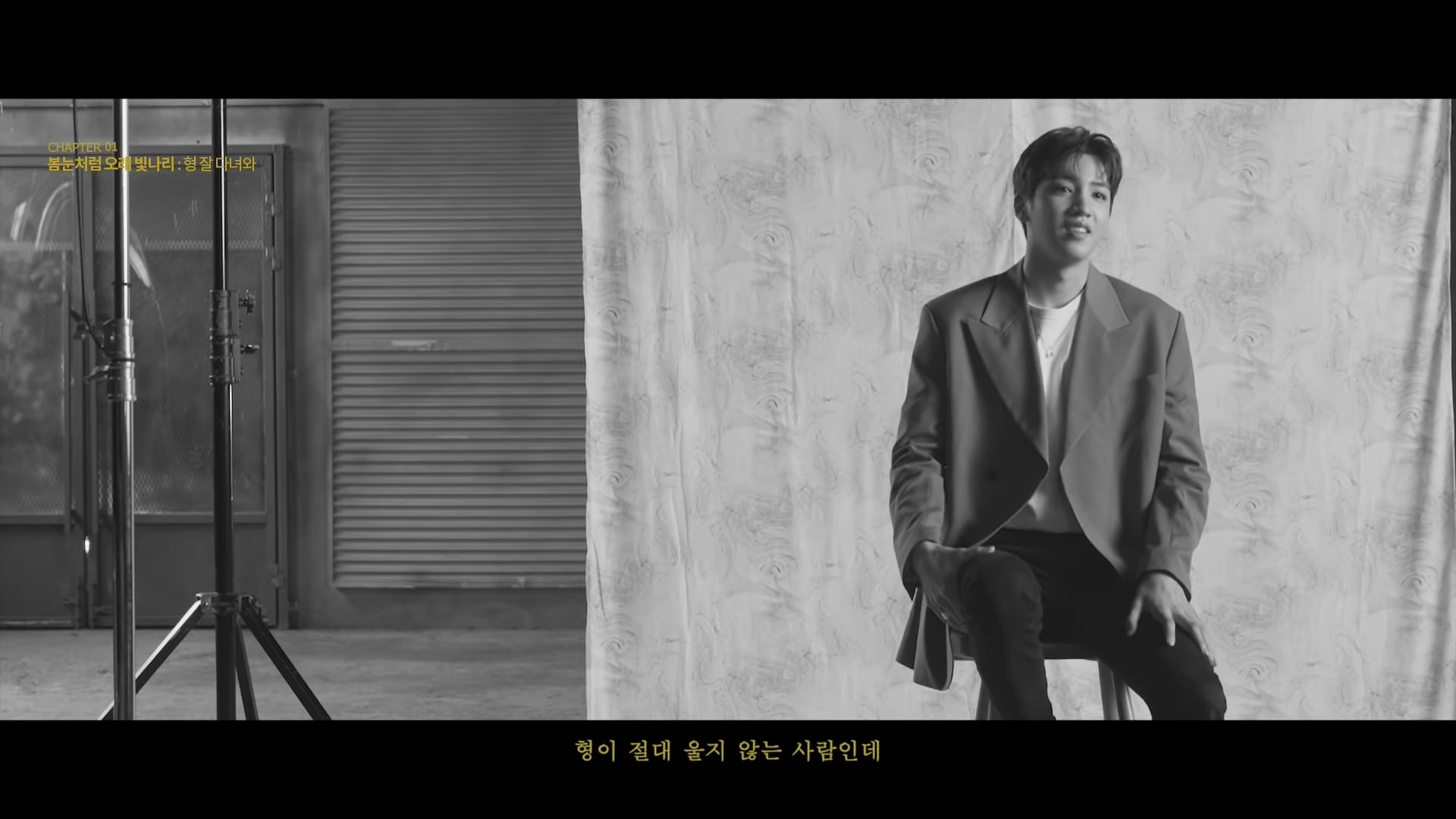 Yan An shared, “He called me in the car before he enlisted. He told me that he’s leaving for the military and that he loves me.”

Kino talked about the added pressure of promoting without Jinho. He said, “We’re a group that hasn’t exactly found our place yet. I think the responsibility of having to protect our spot until he comes back is what weighed me down the most.” Kino added that he had written to Jinho in a letter that he’d like Jinho to see the group holding a first-place trophy on TV. 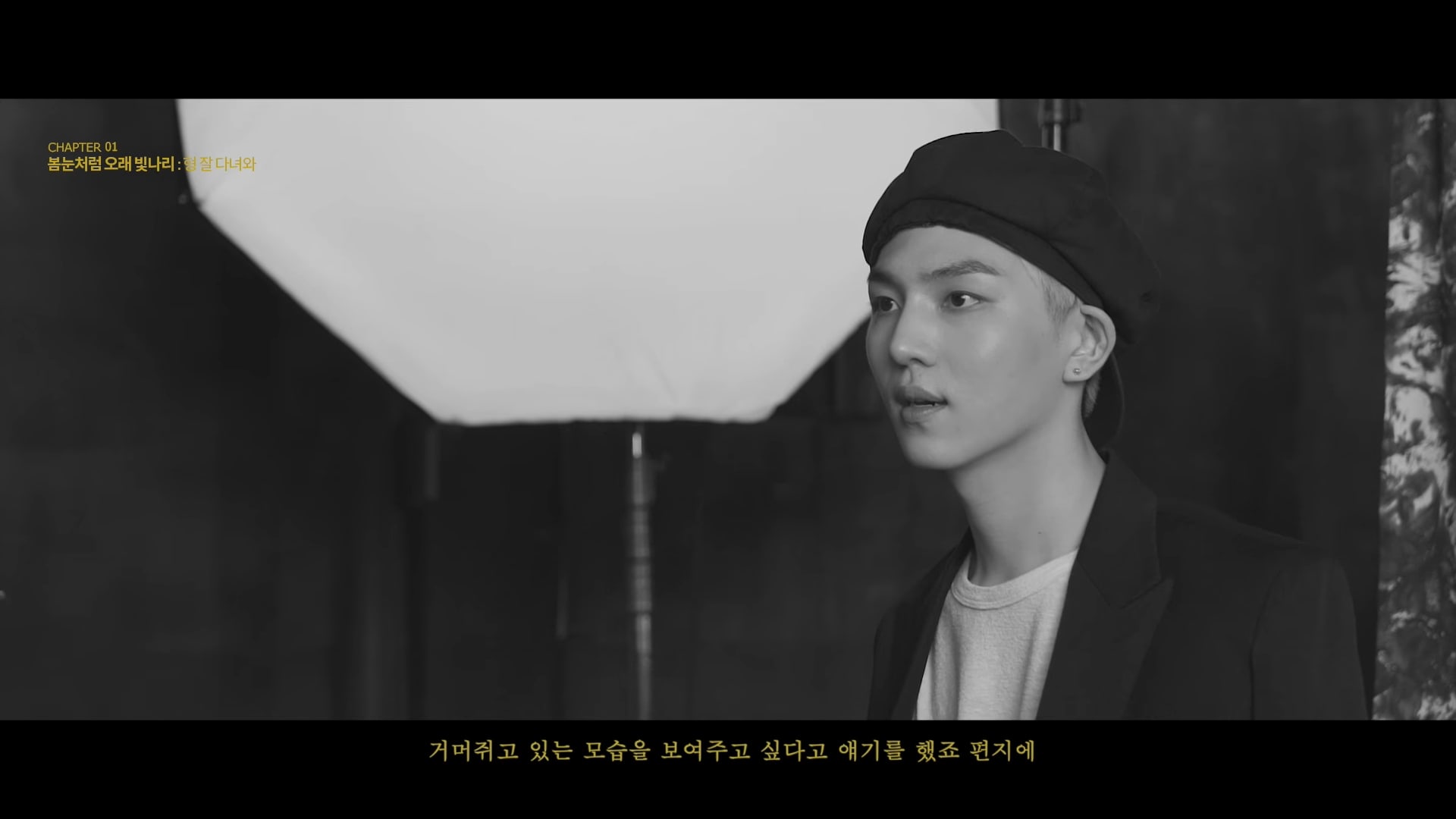 The members also talked about Yan An’s hiatus from the group’s promotions.

Kino said that he was worried about the fans and their reactions to the news. Wooseok said, “Yan An was so sick for a period of time that I had second thoughts about even just trying to talk to him. He was so on edge that I couldn’t approach him easily.”

He continued, “I found the courage to talk to him once. I was in my room, and then I asked him, ‘I’m going to eat. Do you want to come with me to the convenience store?’ He told me that he would, and I felt great at the time.” Wooseok went on to explain that he was then able to ask Yan An whether it was true that he wouldn’t be promoting with the group for the time being.

“I really didn’t want to let him go to China,” Wooseok admitted. “He told me that he might be gone for a long time, and suddenly I teared up. He patted my head and tried to comfort me, saying that he was sorry. I think he cried then too.”

Yeo One talked about feeling the most regretful about releasing an album without Yan An. Shinwon shared that Yan An seems to have returned healthier, like an “upgraded” version of himself. 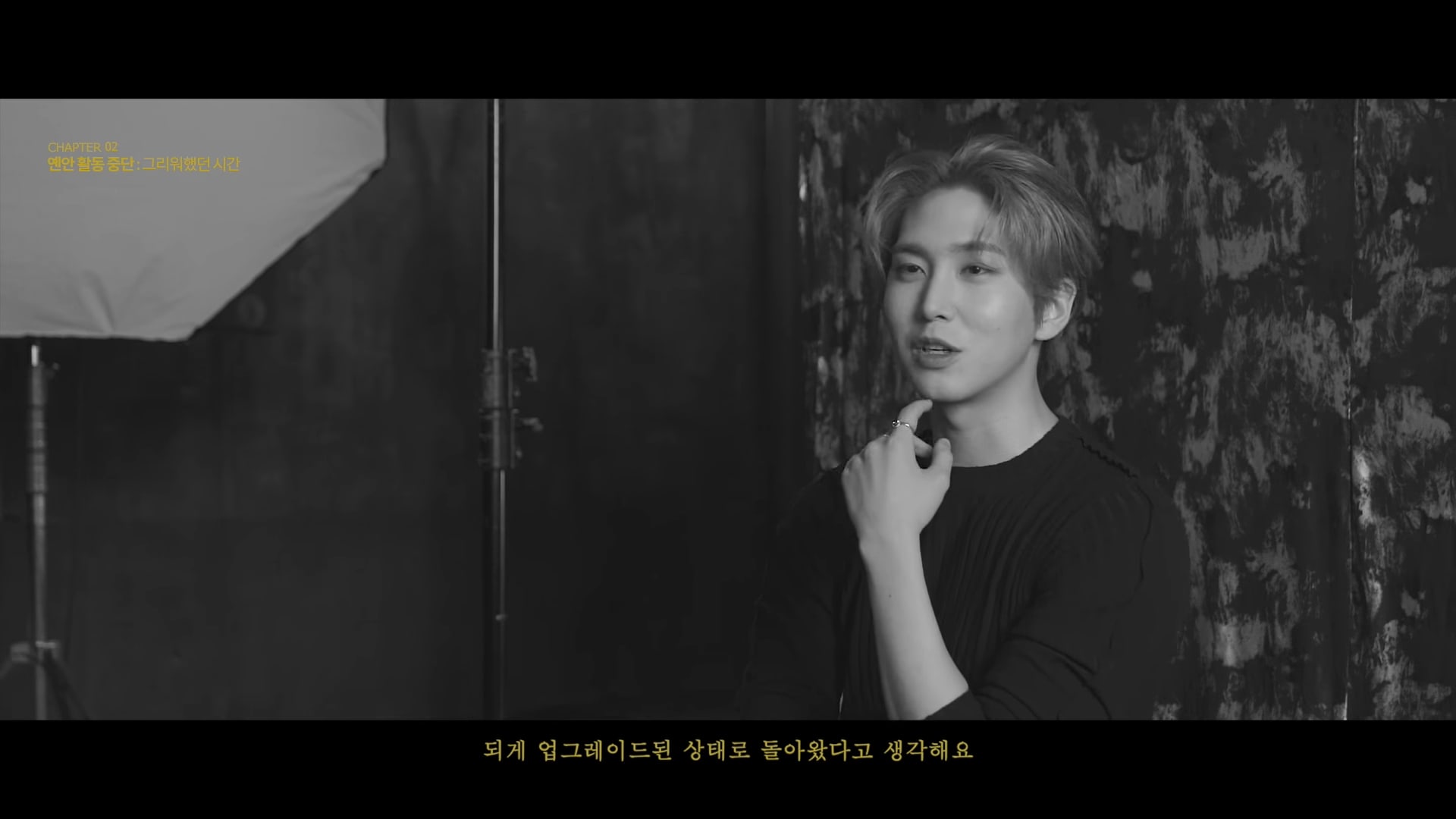 Hui said, “As a family that works together, we settled on the idea that Yan An would just be resting for a bit. But as we began our promotions, I realized it was nicer when we were all together, regardless of the results and our music.” He added that he was very happy to have Yan An back for their October comeback.

Yuto shared that he felt even more worried for Yan An, as they are both foreign members. “I was really sorry because I couldn’t do anything for Yan An,” he said.

The next topic was the group’s PRISM World Tour. Hongseok commented, “I actually only have good memories about our world tour to the point where all the hard moments seem nice to me now.”

“I thought to myself, ‘I made a good decision to come to Korea,'” Yuto said. “The world tour was a time that made me think, ‘I’m a happy person.'” Kino added that he remembered thinking, “This is why I became a singer. I’m doing this because of the world tour.”

The members then talked about feeling especially emotional during their first “UNIBIRTHDAY” event in 2018 dedicated to their fan club, UNIVERSE. Kino and Hui talked being touched when they saw the light sticks in the audience. “I was able to find strength thanks to those times,” Shinwon said. “To PENTAGON, that event was a very big moment.”

The group also shared their thoughts on the success of “Shine.” Hui began, “I felt like if we started caring about our success, music, album, stories, and content that I have to create, those things would get too heavy and strong for us. That’s why we tried really hard to not feel any pressure over our results and to enjoy it, but the members then told me, ‘We’re rising on the charts.'”

He continued, “I couldn’t believe it. I was crying so much. I really didn’t have any regrets.” 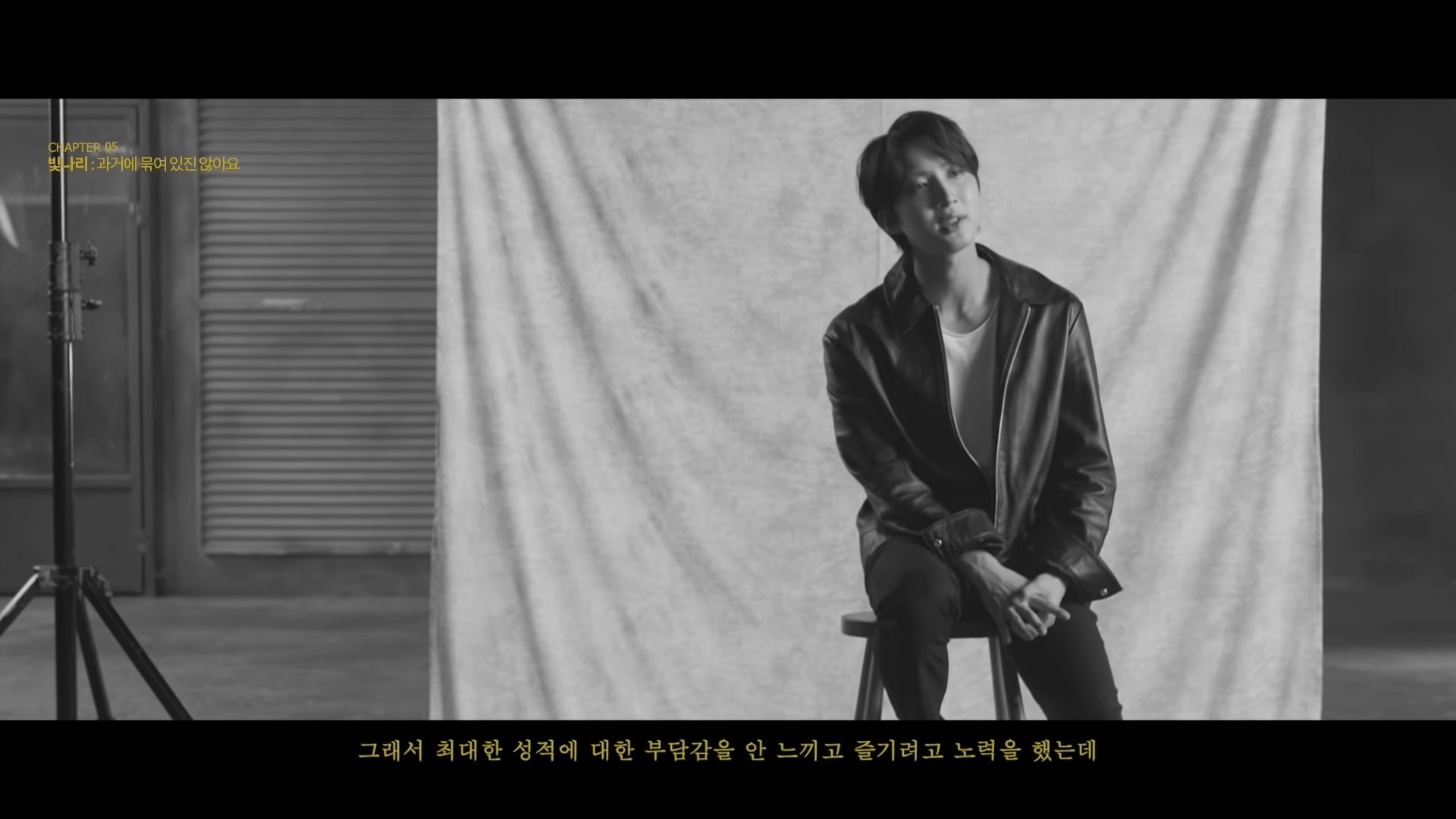 Kino shared his ambition for the future. “We’re going to do even better, and we must do even better than we did, so I’m not tied to the past,” he said.

PENTAGON then talked about their debut showcase, describing how it was unforgettable for them and how they had cheered each other on before going onstage. The group went on to share their thoughts on “Pentagon Maker,” the Mnet survival program through which the group was introduced. Shinwon commented, “That show was the worst.”

Yan An mentioned that the times during the show were their darkest moments. “We were still trainees,” he said, “It wasn’t that long since I came to Korea. Maybe a year? I couldn’t really speak Korean well, and I couldn’t communicate with everyone. But the members helped me out a lot, so the atmosphere was nice.” He added that if he could go back to the show with the mindset he has now, he’d be able to do even better.

Yeo One shared that all the members tend to help and support each other. “I think it’s just our personalities,” he said.

Kino then concluded, “I don’t want to imagine PENTAGON without one of our nine members.” 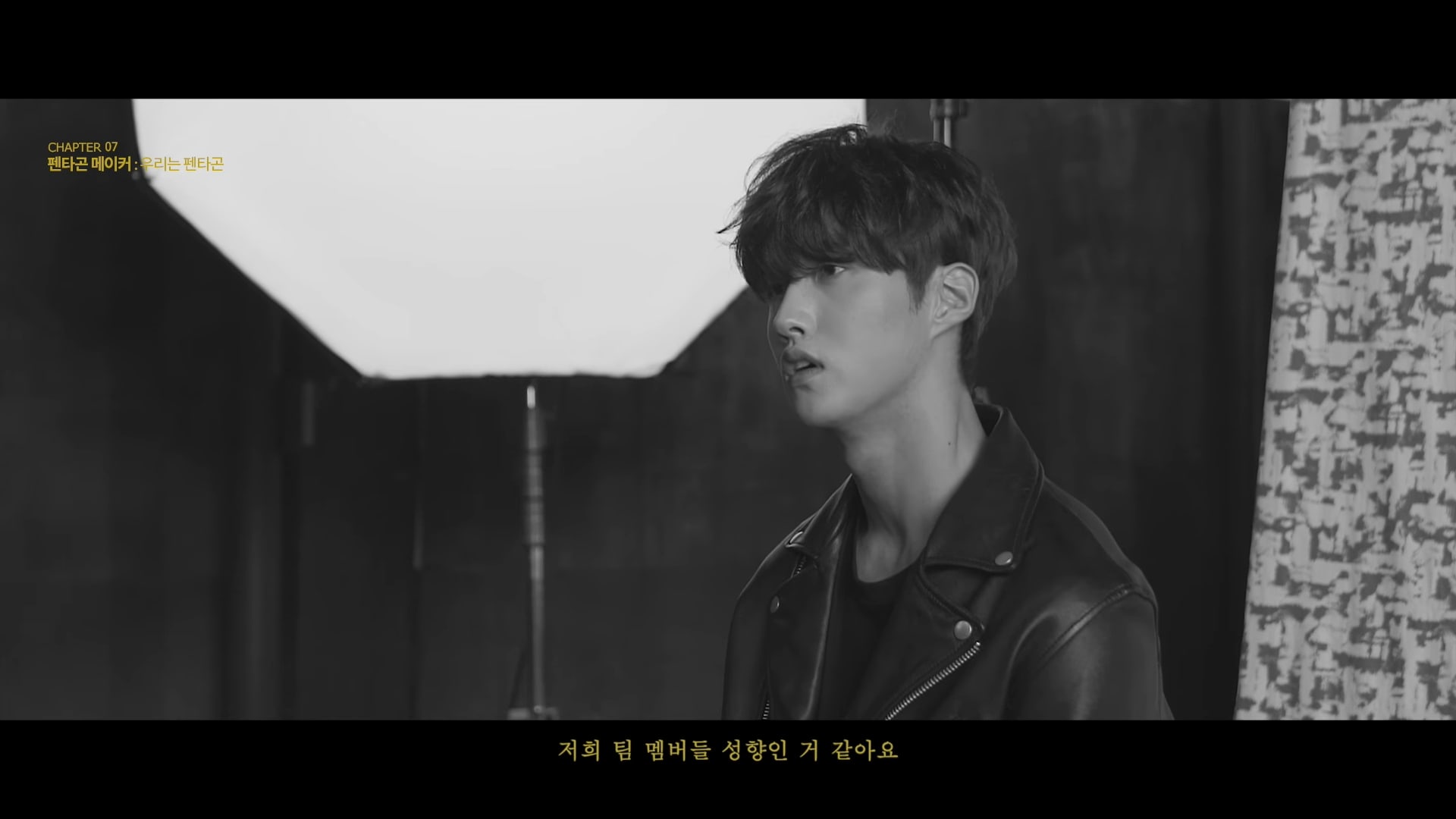 PENTAGON is preparing for an October comeback, their first release in eight months since their studio album “Universe: The Black Hall” and its title track “Dr. BeBe.” It will also be their first comeback after their appearance on Mnet’s “Road to Kingdom” and Jinho’s military enlistment.