Park Ha Sun Talks About Dealing With A Stalker

Actress Park Ha Sun appeared as the first guest on the SBS Plus show “You Can Tell Your Sister” (literal title).

The program’s hosts are Lee Young Ja, Kim Won Hee, Lee Ji Hye, and Hwang Je Sung. During the October 8 episode, they brought up the topic of celebrity stalking.

“I’m experiencing it, to be honest,” Park Ha Sun said. “They even know my daughter’s name.”

She shared that a man had come to her autograph event and asked her to sign her autograph with the words, “I love you.” She said that while she wouldn’t usually write that while signing, he insisted and so she finally did.

“He said that meant it was our first day as a couple,” she said, shocking the hosts.

“There was an event before my wedding, and he even came there,” she continued. “He gave me diary entries that he’d written and looked at me with resentment in his eyes. He talked about ‘what we’ve been through together.’ Something that’s really terrible is that he thinks we have a child together. The child even has a name.”

The hosts said that her husband Ryu Soo Young must be furious about this. Park Ha Sun said that while she’s been concerned about it and scared, he’s suggested that she not react as it could cause the stalker’s behavior to get worse.

Park Ha Sun went on to say that she reported the stalker after he posted about her on a personal site, including making sexual comments. However, he’s very knowledgable about how to get around the law, as he refers to her as simply “Ha Sun” or “Our Ha Sun” and never uses her full name.

“Therefore there’s nothing we can do according to current law,” she said. 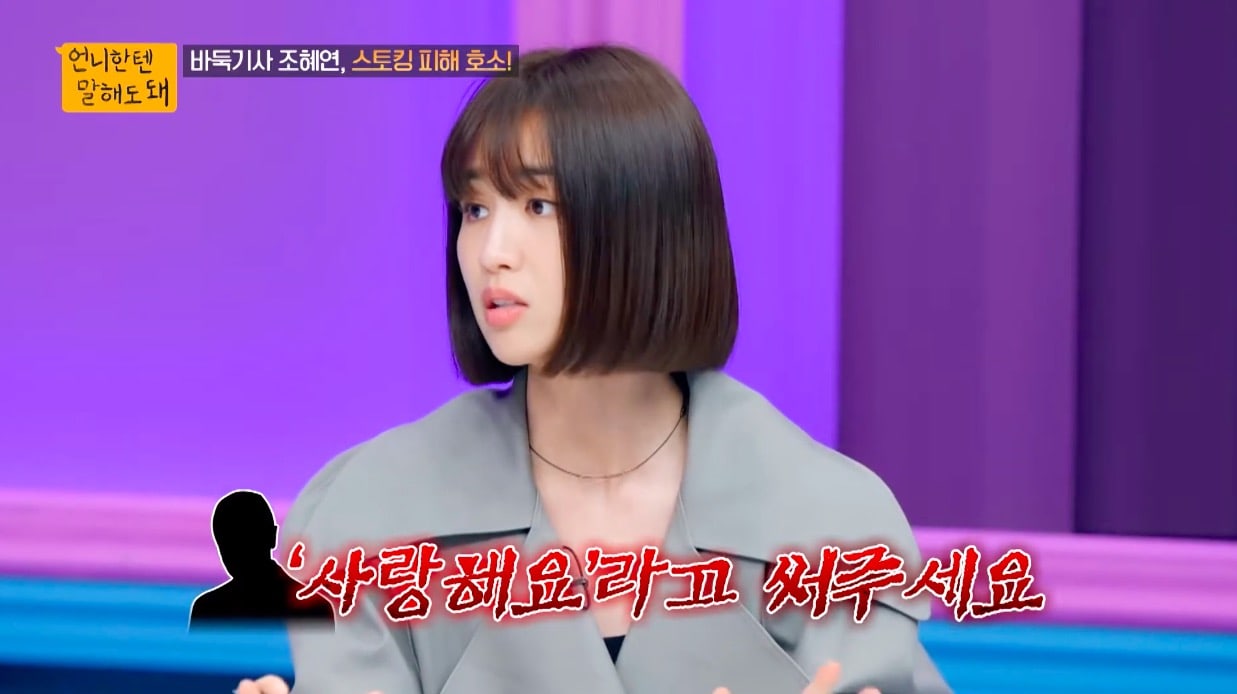 During the show, Park Ha Sun also talked about how after having her first child, she tends to cry if she reads articles about topics such as child abuse. However, she hasn’t been like that about her own personal matters.

“Many really difficult things happened to me last year,” she said. “My dog, who had been with me for 14 years, passed away. I heard on the day before filming so I couldn’t cry about it. But I wondered if it was okay for me to not feel sad like that, because it seemed like it would pass if I could let it out through tears but I wasn’t doing that. My younger brother also suddenly passed away last year.”

Host Lee Young Ja shared that when her close friend Choi Jin Shil had passed away, she also didn’t cry for a long time, as it hadn’t felt real. Three or four years later, she suddenly burst into tears when she was walking along the street.

Psychiatrist Jeon Mi Kyung said, “Park Ha Sun seems to have repressed her emotions. When that happens, your emotions are expressed in other ways.” She advised her, “No matter what you’re feeling, it’s important to recognize that your feelings are right and to accept them as they are.”

After filming the drama “Two Weeks” together in 2013, Park Ha Sun and Ryu Soo Young got married in January 2017 and their daughter was born in August of that year. Park Ha Sun will soon star in the drama “Birthcare Center.”

Park Ha Sun
How does this article make you feel?