On October 10, they debuted with their track “Don’t Touch Me,” which was produced by Rado, a member of the hitmaker duo Black Eyed Pilseung. Soon after, the song took No. 1 on major realtime charts.

It continued to soar in the rankings, and it grabbed No. 1 by October 12 at 1:30 p.m. KST on the daily and 24Hits chart of Melon; daily and realtime charts of Genie and Bugs; Vibe’s daily chart; the realtime charts of Flo and iChart, and the weekly iChart. Sweeping all these charts means it scored a “perfect all-kill”! 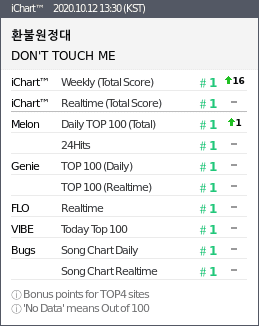 All proceeds from the song will be donated to charity.

Refund Sisters
How does this article make you feel?