Park Bo Gum shared a welcome update on his current status as he hosted an official event for the Republic of Korea Navy.

Park Bo Gum enlisted in the navy on August 31 and is currently serving as a cultural promotion soldier. Earlier this week, the Republic of Korea Navy announced that Park Bo Gum would be hosting their concert at the Seogwipo Art Center on Jeju Island to celebrate the Navy’s 19th onboard debate.

The concert was broadcast live on the Republic of Korea Navy’s YouTube channel and Facebook page on October 27. After the honor guard gave the opening performance, Park Bo Gum appeared and introduced himself as, “A cultural promotion soldier and private, Park Bo Gum.” 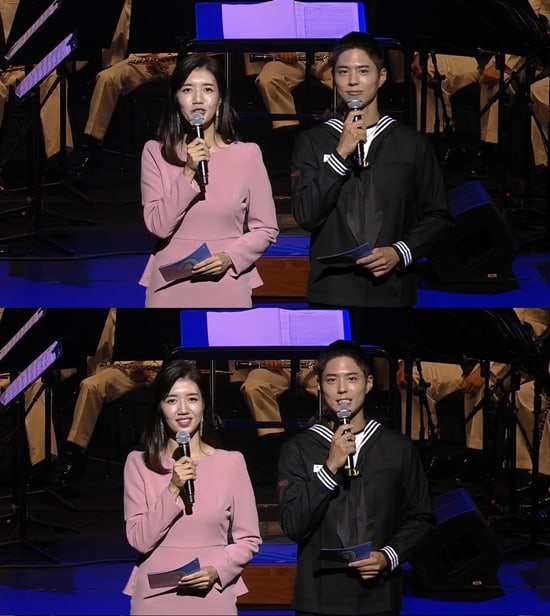 After he was asked about how he was doing, he responded, “I completed my training and am now participating in my first official event on Jeju Island. Tonight is also the night of the ‘Record of Youth’ finale. I hope that people will tune in to the drama after enjoying tonight’s concert.” He also promoted his upcoming sci-fi film with Gong Yoo.

Park Bo Gum continued, “The Republic of Korea Navy Band and the naval promotion department worked hard to prepare for this concert. Today’s concert is being broadcast live via the navy’s YouTube channel, so please stay with us until the end.”

He and his announcer co-host then introduced each performance and shared their admiration after each performance ended. The soldiers in the concert displayed talents such as b-boying, samulnori (traditional Korean percussion), and more. Before the final performance, Park Bo Gum said, “The strength of the navy is the future of South Korea.” He and the other soldiers in the navy then sang the navy’s military song together.

The full concert is available below:

Before his enlistment, Park Bo Gum completed filming on tvN’s “Record of Youth,” which aired its final episode on October 27.