We start off this week’s episodes right where we left off, with our three leads — Lee Yeon (Lee Dong Wook), Lee Rang (Kim Bum), and Nam Ji Ah (Jo Bo Ah) — stuck in their respective nightmare-scapes. It prompts them all to do a little soul-searching and maturing, but thankfully they all make it out with new found determination and no worse for wear (for the most part). But that’s not the only thing we’re glad to see happen this week. There’s significant development for several of our characters, with more explosive events teased for down the road.

In the meantime, here are some of the things we’re glad to see in this week’s episodes:

Ji Ah consistently being such a worthy heroine

Ji Ah (and Ah Eum) has such wonderful qualities — tenacious, smart, spunky, brave, trusting — and it’s great to see the writers consistently allowing these qualities of hers to shine. Her mental strength is in full display when she’s trapped in the Spirit of Darkness’ (a.k.a the Nightmare Lady) nightmare-scape, because even when she’s showered with all the love and affection she’s been craving for all this time, she still manages to step away from it all and choose to return to reality. Sure, it takes a little reminding from Yeon (via a magical link), but seeing her so happy with her parents, it’s understandable why this “home” is so alluring to her. It’s heart-wrenching to see her walk out as her parents tearfully beg for her to stay, but we wouldn’t expect any less from her.

Ji Ah is also smart in letting her colleagues, Sae Rom (Jung Yi Seo) and Jae Hwan (Kim Kang Min), in on the supernatural happenings. In their past life, these two were the ones who watched over and took care of Ah Eum, so now Ji Ah is repaying their kindness by forewarning them and making sure they don’t unwittingly become collateral damage. 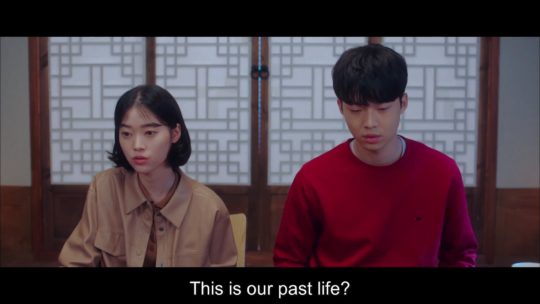 That aside, it’s also great to see a little more into the trio’s backstory. In fact, it was past-Jae Hwan who alerted Ah Eum to Yeon’s whereabouts. You can practically see little-Ah Eum’s ears perk up at this interesting little tidbit.

Ah Eum too is just as strong as Ji Ah. (Or the other way round. You get the idea). Yeon chooses to tell Ji Ah the whole story behind Ah Eum’s death and we see everything in clear detail. (Again, I love how the drama doesn’t drag these reveals out). After The Imoogi-possessed Ji Ah finds her way to Yeon, the two have an all out fight.

However, just as a sword is about to be plunged into Yeon, Ah Eum regains control and stops it. She’s horrified to see all the dead bodies around her (The Imoogi took her body on a killing spree) and begs for Yeon to kill her, but Yeon is naturally unable to do so. Yeon offers The Imoogi his body in exchange for letting Ji Ah go, but Ji Ah won’t let him have his way.

Instead, she asks Yeon to repay his debt, the one thing all foxes are bound to. (Prior to this, Ji Ah saved Yeon from some villagers while he was in a weakened state, and thus the “debt” was formed).

And with that, Yeon loses all free will as his hand morphs into a claw and plunges itself into Ah Eum. It’s a nice detail to have Yeon kill with his claws instead of the sword, which further emphasizes how helpless and not-in-control of his body he is.

Rang and Yeon (more or less) resolve their issues

Just like Ji Ah, Rang too is stuck in his own nightmare-scape. Even though Yeon chooses to come save Rang, the two are still greatly outnumbered by the mob of zombie-like spirits, and their bodies in the real world show mirroring wounds. They manage to escape the hoard, but not before Rang is bitten and poisoned. After going round and round yet unable to find a way out, Rang loses his strength and whines about giving up, which aggravates Yeon greatly. 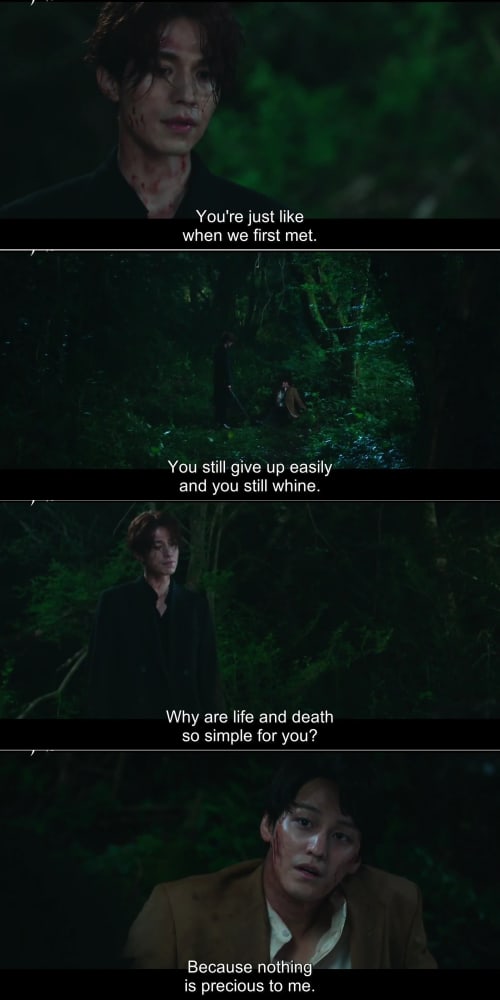 Rang retorts that he doesn’t have anything to live for, heck even his own brother tried to kill him so many years ago. And that’s when Yeon yells for him to get his head on straight and figure out why he’s still alive. Rang finally realizes his brother never meant to kill him and this is enough for him to get up and continue moving. 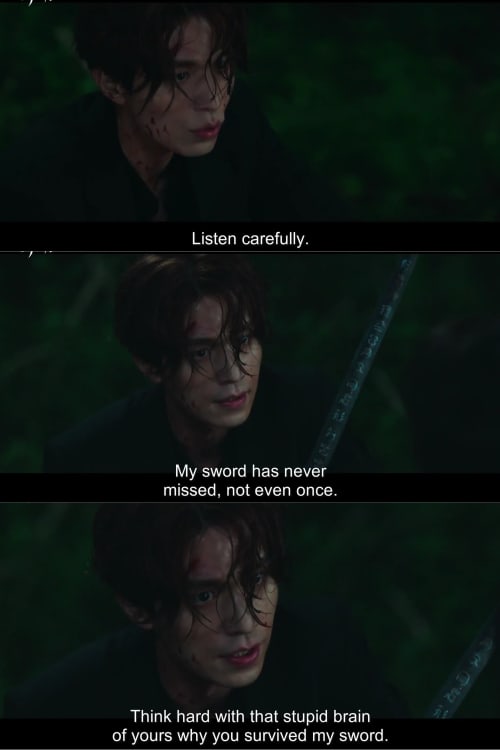 Eventually, they deduce that the way out is across a ravine, so Yeon has Rang jump across first while he fends off the hoard that had caught up. One of the spirits, sporting the face of Rang’s mother, follows Rang across and clutches on to him, dragging him downwards. Yeon sees Rang struggling, so he jumps across and grabs onto the spirit and falls into the ravine together. Next thing we know, Rang is awake in the real world.

Again and again, we’ve seen Rang intending to cause harm to Yeon. But upon realizing that Yeon didn’t make it out of the nightmare-scape, Rang is actually anxious about his safety. Having finally resolved the centuries-long misunderstanding and accepting how he feels about his brother, Rang begins to reconsider his “partnership” with The Imoogi and The Butler (Uhm Hyo Sup). However, that’s when we learn that Rang is bound by a “debt” of his own. The Butler was the one who saved Rang all those years ago after he was attacked by Yeon and it appears to all be part of The Butler’s scheme to “own” Rang.

Wanting to find a way to break the debt-bond, Rang even takes a risk and goes to the Afterlife Immigration Office — where he sees wanted posters of himself — to ask Granny for a solution. Unfortunately, the only way to break the bond is by… death.

Shin Joo and Yoo Ri going all in

When Rang succumbs to the poison from the zombie bite (back in the real world), Yoo Ri (Kim Young Ji) tearfully drags Shin Joo (Hwang Hee) over to help Rang. And even though Rang was the one who brutally attacked him before, Shin Joo puts aside his feelings and treats him. This selfless act confuses Yoo Ri, to which Shin Joo replies it’s because he couldn’t bear to see her cry.

In many ways, Shin Joo and Yoo Ri are very similar. Both have wounded pasts and both found new lives after being shown kindness by the Lee brothers (and as such have become so fiercely loyal to them). These commonalities further bring these two together, but it’s Shin Joo’s checkered past that seals the deal for Yoo Ri. After learning of his tough side (Shin Joo was nicknamed “Crazy Fox”), Yoo Ri completely falls for him, so much so she propositions him on the spot.

This couple really is so adorable together and it’s great to see a fun, lighter relationship that balances out the heavier Yeon-Ji Ah one. It’s also great to see the characters interacting more with each other, which gives us new dynamics to explore. And really, the cast all have such great chemistry, so all the scenes are entertaining to watch, regardless of who is paired up. 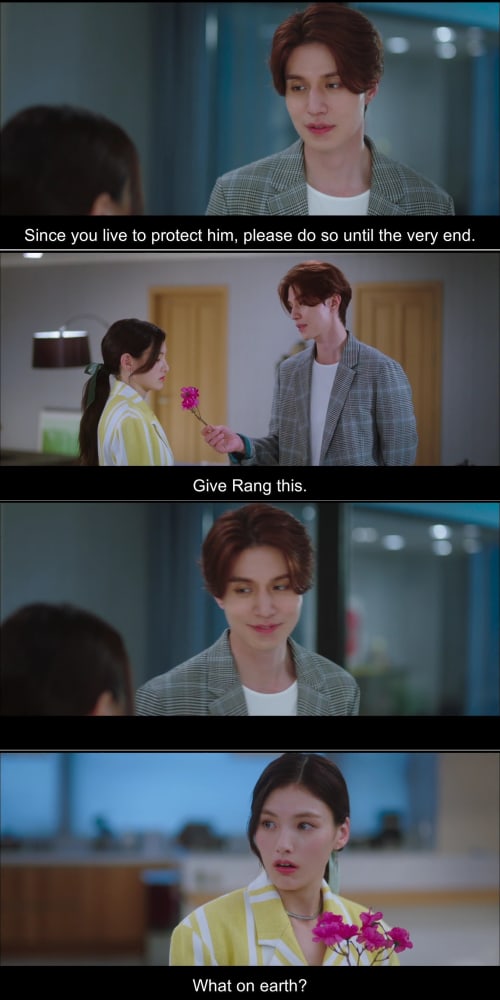 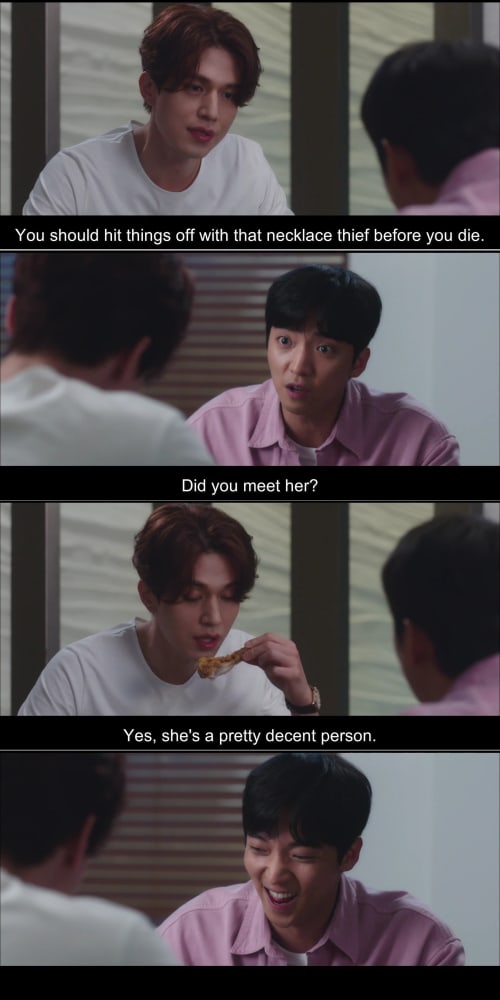 Just look at how happy Shin Joo is to have Yeon’s seal of approval!

Yeon goes on the offense

Yeon is literally an all powerful (ex-)mountain spirit, so it would have been disappointing if he were easily tricked or outsmarted all the time. But more often than not, he’s the one who is two steps ahead. From the moment he figures out that The Imoogi is back in business, Yeon has been trying to lure him and his lackies out. The nightmare-scape provides such an opportunity to him, as he utilizes his “fall” and pretends to be trapped, all weak and powerless (but still looking sooooo good *cough*).

After Yeon keels over in the nightmare-scape, the Spirit of Darkness finally appears before him. With his last few breathes, he begs to know whether Ji Ah has made it out of her own nightmare-scape. After she confirms that Ji Ah has indeed made it out, Yeon gets up, brushes himself off, and becomes his old, very healthy, self again. He taunts the Spirit of Darkness for falling for his ruse (“Did you really think a lowly spirit could so easily make me fall?”), then he stretches his arm out past her shoulders and grabs onto The Imoogi (who’s linked to her in the real world). Yeon warns him that he’s coming for him, right before he finishes off the Spirit of Darkness.

After making it out of the nightmare-scape, Yeon also correctly deduces that with Rang’s heart now swaying, The Imoogi and The Butler would want to meet with him, and thus puts Shin Joo on his tail again. Rang leads Shin Joo right to their house and this allows for Yeon to make a surprise visit. After being in the dark for most of the earlier episodes, Yeon is now on the offensive, and it’s so darn sexy!

The Imoogi ventures out into the world

With The Imoogi now being a full grown not-so-human being (played by Lee Tae Ri), it stands to reason that he’ll be making a move rather than staying cooped up in his manor. And he does. He wedges himself into Ji Ah’s production team as the new intern, and goes by the name… Terry. Heh! He even manages to win Ji Ah’s approval with his work ethic, and can we really blame her? After all, Terry looks like a harmless college kid with his boyish good looks and puppy crush. Lee Tae Ri does a great job shifting between his two personas. Just as you let your guard down around him, his expression changes and you’re reminded that he’s a literal snake.

It’s also exciting to see Yeon and Terry finally come face-to-face with each other as the two have a speed-brawl before they end up on a rooftop. Terry tells Yeon that he has control over everyone he cares about — his brother, his woman, even his woman’s parents. He’ll let them all live on one condition — Yeon has to give up his body.

It’s been mentioned a few times that The Imoogi wants Yeon’s body. The reason behind his hatred for Yeon is because all that he had — his mountain spirit status and Ah Eum — were all supposed to be his. But Yeon is no longer a mountain spirit, and I doubt his body had anything to do with him being so in the first place, so why covet his body? Yes, it’s a good-looking body, but as far as reasons (for a centuries-long feud) go, this one seems odd. Hopefully, the show will give us more insight into this in the next episode and really flesh out The Imoogi’s reasonings and intentions, so we can have a truly formidable foe. Or… is The Imoogi also a pawn in someone else’s game? Mayhaps… The Butler?

Who do you think is more evil? The Imoogi or the Butler? And do you think Yeon made it rain just so he could reunite with Ji Ah under his favorite red umbrella? Let us know your thoughts on episodes 9 and 10 in the comments below!

Belinda_C was absolutely tearing up when Ji Ah left her nightmare-scape parents. Talk dramas, SEVENTEEN, and Shinhwa with her on Twitter!