It’s official: both Hyun Bin and Son Ye Jin have confirmed that they’re in a relationship!

On January 1, Hyun Bin’s agency VAST Entertainment stated, “Actors Hyun Bin and Son Ye Jin met through their projects, and after the end of their drama, their positive feelings towards one another developed into a romantic relationship.”

The agency added, “We ask that you look warmly upon their relationship and cheer them on in the future.”

Son Ye Jin’s agency MS Team Entertainment similarly confirmed, “The two of them got to know each other through their acting projects, and after the end of their drama, they developed an interest in each other and ended up dating.”

Hyun Bin’s agency VAST Entertainment has responded to the report of his relationship with Son Ye Jin by commenting, “We are currently in the process of checking with Hyun Bin himself. After checking, we will release a statement.”

Dispatch has reported that Hyun Bin and Son Ye Jin are in a relationship!

On January 1, Dispatch published a report claiming that the two stars have been dating for the past eight months—and that their relationship began after the conclusion of their hit drama “Crash Landing on You.”

According to Dispatch, when the co-stars denied dating rumors multiple times in the past, they were telling the truth and were not, in fact, romantically involved at the time. However, a source close to Hyun Bin reportedly stated that around March 2020, the two developed romantic feelings for one another. The anonymous source commented, “I think that after the drama ended and they spent time apart, they began to miss each other.”

Dispatch claimed that Hyun Bin and Son Ye Jin met up several times to hang out with fellow actors following the end of “Crash Landing on You,” and during these get-togethers, they realized just how well-suited they were as a couple. They also reportedly bonded over their mutual love of golf.

Along with its report, Dispatch published photos of Son Ye Jin getting into Hyun Bin’s car.

Son Ye Jin’s agency responded to the report by stating, “We are currently in the process of checking with [the actress] after seeing the article.” 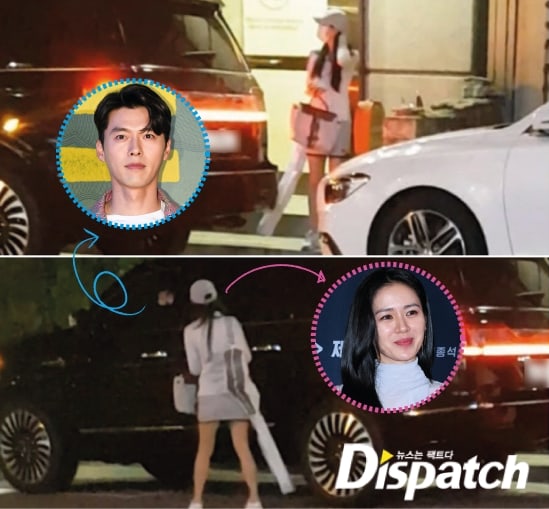 Hyun Bin and Son Ye Jin starred together in the 2018 film “The Negotiation” before reuniting in the popular drama “Crash Landing on You” in 2019. The two actors have been swept up in dating rumors multiple times since, but denied the rumors each time.