On the January 9 episode of MBC’s “How Do You Play?”, Yoo Jae Suk and Lee Hyori caught up via phone call.

When Yoo Jae Suk first called, Lee Sang Soon picked up the phone and shared what the weather was like at their home on Jeju Island. He said, “A lot of snow fell and now we’re marooned. A lot of snow fell here. Of course, our house is pretty isolated anyway.”

Lee Hyori came on the call, explaining, “I was sleeping.” She congratulated Yoo Jae Suk on his Daesang at the 2020 MBC Entertainment Awards and said, “I just woke up so I spoke more cutely than I intended.” Yoo Jae Suk said, “It was all thanks to you. I said that in my speech,” and Lee Hyori joked, “Don’t just thank me. Send me a present.” 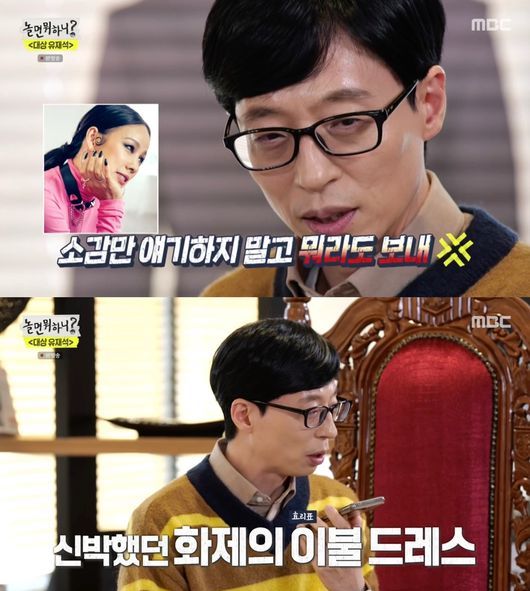 Yoo Jae Suk also asked Lee Hyori about her “blanket dress,” which garnered attention on social media. Although Refund Sisters was supposed to perform at the 2020 MBC Entertainment Awards, Lee Hyori could not attend due to the COVID-19 surge making it difficult for her to fly up to Seoul from Jeju Island. However, she accepted her award for Top Excellence in Music & Talk via video message.

Lee Hyori explained, “The trophy was delivered to me in a package about two days before the ceremony. It felt wrong to accept an award in sweatpants, [so I came up with the blanket dress]. It wasn’t bad, right? Lee Sang Soon filmed the video for me.” Yoo Jae Suk said admiringly, “You’re a variety show genius.”

Lee Hyori also mentioned Defconn, who has been filming with Yoo Jae Suk on “How Do You Play?” recently. She said, “Are you filming alone? Is Defconn there? I want to meet him. Is he older or younger than me? I’ve never met him. There are some people in the entertainment industry whom I haven’t intimidated yet. I want to intimidate him a little.” 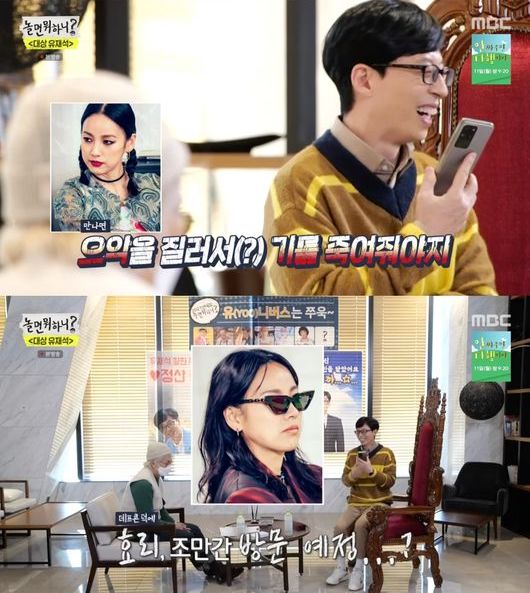 Yoo Jae Suk also called Rain, who said, “It was an honor and so much fun to work with you and Linda [Lee Hyori’s stage name for SSAK3]. I was really happy. I’m releasing a new song at 6 p.m. KST tonight [‘Switch to Me,’ his duet with Park Jin Young] and I’ve been pulling all-nighters. I got a nosebleed because I was pulling so many all-nighters on this album.”

Yoo Jae Suk
Lee Hyori
Rain
How Do You Play?
SSAK3
2020 MBC Entertainment Awards
How does this article make you feel?