On January 12, Lee Dong Wook posted photos of him posing in front of a coffee truck along with the text, “Thank you, Bbo. (feat. Lee Dong Wook user manual). As expected, you know me so well.”

The coffee truck boasts a banner that reads, “Oppa, drink this and gain strength! To all the staff of ‘Single in Seoul,’ please film safely. Hwaiting, I’m cheering you on! From Jo Bo Ah.”

The banner next to the coffee truck also includes a “user manual” about Lee Dong Wook that reads, “Dong Wook oppa might sometimes get irritated, whiny, or say weird things, but it’s all because he’s affectionate and wants to get closer to you. Please don’t be taken aback, and just endure it 10 times. You can become close friends.” 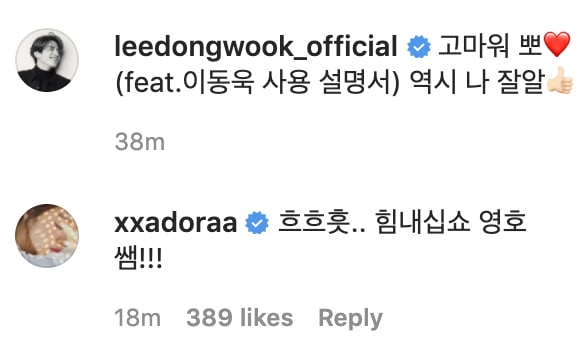 Lee Dong Wook’s upcoming film “Single in Seoul,” also starring Im Soo Jung and Esom, will follow the story of three single people being “single” in their own ways and focus on how things change once they cross paths. Lee Dong Wook will play Park Young Ho, an influencer who embraces his single lifestyle so well that he receives an offer to write a book about it.

Watch Lee Dong Wook and Jo Bo Ah in “Tale of the Nine-Tailed” below: