Gaon Chart has unveiled its chart rankings for the week of May 23 to May 29!

BTS dominated this week’s Gaon charts with their latest single “Butter,” taking No. 1 on the digital chart, download chart, streaming chart, bell chart, ring chart, and the Social Chart 2.0 for a total of six charts topped.

NCT DREAM guarded their spot at the top of the album chart for the third consecutive week with their first full-length album “Hot Sauce.”

Check out the top five for the main Gaon weekly charts:

NCT DREAM remained at the top of this week’s physical album chart with “Hot Sauce” for the third week in a row, and the kit versions of NCT’s “RESONANCE Pt. 2” and NCT 127’s “We Are Superhuman” appeared at No. 2 and No. 3. EVERGLOW’s “Last Melody” debuted at No. 4, and ITZY’s “GUESS WHO” shot up to No. 5. 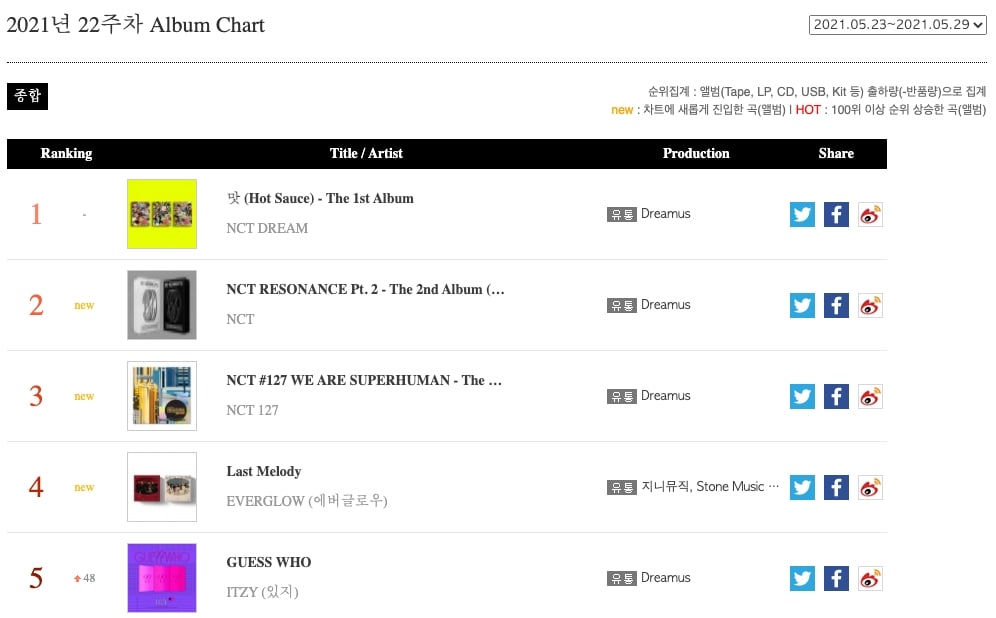 BTS’s “Butter” kept its spot at the top of the digital download chart for the second week in a row, while THE BOYZ’s “KINGDOM COME” from Mnet’s “Kingdom: Legendary War” entered the chart at No. 2. Heize’s “HAPPEN” maintained its ranking of No. 3, and Lim Young Woong’s “If We Love Again (Kim Feel Ver.)” from “Mister Trot: The Call Center of Love” debuted at No. 4. “Journey to Atlantis” (originally by LABOUM) sung by the MSG Wannabe TOP 8 of “How Do You Play?” rounded out the top five. 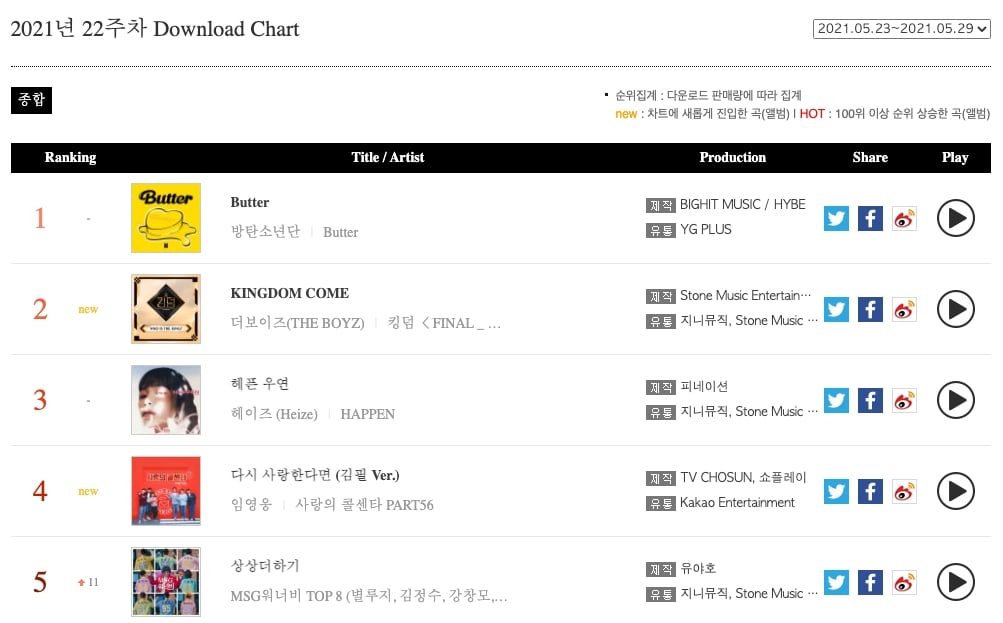 BTS’s “Butter” has gone up three steps to top the overall digital chart this week. Heize’s “HAPPEN” rose to No. 2, and Oh My Girl’s “Dun Dun Dance” followed at No. 3. aespa’s “Next Level” took No. 4 this week, and Justin Bieber’s “Peaches” (featuring Daniel Caesar and Giveon) came in at No. 5. 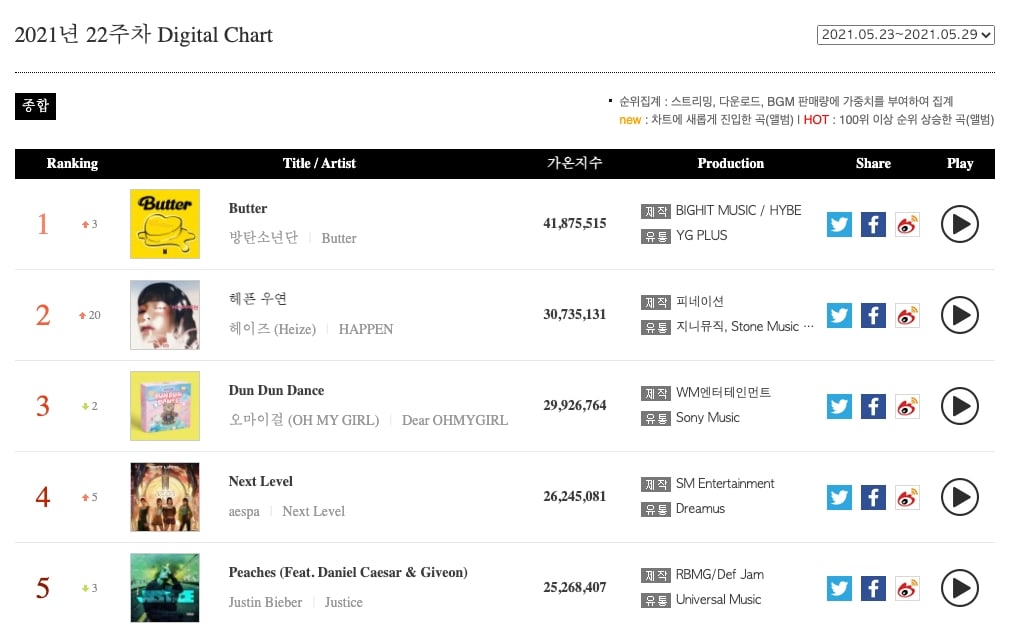 BTS’s “Butter” was No. 1 on this week’s streaming chart as well. Oh My Girl’s “Dun Dun Dance” and Heize’s “HAPPEN” each took No. 2. and No. 3 respectively, while Justin Bieber’s “Peaches” ranked at No. 4. Brave Girls’ “Rollin'” rounded out the top five. 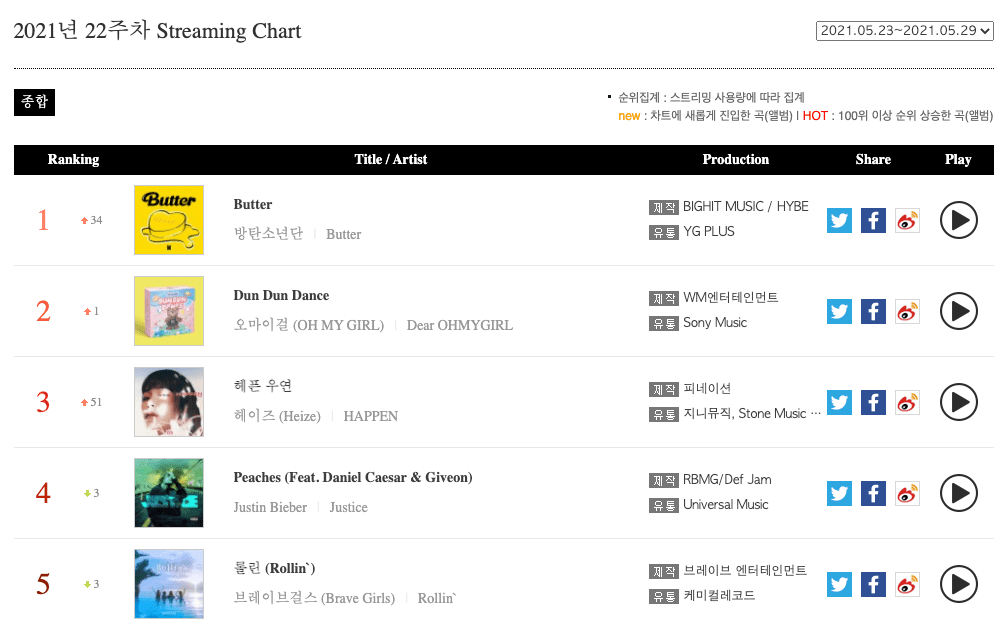 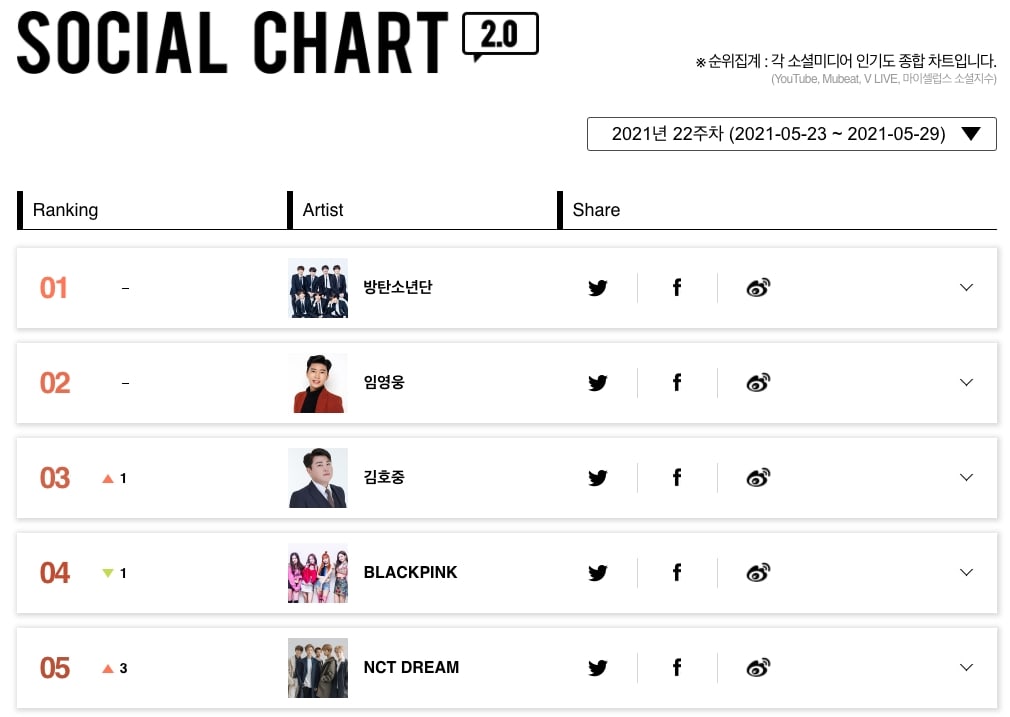