Anti-Heroes, Legendary Scams, And True Cases: What To Watch After “Taxi Driver”

Now that there’s no more “Taxi Driver,” the weekends just don’t feel as exciting anymore. The post-drama void hits especially hard since “Taxi Driver” was so thrilling and satisfying from start to finish. While rewatching this gem of a drama may help to ease the pain, starting a new show that has similar elements is also a good way to help you move on. If you need some ideas on what to watch next, here are a few recommendations.

Note: Since there’s already a comprehensive list of recommendations for dramas that are driven by revenge, this feature does not include the revenge aspect.

“Move to Heaven” & “Tomorrow With You” 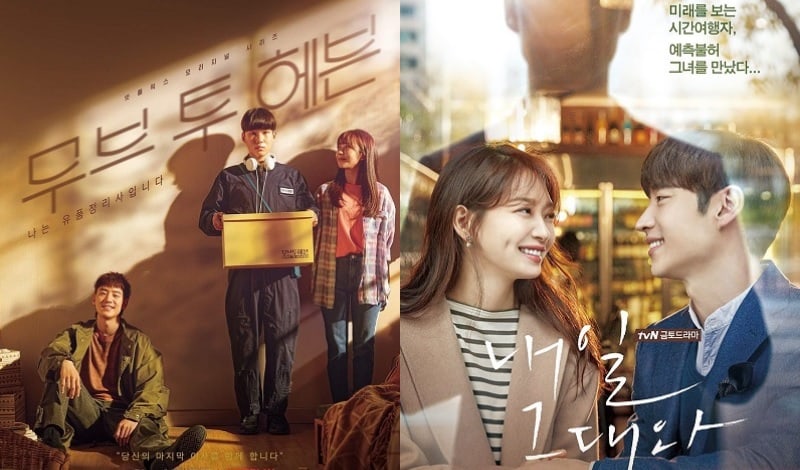 2021 is without a doubt Lee Je Hoon‘s year! And it’s so well-deserved. “Taxi Driver” was a huge success and his newest drama “Move to Heaven,” which was released just a month ago, has been receiving raving reviews as well.

Inspired from the essay “Things Left Behind” by professional trauma cleaner Kim Sae Byul, “Move to Heaven” is about former underground fighter and ex-convict Cho Sang Gu (Lee Je Hoon) who suddenly becomes the guardian of his autistic nephew Han Geu Ru (Tang Jun Sang). Together, they work as trauma cleaners and organize the belongings of the deceased. It’s a truly outstanding and utterly heartwarming little drama that teaches you a lot about love and compassion. And at the same time, it also sheds light on many societal issues. Be sure to prepare a box of tissues before you start watching!

If you want to see Lee Je Hoon from his romantic side, then “Tomorrow With You” is your right bet. It’s a fantasy drama about the CEO of a real estate company who can time-travel by taking the subway. When he discovers that his fate is linked to a former child actress and now aspiring photographer (played by Shin Min Ah), he marries her in an attempt to change their fates. The romance is quite fast-paced and there are many sweet moments between the couple. Lee Je Hoon’s chemistry with Shin Min Ah is simply off the charts!

Start watching “Tomorrow With You”:

“Samjin Company English Class” & “Because This Is My First Life” 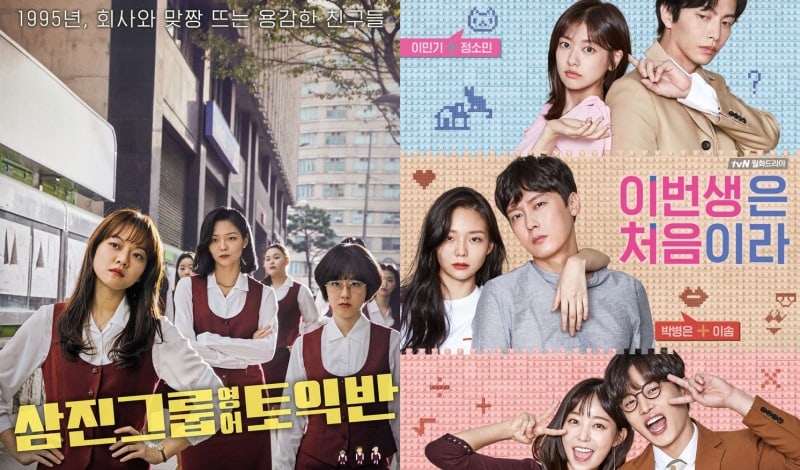 Model-turned-actress Esom has a knack for bringing strong female characters to life and giving them their own unique colors. Her role as a self-confident young office worker in her latest movie “Samjin Company English Class” earned her a Best Supporting Actress award at the 41st Blue Dragon Film Awards – and the judging panel even voted for her unanimously!

“Samjin Company English Class” recently won Best Film at the 57th Baeksang Arts Awards. The movie is set in 1995 and stars Go Ah Sung, Esom, and Park Hye Soo as three female friends who have been low-level employees at the same company for eight years. When they discover corruption in their company, they embark on a quest to uncover the truth. The movie is not only fun to watch but is also packed with positive and meaningful messages, ranging from female empowerment to the importance of environmental protection.

The romantic slice-of-life drama “Because This Is My First Life” also features Esom in the role of a tough woman who tries to find her own distinctive path in life. Three couples are at the center of the story and the female leads (played by Jung So Min, Esom, and Kim Ga Eun) are all best friends. They’re true friendship goals! The drama is a realistic portrayal of the love and life struggles young women face in today’s society, and it has a lot of heart. 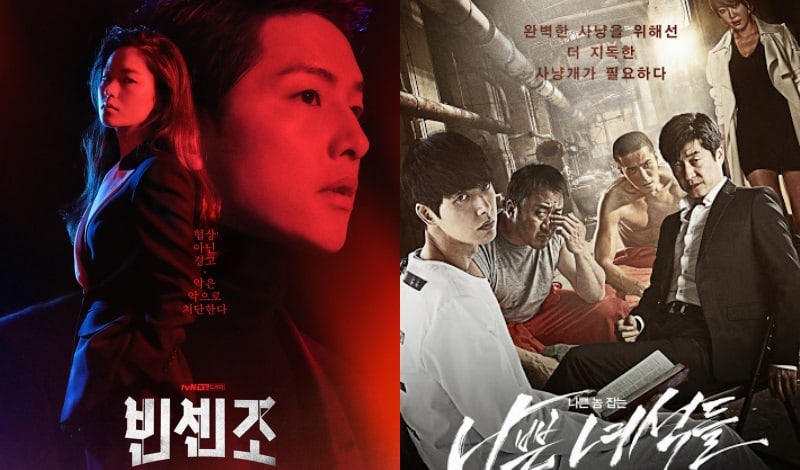 Anti-heroes are often more interesting than characters who are just black or white, so it’s easy to fall hard for them if we understand their motivations and can sympathize with them. And if they’re badass and looking hot like Kim Do Gi in “Taxi Driver,” that’s definitely another plus!

“Vincenzo” and “Taxi Driver” have been compared a lot since they both aired around the same time and feature hot anti-heroes who are out to take down villains. If you’re looking for less dark vibes compared to “Taxi Driver” and some mixed in romance, then try “Vincenzo”! Both are great shows. Song Joong Ki stars as Vincenzo Cassano, a lawyer and Mafia consigliere of Korean descent who was adopted to Italy as a child. When he returns to Korea, he gets involved with Hong Cha Young (Jeon Yeo Been), a lawyer who will do anything to win a case.

If you’d rather watch another very dark show that foregoes romance, then you might want to check out the OCN crime thriller “Bad Guys.” The story begins when Detective Oh Goo Tak (Kim Sang Joong) forms a team consisting of three very special people (played by Ma Dong Seok, Park Hae Jin, and Jo Dong Hyuk) to fight off crimes. As the title suggests, the leads are actually bad guys, namely criminals in prison, but you’ll quickly start rooting for them and their budding friendship as you learn more about their past. 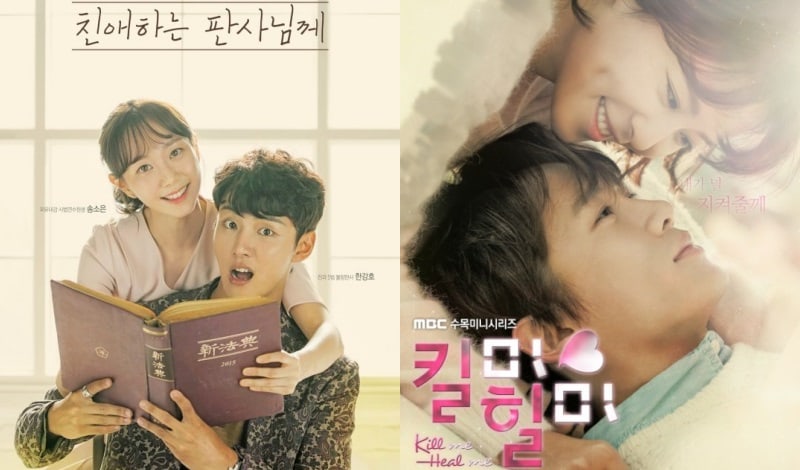 Kim Do Gi’s many transformations in “Taxi Driver” was definitely one of the main charms of the drama! It’s always amazing to see a talented actor showcasing his versatility by playing multiple roles in one show.

Legal drama “Your Honor” has actor Yoon Shi Yoon playing identical twins who live entirely different lives: While Han Soo Ho is a successful judge, Han Kang Ho is a petty criminal. When Han Soo Ho suddenly disappears, his brother takes his place and starts working as a judge. It’s a rather lighthearted series with lots of comedy and a beautiful romance between Han Kang Ho and law student Song So Eun (Lee Yoo Young), but just like “Taxi Driver,” it explores what justice really is.

When talking about multiple roles, there’s a true classic that always must be mentioned, the healing rom-com “Kill Me Heal Me,” which stars Ji Sung, Hwang Jung Eum, and Park Seo Joon. If you haven’t watched it yet, then it’s high time! Ji Sung plays a character with multiple personality disorder and a total of seven(!) different personalities. It’s simply crazy to see so many characters that all feel completely different being portrayed by one and the same actor. You can’t help but be in awe, and it’s no wonder that Ji Sung won the Daesang (Grand Prize) for “Kill Me Heal Me” at the 2015 MBC Drama Awards. 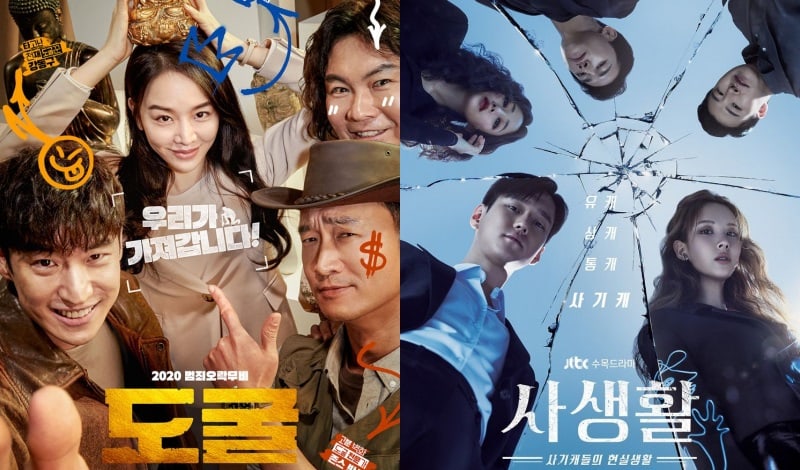 It was just so much fun to see Kim Do Gi outwit all those villains and scam them whenever he went undercover in “Taxi Driver.” If you enjoy stories that involve scams, you might want to check out Lee Je Hoon’s most recent movie “Collectors,” which also stars Shin Hye Sun, Jo Woo Jin, and Im Won Hee. It’s an action-comedy about grave robbers, and in order not to spoil anything, let’s just say that it features some pretty cool scams!

There’s also a drama that revolves entirely around scams: “Private Lives.” The Korean word for “private lives” can actually also be understood as a shortened term for “the lives of con artists”! The leads are played by Seohyun, Go Kyung Pyo, Kim Hyo Jin, and Kim Young Min, and all of them are con artists. While the plot can arguably be confusing at times and requires your full concentration to be able to follow, it’s a well-thought-out story, and it’s super fun to put the pieces together one by one to uncover the big picture. 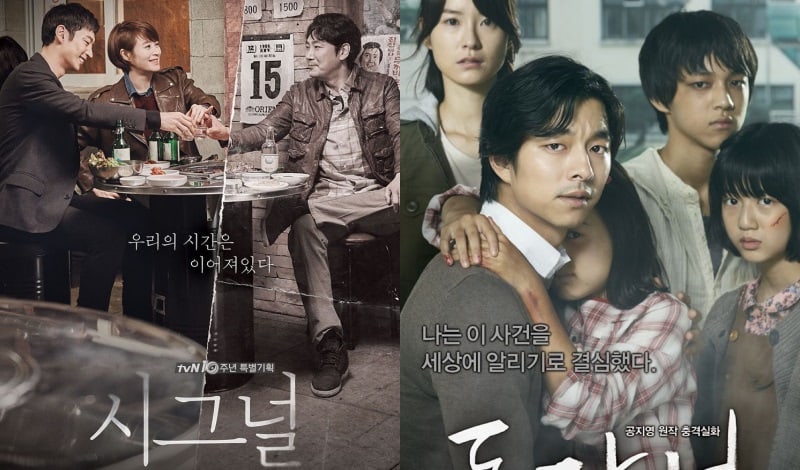 Even though Lee Je Hoon has been a big name in the movie industry for 10 years already, it wasn’t until “Signal” that he also received attention for his TV projects. In the fantasy crime thriller he plays police officer Park Hae Yeong who finds a walkie-talkie that allows him to connect to Detective Lee Jae Han (Jo Jin Woong), who is in the past. The two, as well as female detective Cha Soo Hyun (Kim Hye Soo) from the present, team up to solve cold cases.

“Signal” won Best Drama at the 52nd Baeksang Arts Awards and has rightly become a classic in the crime genre. It’s an absolute must-watch! And just like the cases in “Taxi Driver” are mostly depictions of crimes that happened in real life, “Signal” also features true cases like the “Hwaseong Serial Murders” or the “Miryang Gang Rape Case.”

Another true case that is depicted in the movie “Silenced” (also known as “The Crucible”) is the sexual abuse of hearing impaired children at Gwangju Inhwa School. The movie is lead by Gong Yoo, who plays a new teacher at the school who discovers the shocking truth. The case was first brought to attention when author Gong Ji Young published a novel on it in 2009. After it was also made into a movie that was released in 2011, public interest in the case finally exploded, which resulted in a retrial and stricter sentencing for the culprits. “Silenced” is a beautiful example on how media can have a positive influence on society.

Hey Soompiers! What will you watch next? Let us know in the comments below!

Currently watching: “Mad for Each Other,” “The Rebel,” “My Dear Guardian”
All-time favorite dramas: “Move to Heaven,” “Children of Nobody,” “My Mister,” “Ode to Joy,” “Back in Time,” “From Survivor to Healer”
Looking forward to: “Hospital Playlist 2,” “Nevertheless,” “The Devil Judge,” “The Day of Becoming You”

Soompi Spotlight
Bad Guys
Kill Me Heal Me
Signal
Taxi Driver
Silenced
Tomorrow With You
Because This Is My First Life
Your Honor
Private Lives
Samjin Company English Class
Collectors
Vincenzo
Move to Heaven
How does this article make you feel?