After 11 years, 3,991 days, and 559 episodes, our dear Lee Kwang Soo has checked out of “Running Man.” As the “Asia Prince,” the “giraffe,” Yoo Jae Suk’s favorite “plaything,” one half of the “Easy Brothers,” leader of the maknae line… Kwang Soo’s impact on the show is undeniable. Week after week, he goes all out to entertain the viewers (and when there’s a mudflat, he’ll literally run all the way out), even at the expense of his actor image.

With the airing of his final episode last week, we’ve now officially entered an era without Lee Kwang Soo. So when you find yourself missing him a little too much, here are some episodes you can re-watch to help tide you over:

Episode 68 – The start of “Easy Brothers” 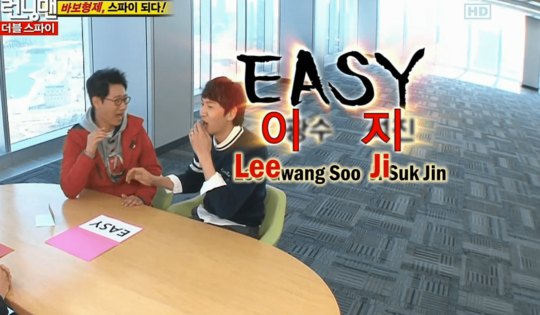 This episode was during the era of “spies,” and for this particular week, Lee Kwang Soo and Ji Suk Jin were chosen to be the spies. And thus, came the birth of the “Easy Brothers” (a play on their surnames). Though, little did they know, they weren’t the real main characters of the episode and instead were just the scapegoats so the real spies could get their work done. Despite so, “Running Man” history wouldn’t be the same without the Easy Brothers, nor the “Feel-Chok-Cross” chant, and honestly, we’re missing it already! 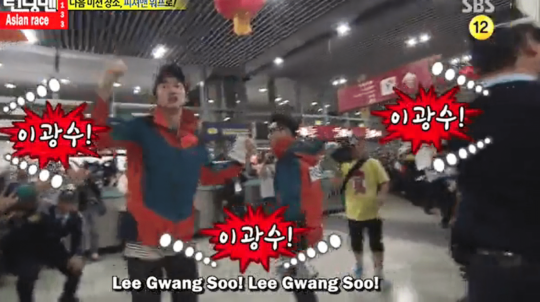 Kwang Soo’s popularity is particularly high in (South) East Asian countries, as seen when the cast travelled to countries like Macao and Vietnam for their Asia Race. The locals flocked to the airport to welcome the cast, and the screams were deafening, especially when Kwang Soo finally appeared. There were tons of Kwang Soo-related placards, and the camera even caught people dressed in giraffe onesies! He’s the bona fide Prince of Asia! 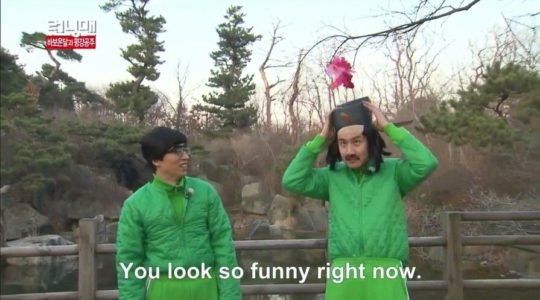 Kwang Soo’s expressions are always hilarious, like that specific one he has when he’s on really high platforms or when he’s playing silly characters. One very iconic one was during this “Princess and the Ondals” episode where he put on a bald cap and tried to eat a dried persimmon hanging from a hat. He actually did nothing more than stare at the dried persimmon longingly while rocking his body back and forth, but it was already super hilarious. Which is why we totally understand why Yoo Jae Suk insists he pays annual fees to the Comedian association.

Episode 141 – King of the animal kingdom, the giraffe 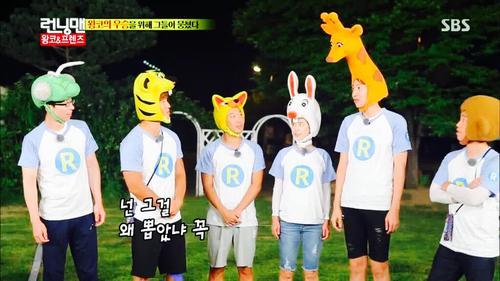 While Kwang Soo has plenty of “less than” images on “Running Man,” he’s actually one of the strongest ones too. His long limbs and strength make for a worthy contender (of course, betraying helps too), so he’s actually come up on top during name-ripping or solo missions quite a lot. This episode of “Animal Kingdom” had the cast turn into their animal counterparts, where Kwang Soo the giraffe (eight-year-old spoiler alert!) won the episode and was bestowed a golden crown. However, the gold coin on the crown broke off the moment he touched it. Just his luck! 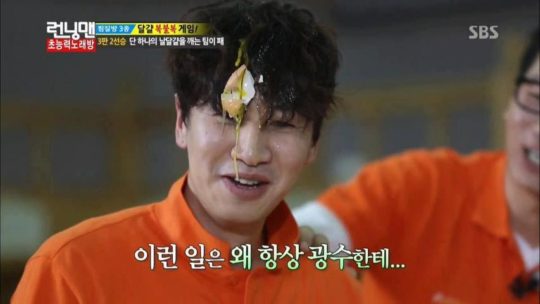 Speaking of his luck, even casual “Running Man” viewers will likely know that Lee Kwang Soo has really bad luck! He, along with Yoo Jae Suk and Ji Suk Jin, is more often than not included in the punishments, and if something is going to go wrong, it’s going to go wrong to him. His streak of bad luck was especially evident in this episode, where he somehow manages to always pick the raw egg on the first try. Even veteran comedian Lee Kyung Kyu was astounded by his (lack of) luck! Blessed by the entertainment gods indeed! 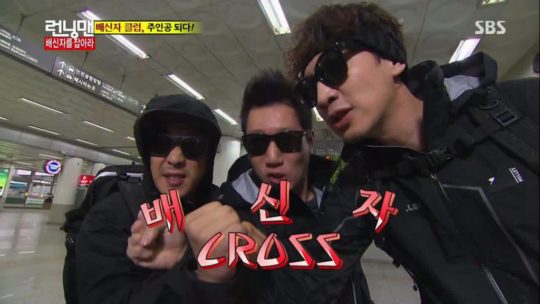 While we all know that Kwang Soo is actually a super warm-hearted guy, his image on the show can be quite the opposite. He got his start as a “rumor-spreader” in the very early episodes (often slandering his favorite noona, Song Ji Hyo), before this eventually gave way to more “despicable” betrayals. These forms of outright betrayals and cheating weren’t common on variety shows at that time, and his fellow cast members often joked that he was the pioneer for such a character on TV. For this episode, the show shined a spotlight on the Betrayer’s Club, a club consisting of HaHa, Ji Suk Jin, and Lee Kwang Soo, the three members who were most likely to betray others for their own benefits. 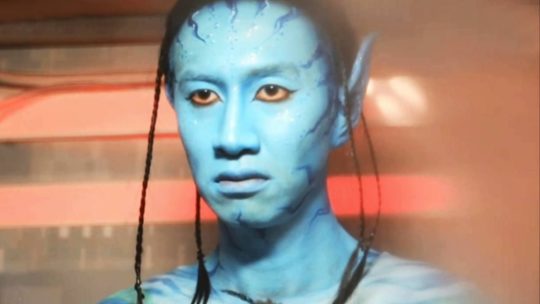 We’ve had plenty of cosplays over the years, and some, like the alien episode, or Jun So Min as Yondu from “Guardians of the Galaxy” are especially memorable. But one that especially sticks to mind is Kwangvatar. Kwang Soo was not only put in costume, but also completely body-painted over to resemble Avatars in this “Running Heroes” episode. His long limbs and tall stature really lent to the effect, and basically, the whole look was pretty on point (and hilarious). The beloved Kwangvatar made a reappearance in episode 336, and honestly, just a big hats off to Kwang Soo for always going all in for these cosplays. 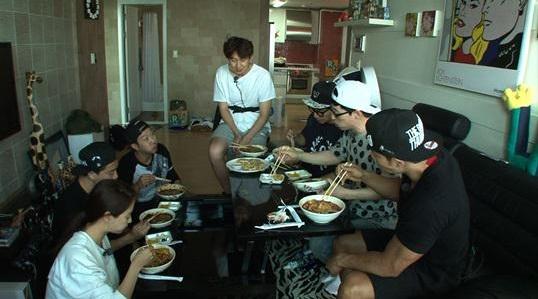 This was one pretty hilarious episode from beginning to end. First, the members invaded Kwang Soo’s new place for an unplanned housewarming gathering where they promptly started making themselves very much at home. Later on, there were various missions where Kwang Soo and the members tried to outwit each other (featuring Kwang Soo’s dad!), but in reality, it was more like out-acting each other. Because unbeknownst to Kwang Soo, this whole episode was just one huge prank on him. While Kwang Soo “won” the race, it was the other six members who were the true winners. And poor Kwang Soo only realized this when the episode finally aired. 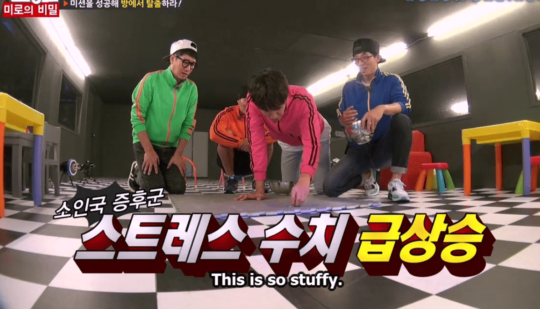 As “revenge” for the “Happy Kwang Soo Day” episode, as well as for all the times he’s been made fun of, teased, and “bullied” by the other members, Kwang Soo got in touch with the production team and planned a whole episode where the members would be stuck in one very annoying maze. And between getting chased and captured by mysterious men, constantly getting sent back to the start of the maze, crawling around in tight spaces, and being stuck in pedantic missions to get out of their rooms, the members were soon pretty frustrated. And while it looked like Kwang Soo was going to succeed, Sudden Commander Gary managed to figure out Kwang Soo’s true identity in time and prevented the latter from claiming victory. 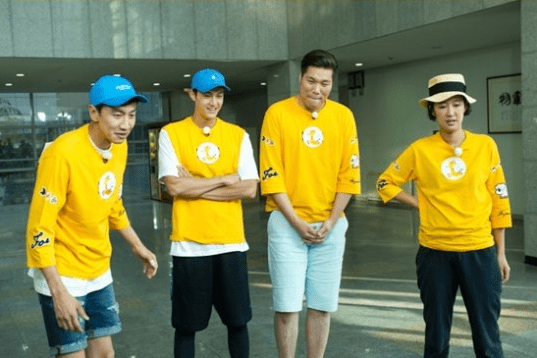 We could all use a little support from our friends, and for Kwang Soo the giraffe, his friends just happen to be super tall as well. Along with guests Seo Jang Hoon, Hong Jin Kyung, and Lee Ki Woo, the quartet formed the Giraffe team that went against the Running Man team in games of strength, wit, and…finger wrestling. And though the Giraffe team actually came pretty close to securing a win for Kwang Soo, they were still bested by Kim Jong Kook right at the very end. But it was still a happy ending as everyone, including the guests, planned for their next meet up at none other than Kwang Soo’s place. Heh.

Episode 520 – The lion does NOT sleep tonight 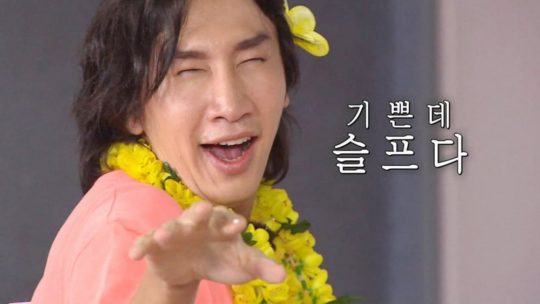 While on paper the concept of this episode might not have sounded very exciting (they were going to go round trying out new hobbies), but it somehow turned out to be one of the most ridiculously memorable ones in recent memory, and this was all largely thanks to Kwang Soo. From his “sad while happy” expression, to his magical rendition of “The Lion Sleeps Tonight,” he was the undeniable MVP of the whole episode! 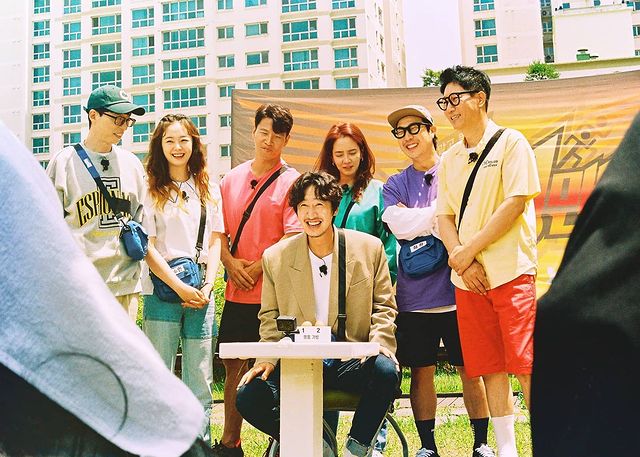 And here we are, Kwang Soo’s final episode. (I was a goner the first few minutes in when the episode had a flashback to Kwang Soo’s very first appearance. Also, the reappearance of his mustache was a total full circle moment). The gist of the episode was that Kwang Soo had to “atone” for all the crimes he had committed over the course of the show. And hilariously, his jail sentence was well over a 1,000 years. So the cast set out to lessen his sentence while also garnering chances for Kwang Soo to win presents from the production team. However, in the end it was revealed that those presents were actually prepared by Kwang Soo himself and were meant for his castmates. He’s really the sweetest and the most generous, and all those notes and letters from the staff are proof of how much he’s loved.

Your presence on the show will be missed greatly, Kwang Soo! Come back and visit when you can! 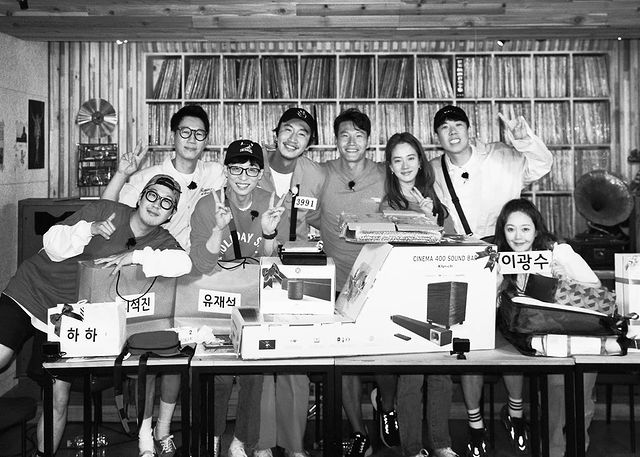 Which side of Kwang Soo are you going to miss the most? Which other episode comes to mind when you think of Kwang Soo? And if you’ve watched the farewell episode, how much were you crying by the end? Let us know below!

Belinda_C is also going to really miss the KwangMong sibling interactions! And she really wanted to give Yang Se Chan a hug during the very end of the farewell episode too. Poor guy.