Sparkling—which consists of ATEEZ’s Yunho, Seonghwa, and San, as well as Boys Republic’s Suwoong—is a fictional boy group from KBS’s “Imitation,” a drama based on a popular webtoon about idols in the competitive entertainment industry.

On the latest episode of “Yoo Hee Yeol’s Sketchbook,” the four members of Sparkling appeared as guests on the popular KBS music talk show—while remaining in character the entire time.

Introducing the group, host Yoo Hee Yeol playfully remarked, “Honestly, there may be some viewers who are looking at Sparkling and thinking, ‘Haven’t I seen them somewhere before?’ In fact, there’s a rumor that they’re actually ATEEZ and former Boys Republic members. Is that true?”

Sparkling member Se Young (i.e., ATEEZ’s Seonghwa) replied with a straight face, “We debuted around the same time as ATEEZ, so there were suspicions that we looked similar.” Meanwhile, Hyun Oh (Suwoong) hilariously chimed in, “I’ve heard a lot of people tell me that I look like Boys Republic’s Suwoong, and I think of it as a great honor.”

Yoo Hee Yeol also jokingly asked Lee Yoo Jin (Yunho) if his romance with Tea Party’s Ma Ha (played by Jung Ji So in the drama) was going well, leading him to explain with a flustered laugh that they were just good friends. 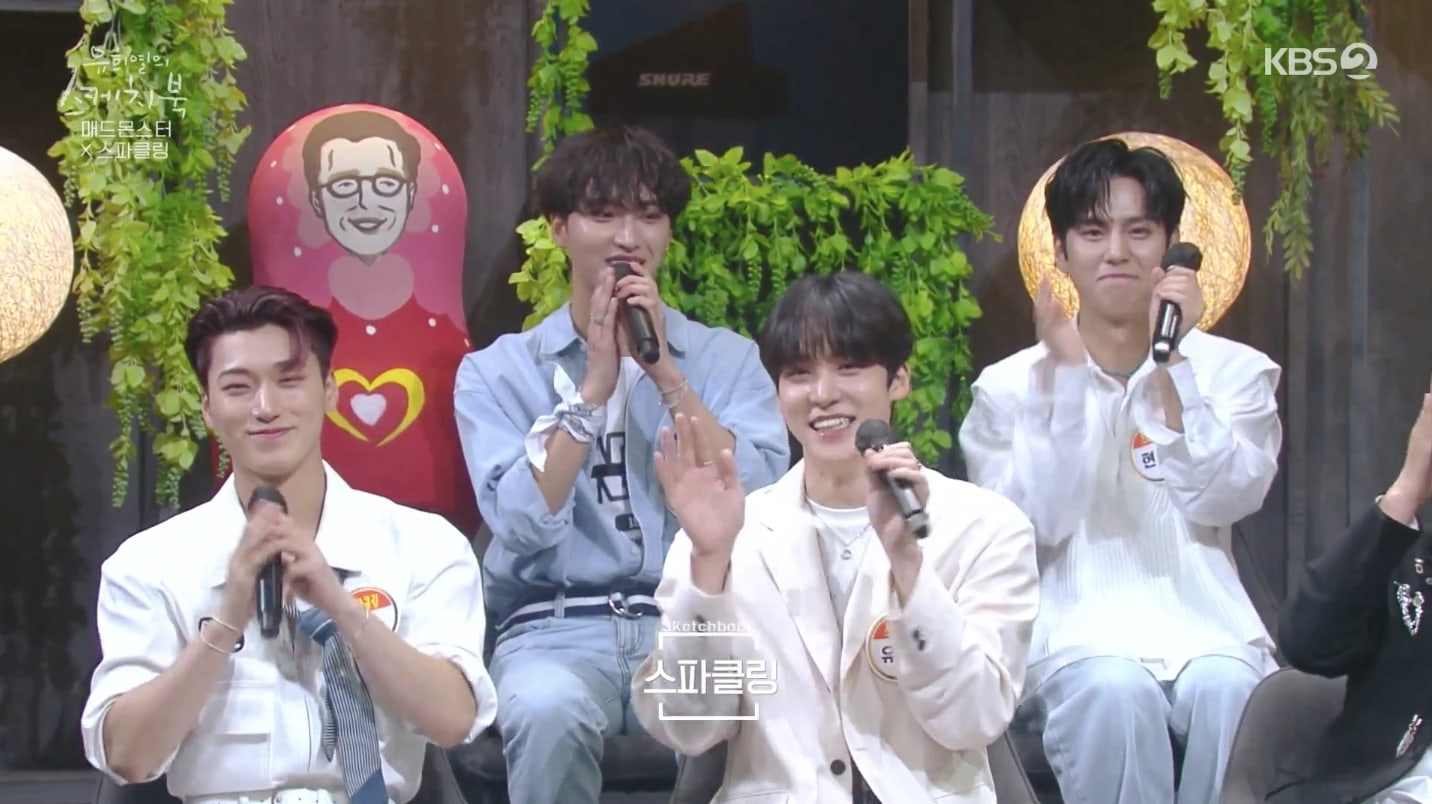 Later on in the show, Yoo Hee Yeol asked Sparkling whom they considered their rivals, and Lee Yoo Jin (Yunho) playfully replied, “I’ve never really thought about it before, but among the groups that debuted in the same year as us, there’s a group called ATEEZ. I think that group is really cool, and the Sparkling members look up their fancams a lot. I’ve especially been watching Yunho’s, Seonghwa’s, and San’s fancams a lot.”

Lee Yoo Jin (Yunho) went on to bring up ATEEZ’s new song from the final round of Mnet’s “Kingdom: Legendary War,” commenting with a laugh, “ATEEZ’s song ‘The Real‘ is really cool.” Yoo Hee Yeol agreed, “It is, it’s such a good song.” He then asked if Sparkling could dance to the song for them, and the three ATEEZ members readily complied.

After their performance, Yoo Hee Yeol joked, “I feel like you guys were way better than ATEEZ.”

Hyun Oh (Suwoong) also showcased his vocal talents with a live cover of one of Yoo Hee Yeol’s most famous songs, Toy’s “That I Was Once by Your Side.”

Sparkling then wrapped up the show by performing their new song “DIAMOND” as their characters from the drama.

…and check out the full episode of “Yoo Hee Yeol’s Sketchbook” here!