K-pop idols are known for being at the forefront of the style world, and one of the fashion boundaries they’ve been pushing more and more in recent years is that of gender. Idols have proved that fashion transcends gender by opting for androgynous looks or trying out gender-swapping trends — and one such trend that we can’t get enough of is male idols in skirts. While many male groups have tried cross-dressing as female idols for fun performances, fewer have embraced skirts as a facet of their masculinity, challenging gender norms with their fashion choices. The male K-pop stars in this article have rocked skirts for their work or just in their everyday lives, proving that we need to rethink the idea that this clothing article is just for women!

Given that he’s the reigning king of fashion, it’s no surprise that G-Dragon was one of the first male idols to embrace skirts. Donning them for various photo shoots and performances, as well as in his casual wear, GD demonstrates how versatile the skirt can be: he can make it street style, formal wear, or part of a totally regal-looking outfit befitting of fashion royalty. Check it out, and be sure to watch his effortless skirt style in the performance of “Crooked” below: 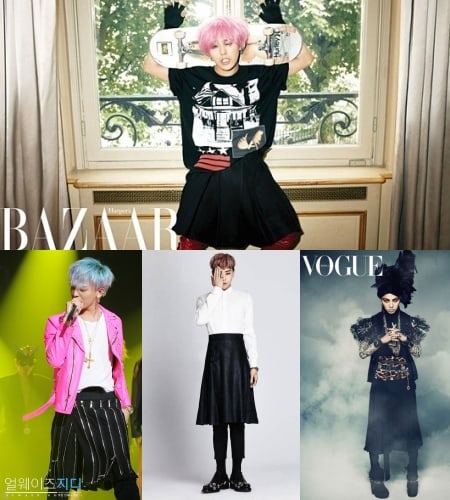 ATEEZ’s fearless leader is also fearless in fashion: Hongjoong made skirts and semi-skirts his staple during the group’s “INCEPTION” and “THANXX” era. He even revealed on a V LIVE that he asked his stylist to give him more skirts because he loved how they looked when he danced — and we have to agree! See for yourself in the “INCEPTION” performance below: 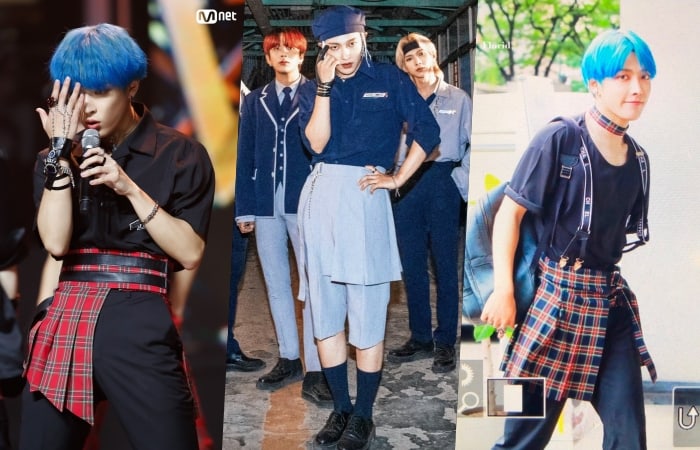 SHINee has a double threat in Taemin and Key: the former is known for smashing gender norms in his style, music, and dance, and the latter is an indisputable leader in the K-pop fashion world. The two have enriched their wardrobes with a variety of skirts for photo shoots and performances.

TXT is quickly becoming a group of skirt-wearing aces, with several members trying skirts out for various occasions: from Huening Kai’s outfit at the 2020 Golden Disc awards (right photo below) to Yeonjun’s stunning, downright regal white dress for “The Chaos Chapter: FREEZE” concept photos (left below). And of course, we can’t forget Soobin’s semi-skirt for “Can’t You See Me” — check it out in the performance below! 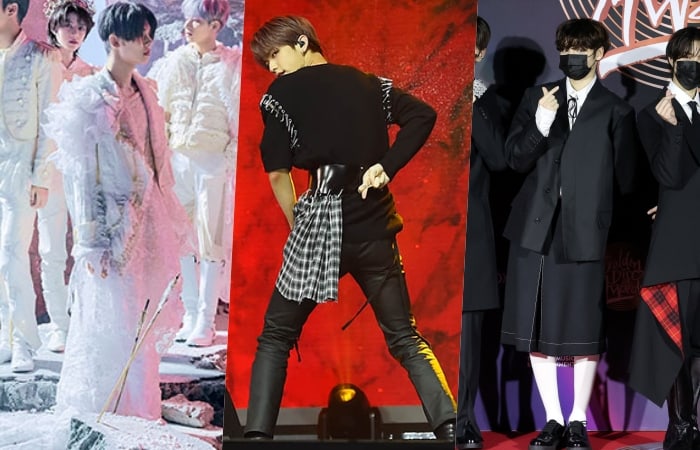 EXO’s two youngest members are fashionistas in their own right, frequenting fashion shows and generally looking incredible in anything and everything. The pair has tried out skirts for a variety of elegant photo shoot looks in magazines such as Dazed, Esquire, and L’Officiel Hommes (from left to right below). 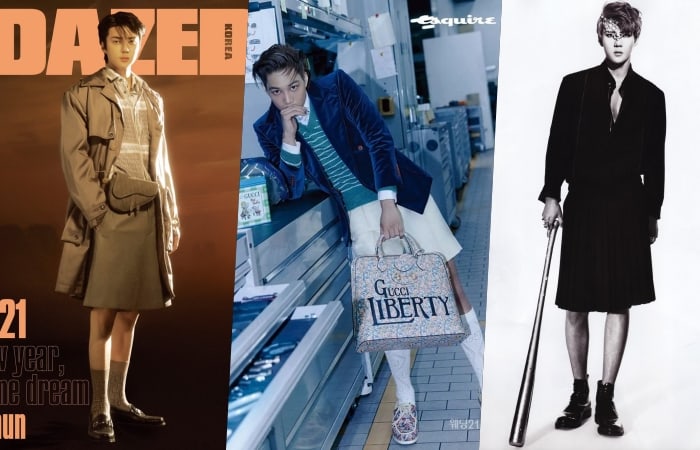 Ren is known for his delicately beautiful features, which the NU’EST member played up when he modeled skirts and dresses for China-based online mall VIP Shop back in 2016. In a tweet, Ren later made it clear that this photo shoot was perfectly compatible with his masculinity, stating that even as a man, he can wear skirts and dresses as he pleases. 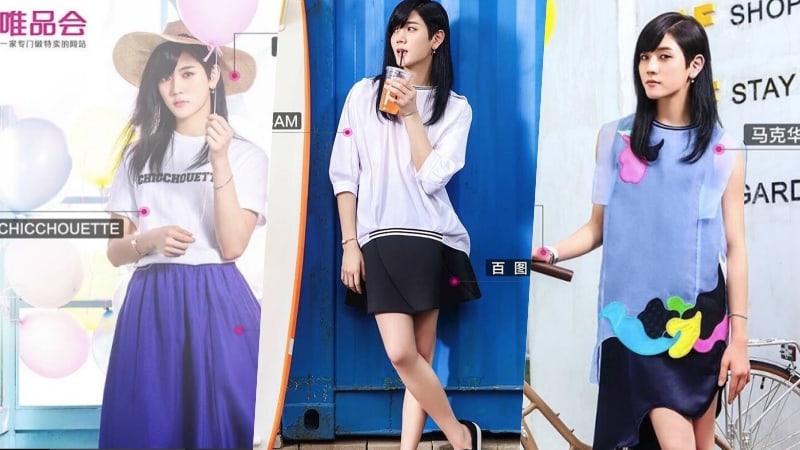 Am I a boy or a girl?
I am a man.?
Fashion makes a person and its impression#Fashion #skirt… https://t.co/Bwij9i53kG

Is there any BTS member who hasn’t worn a skirt? The guys aren’t afraid to rock skirts not only for photo shoots and MVs, but also on the street or in their casual wear. As the photos below prove, the guys know how to dress up or down with this fashion piece. Most recently, Jin donned one over his jeans for their “Butter” music video! 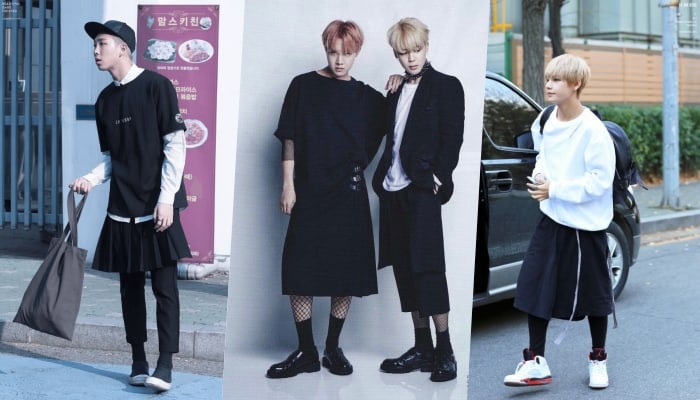 A.C.E has challenged gender norms from the get-go, when they boldly opted to wear short shorts in performances for their debut song “Cactus.” Alongside these powerful statement outfits, though, the group also showcased a softer side in teaser photos featuring skirts, corsets, and flowers. A.C.E is also proficient with makeup and nail polish, so it’s no surprise that the group has experimented with skirts too! 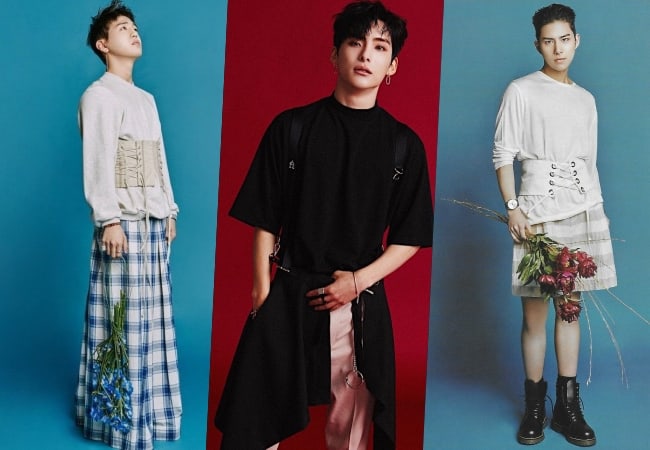 Another group that hasn’t shied away from skirts in photo shoots, GOT7 has shown a penchant for pleated kilt-inspired pieces. From Jackson’s bold studded number to BamBam’s soft, understated look, the guys demonstrate just how many different looks they can achieve with skirts! 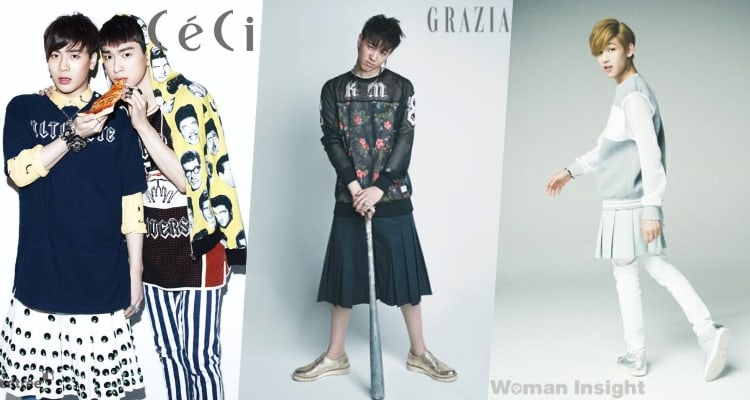 Few male groups have gone as all-in on skirts as NCT, with members spotted in them for music videos, awards shows, performances, and concept photos galore (like all of the below)! Yuta in particular has owned this trend, especially in NCT 127’s sleek “Simon Says” MV, but the group’s single “gimme gimme” takes the cake for the most members in skirts and semi-skirts. Be sure to check it out: 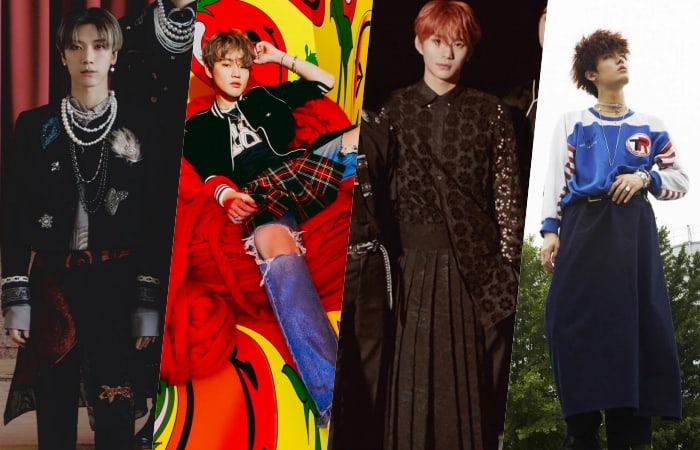 Jo Kwon takes a more gender-fluid approach than most idols, purposefully embracing a genderless image that, as the 2AM member has stated, “has become my weapon” (while this has in some cases been mistranslated as Jo Kwon coming out as nonbinary, the artist has not spoken on this matter). The empowering singer has cross-dressed and starred in the musical “Jamie” as a teenager who wants to become a drag queen — needless to say, there have been many skirts involved, and Jo Kwon looks amazing in them all! 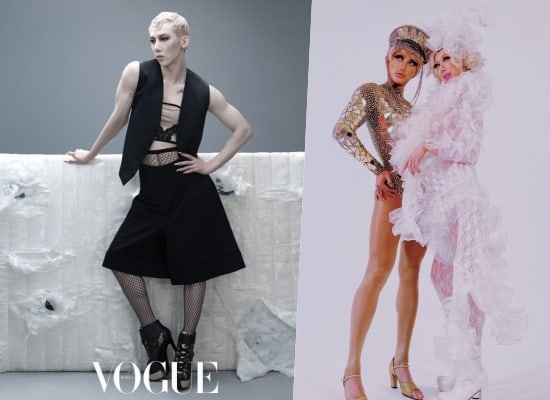 Hey Soompiers, which of these looks do you love the most? Are there other male idols that you would want to see try this fashion statement? Let us know in the comments!