According to Gummy, Jo Jung Suk is hoping to release more songs!

Gummy was the legendary singer on the August 7 episode of KBS 2TV’s “Immortal Songs,” meaning that the guest artists all performed one of Gummy’s songs that day.

Park Jin Joo, who sang Gummy’s “You Are My Everything” on the show, talked about working with Gummy’s husband Jo Jung Suk for the drama “Don’t Dare to Dream (Jealousy Incarnate).” She shared, “He’s very, very playful. He’s really fun. Regardless of whether or not he’s in front of the camera, he’s always funny in the same way.”

The show’s host Shin Dong Yup asked Gummy how Jo Jung Suk showed his support for her appearance as a legendary singer on “Immortal Songs,” and she shared, “When I was feeling unsure of whether it was okay for me to be sitting here, he encouraged me by saying, ‘You’re fully worthy of being there.'” 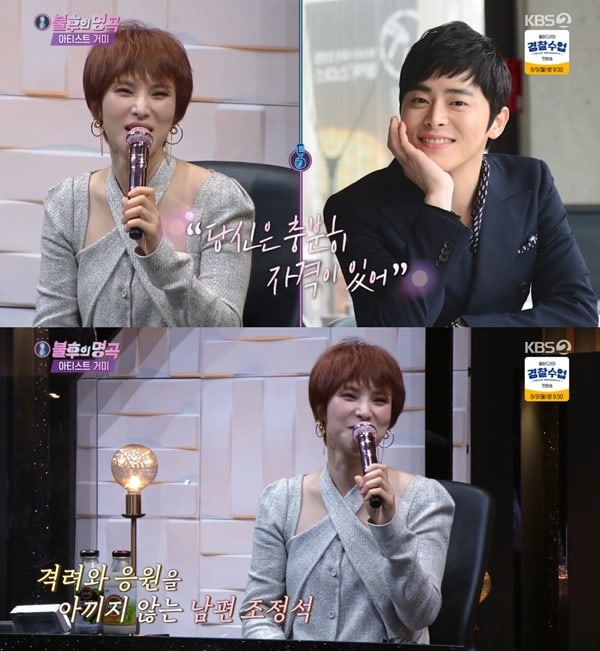 Shin Dong Yup also revealed a story of his own about Jo Jung Suk. “A while ago, I got on a phone call with Gummy while having a meal with Jo Jung Suk. I could barely say anything to her because Jo Jung Suk kept making her laugh,” he said. But Gummy recalled, “Jo Jung Suk said he kept laughing because of you,” and Shin Dong Yup hilariously responded, “I think one of us was very drunk.”

Shin Dong Yup mentioned Jo Jung Suk’s success on music charts with his hit song “Aloha” for the “Hospital Playlist” OST and asked Gummy, “Did you see your husband acting arrogant back then?”

Gummy replied, “At first, he couldn’t believe it. He’s still in disbelief about it, but he keeps wanting to sing. It seems like he’s considering releasing a song. He really loves music a lot.”

Weather broadcaster Kim Ji Hyo, who was part of the panel, revealed that she had known about Gummy and Jo Jung Suk’s relationship even before they went public. She explained, “I went to the same fitness center as them, and strangely, they kept coming at the same time. It turned out that they were dating.”

Gummy and Jo Jung Suk tied the knot in October 2018 and welcomed their first child in August 2020.