On the December 26 episode of SBS’s “Running Man,” the staff showed footage of the cast attending the 2021 SBS Entertainment Awards.

At the awards show, the Daesang (Grand Award) went to the entire “My Little Old Boy” team, rather than a single person. Ji Suk Jin won the SBS Honorary Employee Award, while Yang Se Chan won the Top Excellence Award in Talk/Variety. “Running Man” also won the Top Excellence in Programming Award. Kim Jong Kook, Ji Suk Jin, and Yoo Jae Suk were also named Entertainers of the Year along with nine other people. Yang Hyo Im, a writer on the show, won the Screenwriter Award.

Prior to the awards show, Ji Suk Jin’s name had been floated as one of the potential candidates for the Daesang. As a punishment on “Running Man,” Ji Suk Jin had a camera follow him around as he prepared for the 2021 SBS Entertainment Awards.

In the SBS building, Ji Suk Jin received a call from Lee Kwang Soo. Ji Suk Jin explained to him that he arrived early to prepare for his performance with Shin Hyo Bum. He also asked Lee Kwang Soo about whether he thinks he has the potential to win a Daesang. Lee Kwang Soo quipped, “In our last phone call, you told me that you thought you’d win. You recited your winning speech to me and asked me if I thought it was okay.” But loyally, Lee Kwang Soo added, “I’ll congratulate you in advance, hyung.”

Later, as the awards show began, Yang Se Chan arrived in the waiting room and said, “As befitting of a Daesang, you’ve put a lot of effort into your clothes. You’re definitely going to get it. The reason that they’re giving you so much to do is because it’s definitely you.” Yang Se Chan asked him what his wife thought, and Ji Suk Jin said honestly, “She said she doesn’t think I’ll get it. She isn’t easily swayed by others and forms her own judgment, and she’s usually right. She said, ‘I don’t think they’ll give the Daesang to ‘Running Man’ three years in a row.'” (Yoo Jae Suk and Kim Jong Kook won the past two Daesangs at the SBS Entertainment Awards.) 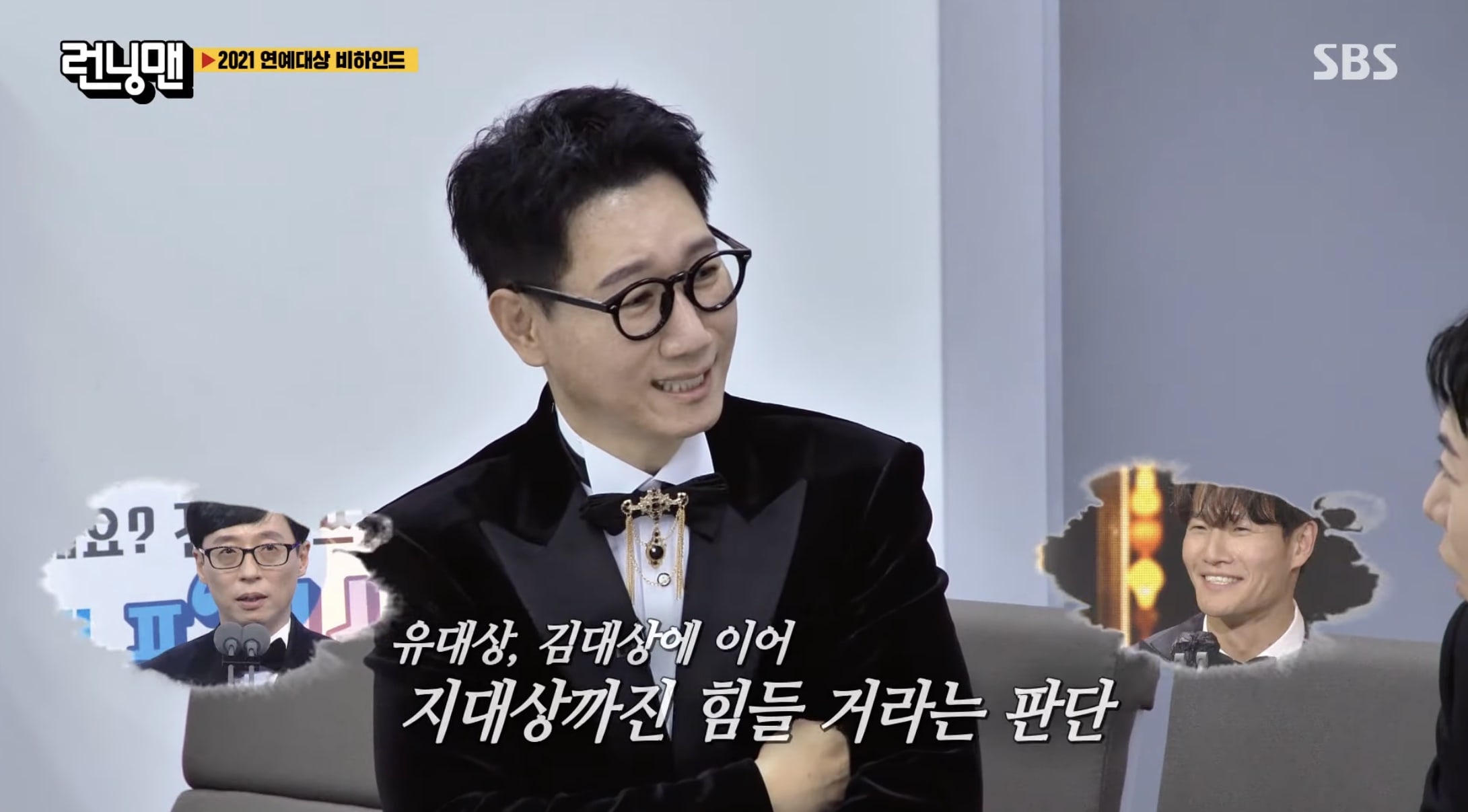 Ji Suk Jin confessed to Yang Se Chan, “I kept seeing articles predicting I’ll win, so I practiced giving the speech at home. My wife was away exercising, so I practiced the speech, but I couldn’t stay still. I thanked my parents, my in-laws, my family, the staff. I mentioned the ‘Running Man’ members, from Yoo Jae Suk to Kim Jong Kook. This isn’t a lie, but I started to tear up to the point that I couldn’t talk. I glanced at the mirror and suddenly realized, ‘What am I doing?'” Ji Suk Jin then lightened the mood with the joke, “When I thought about how long I’ve spent with the… How many members are there again?”

Ji Suk Jin also said about HaHa, “You’re the one who got my hopes up the most. You would text me things like, ‘You have to prepare the speech. Don’t call me HaHa, but Dong Hoon.'” Eventually all the members arrived in the dressing room with the exception of Yoo Jae Suk, who was recovering from COVID-19. HaHa said, “I was on the phone with him earlier and he said that this is his first time missing the Entertainment Awards.”

HaHa started psyching Ji Suk Jin up again, and Kim Jong Kook interrupted, “HaHa won the Top Excellence Award last year, and he’s been pretty active this year, so he also has an outside shot at the Daesang. But he worked too hard on [MBC’s] ‘How Do You Play?‘ recently.” 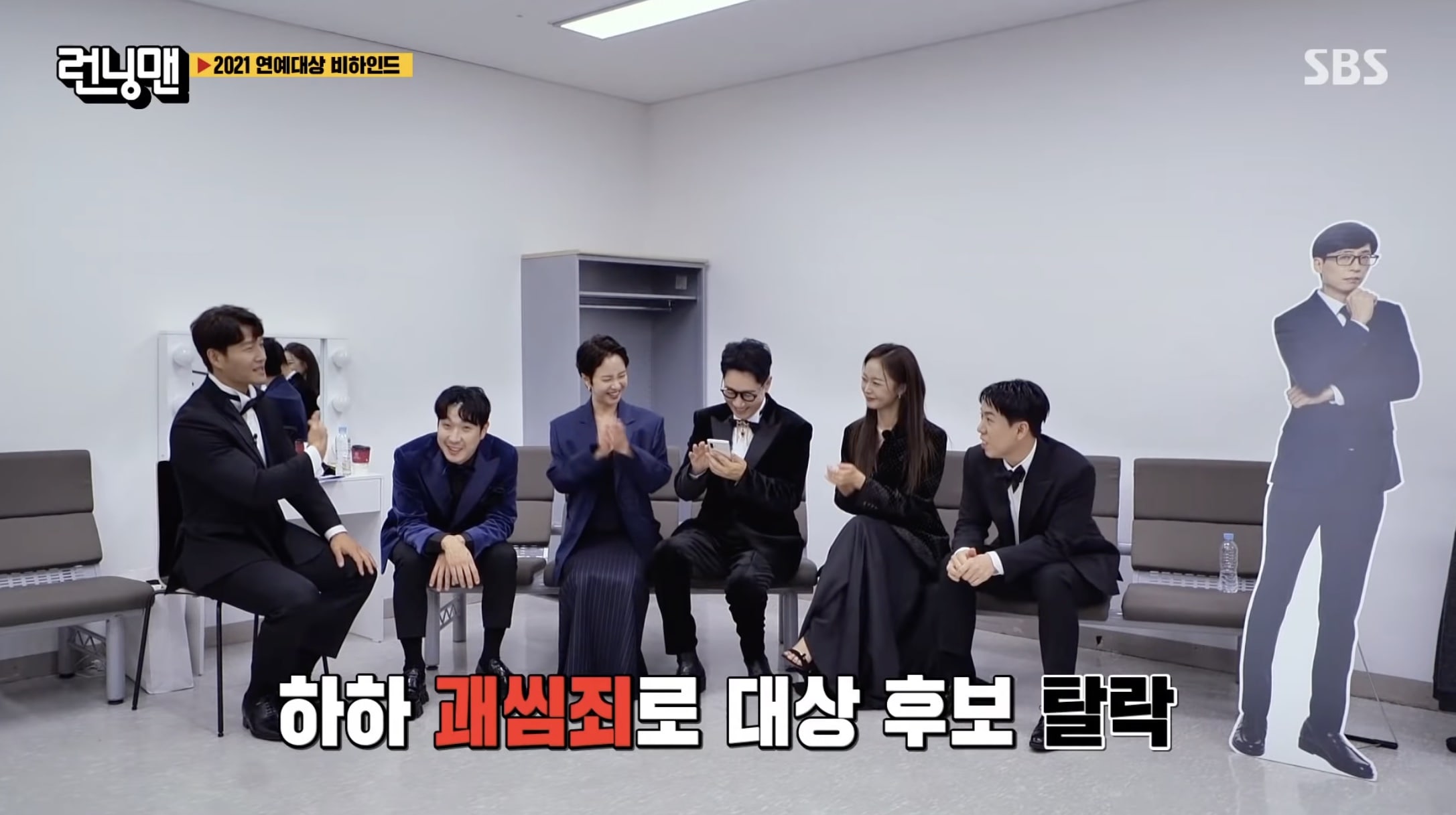 Ji Suk Jin called Yoo Jae Suk and told him, “It feels empty without you.” Kim Jong Kook chimed in, “He’s lying! His head is full with his own thoughts right now.” Yoo Jae Suk laughed and said, “I told HaHa this, but honestly tonight… it’s going to be difficult to pull off something extraordinary.”

Kim Jong Kook suggested Ji Suk Jin appear on [SBS’s] “Same Bed, Different Dreams 2 – You Are My Destiny” with his wife next year to try for the Daesang there, but Yoo Jae Suk joked, “If he goes on that show… it will be very difficult for him to win anything.” Kim Jong Kook took the joke further and said, “You’d definitely get the Daesang for sure if you went on ‘Dolsing Fourmen.'” Ji Suk Jin quipped back, “That would be complicated procedurally.” (“Dolsing Fourmen” is a new popular SBS variety show starring celebrities who are divorced.)

During the awards show, Ji Suk Jin had an awkward talk segment with ASTRO’s Cha Eun Woo. Yoo Jae Suk, who was watching the live broadcast from home, texted the cast immediately after, writing, “His live broadcast ad-libs are weak.” 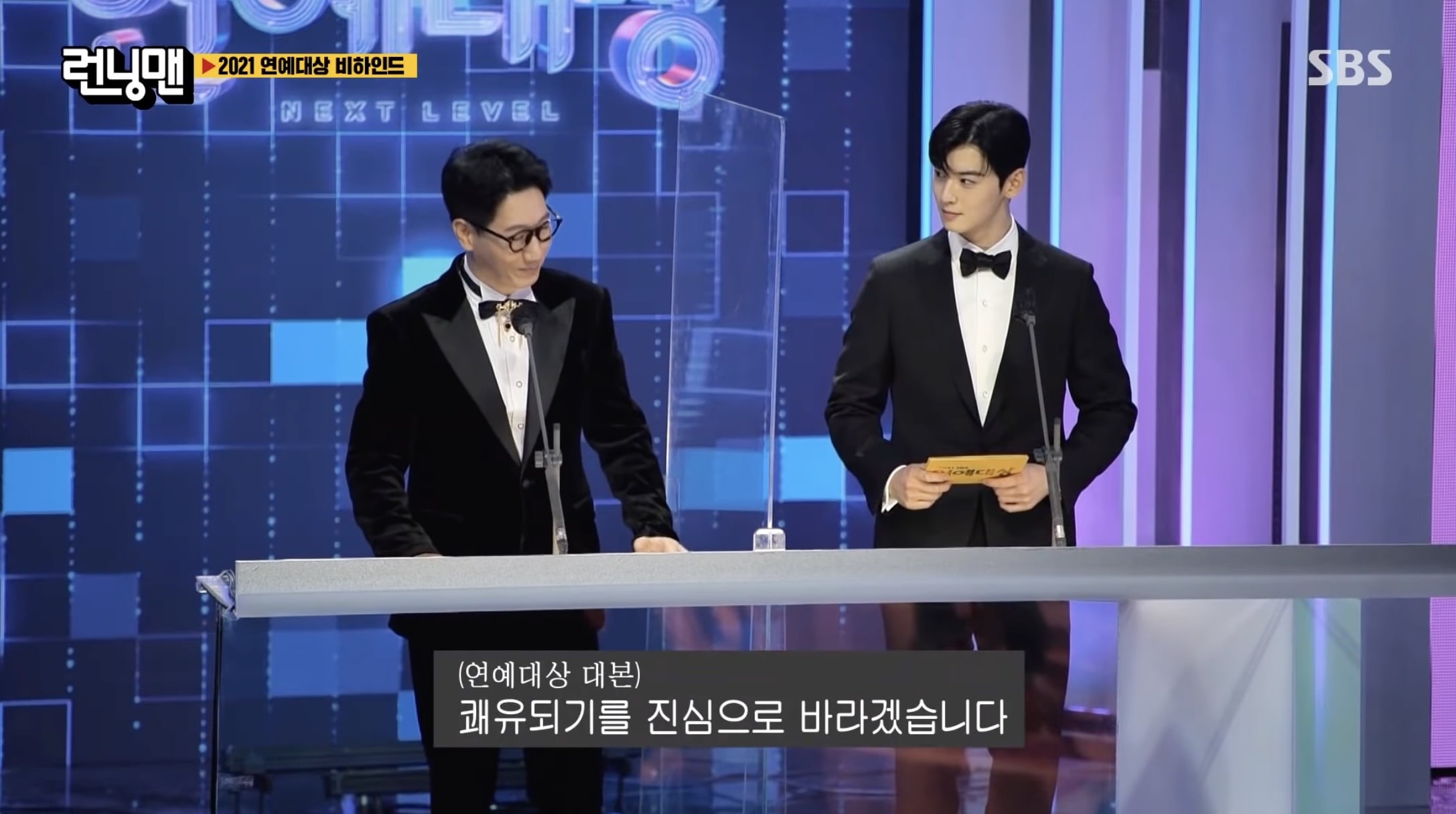 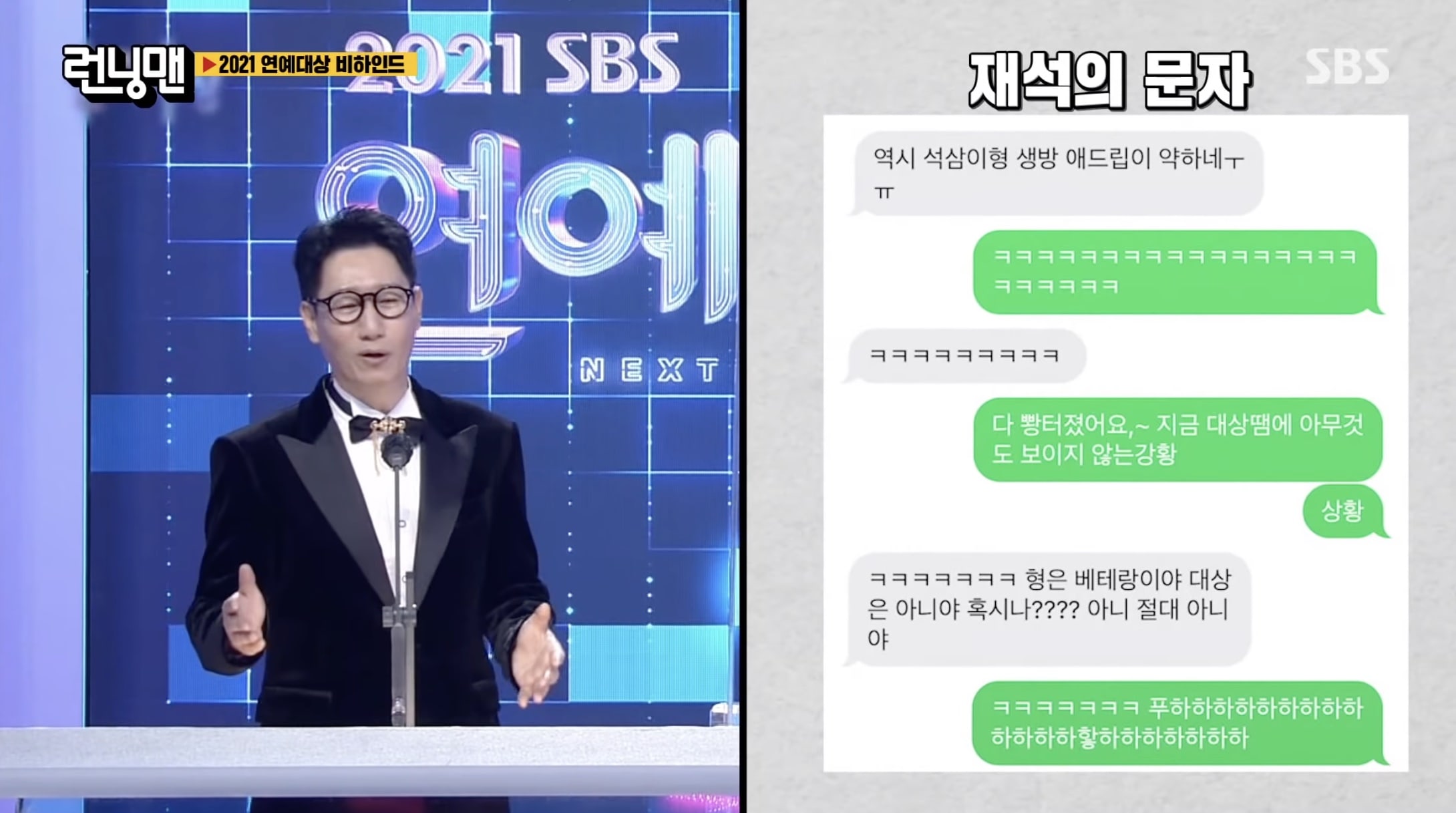 Although Ji Suk Jin did not end up winning the Daesang at the 2021 SBS Entertainment Awards, the production staff of “Running Man” shared a brief clip after his performance with Shin Hyo Bum saying that he had won the Daesang in their hearts. The clip also included the moment that Yang Se Chan won the Top Excellence Award.

… and the 2021 SBS Entertainment Awards here!