Gaon has released its weekly chart rankings for the week of January 9 to January 15. 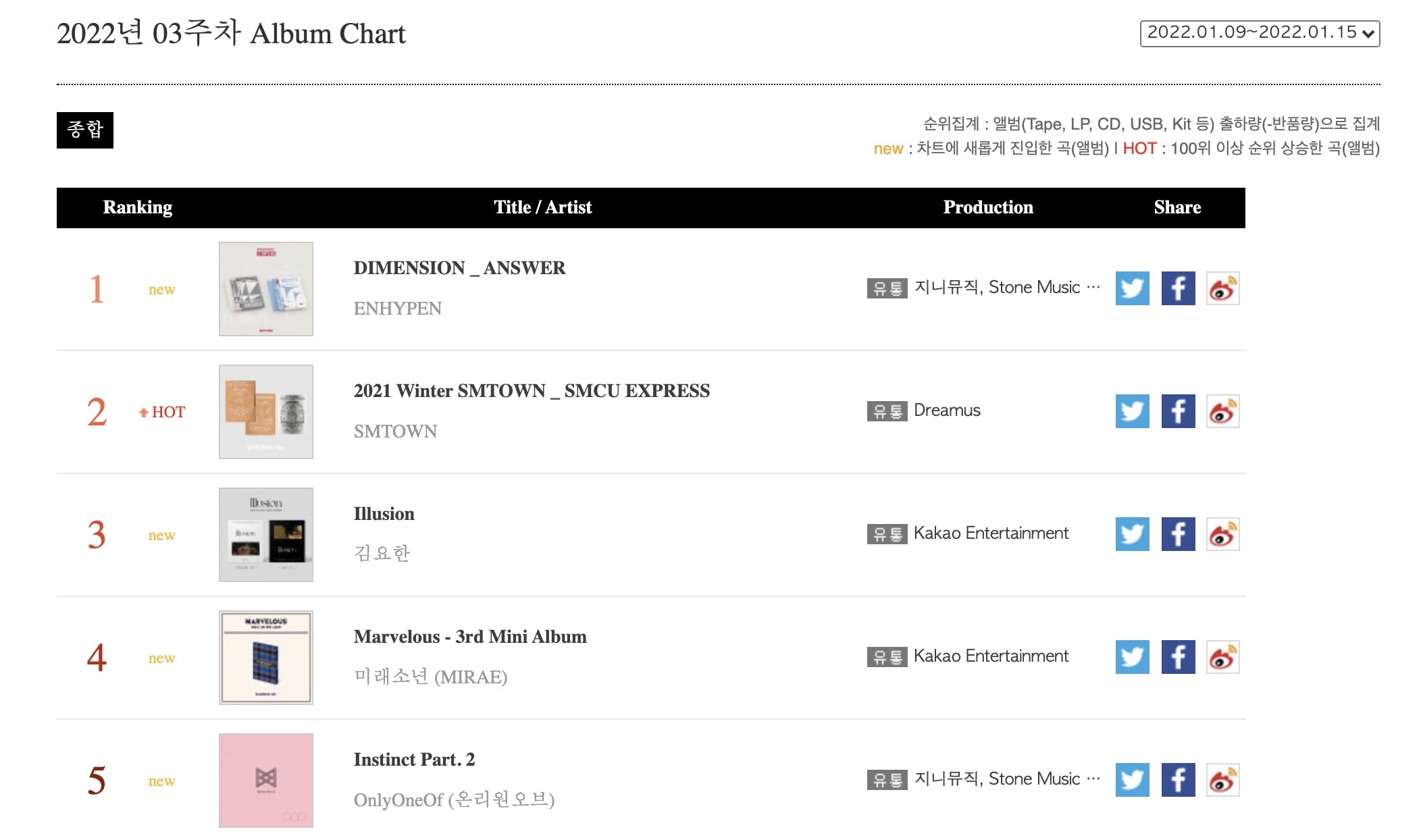 ENHYPEN’s new repackaged album “DIMENSION : ANSWER” topped the album chart for the week of January 9 to 15. With the exception of the “2021 Winter SMTOWN : SMCU EXPRESS” special album, which shot back up the chart this week to take the No. 2 spot, all the top five entries are new. WEi’s Kim Yo Han’s mini album “Illusion” placed third, followed by MIRAE’s “Marvelous” at No. 4 and OnlyOneOf’s “Instinct Part. 2” at No. 5. 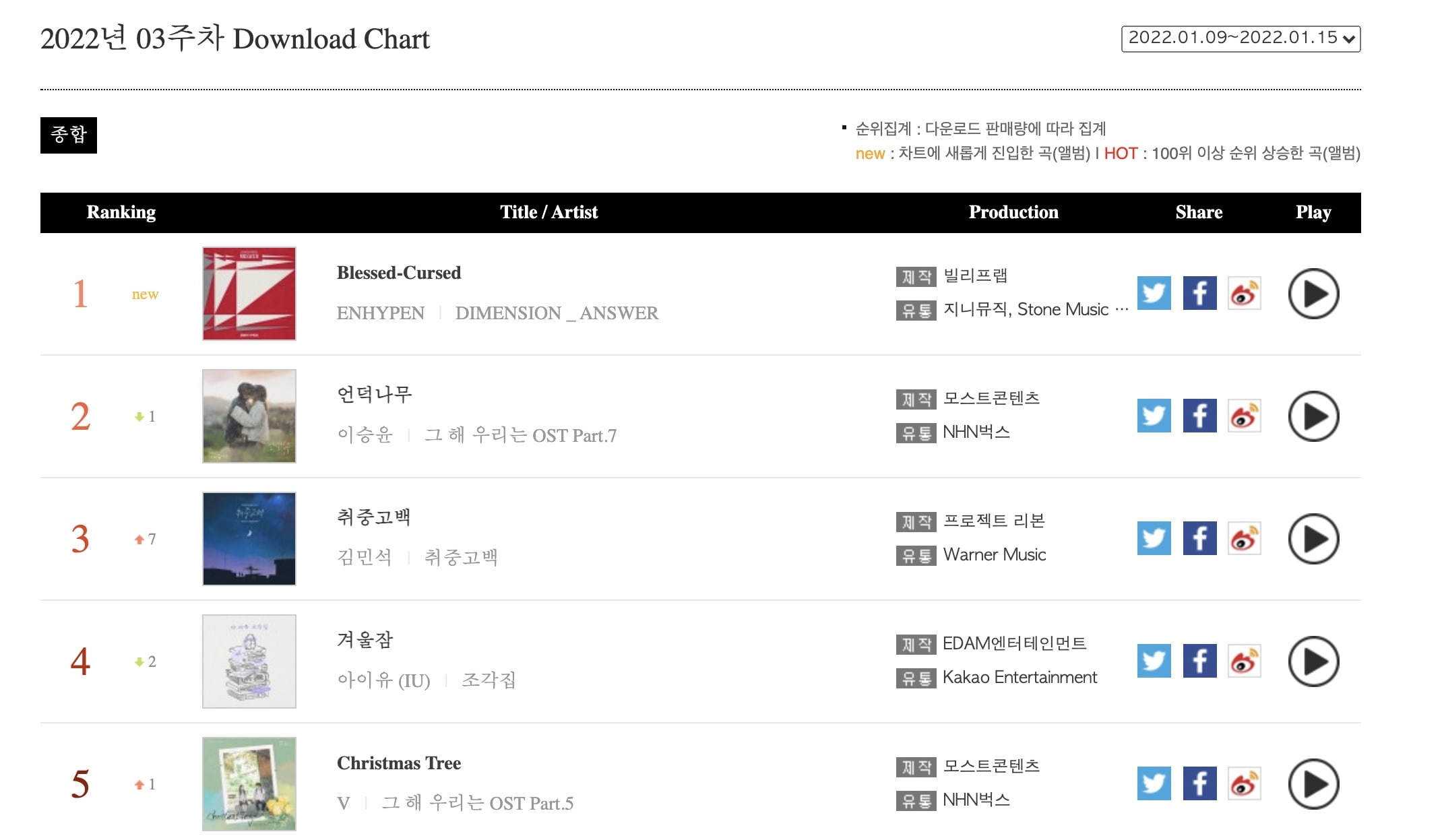 ENHYPEN also topped the download chart for January 9 to 15 with “Blessed-Cursed,” the title track off “DIMENSION : ANSWER.” Lee Seung Yoon’s “The Giving Tree” dropped down to second and was the first of two OSTs from the drama “Our Beloved Summer” to place in the top five this week, with BTS’s V’s “Christmas Tree” rising to No. 5. MeloMance’s Kim Min Seok’s “Drunken Confession,” a remake of Feel’s 2005 song, placed No. 3, followed by IU’s “Winter Sleep” at No. 4. 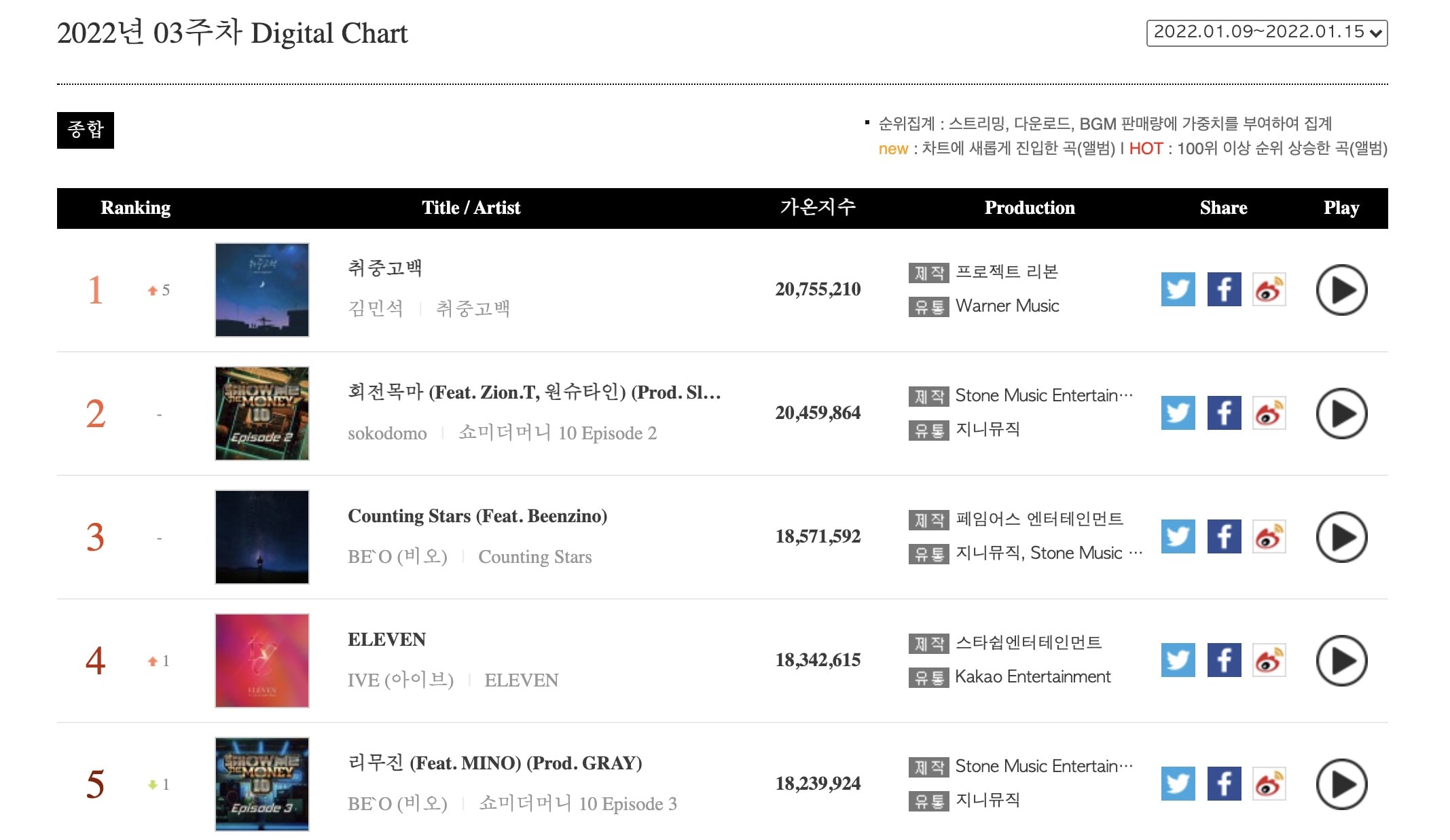 Kim Min Seok’s “Drunken Confession” has been topping the realtime charts for the past week and took the No. 1 spot on the digital chart. sokodomo’s “Merry-Go-Round” was the first of two “Show Me the Money 10” tracks remaining in the top five, with BE’O’s “Limousine” at No. 5. BE’O also had his new single, “Counting Stars,” hold on to its spot at No. 3. IVE’s “ELEVEN” rounded out the list at No. 4. 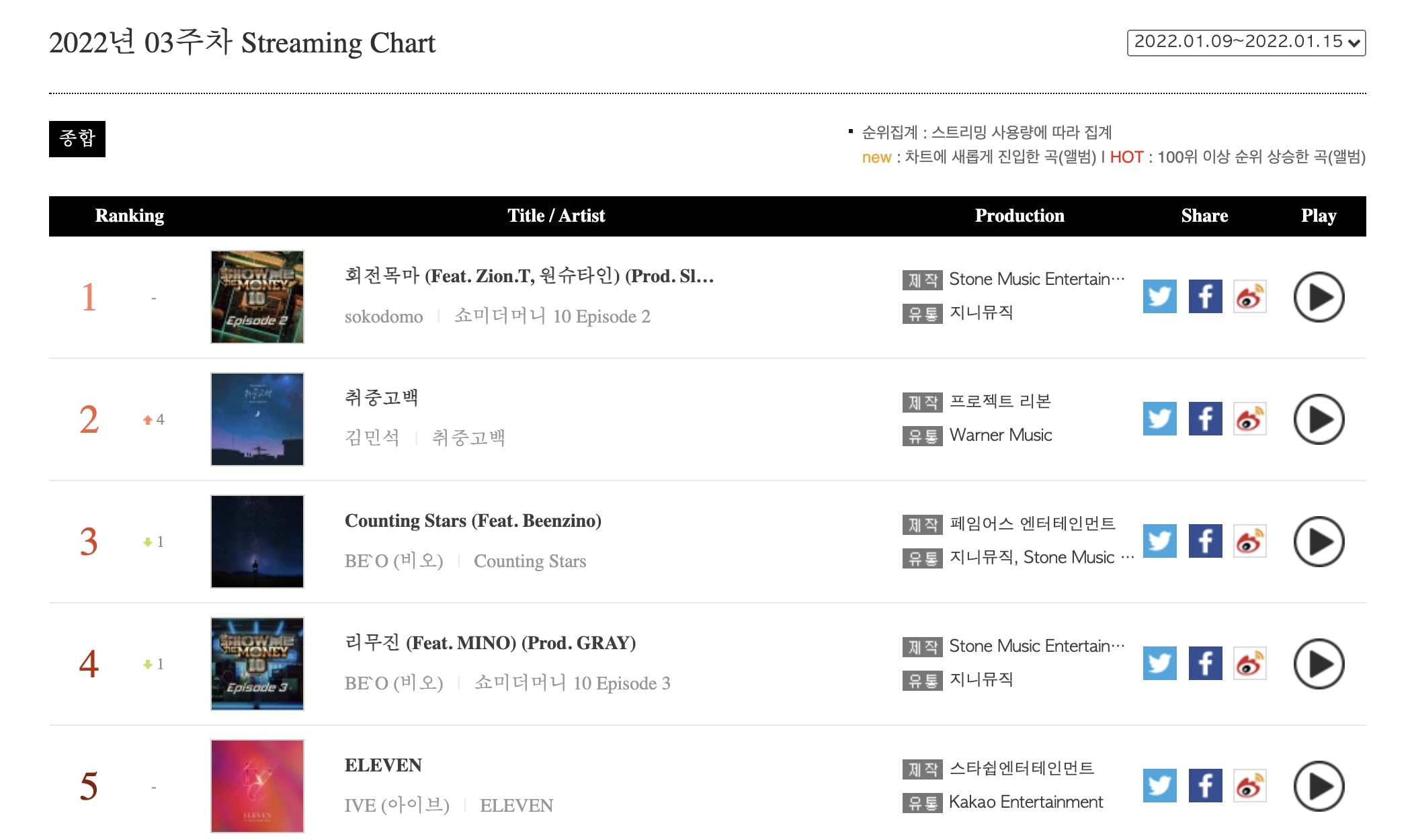 The streaming chart for the week of January 9 to 15 has the same songs as the digital chart, albeit in a different order. sokodomo’s “Merry-Go-Round” held on to the No. 1 spot on this chart, with “Drunken Confession” coming in at No. 2. BE’O’s “Counting Stars” and “Limousine” dropped to No. 3 and No. 4 respectively, while IVE’s “ELEVEN” maintained its position at No. 5. 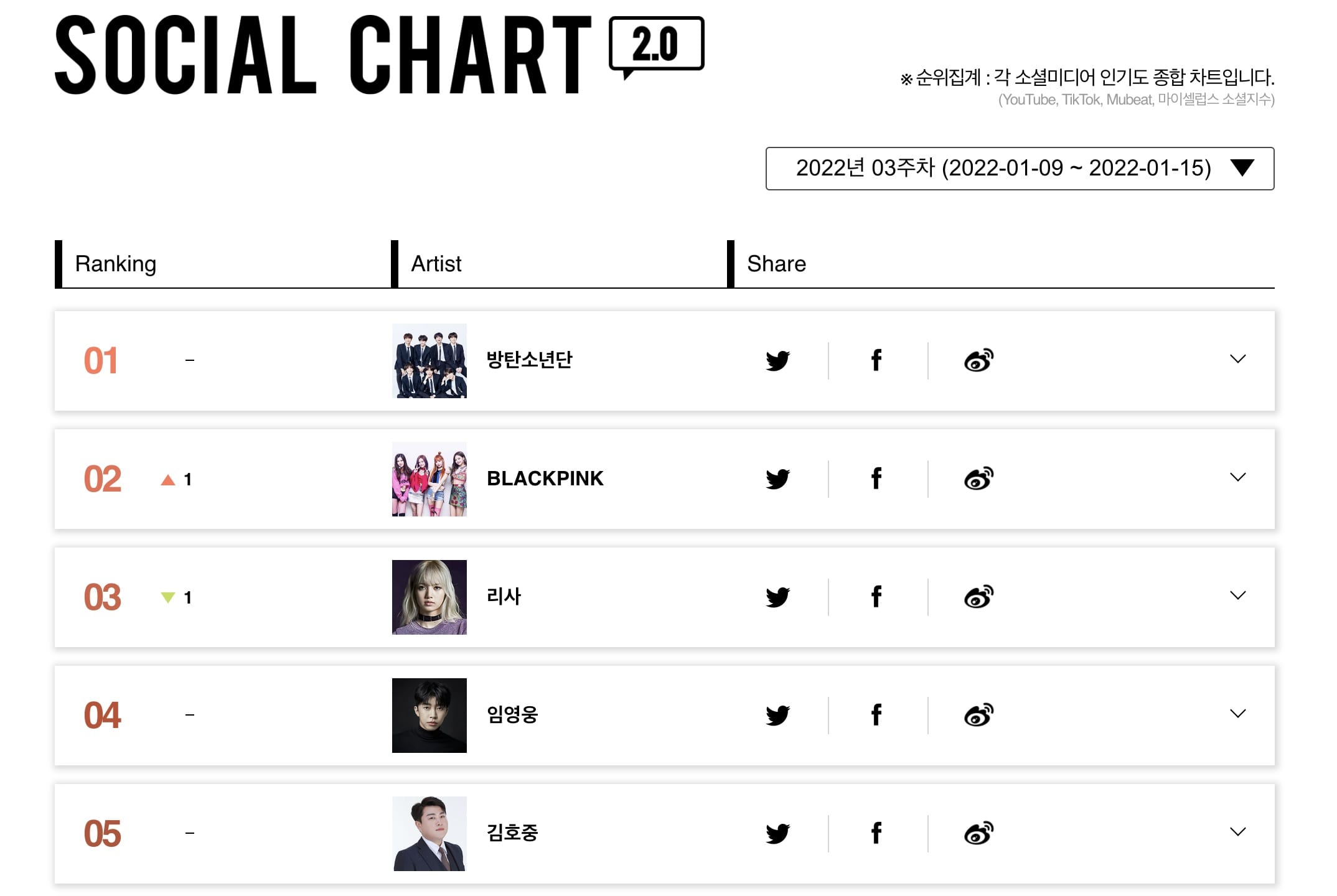 Gaon’s social chart featured a change in the top three for the first time in several weeks, with BLACKPINK rising again to overtake BLACKPINK’s Lisa at No. 2. BTS held on to their top spot as usual, followed by trot singers Lim Young Woong and Kim Ho Joong at No. 4 and No. 5.