Due to the ongoing wildfire that began on the eastern coast of Korea earlier this month, various celebrities have made thoughtful donations to aid victims.

On Friday, March 4, a large wildfire began on the eastern coast of Korea on a mountain near the seaside town of Uljin in North Gyeongsang Province. It spread to the nearby city of Samcheok in Gangwon Province and has continued to spread to other eastern coastal cities like Donghae and Gangneung.

On March 5, Park Bo Young made a donation of 50 million won (approximately $40,527) to the Hope Bridge Association of the National Disaster Relief. The donation will go towards creating temporary housing for victims and emergency reliefs kits, as well as the firefighters who have been working tirelessly in harsh environments.

On March 6, the Hope Bridge Association of the National Disaster Relief announced that actor Lee Je Hoon had made a 100 million won (approximately $81,000) donation for emergency relief for wildfire victims.

The actor shared, “I hope that enough necessary relief supplies are quickly provided to victims and firefighters who are working at the site of the wildfire. I also hope that the extinguishing of the wildfire and damage recovery can happen as soon as possible.”

Song Hye Kyo made a donation of 100 million won through the Republic of Korea National Red Cross. Through the organization, the actress commented, “I hope that the victims who lost their homes due to the wildfire will quickly be able to return to their everyday lives. I hope this donation will help many people including victims and on-site emergency relief workers.”

To the Community Chest of Korea, Jun Hyun Moo donated 100 million won to support emergency relief for victims. His contribution will cover expenses related to wildfire recovery and victim support. Jun Hyun Moo shared, “I am very worried for the wildfire victims who have lost their homes and are enduring difficult times. I hope for the fire to be extinguished quickly and I hope [this donation] gives at least a bit of help to citizens of the affected areas and firefighters.”

Kim Sejeong, Yoon Jung Hee, and Yoon Se Ah also made donations through the Hope Bridge Association of the National Disaster Relief. Kim Sejeong’s donation of 10 million won (approximately $8,100) will be used for relief goods and disaster recovery in affected cities, and will also support the housing and livelihood of victims.

Yoon Jung Hee donated 50 million won and shared, “I have conveyed my desire to help citizens of areas that have been affected by the wildfire.”

Yoon Se Ah contributed 10 million won and commented through her Instagram, “I sincerely hope a tragedy like this is not repeated.”

On March 8, Jay Park also took to Instagram to share his donation certificate. The certificate shows his donation of 50 million won to the Hope Bridge Association of the National Disaster Relief. He tagged rapper Woo Won Jae, thanking him for inspiring his donation and added the caption, “Let’s live peacefully while helping each other. Please.” 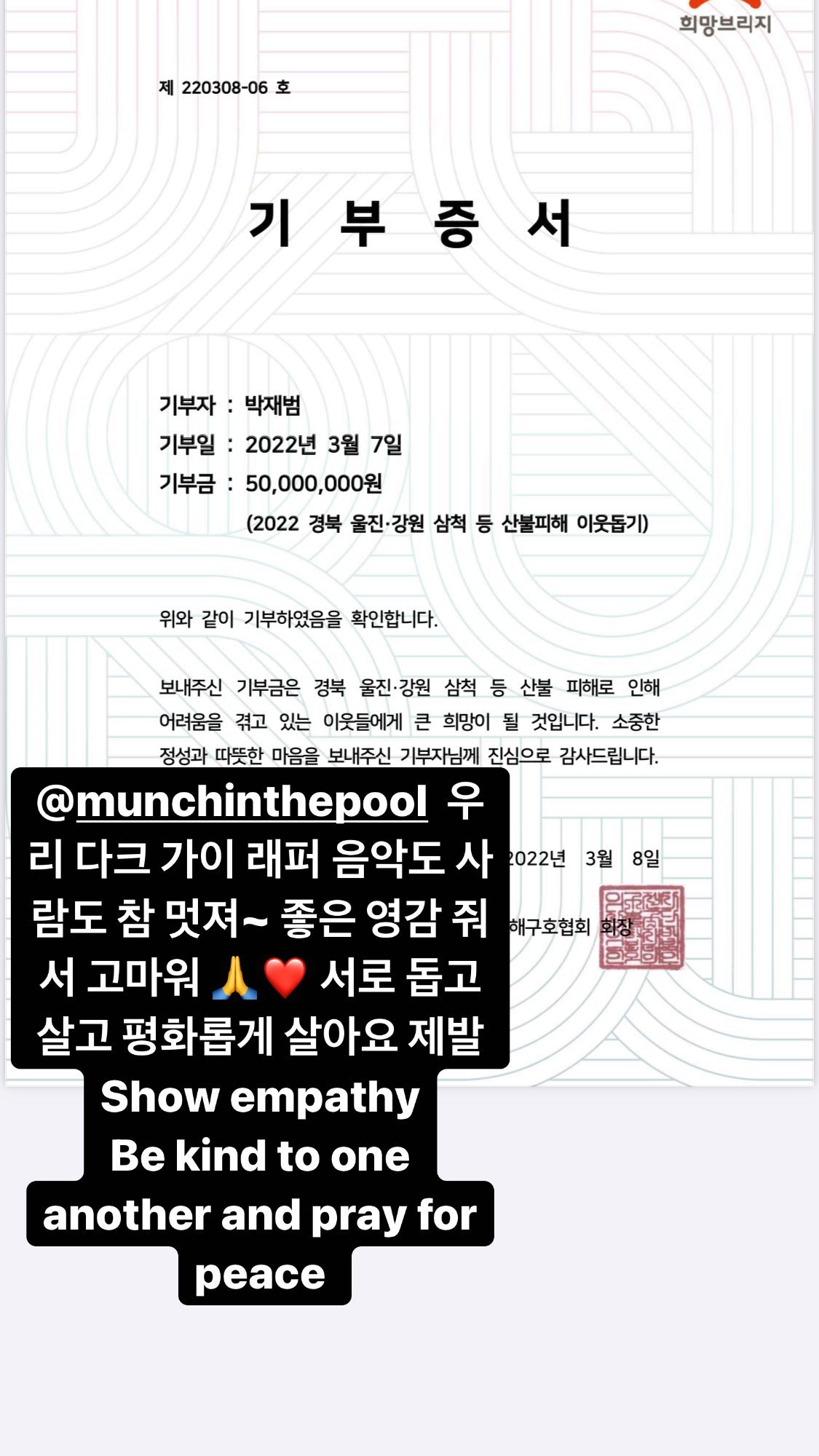 On the same day, the Hope Bridge Association of the National Disaster Relief announced that they had received donations of 100 million won and 50 million won from actors Kim Woo Bin and Kim Dong Wook. On top of providing emergency relief goods, these donations will go towards covering expenses of various items needed by victims.

The organization also shared that newly engaged couple Hyun Bin and Son Ye Jin had made a joint donation of 200 million won (approximately $162,110). This donation will also cover expenses of emergency relief goods and other items that victims need.

NCT’s Doyoung also contributed 30 million won (approximately $24,310) to the Hope Bridge Association of the National Disaster Relief for recovery in cities designated as special disaster zones and to support victims.

Doyoung commented, “I have donated out of hopes that those who have lost their homes due to the wildfire can return to their everyday lives as soon as possible. Thank you to everyone who is doing their best to extinguish this wildfire and I hope this [donation] becomes of at least a bit of help to victims.”

Watch Park Bo Young in “Doom at Your Service” below: