TREASURE topped the physical album chart for the month of February with their latest mini album “THE SECOND STEP : CHAPTER ONE,” which debuted at No. 1.

STAYC’s new mini album “YOUNG-LUV.COM” entered the monthly chart at No. 2, NMIXX’s debut single album “AD MARE” at No. 3, Girls’ Generation’s Taeyeon’s third solo album “INVU” at No. 4, and BTOB’s new studio album “Be Together” at No. 5. 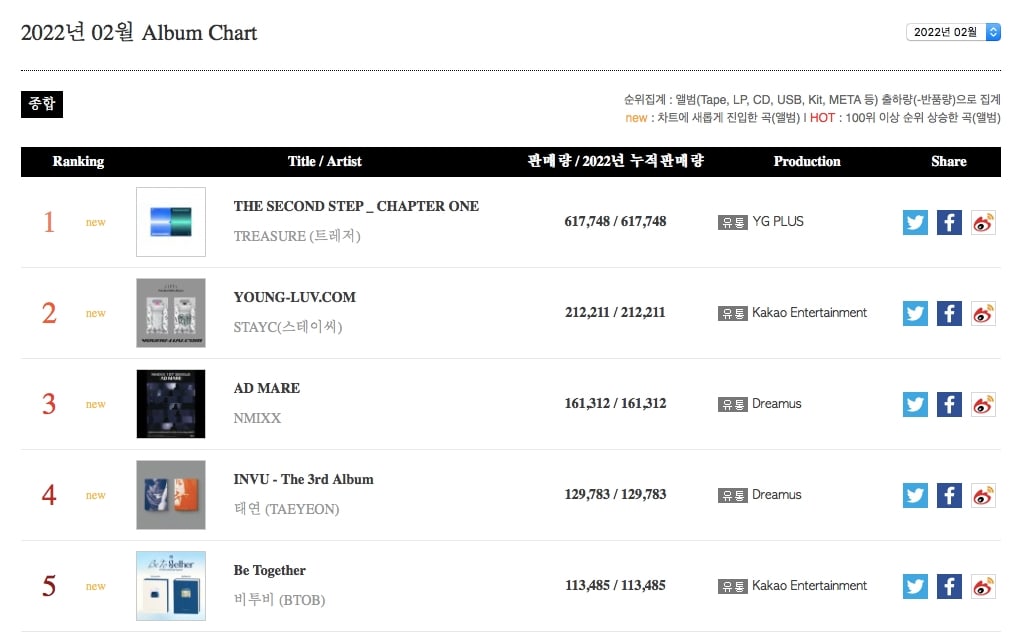 Super Junior’s new special single album “The Road : Winter for Spring” debuted at No. 1 on the physical album chart for the week of February 27 to March 5.

TEMPEST’s debut mini album “It’s ME, It’s WE” entered the weekly album chart at No. 2, while TREASURE’s “THE SECOND STEP : CHAPTER ONE” and NMIXX’s “AD MARE” stayed strong at No. 3 and No. 4 respectively.

Finally, SM Entertainment’s agency-wide winter album “2021 Winter SMTOWN: SMCU EXPRESS” climbed back up to No. 5 on this week’s chart. 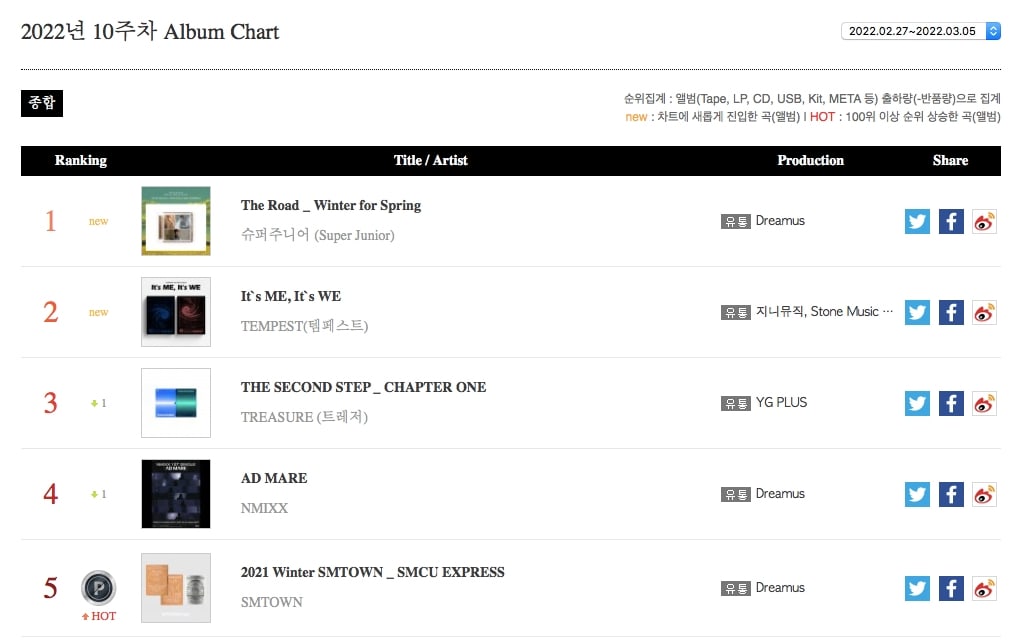 Taeyeon topped the digital download chart for February with her hit title track “INVU,” while her pre-release track “Can’t Control Myself” charted at No. 5 for the month.

TREASURE’s new title track “JIKJIN” debuted at No. 2 on the monthly chart, with NCT’s Mark’s solo single “Child” entering the chart at No. 3 and BTOB’s title track “The Song” following at No. 4. 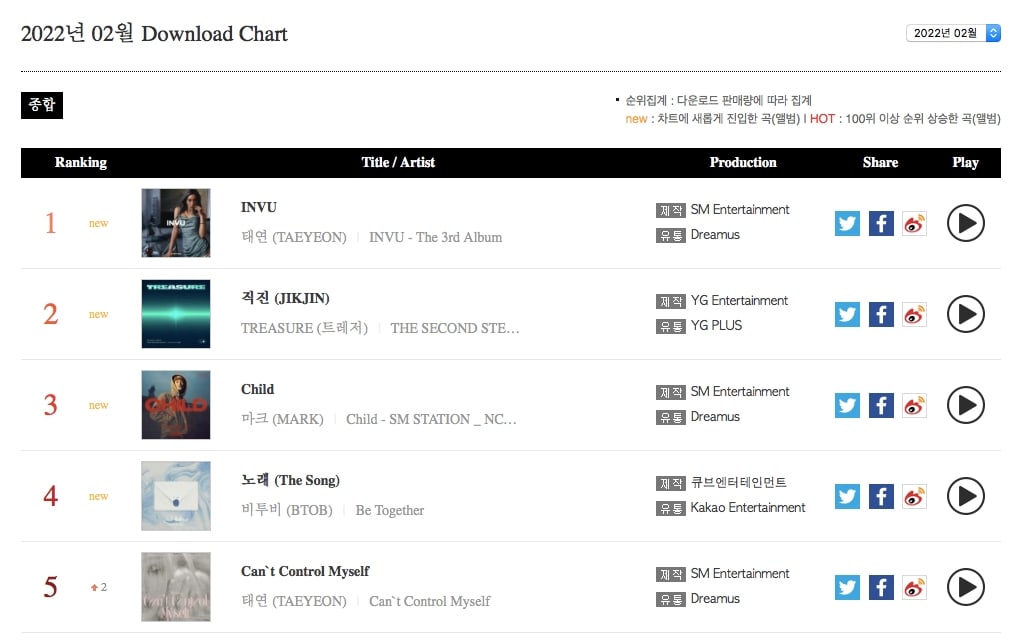 “How Do You Play?” project group MSG Wannabe (M.O.M)’s new song “Do you want to hear” shot all the way up to No. 1 on this week’s digital download chart.

Finally, TREASURE’s “JIKJIN” rounded out the top five for the week. 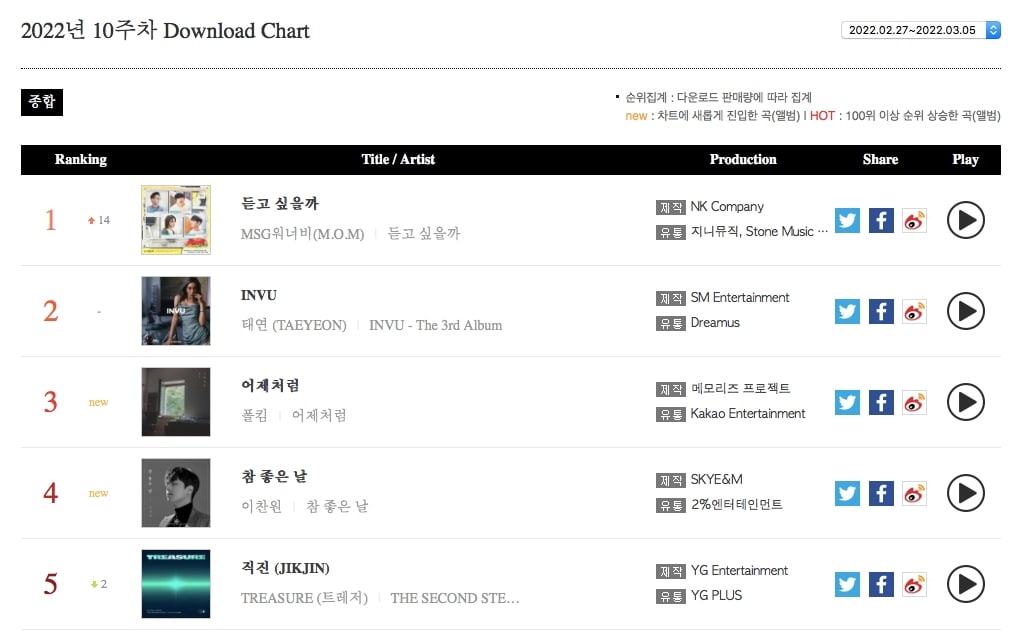 MeloMance’s Kim Min Seok’s “Drunken Confession” held onto its spot at No. 1 on the overall digital chart for the second consecutive month.

IVE’s debut track “ELEVEN” rose to No. 2 on the monthly chart, followed by Lim Young Woong’s “Love Always Runs Away” at No. 3 and sokodomo’s “Merry-Go-Round” (featuring Zion.T and Wonstein and produced by Slom) at No. 4.

Finally, SM Entertainment’s project girl group GOT the beat’s “Step Back” climbed to No. 5 for February. 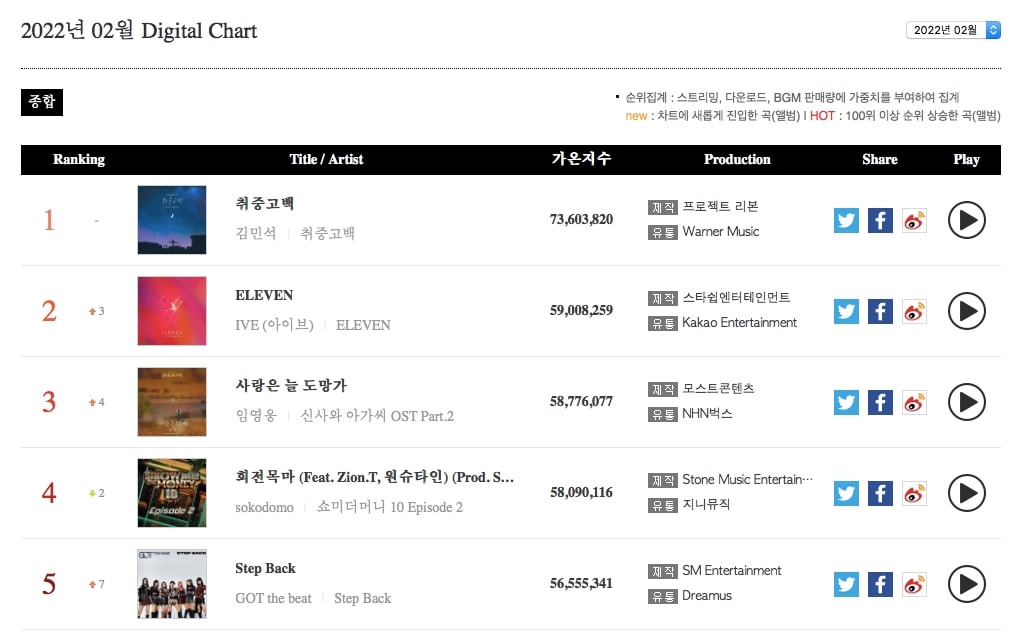 Taeyeon maintained her double crown on the weekly charts, with her hit song “INVU” holding onto its spot at the top of both the overall digital chart and the streaming chart this week.

Meanwhile, Kim Min Seok’s “Drunken Confession” similarly maintained its position at No. 2 on both charts. 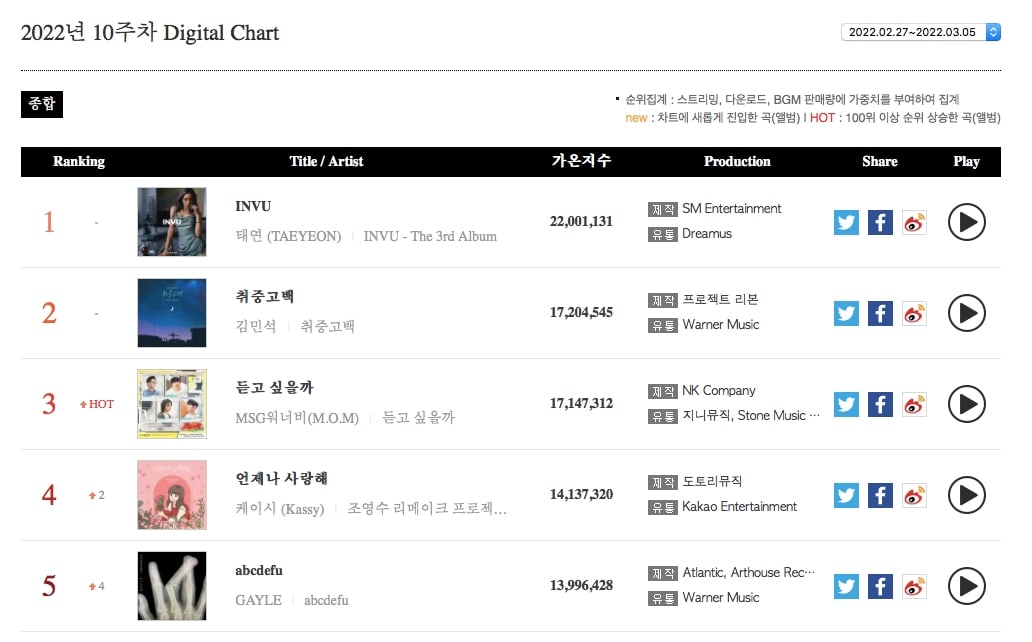 Kim Min Seok’s “Drunken Confession” topped the streaming chart for February, trailed by IVE’s “ELEVEN” at No. 2, sokodomo’s “Merry-Go-Round” at No. 3, Lim Young Woong’s “Love Always Runs Away” at No. 4, and GOT the beat’s “Step Back” at No. 5. 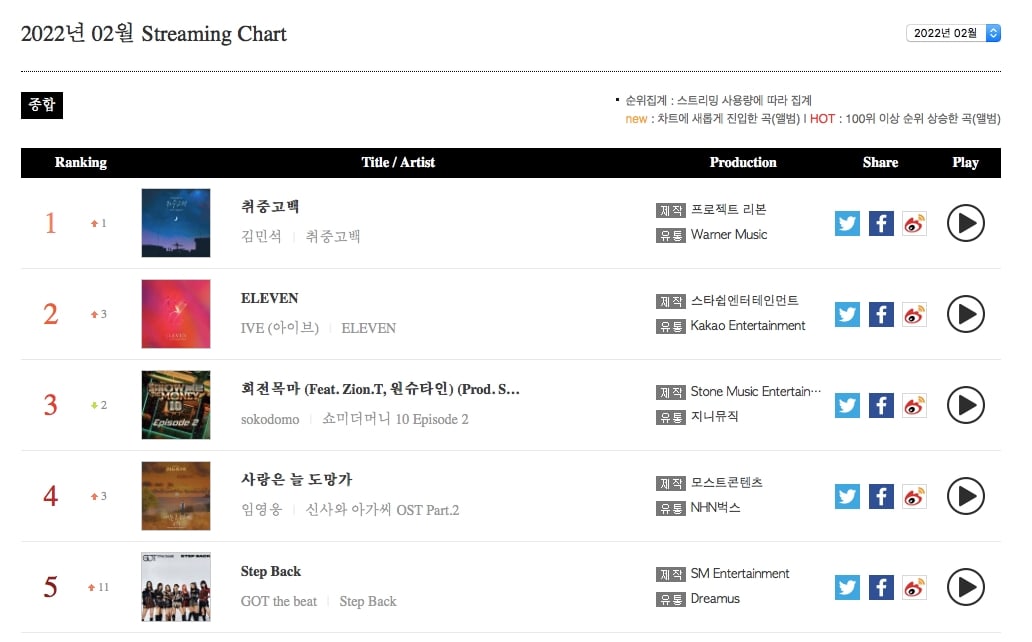 The top four songs on this week’s streaming chart are exactly the same as last week: Taeyeon’s “INVU” came in at No. 1, Kim Min Seok’s “Drunken Confession” at No. 2, IVE’s “ELEVEN” at No. 3, and Lim Young Woong’s “Love Always Runs Away” at No. 4. Finally, GAYLE’s “abcdefu” rounded out the top five for the week. 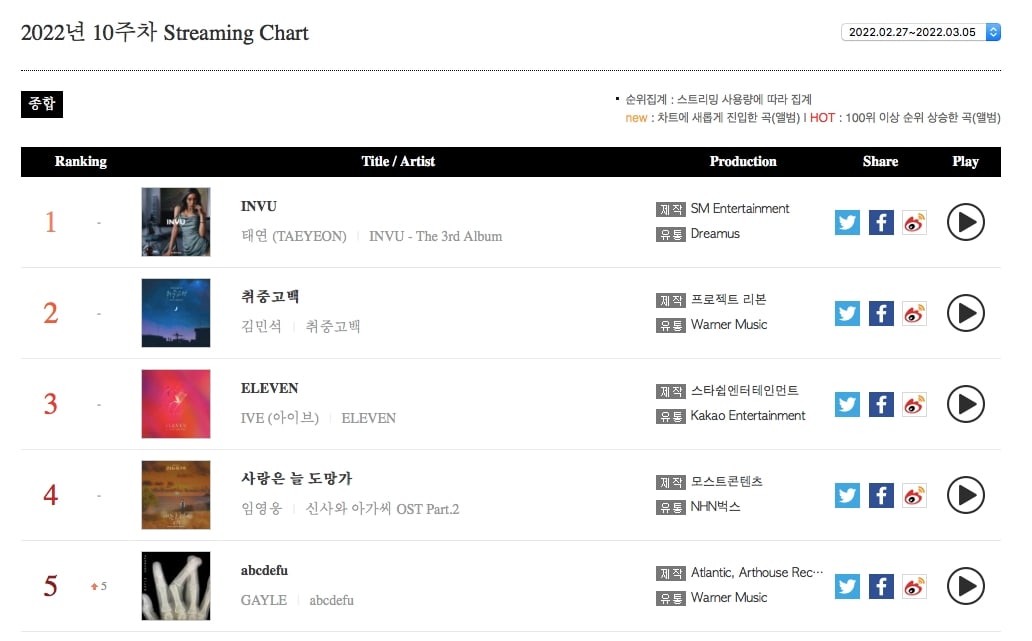 The top five artists on the latest monthly and weekly social charts are exactly the same: BTS held onto their spot at No. 1, followed by BLACKPINK at No. 2, BLACKPINK’s Lisa at No. 3, Lim Young Woong at No. 4, and TWICE at No. 5. 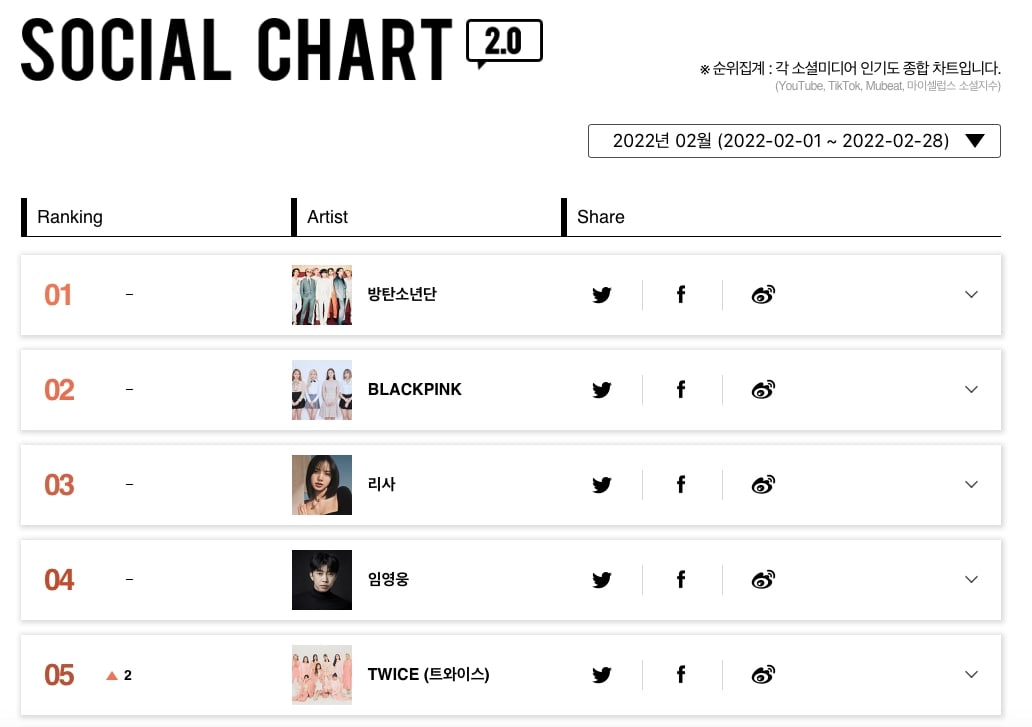 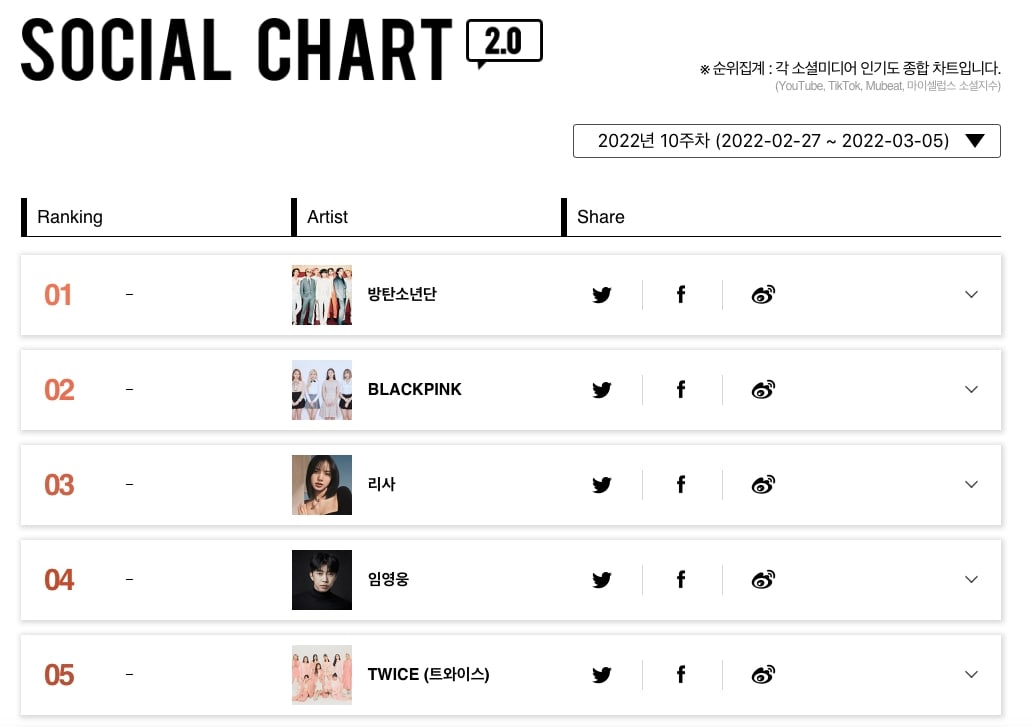