BTS achieved a double crown on the Circle charts for June after topping both the physical album chart and the social chart this month. The group’s anthology album “Proof,” which previously topped the weekly chart for two weeks, debuted at No. 1 on the monthly album chart for June.

Meanwhile, amidst a chart dominated by June releases, NCT DREAM’s repackaged album “Beatbox” stayed strong at No. 2 in its second month.

TWICE’s Nayeon‘s solo debut mini album “IM NAYEON“—which previously debuted at No. 1 on the weekly chart—entered the monthly chart at No. 3, followed by Kep1er’s second mini album “DOUBLAST” at No. 4.

Finally, fromis_9’s new mini album “from our Memento Box” debuted at No. 5 on the chart. 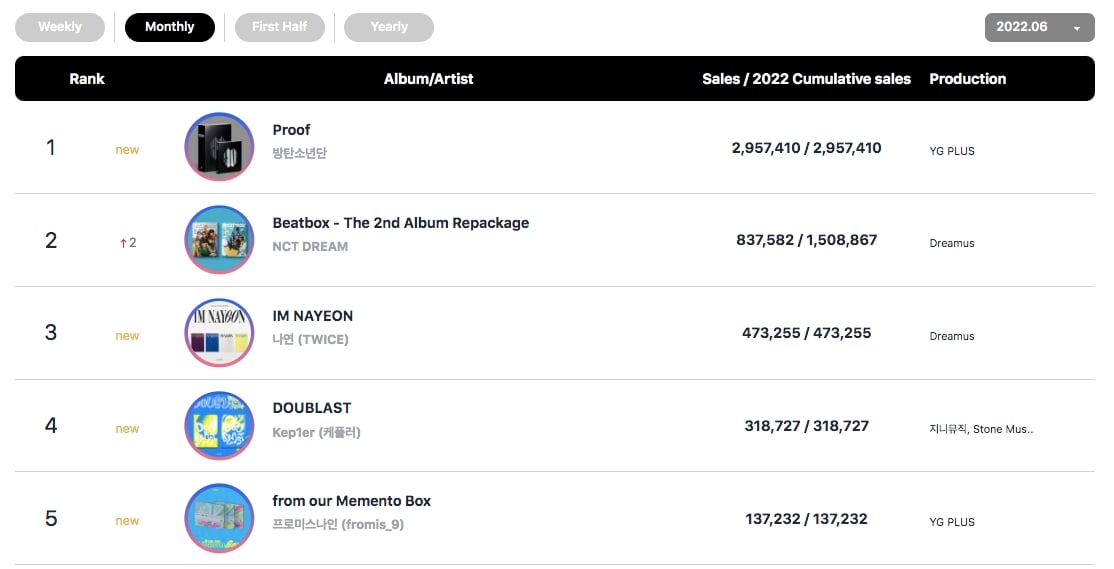 fromis_9 achieved their own double crown on the weekly charts after topping two separate charts for the week of June 26 to July 2. The group’s new mini album “from our Memento Box” debuted at No. 1 on this week’s physical album chart, while their title track “Stay This Way” debuted at No. 1 on the digital download chart. 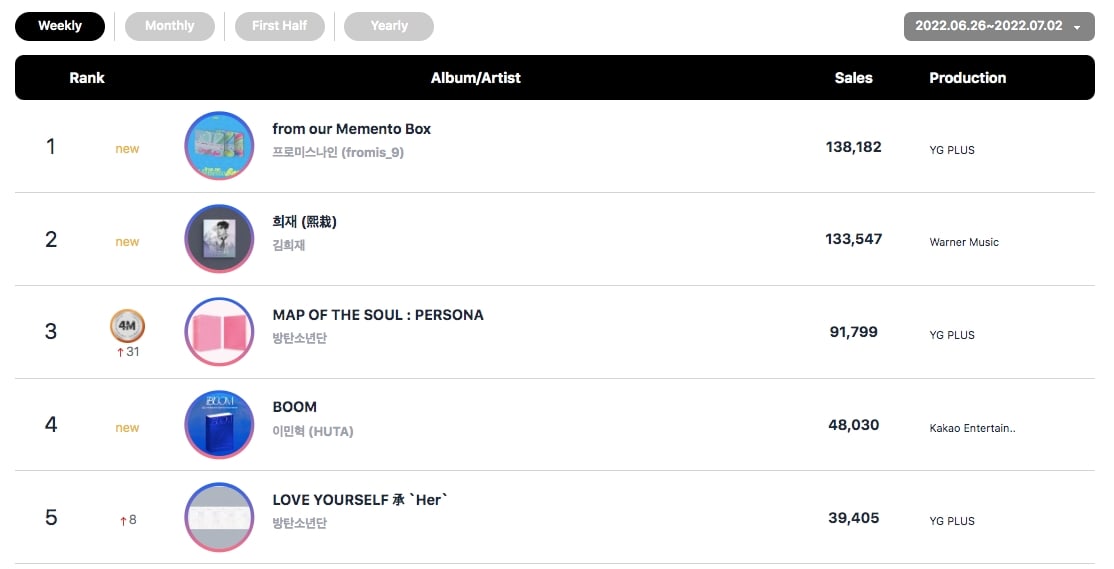 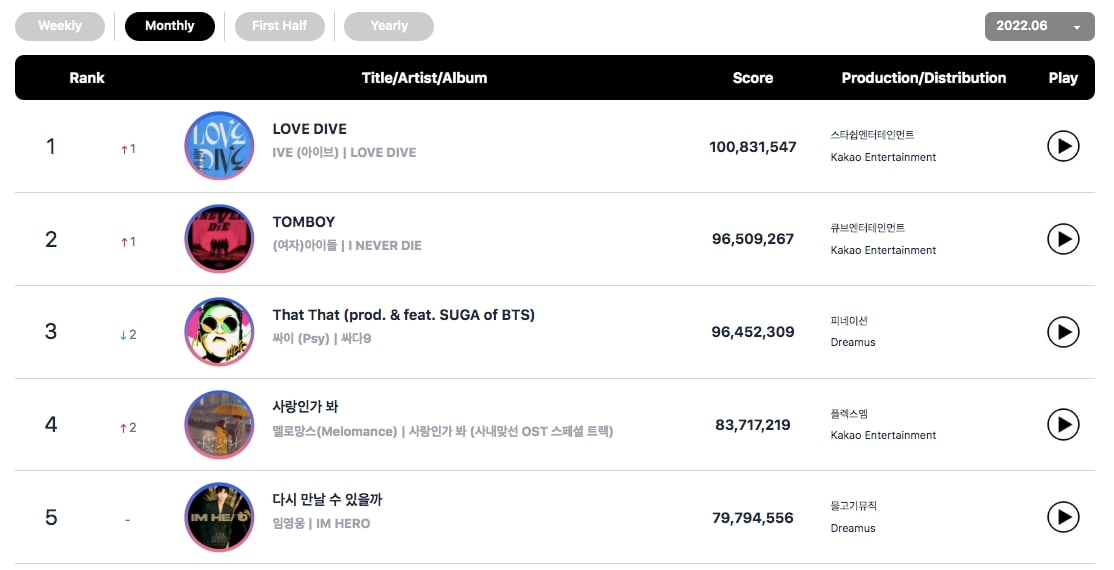 The top five songs on this week’s overall digital chart, this week’s streaming chart, and the streaming chart for June were all exactly the same: IVE’s “LOVE DIVE” reigned at No. 1, followed by (G)I-DLE’s “TOMBOY” at No. 2, PSY’s “That That” (produced by and featuring Suga) at No. 3, MeloMance’s “Love, Maybe” at No. 4, and BIG Naughty’s “Beyond Love” (featuring 10cm) at No. 5. 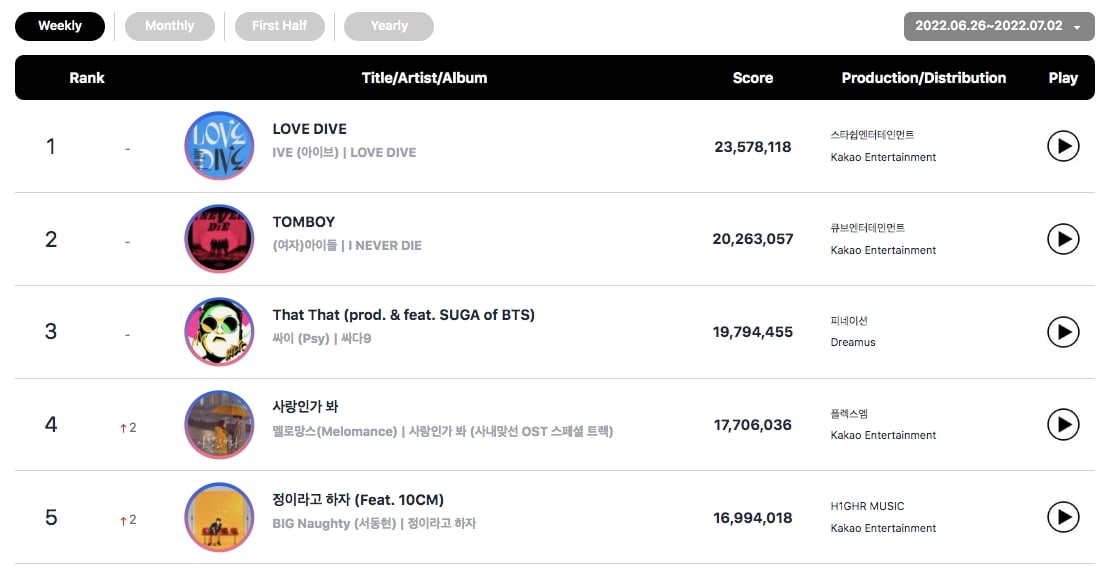 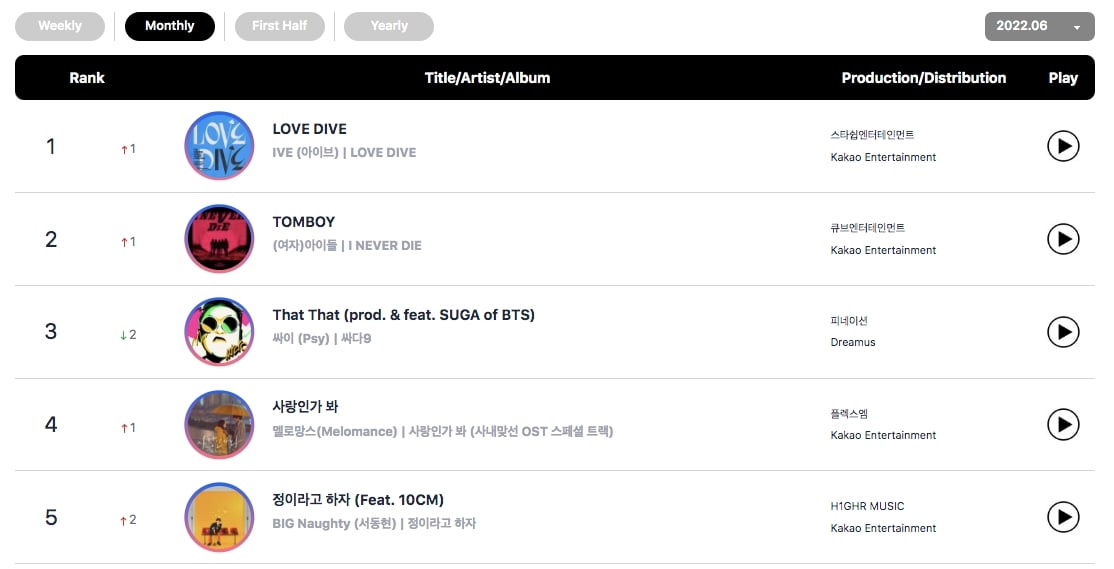 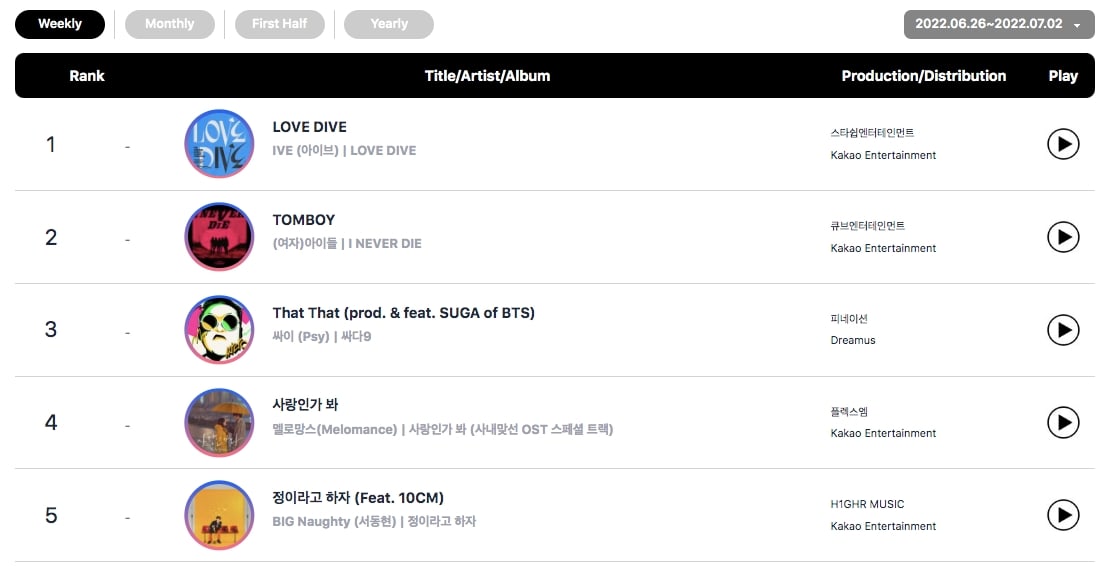 NCT DREAM’s “Beatbox” rose to No. 4 for the month, while Kim Ho Joong’s “Person who shines” rounded out the top five. 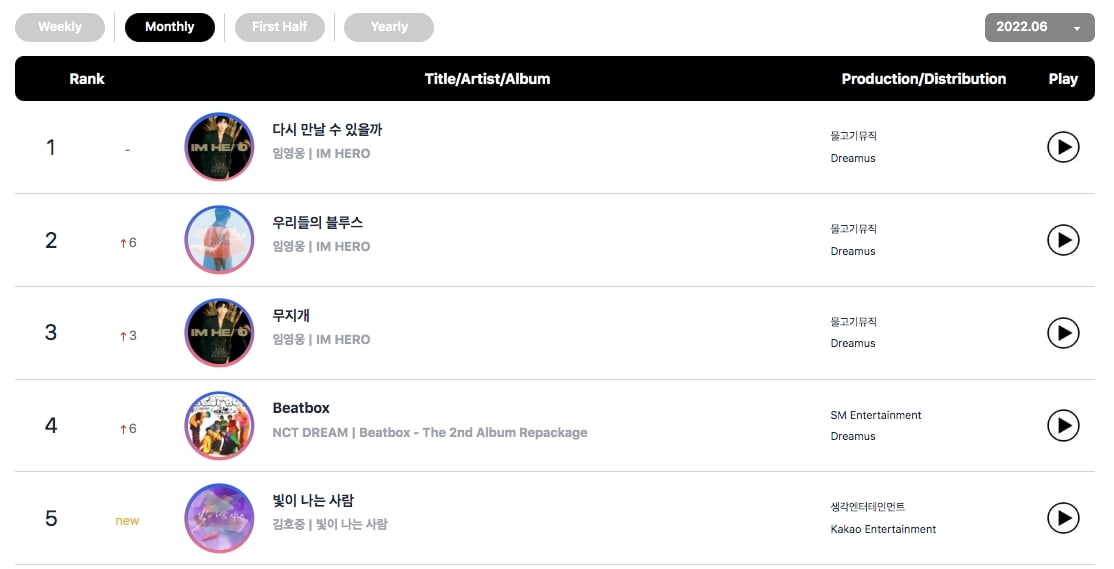 fromis_9’s new title track “Stay This Way” debuted at No. 1 on this week’s digital download chart. 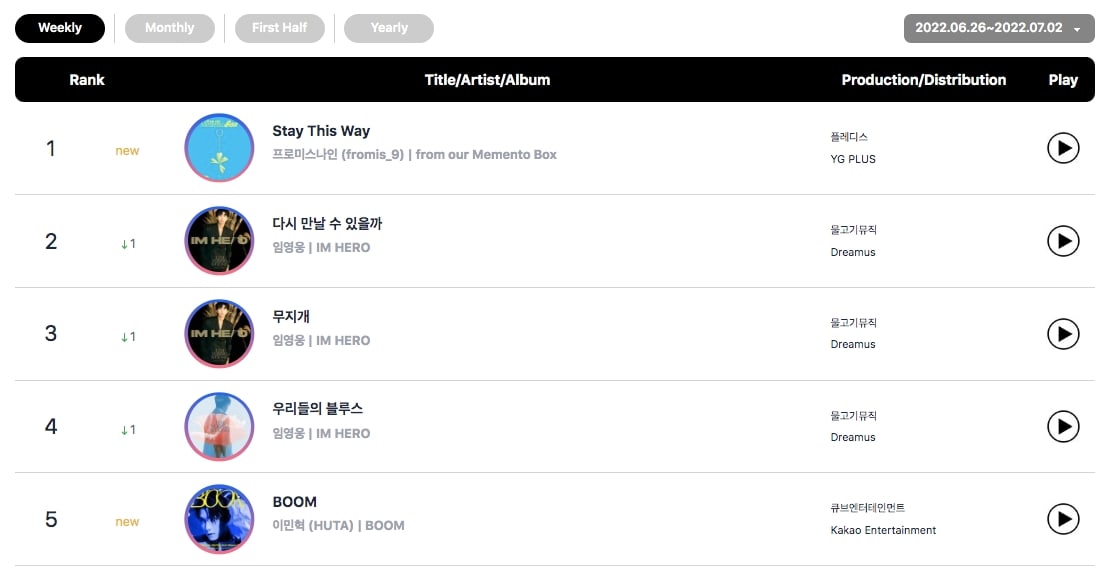 The top five artists on the monthly and weekly social charts were exactly the same: BTS remained No. 1, followed by BLACKPINK at No. 2, Jessi at No. 3, BLACKPINK’s Lisa at No. 4, and Lim Young Woong at No. 5. 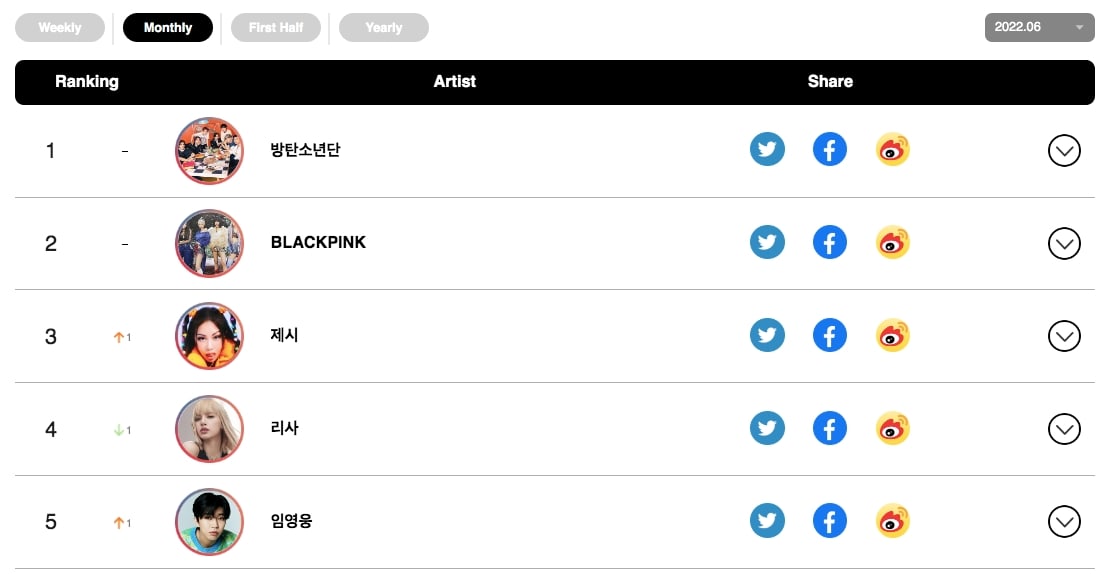 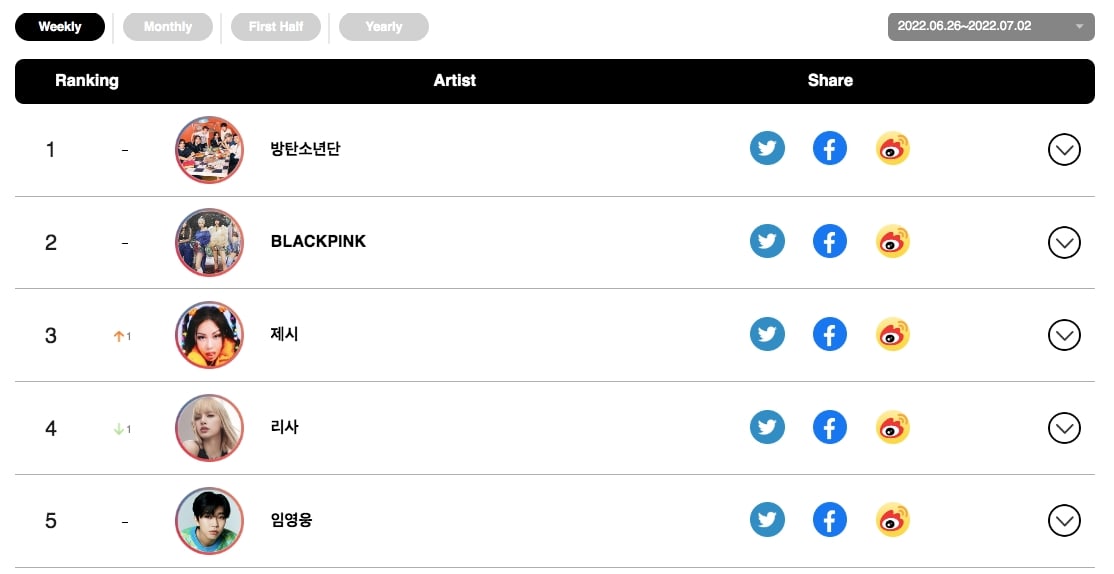