aespa topped the physical album chart for July with their latest mini album “Girls,” which also set a new record for the best-selling girl group album in Circle Chart history after selling 1,645,255 copies in less than a month.

ENHYPEN’s latest mini album “MANIFESTO : DAY 1” entered the monthly chart at No. 2, followed by SEVENTEEN’s repackaged album “SECTOR 17” at No. 3.

ATEEZ’s “THE WORLD EP.1 : MOVEMENT” made an impressive debut at No. 4, despite having been released on July 29—just a few days before the end of the month.

Finally, ITZY’s new mini album “CHECKMATE” debuted at No. 5 on the monthly chart. 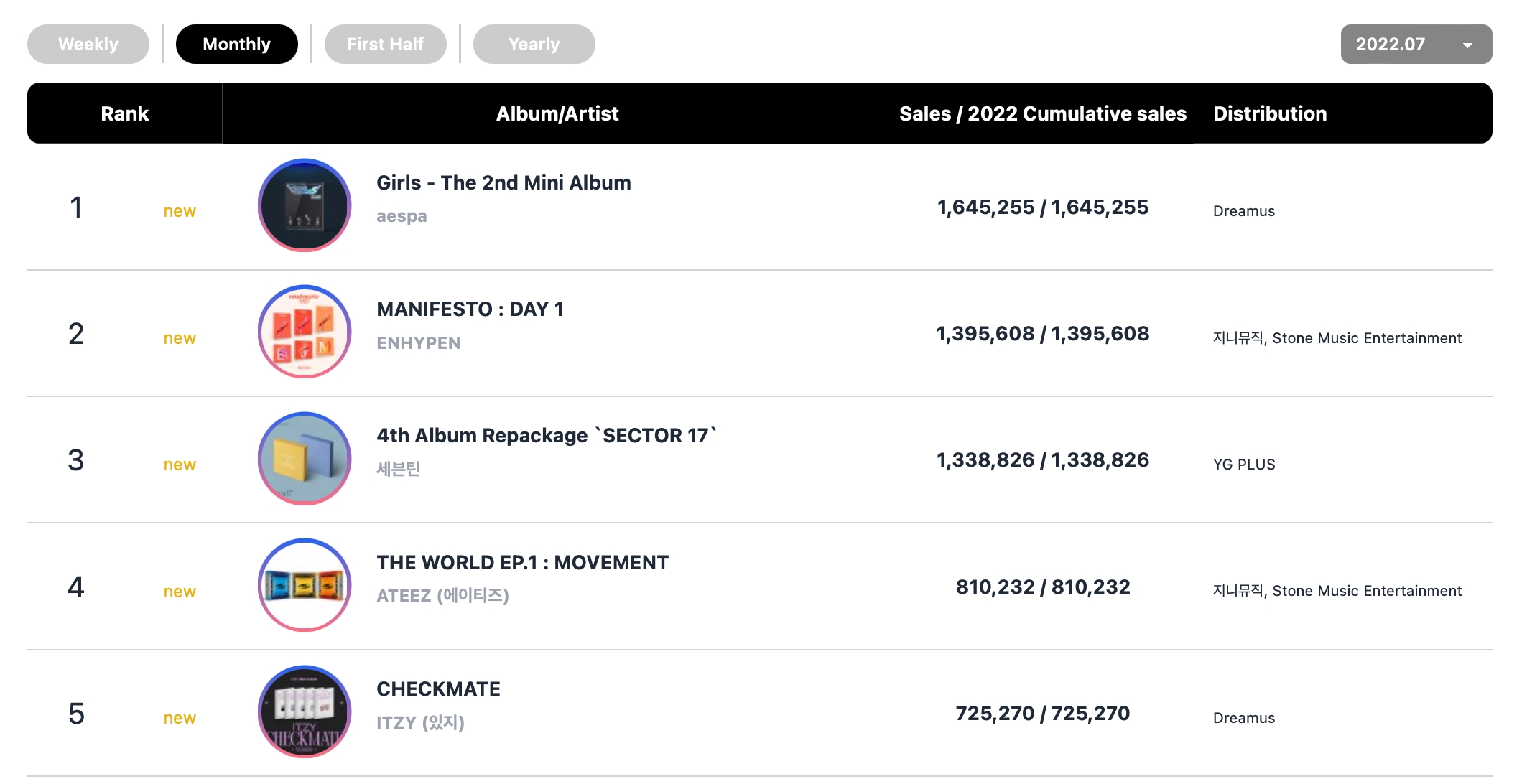 ATEEZ topped the weekly album chart for the second consecutive week with “THE WORLD EP.1 : MOVEMENT,” which debuted at No. 1 last week.

BTS’s anthology album “Proof” shot back up to No. 2 on this week’s chart, while Choi Ye Na’s new mini album “SMARTPHONE” debuted at No. 3.

ITZY’s “CHECKMATE” climbed back up to No. 4 on the chart, and Kim Ho Joong’s “PANORAMA” rounded out the top five for the week. 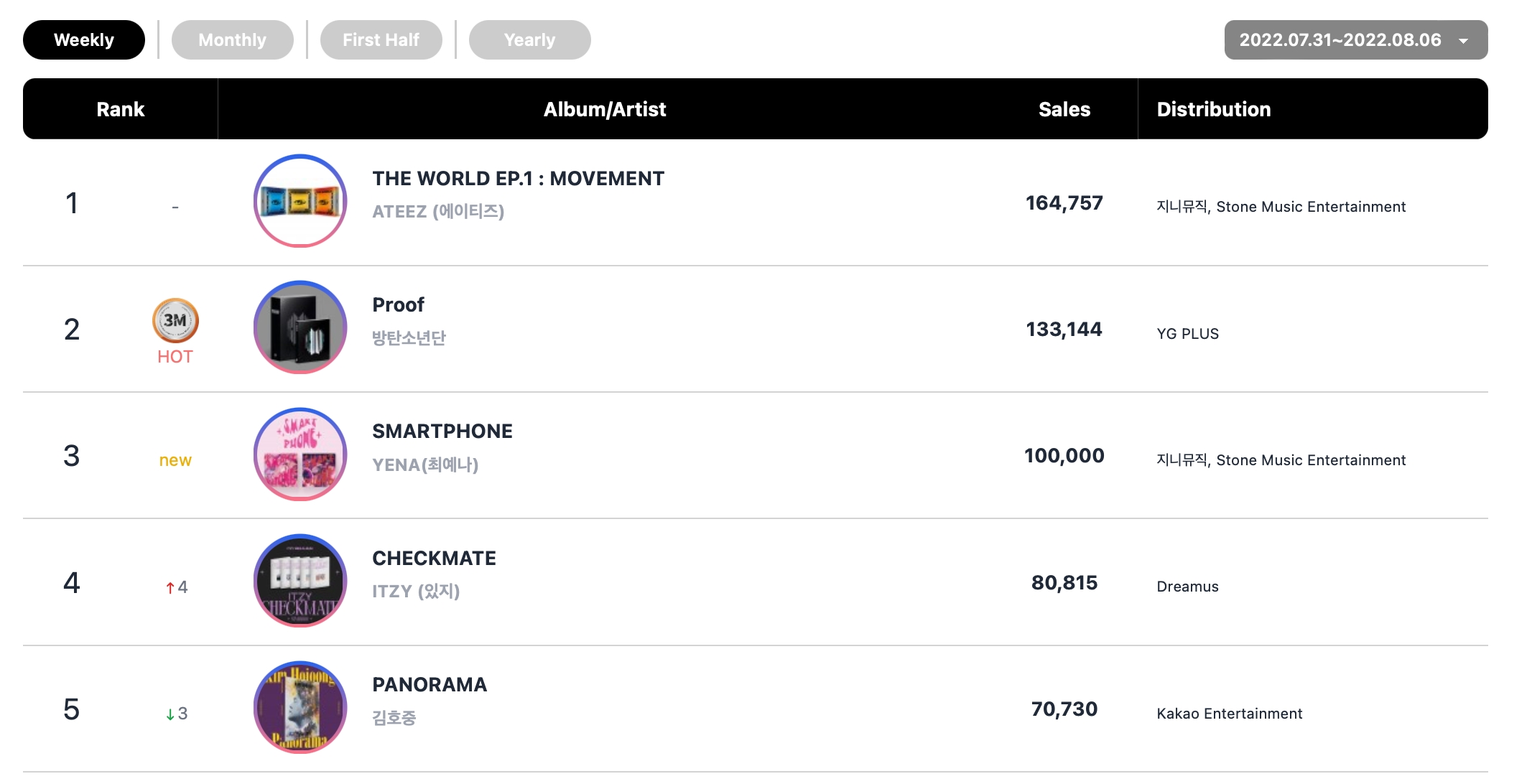 “How Do You Play?” project group WSG Wannabe (Gaya-G) topped the overall digital chart for July with their hit song “At That Moment,” while WSG Wannabe (4FIRE)’s “I Missed You” debuted at No. 2. 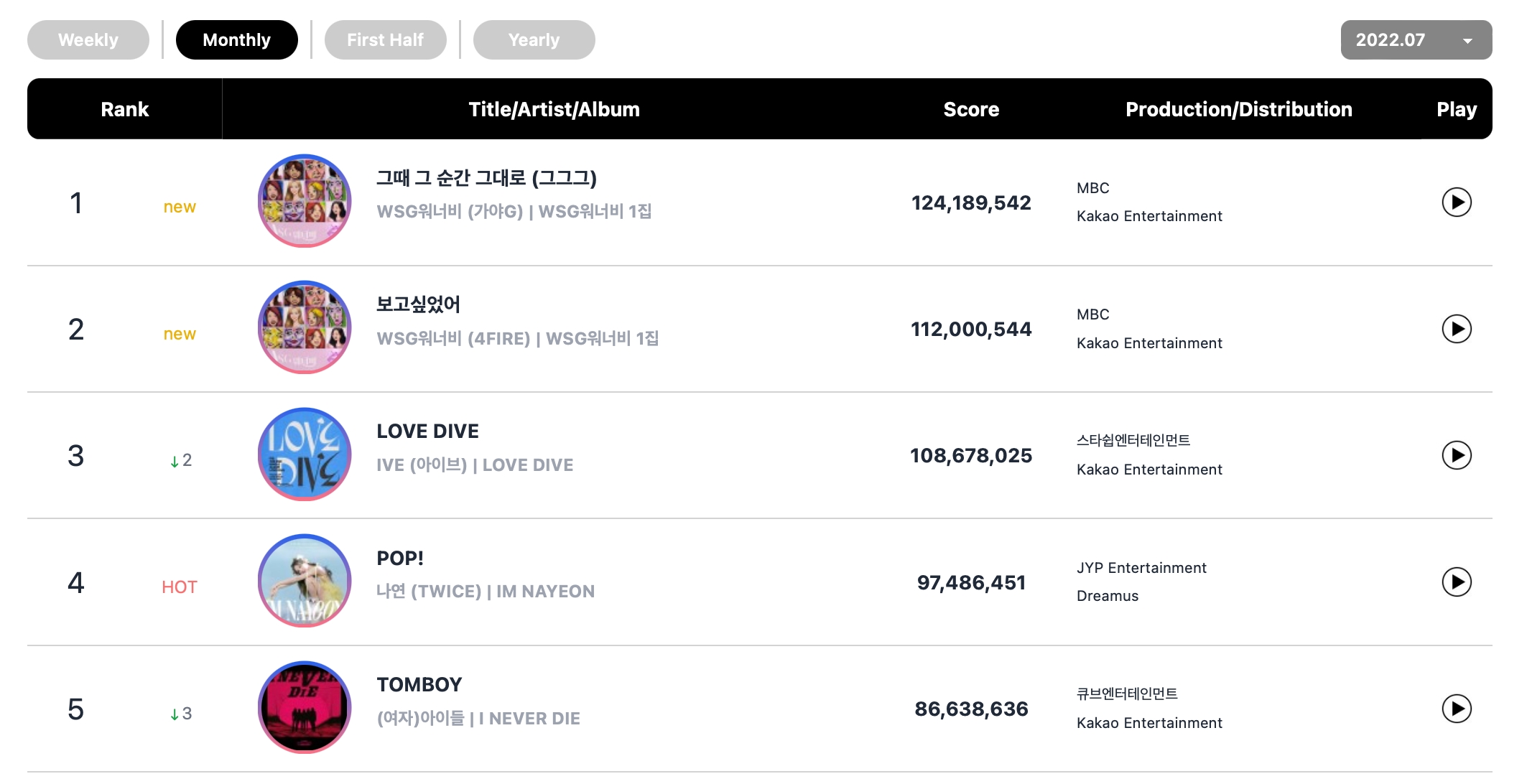 The top five songs on this week’s overall digital chart and streaming chart were exactly the same. WSG Wannabe (Gaya-G) maintained their double crown as their hit song “At That Moment” remained No. 1 on both charts, and WSG Wannabe (4FIRE)’s “I Missed You” similarly held onto its spot at No. 2.

IVE’s “LOVE DIVE” and Nayeon’s “POP!” also maintained their respective positions at No. 3 and No. 4, while ITZY’s “SNEAKERS” climbed up to No. 5 on both charts. 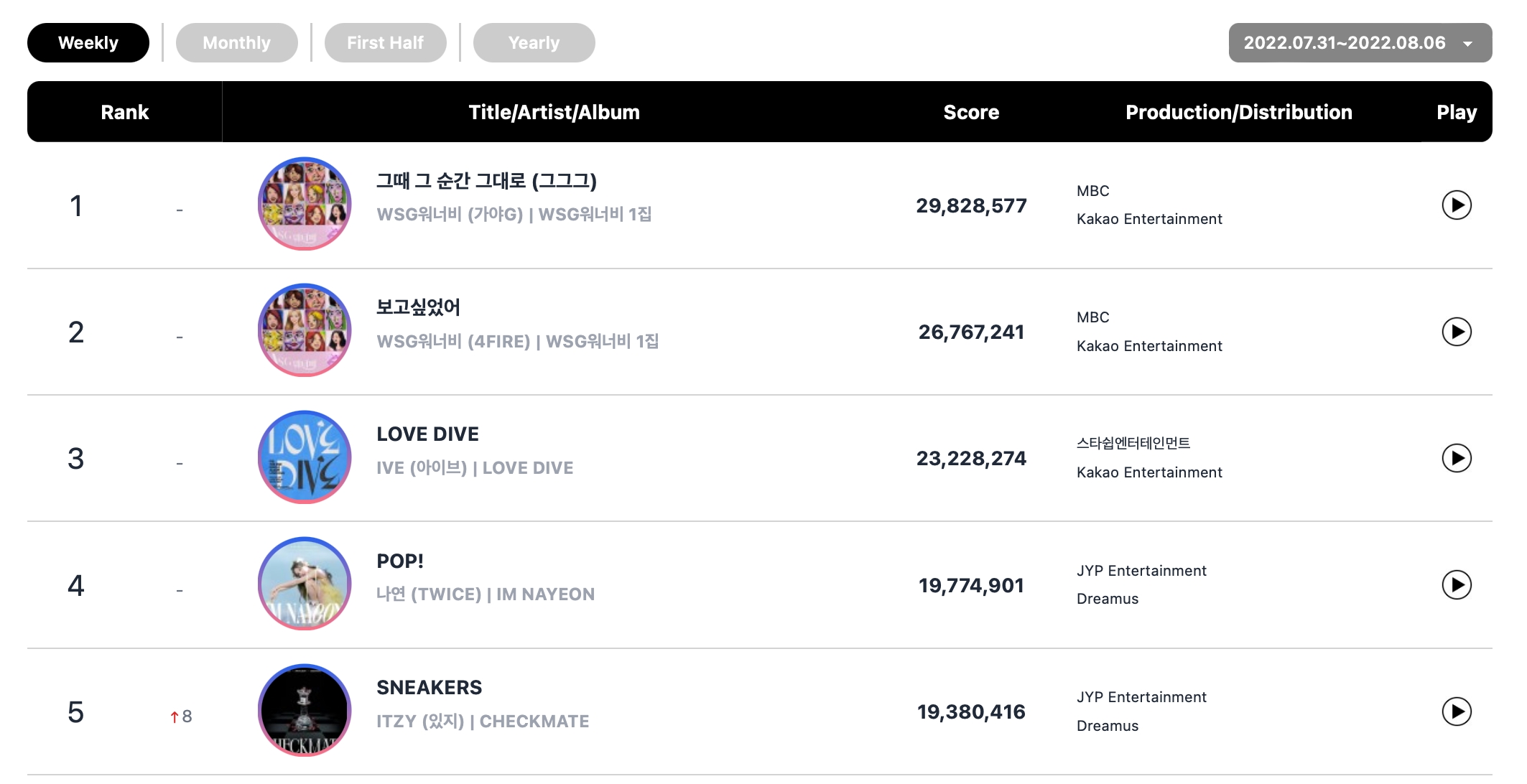 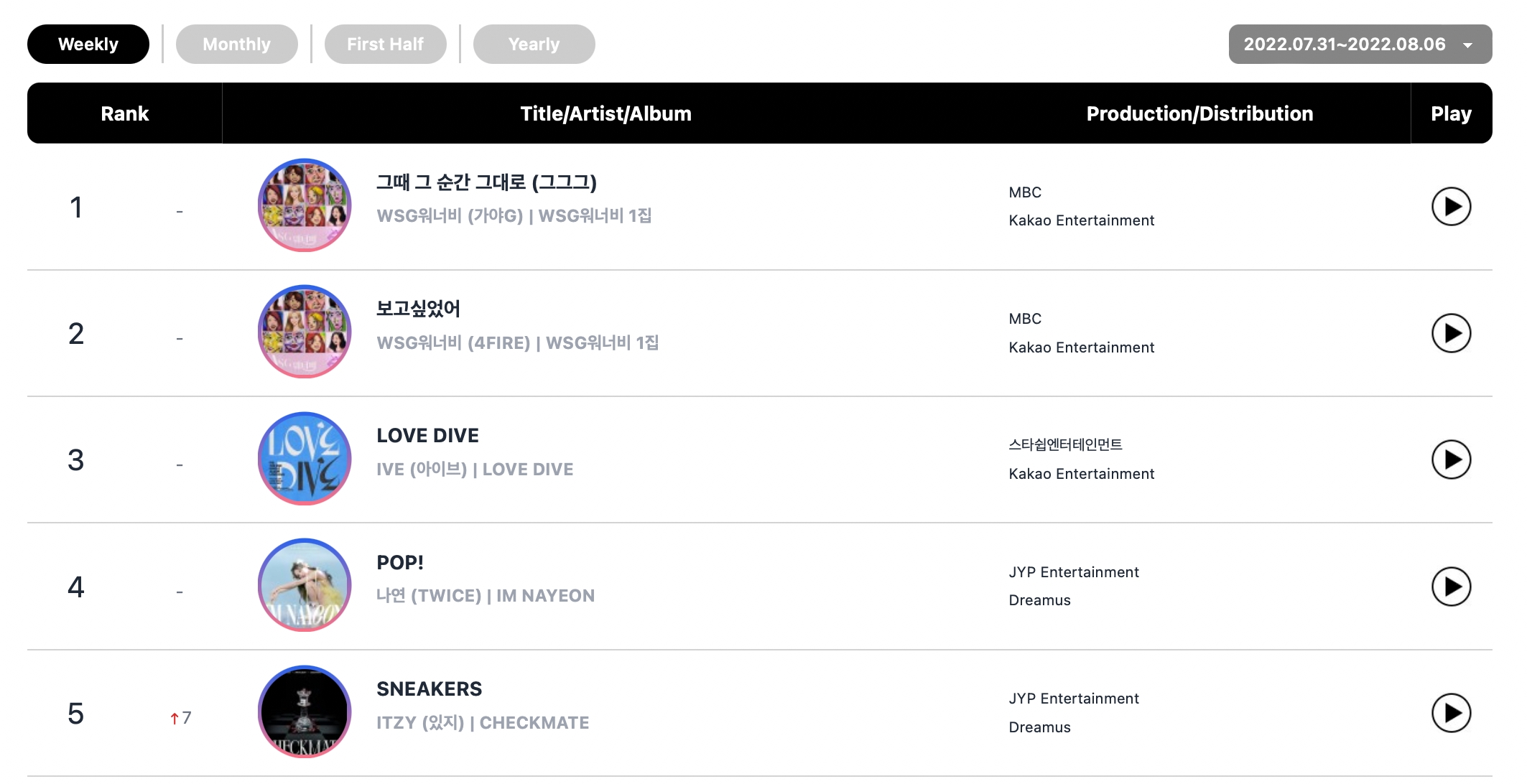 IVE’s long-running hit “LOVE DIVE” held onto its spot at No. 1 on the streaming chart for July, followed by WSG Wannabe (Gaya-G)’s “At That Moment” at No. 2 and WSG Wannabe (4FIRE)’s “I Missed You” at No. 3. 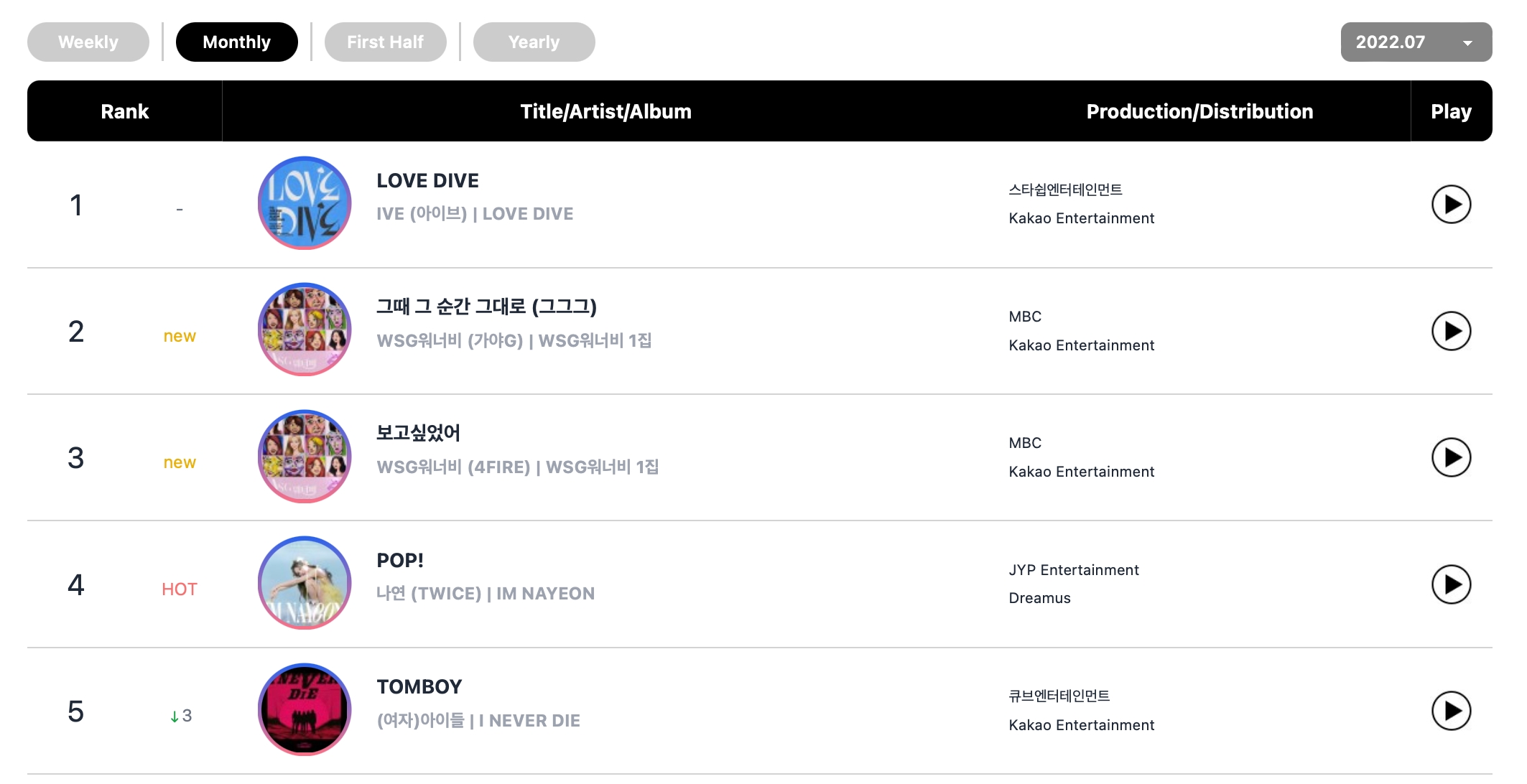 Once again, Lim Young Woong dominated the digital download chart, sweeping the top three spots for July with “If We Ever Meet Again” at No. 1, “Rainbow” at No. 2, and “Our Blues” at No. 3.

SEVENTEEN’s new title track “_WORLD” debuted at No. 4, while WSG Wannabe (Gaya-G)’s “At That Moment” entered the chart at No. 5. 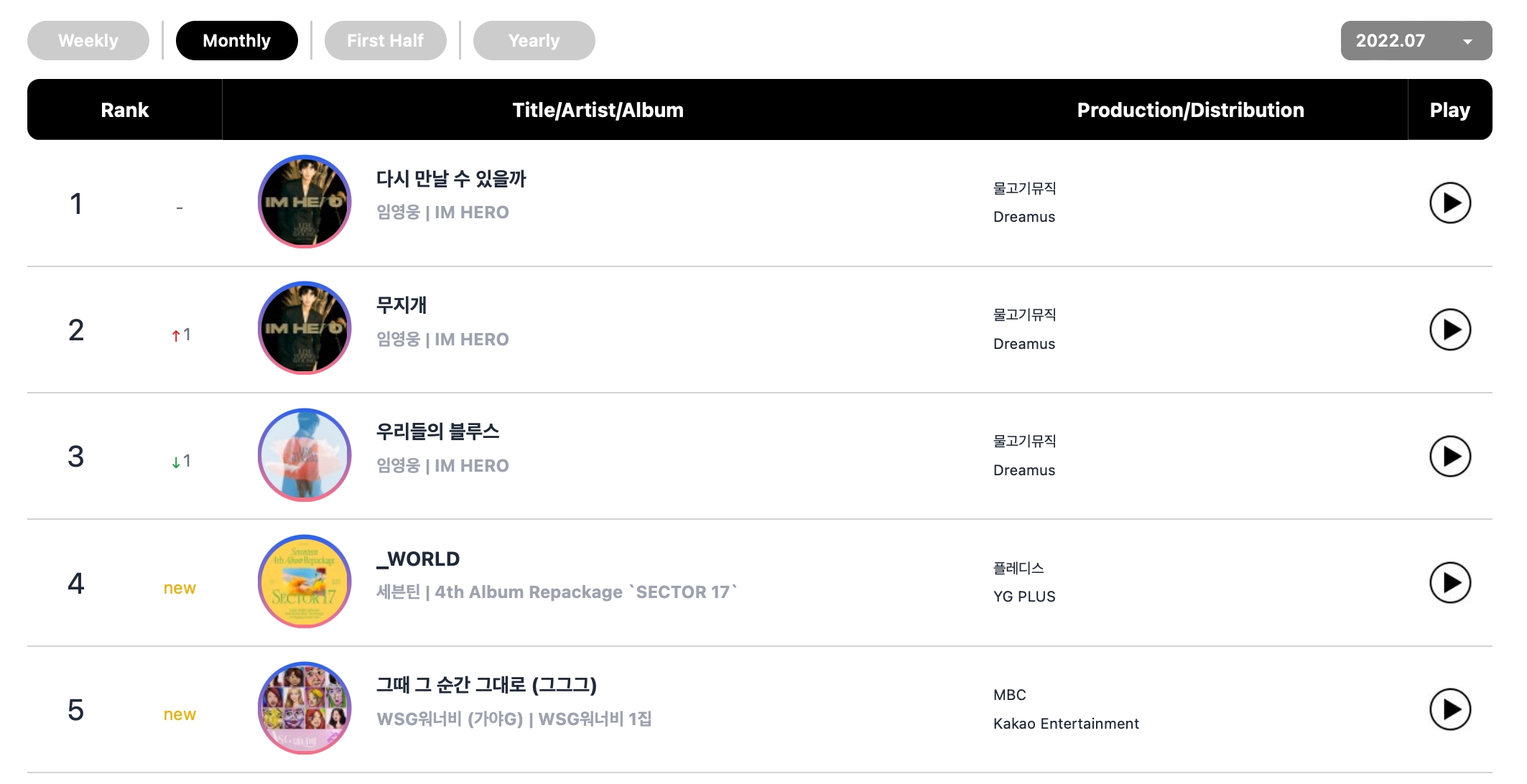 Lim Young Woong also swept the top three spots on the weekly download chart, claiming No. 1 with “If We Ever Meet Again,” No. 2 with “Rainbow,” and No. 3 with “Our Blues.”

Kim Ho Joong cleaned up the remainder of the top five, with his new song “Promise” at No. 4 and “PANORAMA” at No. 5. 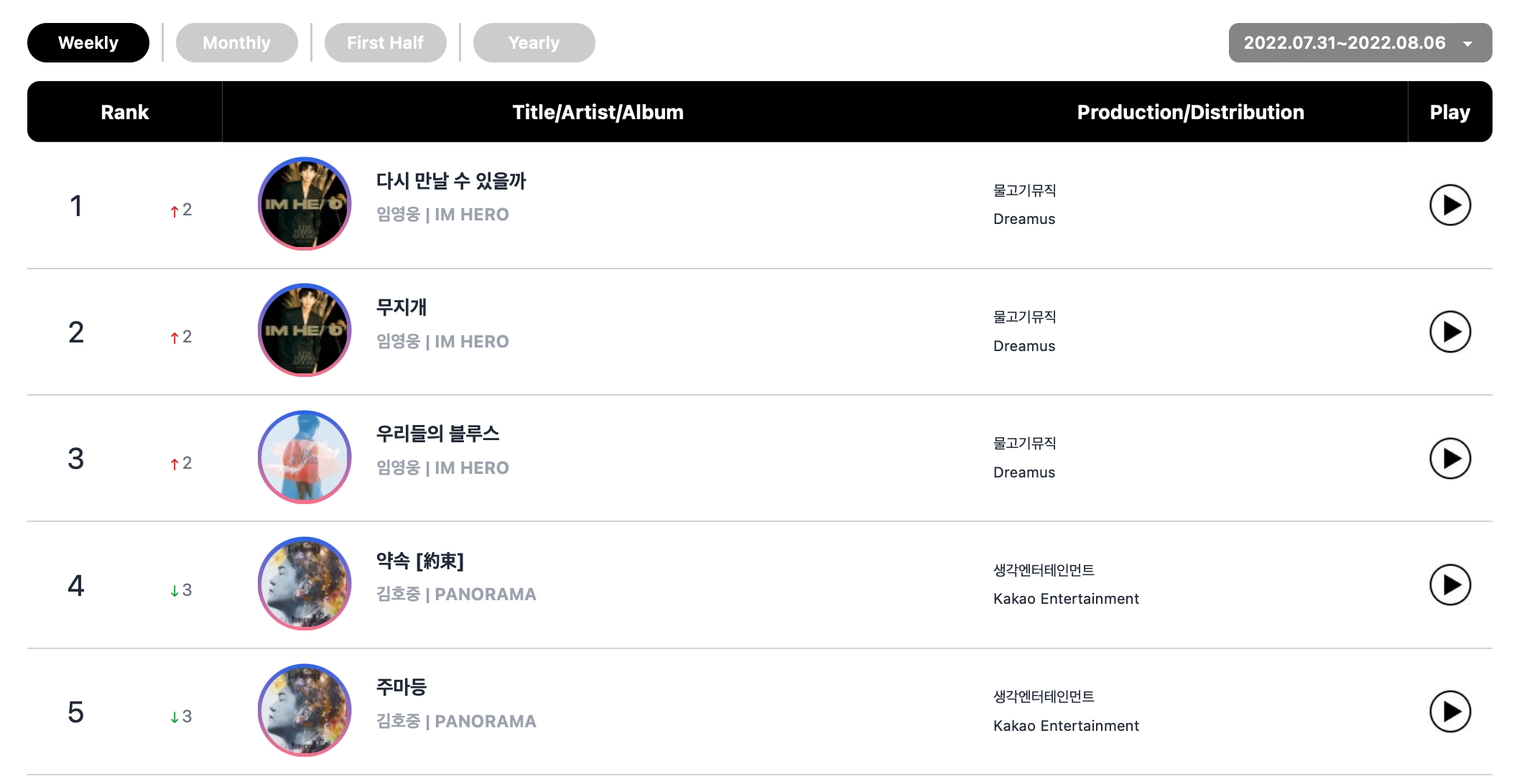 Nayeon topped this month’s new Global K-Pop Chart (which is based on global streaming) with “POP!”, while IVE’s “LOVE DIVE” followed at No. 2. 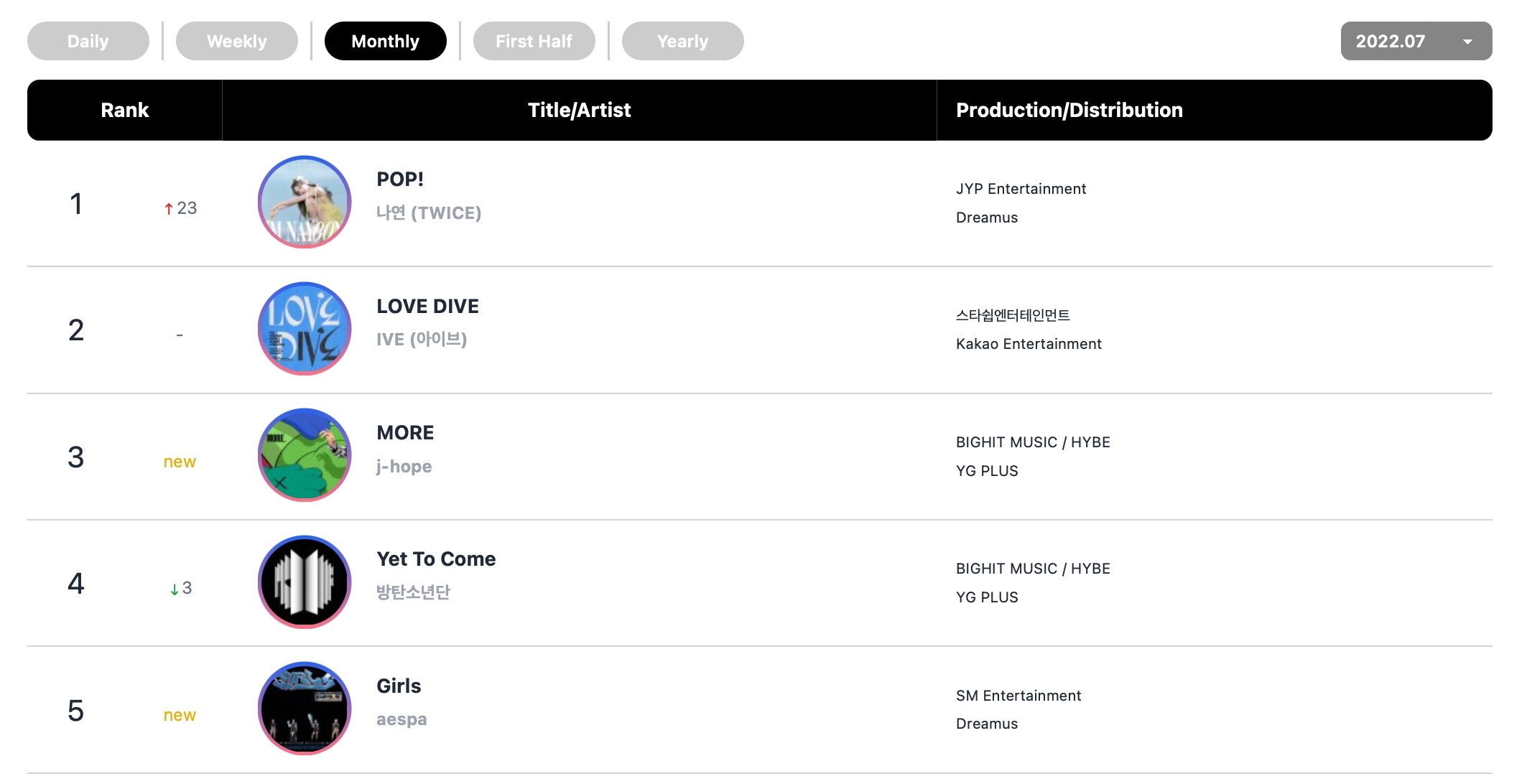 Nayeon also continued her perfect streak of topping the weekly Global K-Pop chart every week since its launch, with “POP!” remaining No. 1 for the fifth consecutive week.

IVE’s “LOVE DIVE” similarly held steady at No. 2 for the fifth week in a row, while NewJeans’ debut track “Attention” entered the chart at No. 3.

ITZY’s “SNEAKERS” maintained its position at No. 4, and aespa’s “Girls” rounded out the top five for the week. 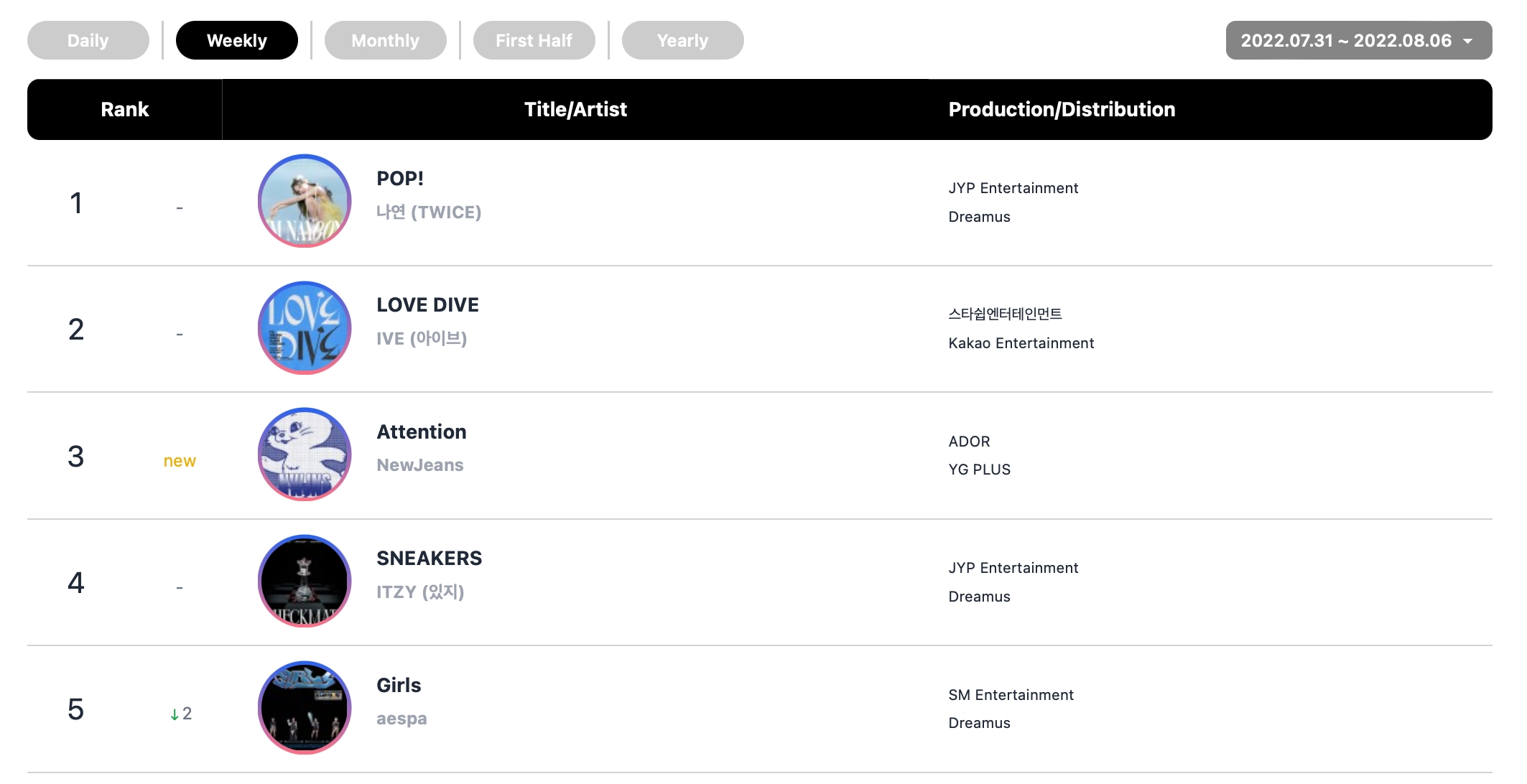 Once again, the top five artists on the monthly and weekly social charts were exactly the same: BTS remained No. 1, followed by BLACKPINK at No. 2, Jessi at No. 3, BLACKPINK’s Lisa at No. 4, and Lim Young Woong at No. 5. 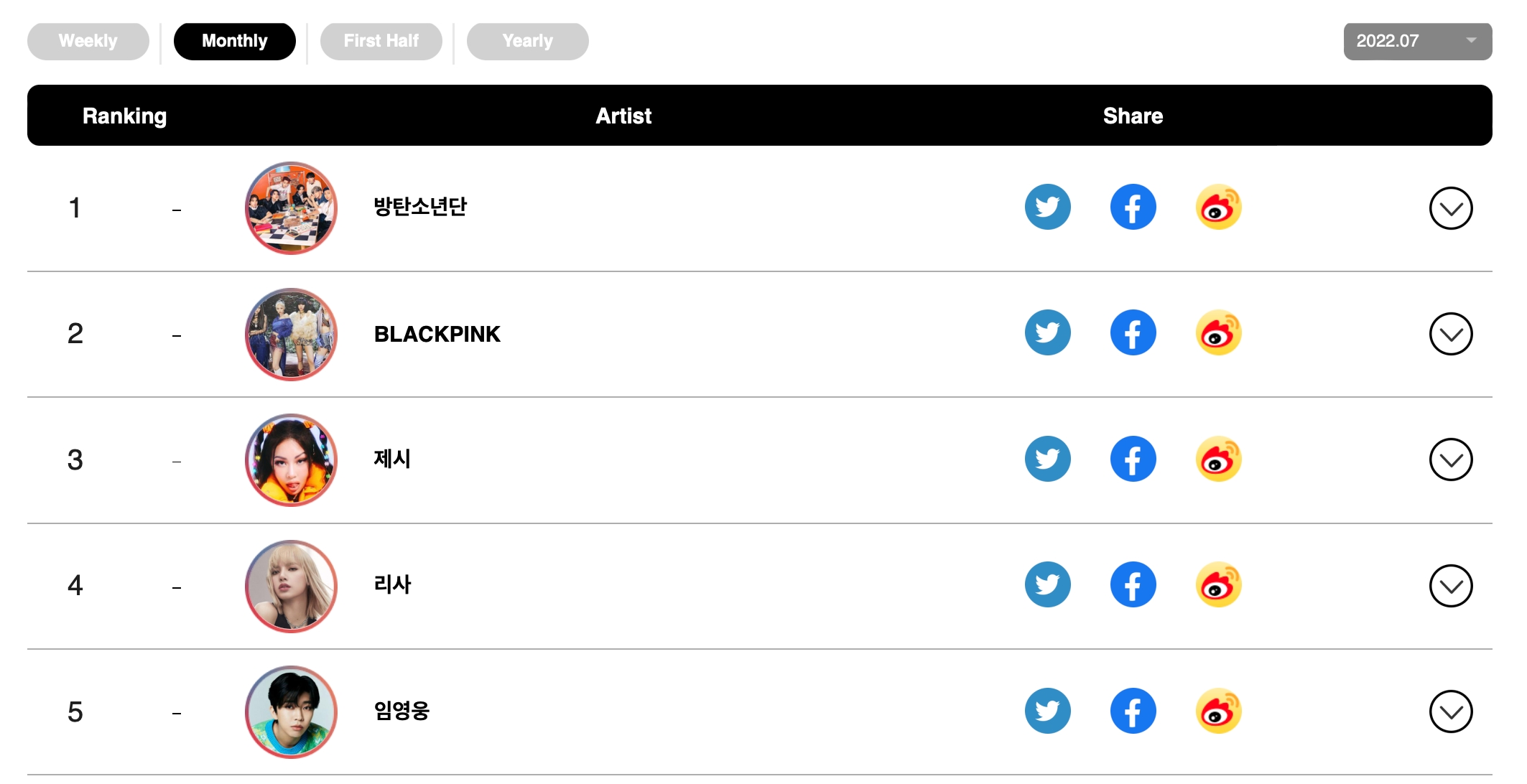 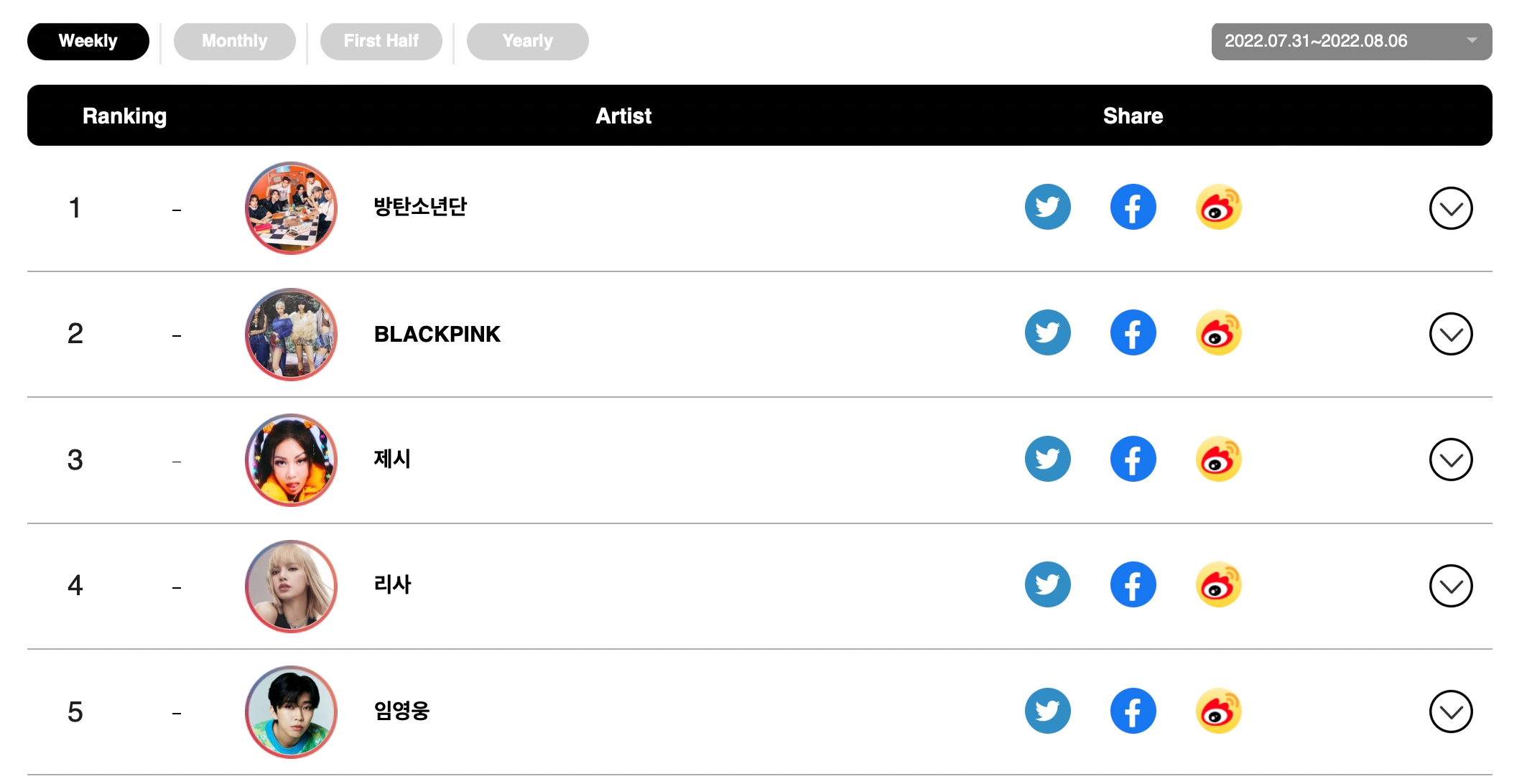 Watch WSG Wannabe on “How Do You Play?” with English subtitles below!