MBC’s “Big Mouth” and tvN’s “Little Women” swept all of the top spots on this week’s rankings of the most buzzworthy dramas and actors!

For the first time since its premiere in July, “Big Mouth” rose to No. 1 on Good Data Corporation’s weekly list of the dramas that generated the most buzz. The company determines each week’s rankings by collecting data from news articles, blog posts, online communities, videos, and social media about dramas that are either currently airing or set to air soon.

Meanwhile, tvN’s “Little Women” entered the drama rankings at No. 2 in its first week on air, while its stars claimed three out of the top six spots on the list of most buzzworthy actors: Kim Go Eun came in at No. 2, Nam Ji Hyun at No. 5, and Chu Ja Hyun at No. 6.

KBS 2TV’s “Gold Mask” climbed to No. 3 on the drama list this week (with stars Gong Da Im and Lee Hyun Jin rising to No. 7 and No. 8 respectively on the actor list), and KBS 2TV’s “It’s Beautiful Now” stayed strong at No. 4.

tvN’s “Poong, The Joseon Psychiatrist” rose to No. 5 on the drama list, while star Kim Min Jae shot to No. 9 on the list of most buzzworthy actors.

Finally, “If You Wish Upon Me” star Ji Chang Wook rounded out the top 10 on the actor list, while the show similarly climbed to No. 10 on the drama list this week.

The top 10 dramas that generated the most buzz in the first week of September are as follows: 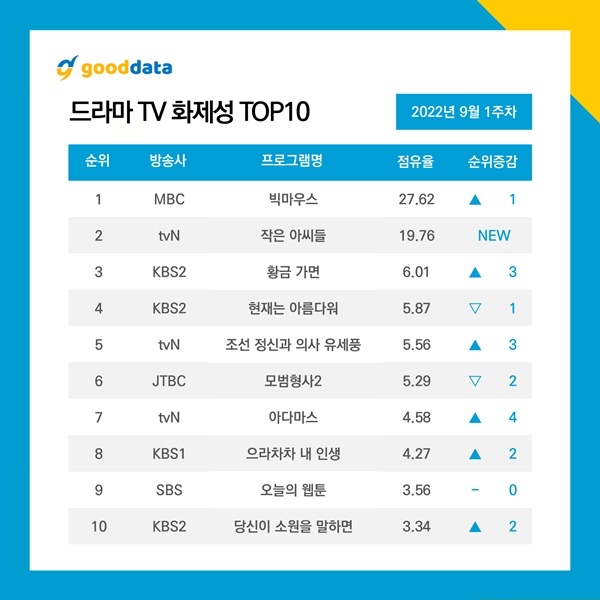 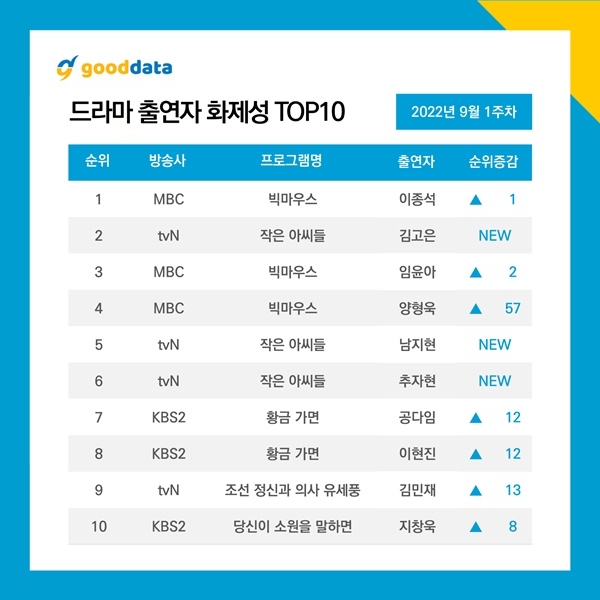