On November 16, OMEGA X held a press conference at the Seoul Bar Association in Seocho to discuss the abuse allegations against their former CEO.

During the press conference, the group’s legal representative Noh Jong Eon revealed that a lawsuit is currently under way to terminate OMEGA X’s contract with SPIRE Entertainment.

Lawyer Noh Jung Eon stated, “This is not just our problem but a societal issue. We took courage to change this. The unthinkable has happened in 2022 South Korea. We are currently carrying out a lawsuit to terminate the exclusive contract. Strong measures will be taken including criminal charges and request for compensation.” 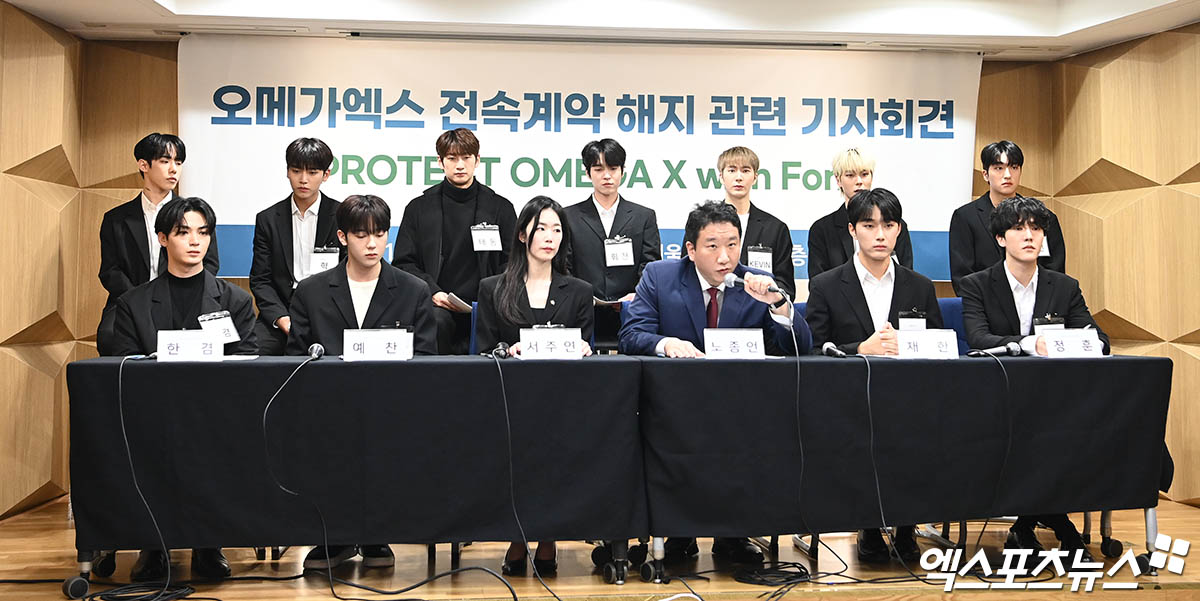 Last month, one of OMEGA X’s fans reported on Twitter that they had seen the CEO of the group’s agency SPIRE Entertainment hitting the members after their concert in Los Angeles. SPIRE Entertainment initially released a statement claiming that OMEGA X and the agency had “resolved all their misunderstandings.” After the controversy continued to draw attention, SPIRE Entertainment released an apology along with the announcement that the CEO in question had resigned. However, more allegations continued to surface.

OMEGA X’s legal representative announced the group’s plan to file a criminal complaint on the charges of assault, intimidation, indecent act by compulsion, and attempted threat. He added, “We have plenty of evidence including photos, videos, and voice recordings.” The lawyer claimed that the members were threatened after the assault incident and that they were sent a certification of contents telling them to pay 300 to 400 million won (approximately $230,000 to $300,000) per person. Furthermore, above CEO Kang was Chairman Hwang who ignored everything despite being aware of the situation. The law team announced their plans to receive compensation from Chairman Hwang and to hold him criminally liable for aiding and abetting CEO Kang.

Warning: Brief mention of suicide in the next paragraph.

The members also shared their individual stories. Jaehan revealed, “After practice was over, CEO Kang called me and forced me to drink. Sexual harassment was also involved. She touched my face and hand. After drinking, she called me through KakaoTalk. She lashed out by saying that if we are going to continue to be idols, we have to crawl. She also said she would commit suicide, so the members received therapy. We only wanted to be respected as people who love music.”

Jaehan reiterated that the members endured the treatment because of the fear that their last opportunity would disappear. He explained, “For all of us, it was our second attempt, and we did not want to waste time. We thought we had to endure for the fans who waited for us. As the oldest member and leader, I was so scared that our dreams would collapse while looking at our exhausted members. We held back and endured, but we have reached the point that we cannot endure any longer. We took courage for someone, for all those dreaming the same dream as us.”

Yechan also revealed that the CEO and Chairman were kind at first but they suddenly started to have a negative influence on their lives and values. Also mentioning the drinking sessions, Yechan added that the members were gaslighted. Hangyeom revealed that during company dinners, when the members didn’t drink in someone’s stead, they were treated coldly the next day. Sebin added, “They said there would be no next album if we refused to attend drinking gatherings.”

Lawyer Seo Joo Yeon also brought up the sexual harassment the members experienced, saying that they were touched on their thighs and faces so that the other’s breathing could be heard at the drinking gatherings they were forced to attend. Lawyer Seo also brought light to the mental and emotional abuse carried out by the CEO and Chairman by being kind to the members and abusing them later through their desire to promote as idols.

It was also revealed at the press conference that the members are experiencing anxiety following the abuse. In particular, Hangyeom revealed that he always felt anxious while repetitively receiving drunken calls, causing him to feel anxiety from everyday life noises including vibrations, alarm sounds, and bass sounds in music. During the period he talked alone with CEO Kang, Hangyeom expressed that he experienced trouble breathing due to the difficult situation.

Junghoon further revealed, “We have never even once received a sincere apology since returning home after such an incident occurred. Rather, they raised the discussion of our military enlistment. They threatened us by sending absurd statement of accounts. We made a resolve after determining that we could not communicate with them.”

Yechan shared, “I hope people are not hurt due to others. Everyone was born to be loved, and I hope that everyone knows that one’s existence alone is precious. I didn’t know that before and had a difficult time, so I hid in a hole. Now, I think I can overcome this.”

OMEGA X wrapped up by sharing, “We all did our best while dreaming of the same dream of becoming a singer,” expressing their hopes that this becomes an opportunity for those also experiencing unfair treatment. They continued, “There is also something we want to tell our fans. Above all, we 11 members could come to this place because we had the strength of our fans. Thanks to the fans, we took courage, so us 11 members will not give up, and we will continue to make music and performances while greeting fans by showing a good side of us.”

XPN
OMEGA X
How does this article make you feel?