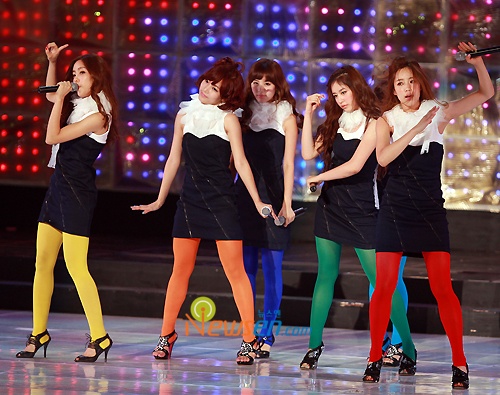 Well, this is going to be my 2nd time posting this.. since 3/4 of this and 2 hours of work went to waste randomly! So, August is coming to and end in only a few days, 2 to be exact. A lot of us have been busy getting ready for school, or even beginning school! I, myself, don’t start until September 8th, haha. I’m sad I won’t be able to be on Soompi as much.. but, I’ll learn how to writer better? haha. This post is going to be about what has happened so far in August 2009. Yes, I won’t include everything that happen.. or my wrists might fall off, I’ll only include the most biggest news. And yes, we have 2 more days left until the end of August, but it’s doubtful something too OMG-worthy will be happening in those 2 days. But if something does, I’ll for sure just edit it in.

On August 1st, it was announced Brown Eyed Girls‘ had taken over the #1 place on Illegal downloading sites with their song, Abracadabra. The Brown Eyed Girls had to overthrow MC Mong and 2NE1 to become #1. Downloads for the group’s comeback title song ‘Abracadabra’ made up 24% of all the downloads on the website. August 1st was also a very special day for Girls Generations‘ fans, it was Tiffany (Fany) Hwang‘s 20th birthday! The fanclub of Girls Generations‘ donated items such as a washing machine, a TV, and other electronic and medical devices such
as a suction pump to the Hansarang Baby Care Center for Disabled Babies
in Gyeonggi-do Gwangju under Tiffany’s name. On August 2nd, Bi (Rain) showed off his amazing beauty (so amazing..) for his clothing line, Six to Five, in Elle Magazine. August 2nd was also a very special day for the girls who are currently taking over the USA, Wonder Girls. They were picked by fans with an astounding 99% of votes in the Radio Disney contest, Pick It or Kick It, in which fans decide if they like the song and want it to be played on the Radio station. On August 3rd, Rain announced he would be launching his new boy group in September whom he has groomed and trained personally. It was announced on August 4th, 4minute was chosen Rookie of the month for August. Girls Generation also got into a car accident on this day, with nobody being injured except Hyoyeon, who had to head to the hospital for shock, but was later released that day.

On August 5th, claims against 2PM about plagiarism for the song, Again and Again, were announced. The song claimed to be a copy of American-singer, Envy‘s song, Shawty Dangerous. Envy‘s company did not take any legal action. Also happening on that day, Mighty Mouth‘s song, Love Class, was released. The song features Han Ye Seul and the Music Video features Uee from After School, and also Hyuna from 4minute. Former S.E.S member, Bada, also had her comeback album leaked that day, 1 day prior to the official release date. On August 6th, Actress Kang Eunbi, who is debuting as a singer as well, confessed recently that she had attempted suicide, thankfully she had not died. On this day we also found out Gill is dating Jewelry‘s Park Jung Ah. On August 7th, DBSK‘s member, Yoochun appeared in an airport.. with a brand new tattoo on his chest which read, Always keep the Faith. Additionally on this day, Brown Eyed Girls had gotten into a car crash. Their driver slightly collided with the car in front, yet nobody was injured thankfully. Park Hwayobi released her comeback Music Video, Rose, also on that day. On August 8th, Netizens were outraged over a sign flashed behind MCs during Music Bank. The sign, which writes ‘Lee MyungBak OUT’ was flashed behind the MCs during the show and left many people angered. Bada released her MAD Music Video as well on this day.

I’ll start out this section by saying.. sorry if I say also a lot! I can’t help it I have a small vocabulary, haha. On August 9th, G-Dragon released his first of many solo song teasers. A Boy, was released through his me2day (Korean Twitter). Netizens were shocked when they listened to Bada‘s MR removed version of her live performance because she sounded exactly like the recorded track, some of the Netizens’ comments were even as said, “Vocal capabilities like diva”. On this day, it was announced the re-debut of AJ, who is now joining into a new boy group under Cube entitled, B2st (Boys to Search for Top, pronounced Beast). On August 10th, the Teen Choice Awards were held, the best singer in the world, Britney Spears, was presented with the Ultimate Choice Awad, but we can talk about that some other time. The Wonder Girls were also one of the celebrities in attendance at the festival. There were conversations saying that “Bing Bing Bing“, song from FT Island’s 3rd album, resembles English band, McFly’s song, “Five Colours In Her Hair“, as well as plagiarizes it. On August 11th, Big Bang member, Dae Sung was involved in a car accident and had his nose fractured. Unlike Girls’ Generation‘s and Brown Eyed Girls‘ car accidents earlier this month, Dae Sung was seriously injured along with his manager. Another event happening on that day was that T-ara became unable to use the Internet and their mobile phones because their company didn’t want them to hear hurtful things and lower their spirit down.

On August 12th, the brand new duo, Honeysh debuted their first ever Music Video for their title song, Shall I Get Married. The video caused a lot of stirr for being very provocative. Lee Min Ki released his 1st Mini Album ‘No Kidding’ in Korea, as well on August 12th. Navi released her single, Wasteful Tears, featuring rap skills by Hyuna of 4minute on the 12th of August. The 3rd song released on August 12th that was causing stirr was Akon‘s song called Beautiful. Akon? Isn’t he American? Yes, but in the song, BoA was featured alongside him. Oh, 3 isn’t all, by the way. The Music Video and song of Baek Ji Young‘s comeback song, My Ear’s Candy, which also featured 2PM member, Taecyeon was released to public. On the 13th of August, Super Junior’s song Carnival, was released, the song was a cover of a group entitled, Chipz. Female rapper, E.via also revealed her comeback song and Music Video, Hey!, today. On the 14th of August, DBSK released their Music Video for, Pictures of You. On the 15th, Lee Ji Ah released her single, Cupcake and Alien to the public. On August 15th, it was announced late actress, Choi Jin-Shil‘s ashes had been stolen from her grave along with her tombstone smashed.

On the 16th.. wow, nothing much really happened. But on the 17th, (Queen) Lee Hyori released her CF for Hyundai I30. Jewelry also revealed their first song off of their new album, Sophisticated, as which the song is called Strong Girl. Brave Brothers‘ released their album Attitude, as well as the title track, Invisible which features Son Dam Bi and Lee Minwoo. Invisible is said to be a copy of rising American-singer Kat DeLuna‘s Unstoppable, and Kat DeLuna‘s company is currently taking legal action. Additionally on the 17th, Hwangbo‘s R2song / Arisong Music Video was revealed. On the 18th, G-Dragon revealed his much anticipated Music Video for the title song, Heartbreaker. It was announced today that F.T Island member, Lee Hongki would be starring in the new SBS drama, ‘You Are So Handsome’. On the 19th, the duo, Ten, who are also known a bit for being homosexual, released their Music Video for their debut song, the video is actually quite funny, too. On the 19th again, SeeYa‘s brand new member, SooMi was revealed to the eyes of the public.

I’m kinda hoping someone will actually put their time into reading all this, rofl. On the 20th, T-ara (Tiara) released their Poolside Music Video for their song, Lies. It was also declared that After School‘s Uee would be appearing alongside F.T Island‘s Hongki in the brand new SBS Idol drama. The Brave Brothers‘ released their Invisible Music Video on the 20th. On the 21st, ‘Heartbreaker’ became the #1 song up on illegal music download sites with 23% of the downloads accruing to the song. F.T Island’s Song Seunghyun turned 18 years of age today. On the 22nd, 2PM‘s Chansung was seen littering on their show, Wild Bunny, which evoked Netizens. Occuring on the 23rd, G-Dragon announced it’s true that Seung Ri and him do have disagreements, and also (insert another word for happening) on that day news broke that G-Dragon sold over 30,000 albums in under only 2 days! Kara‘s company, DSP Entertainment revealed that Kara is planning to follow footsteps of many Korean artists and pursuit a career in the Japanese fields. On the 23rd, SM Entertainment released a clip on their YouTube with a new girl group which was called f(x). f(x)‘s name was later released to mean flower x(x) = chromosome. Confusing, right? Actor Lee Dong-Wook had enlisted for the Army on the 24th of August. Also occurring on the 24th, it came out to be announced 2NE1 is going to be promoting all 4 songs yet to be promoted on their first Mini-Album.

On the 25th, actress Lee Young Ae revealed she had gotten married on the previous day to her boyfriend of 10 years. Also being announced on the 25th was that Lee Hyori would be making her comeback later this year in October. G-Dragon broke the 100,000 album mark on this day, additionally. The thief who stole Choi Jin-Shil‘s ashes earlier this month had been caught, he is currently awaiting trial. Accuring on the 26th, classy Jewelry revealed their Music Video aswell as their album, Vari2ty! Hwayobi also revealed her Music Video on the 26th, the Music Video and song feature her real-life boyfriend, rapper Sleepy. Fans of DBSK were devastated on the 27th when they found out DBSK would be suspending their activities. Also happening on the 27th, 4minute‘s debut album, For Muzik, leaked 3 days early with the traces leading to Venezuela. 4minute has claims of plagiarism around their song, Funny, with it sounding an awful a lot alike Britney Spears‘ amazing song, If U Seek Amy. On the 28th, 2NE1‘s 11ST CF was revealed to the public’s eyes. The 28th also was the date for MNET’s 3rd 20’s Choice.

Oh god, I’m about to pass out now. Hopefully someone learns/reads this even, LOL.