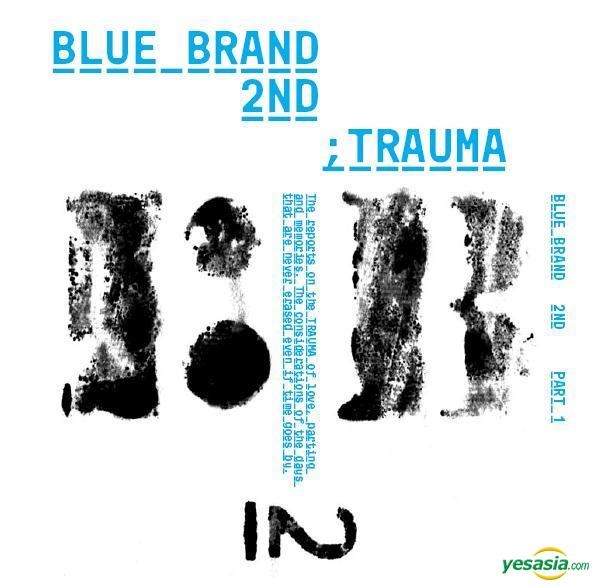 Korea’s top hip-hop and R&B artists have come together this year for a second round of Kim Gun Woo’s hip-hop project, “Blue Brand.” For those unfamiliar with the name, Kim is a famous hip-hop producer known for working with MC Mong in both album production and music composition. The following hit tracks are just a few of the many songs Kim composed: “Letter Written to You,” “I Love You, Oh Thank You,” and “Ice Cream.” The second volume “Trauma” is divided into two parts and like the title mentions, it revolves around the theme of trauma due to breakup. It was said that the producer and the participants of the album shared personal love and breakup stories with each other in order to get a better feel for the songs.

The album opens up with the title track, “Don’t Say a Word,” a duet number between rapper Kim Jin Pyo and ballad artist K.will. This beautiful medium-tempo ballad incorporates both mellow rap and emotional vocals to bring out the heartache one feels after a hard breakup. The yearning of an ex-lover’s return is quite evident due to the two artists’ singing. The melodic strings and piano arrangements also help bring out the mood.

The next track is “Love Is…” which contrasts highly in terms of music style with the previous song. Composed, penned, and sung by Brown Eyed Girls’ members JeA and Miryo, this upbeat dance number begins with synthesized instruments and heavy bass. JeA’s bold, yet smooth vocals scream out emotions as she sings about heartbreak while Miryo’s confident rapping skills complements well with her partner’s singing. This song is definitely recommended.

The album continues with “Trauma” a MC Sniper and Byul collaboration similar in mood with the title track. The medium tempo number once again combines rap and vocals together to create a moving ballad. MC Sniper’s emotional rap however is worth mentioning as listeners can definitely feel his earnest pains through his cries.

Dok2 and Gina continue on with “Soap Scent” a somewhat bubbly track with instruments reminiscent of Christmas jingles. The lyrics contrast with the song’s vibe as it talks about the pain that exists despite getting used to a breakup. This song seems to be a great break from the previous depressing songs in terms of melody.

“Didn’t Even Disappear” features one of my favorite artists, Saet Byul. Known as a featuree for many artists’ albums, listeners can catch Saet Byul’s alluring voice once again as she harmonizes beautifully with kebee’s flowing rap.

The album ends with a solid track “and sunset” sung by Rhyme Bus and Rossy PP. The song starts off with hauntingly beautiful piano arrangements that seem to echo in and out of the track. Rossy PP’s airy yet mellow vocals then begin, soon followed by Rhyme Bus’ rhythmic rap. This is one of my favorite songs off the album, and I recommend it a listen.

In conclusion, I must say that “Blue Brand” Volume 2 was a very strong album. Although some tracks were very similar with one another, there were distinctive points that could be heard in each track, making them all worth listening. Fans and non-fans alike should definitely take a look at this project album.