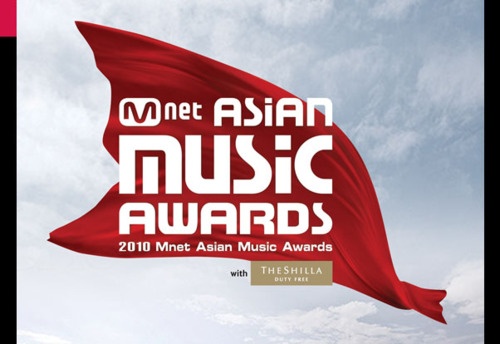 The 2010 Mnet Asian Music Awards took place on Sunday November 28th, 2010. The show was aired live from Macau and started at 7PM, ending three and a half hours later at 10:30PM (Korean Standard Time). The show was filled with special performances by artists from Korea and other Asian countries.

Here’s a recap of the show!

(Note: I caught the show late, so I have no notes from the majority of the first part of the show. Sorry!!)

Best Male Dance Performance – 2PM for I’ll Be Back

Asia Disc Award – i me (China)

Best Digital Single – Park Bom from 2NE1 for You & I

The first performance that I caught was 2PM. They were all wearing dark outfits with silver accessories and had heavy eye make-up on. At first, the members all performed bits and pieces of various songs separately. Woo Young sang “Without You”, Jun Su sang “Tired of Waiting for You” (기다리다가 지친다), Taec Yeon sang “Only You”, and Nick Khun sang “Heartbeat”. (I didn’t catch Chan Sung and Jun Ho’s performances). All of the songs were remixed into dark, sad versions. At the end, all of the members came together to sing their newest song, “I’ll Be Back”. Of course, as the “beasts” of K-Pop, the boys ripped off their black wifebeaters at the end of the performance.

Next, Miss A’s Min and Suzy introduced the best creative video for the Mnet relay project. The winner was Maeva Minouflet from France who did a video cover of Miss A’s “Breathe”.

i me (China) on the red carpet

Comments (not word for word, just general gist): “This is a very important award to me. I’m happy to meet so many fans here. Thank you, God. Yang Hyun Suk, thank you. Teddy, Kush, Choice 37, my Big Bang members – thank you. Also, DJ DOC asked me to mention them or else they’ll tell everyone my secrets. So, thank you Haneul. Thank you to all the fans who are always listening to my music and watching my performances. This is for you! Thank you!”

Jung Jae Yong: “Hello! (in Chinese) This award should have gone to UV – sorry for getting it!

Kim Chang Ryul: “But we’re happy to receive this prize.”

Lee Haneul: “I don’t think a lot of people here know who we are, so we’ll introduce ourselves with a song.”

DJ DOC then performed two of their hit songs, “Run to You” and “I Am Who I Am”. The performances were upbeat and full of energy. Actress and former Miss Korea Honey Lee joined the stage playing the gayageum, a traditional Korean instrument.

The next award presented was the award for Best Solo Vocal Performance. The award was presented by actor Song Joong Gi.

Comments (not word for word, just general gist): Thank you, thank you so much. First of all, I’m happy to receive this prize because I think it’s an award telling me that I have a good voice. I want to thank the YG family, producers, and all of the fans who love my music. I’ll work hard to do better in the future.

Comments (not word for word, just general gist): “Thank you for this award. I want to thank EE Media and Hunan TV. Music really has no boundaries. I hope to share my music with not just China but with those around the world. Thank you.”

Gummy, wearing all black, took the stage to perform her song “Because of You” and a duet with Jang Jiae. The duet was a Chinese ballad, sung half in Korea and half in Chinese. Gummy played the piano herself for part of the performance.

Junsu – “First, thank you for inviting us and giving us this award. We won’t disappoint you and will work harder in the future to live up to this award.

Comments (not word for word, just general gist): (Through a video) “Thank you for this award. I couldn’t be there because I’m on set for my drama. Stay healthy and be happy!”

And then it was time for 2NE1 to hit the stage. They sang three songs: Follow Me, Clap Your Hands, and Can’t Nobody. It was a huge performance with taiko drums, enormous screen images of dragons and eagles, and crazy outfits made out of what looked like pieces of glass.

Rap duo UV stepped on the stage to present the award for Best Band Performance.

Comments (not word for word, just general gist): “Thank you. 2010 was a very special year for us, being able to get awards like this. Kim C couldn’t be here for personal reasons, but I’ll share this happiness with him soon. Daum Media, family, fans – thank you. There has been a lot of interest in Korea lately for various issues. But no matter what, I hope there won’t be any war. Thank you.”

Min – “Hello! Thank you! First, thank you God for such a big award. Grandma, Dad, my parents, the JYP family, JYP, etc. – thank you!

After Far East Movement received their award, Super Star K 2’s winner Huh Gak took the stage to perform the song “This Is the Moment”. Although he looked a bit nervous in his black suit, he sang his heart out with a full choir standing behind him.

Tae Yang took the stage next. He performed his songs “Break Down” and “I Need a Girl”, pulling Sandara Park from the audience onto the stage with him. T.O.P and G-Dragon joined Taeyang on stage and both performed a plethora of songs including “Turn It Up”, “Go Crazy” (뻑이가요), and “Hallelujah”. The performance had sort of a storyline theme where T.O.P and G-Dragon were hunting down Taeyang and vice versa. The performance ended with all all three pointing guns at each other. Dramatic!

After a somewhat long commercial break, actor Kim Kang Woo introduced Chemistry (Japan) who performed two songs, “A Better Tomorrow” in Korean and “Piece of a Dream” in Japanese. The ten year veteran duo filled the venue with their voices and were then presented with the Best Asian Male Groupaward.

Far East Movement then took over the stage to perform “Girls on the Dance Floor” and “Like a G6” featuring Tamar. The performance was full of energy and had all of the audience on their feet, bobbing their heads and raising their hands to the music.

Chan Sung – “Thank you for giving us such a great award. We’ll do our best to spread hallyu more.”

Winner: 2NE1 (This was the 2nd year in a row that 2NE1 has received this award. Last year, they were presented this award for the song “Fire”)

CL – “Thank you to our director, who worked so joyfully with us. Teddy, our stylists – thank you. We’ll work hard to show you more fun and exciting music videos in the future.”

A special performance by the Wonder Girls was next. They sang a remix of “So Hot”, “2 Different Tears”, and “Nobody”. The performance was a bit different from what we’ve usually seen from the girls. Coming down from the ceiling, hanging on pieces of cloth, the girls looked and sounded confident and more mature than ever.

The last three awards presented were the biggest awards of the night.

The first was the award for Artist of the Year presented by actor Joo Jin Mo.

Sandara – “I was so nervous earlier that I couldn’t speak but there’s so many people I’d like to thank. Yang Hyun Suk, the YG family, my family, and the fans who always show us support.”

Minzy – “I want to say thank you to our fans who always support us!”

The award for Album of the Year was presented by actress Yoon Eun Hye.

CL – “Thank you so much. We took our time making this album this past year to fill it with as much as we can. We want to thank Yang Hyun Suk, Teddy, our stylists. There are so many people to thank! Thank you so much. We won’t rush our next album and we’ll make sure that it’s full (of our best efforts). Thank you!”

The last award for the night was the award for Song of the Year presented by actor Hwang Jung Min and actress Kim Jung Eun.

Min (bawling) – “Thank you so much! Thank you, JYP, for making this song for us. Our choreographers – we love you. Without our fans, we’d be nothing. I want to thank the members, too. We’ll work hard in the future. Thank you! We love you!”

And with this, the ceremony was over. The artists took the stage to say a final goodbye. Everyone was all smiles except for Miss A, who were in tears, still emotional from their final award and also probably from the other awards they received throughout the night.