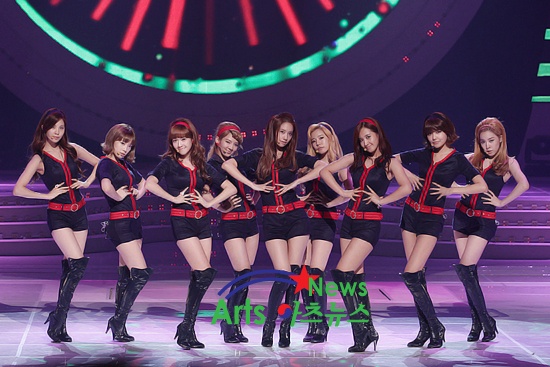 Music: James, Jansen, Larsson /  Lyrics: Lee Hyun Gyu
Album: SNSD mini-album “Hoot” Track 1 Purchase this album
Watch: MV Live Performance
Comment: SNSD remains No. 1 this week with “Hoot”. Asia’s number one girl group, SNSD makes a surprise comeback with a new mini album, “Hoot.” The girls have been quite busy this year promoting their second album with songs, “Oh” and “Run Devil Run” and debuting in Japan. The title track of the new album is “Hoot,” which showcases their upgraded vocals and emotions. SNSD joins 2AM (who they surpass this week) as the only artists in 2010 to score three No. 1 songs on our chart. Congratulations.

Music+ Lyrics: Kim Do Hoon, Lee Sang Ho, Shin Sa Dong Tiger
Album: Beast mini-album Vol. 4 Track 2 Purchase this album
Watch: MV Live Performance
Comment: Closing in on another chart topping hit is Beast’s “Beautiful”. Beast keeps coming back with new hits and returns already with their fourth mini album titled, “Lights Go On Again.” Fans are expected to get surprised with what the boys have in store for them. The title track is “Beautiful,” a bright, loving, listener friendly, and lively number confession song perfect for the upcoming winter. This week it moves up four more spots to No. 2.

Music: Kim Seung Soo, Han Jae Ho / Lyrics: Song Soo Yoon
Album: Kara 4th mini-album Track 2 Purchase this album
Watch: MV Live Performance
Comment: Kara who has been promoting and gaining popularity in Japan releases “Jumping” in both Korea and Japan. The title track is of the same title and is a pop dance number co-composed by Han Jae Ho and Kim Seung Soo. The song incorporates both retro sounds from the 80’s and current euro pop sounds. The song is about wanting to go back to the past to one’s past love. This week it moves up four spots to No. 3.

Music+ Lyrics: Bang Shi Hyuk
Album: 2AM Vol. 1 Track 2 Purchase this album
Watch: MV Live Performance
Comment: This is the double title track of 2AM’s first full-length album, ‘Saint O’Clock.’ It’s a ballad song about the emptiness and pain one is left with after a break-up, which is perfectly expressed through 2AM’s soulful voice. The listeners are bound to relate to the sad lyrics that are expressed through the serious voices of the members. (credits to Arirang TV – Pops In Seoul)

Music: Psy, Yoon Gun Hyung / Lyrics: Psy
Album: Psy Vol. 5 Track 2 Purchase this album
Watch: MV Live Performance
Comment: Psy’s “Right Now” drops two spots to No. 5 this week. This is his first album in four years. Known for his unique rap and dance songs, PSY has brought together an impressive team for his comeback album Psyfive. Cool’s Lee Jae Hoon features in the advance track “In My Eye”, while Seo In Young pitches in on Thank You. Brown Eyed Soul’s Jung Yup and YDG also participated in the album. The title track is “Right Now”. This song combines electronic arrangement along with Psy’s singing and rapping. Psy is our December Artist Of The Month. Check him out.

Music+Lyrics: Cho Young Soo
Album: Huh Gak first mini-album Track 1 Purchase this album
Watch: MV
Comment: Contestents of Super Star K Season 2 keeps hitting our chart, and winner Huh Gak releases his first mini album titled, “Whenever.” Included in the album is his debut track, “Whenever,” a ballad written by top composer Cho Young Soo. One can hear the powerful vocal of this up and coming talent on this song. This week “Whenever” is up another three spots to No. 6.

Music: Sun Woo Jung Ah, e.knock / Lyrics: e.knock
Album: 2NE1 Vol. 1 Track 5 Purchase this album
Watch: MV Live Performance
Comment: The hits keep coming from 2NE1’s first studio album, ‘To Anyone.’ This time the girls made a 180 degrees image change for beauty and elegance to perform this R&B ballad “It Hurts (Slow)”. The four members shared vocal equally, even for CL and Minzi who usually rap, sing extensively in this song. It is a perfect song as we get into the winter. This week it drops three spots to No. 8.

Music: Cho Young Soo / Lyrics: Ahn Young Min
Album: Tae Yeon, The One digital single “Like A Star” Track 1
Watch: MV
Comment: Our highest debut this week is a very special collaboration. The One and SNSD’s Taeyeon have come together to release a single titled, “Like a Star.” The two singers go way back. Ten years ago, prior to SNSD’s debut, The One was the vocal teacher for Taeyeon among others such as DBSG members. The song, “Like a Star” is a duet ballad number composed by hitmaker Jo Young Soo with lyrics penned by Ahn Young Min.

Music: Cho Young Soo / Lyrics: Wheesung
Album: Orange Caramel 2nd mini-album Track 1 Purchase this album
Watch: MV Live Performance
Comment: Orange Caramel who has done quite well with their debut song, “Magic Girl” returns this fall with a lovely image. Their title track is “Ah-Ing” which was created by the Jo Young Soo – Wheesung combo who also created, “Magic Girl.” The song is expected to be yet another hit with its trendy Korean sounds. The lyrics, “Again and again ah-ing ah-ing; I’m happy, so ah-ing ah-ing…” are very addicting and energetic. The song will be about the feelings formed over a crush. This week it is our biggest mover, up 25 spots to No. 10.

Music + Lyrics: Park Jin Young
Album: 2PM mini-album “Still 02:00pm” Track 2 Purchase this album
Watch: MV Live Performance
Comment: This is the title track of 2PM’s mini album, ‘Still 2:00PM.’ It’s a song with a blend of an R&B melody and Hip-hop and House rhythms. The appealing and powerful vocals of 2PM and the lyrics about a man who cries out for his past love are impressive. The key dance move that is reminiscent of the last scene from the movie, ‘Terminator 2,’ and the energetic performances by this group of beasts are bound to capture your attention. (credits to Arirang TV – Pops In Seoul)

Album: Supreme Team & Young Joon (Brown Eyed Soul) mini-album “Ames Room” Purchase this album
Watch: MV Live Performance
Comment: This is the title track of Supreme Team & Young-jun’s first mini album, ‘Ames Room.’ In this soulful hip hop number, the powerful rap by Supreme Team and strong vocals by Young-jun from Brown Eyed Soul come together to create a unique harmony. It is about pain after separation, but the fast beats that contrast with the sad lyrics make the song surprisingly vibrant. (credits to Arirang TV – Pops In Seoul)

Music: KCM / Lyrics: Yoon Sa Ra
Album: KCM “Alone Part 2: From My Soul” Track 2 Purchase this album
Watch: MV Live Performance
Comment: KCM returns with a new mini album, “Alone Part 2: From My Soul” which he produced himself. The title track is “Love Bear” written by the singer himself. It is an emotional ballad with unique vocals only KCM can bring out. The song is about finding love from a person who loves silently like a bear. This week it becomes KCM’s latest top 20 hit, moving up eight spots to No. 13.

Album: Outsider Vol. 3 Track 2 Purchase this album
Watch: MV Live Performance
Comment: Outsider returns this year with his third album titled, “Hero.” The rapper gained much interest in 2009 for having the skill to spit out words with great speed, reaching number one on various music charts. This third album is about the hero in everyone as each and every single person dreams and goes through many obstacles to reach his or her goal. This week “Hero” returns to the top 20 again at No. 14.

Music: Park Jung Wook /  Lyrics: Nine
Album: December Vol. 1 Track 1 Purchase this album
Watch: MV Live Performance
Comment: Male duo, December who has released quite a number of hits including “Can You Not Come Back,” the theme song for the drama series “Iris” along with “Love is Really” has finally released its first studio album, “A Story to the Sky.” The group has returned with new music styles, shifting from their usual medium tempo ballads to lounge music. One of the three title tracks, “Blinding Tears” is at No. 15 this week. “Blinding Tears” showcases the duo’s vocals skills as they sing about the sadness one feels over a loved one who has passed away.

Album: Lee Juck Vol. 4 Track 2 Purchase this album
Watch: MV
Comment: This is the title track of Lee Juck’s 4th studio album, ‘Love.’ It’s a song with a unique blend of dynamic rock sounds and a beautiful melody that will make you feel as if you’re flying across the sky. The dynamic electric guitar performance and the piano melody are impressive, and the innocent words like that of a child will linger in your mind for a long time. (credits to Arirang TV – Pops In Seoul)

Comment: “Happy Together” is a cheerful song that you couldn’t find in Woo Joo’s music before. It has bright and beautiful lyrics with a melody that can make you feel good. The song features r&b singer Hwayobi who also directed and sang the chorus. (credits to suejinners for translations)

Comment: One of the all time greatest Korean dramas with its theme song sung by one of the all time greatest k-pop girl groups. “All About Eve” starred Jang Dong Geun, Chae Rim, Kim So Yeon, and Han Jae Suk, and it was one of the earliest Korean dramas that introduced “hallyu” to oversea fans. On each episode we can hear this song multiple times. FINKL needs not much introductions, as members Lee Hyori, Ok Ju Hyun, Lee Jin, and Sung Yuri are still among the biggest stars in Korean entertainment.