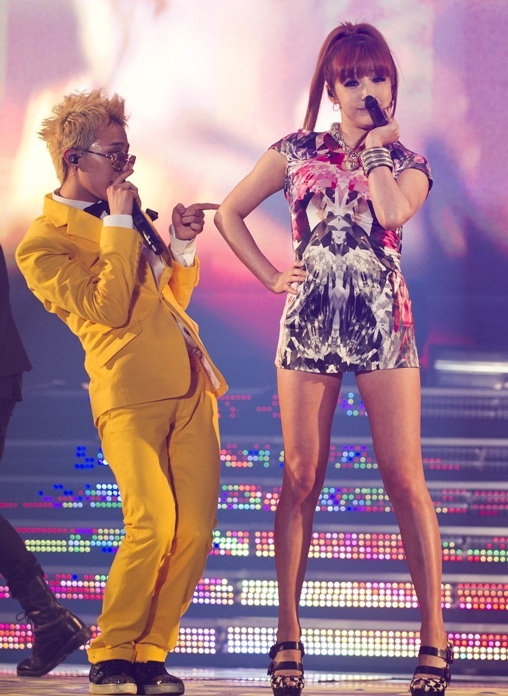 Yes it’s true, Park Bom will be releasing a digital single this coming Thursday and yes, it sounds amazing. Since her debut as the lead singer of 2NE1 with “Extended Play” and her first solo, “You and I,” we have been hooked on her unique voice and sound. Without warning YG Entertainment is releasing Park Bom’s new solo digital single “Don’t Cry” this coming Thursday. After getting to hear the full version today at the YG Entertainment studios I was excited and blown away. Excited because of the fact that Park Bom has a new solo and blown away by the vocals, beats, and sound of the new song.

We had two short teasers over the weekend released on Dara’s Me2day, one revealing the start to the song and the other in reference to Bom’s solo title “Don’t Cry” (as Dara wipes away supposed tears off Bom’s face).

As Dara’s me2day had revealed over the weekend the beginning of the track starts with a distinct piano beat, which is prominent throughout the song, and is joined with her voice and club beat breaking into song in perfect unison. As the piano beat continues it fades out and a club techno beat buildup fades in. Her vocals get more powerful, build up with the club beat, which leads into the chorus where Bom starts singing “Hey baby please don’t cry” as the club style beat hits its climax. She ends the verse with what sounded like “… without you my love” and the club beat fades away bringing back the distinct slower piano beat from the beginning of the song. This verse, club beat fade in, beat and vocal build up, club beat fade out, beat slow down, repeats throughout the verses in the song. The mid section of the song had more powerful vocals which also faded out as the climax was reached.

It was hard to place this song as sounding like anything else. Bom’s unique voice is just that and therefore this song didn’t sound like anything but YG Entertainments own style. I thought the beginning of the song with the piano beat reminded me of a slower version of Big Bang’s “Tell Me Goodbye.” The techno style buildup sounded very much like Big Bang’s song “Hands Up,” with the same club beat climax and then slow down after the climax leading into the next verse. I noticed that the song sounded like there was more than one voice singing at various times but was told and realized that it was Bom’s voice digitally overlaid. Each vocal sound is crisp and pure Bom, which was wonderful to hear when compared to the now very popular voice synthesizer which is often over used. The track is digitally mastered to fit perfectly together. The song has contrasting musical parts, Boms’ vocals with the soothing piano and then Boms’ vocals with the club beat background, which create a great mix.

The storyline behind the song is a breakup/ love song. You are left with the powerful line of “See you in the next life,” which makes you think she has moved on at the end of the song. The song is written and composed by Teddy who has already created other master pieces for YG Entertainment.

This will be yet another track to add to YG Entertainment’s wall of fame. I highly recommend adding this song to your playlist when it hits the stores. Due to Park Bom’s success in her previous solo “You and I,” it was only a matter of time before another solo would be released. She has grown so much more vocally and it shows, thank you YG Entertainment.

Content Use: Any use of this information is strictly prohibited without written consent from soompi.com (sormark@soompi.com). This includes quotes, impressions, personal opinion and the written preview of the song “Don’t Cry.” (this does not include Dara’s Me2Day teasers) This is considered exclusive content only for use by Soompi.com and legal action will be taken if any content is used without permission.

2NE1
Exclusive Preview
Park Bom
How does this article make you feel?