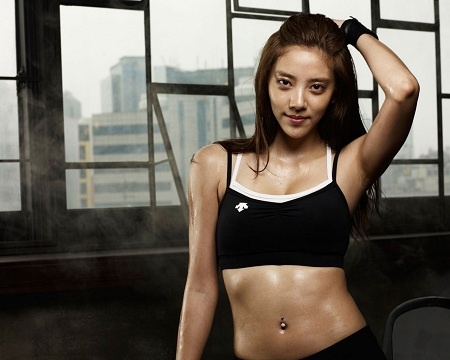 Currently, Son Dambi’s management agency revealed, “She’s skating three times a week, as well as doing other physical trainings.” She has both a strong work ethic and a competitive drive – making her one of the top contestants to look out for.

She confessed, “I’m really nervous, and everyone’s going to bring their A-game. I’m very competitive, and I hate to lose. So I’ll be doing the best I can.” Son Dambi is also monitoring Kim Yu Na. She added, “I’ve seen her practice her short program ‘Giselle,’ and the program is beautiful.” It’s been said that Son Dambi will be performing to “Black Swan.”

Figure skating Queen Yu Na will join Shin Dong Yup as hosts for the survival show, and she will also serve as mentor for the skaters. The concept of the show is fairly similar to ABC’s “Skating with the Stars.” The confirmed cast includes IU, Yunho, Son Dambi, Park Joon Geum, Cho Dong Hyuk, Lee Ah Hyun, and Suh Ji Suk. “Kiss and Cry” is scheduled to replace “Heroes” on May 22nd.