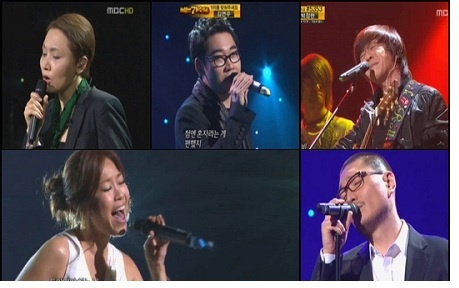 After a one month hiatus, MBC’s hit reality show “Survival: I am a Singer” is back at last, upgraded into a new format, along with more impressive top-notch singers! The show will keep its basic knock out format with seven contestants competing based on the mission songs they’ve received, having them ranked, and eliminating and replacing the lowest ranking contestant with a new singer. The show tweaked its format quite a bit as a new producer got on board over the rearrangement period:

New Changes in the Format

Previously in the show, each of the 500 live audience members was able to vote for one contestant who deserves first place and based on the voting results, the contestant with the lowest number of votes was eliminated. However, as a means of embracing musical diversity and reflecting the audiences’ opinion more clearly, the production team decided to change the voting system by allowing each audience member to choose up to three singers that they think presented the most touching performance.

2. Retake permitted, but not on the same day

Previously, the show received much criticism from viewers for offering a retake opportunity to Kim Gun Mo after his elimination, technically breaking the rule. Taking responsibility for this controversy, PD Kim Young Hee had to step down and was replaced by PD Shin Jung Soo. The new producer decided not to permit any retakes on the same day of the performance. However, he decided to open doors to the eliminated contestant who wants a retake by considering a second offer after the contestant practiced for a while.

Under the judgment that it’s realistically difficult to assess the performances of these legendary singers in Korea simply through a single competition, the production team decided to increase the number of contests. Aside from the original format of having the seven contestants compete every two weeks and eliminating one contestant, from now on the contestants will compete twice during the three week cycle and the final rankings will be calculated based on the results of both competitions.

So the three week cycle works the following way:

Through the three week practicing process and two heartpounding competitions, the show aims to provide the opportunity for all seven contestants to demonstrate their philosophy of life and music.

Personally, I think this is a great change because we will be able to see at least one more performance from each contestant! �de09 I thought it was a bit too harsh to disqualify and judge the contestants by just a single performance during that given week.

Since this was a new episode for a while, there was no mission and instead, the contestants were given the opportunity to introduce themselves to the general public. Each singer could sing one of their own hit songs and get a feel for the audience’s preference level toward them. I would say that this new episode featured the most mind-blowing performances of the whole show. While the three new singers who joined—Lim Jae Bum, BMK, Kim Yeon Woo—seemed quite nervous about their first performance, they all were able to pull it off superbly just like the pros they are. Throughout the show, I was so jealous of everyone in the audience who got to actually listen to all these breathtaking performances live! I think it was by far the most intense, heated, unpredictable competition of all.

Here are the clips! Enjoy the performances and try to guess what the rankings turned out to be for this competition �de09

Since the show, I’ve been listening nonstop to BMK’s “When Flower Blossoming Spring Comes” and each time I was blown away by her explosive and captivating voice! It’s so nice to see her in this show since more people will get to know about her and her great songs. Along with being a singer herself, she’s currently also a professor who teaches college students majoring in applied music. While she’s well-known as one of the strictest and scariest “tiger teachers” in the music industry, she seemed so feminine, warm-hearted, and even adorable in the show when she cried before the performance and appeared so nervous throughout the performance.

Although she later confessed she was nervous and anxious that once her performance was over she couldn’t remember anything about it, she managed to pull off a powerful and incredible performance… I would say that it was definitely one of the most powerful performances which left a strong impression on many. Just as a side note, although it’s a great song, it would be so difficult to sing it at a karaoke room… I wouldn’t even dare attempt to sing it �de09

Here are some of the comments made by the fellow contestants:

When the title “Missing Child” popped up, I was a bit surprised that she chose one of her fairly unknown songs to sing as I was expecting her to perform one of her hit songs. In the interview, she expressed her affection for the song: “It’s a song that I feel so attached to. I just love this song so much, whenever I have the opportunity to sing it, I sing it all the time, regardless of whether people know it well or not, thinking ‘I’m gonna make everyone like this song.(giggling) I just love the song so much!” Well it looks like she just scored mission accomplishment for at least one listener, because I just fell in love with the song after seeing her performance! �de09

Every time I watch her perform, I always wonder how she’s able to pull out such explosive energy from her tiny body. Once again, she showed a powerful, fascinating, emotional, and charismatic performance. I was amazed and impressed once again. I can’t wait to see her next performance!!! �de09

“The Best Vocalist of Our Time,” “Outstanding Vocals” Lim Jae Bum – “For You” (25 years since debut)

It was by far the most touching performance out of all of them. Even as I was watching his performance, I just couldn’t believe that I was actually watching him sing the song live on major broadcasting tv!

Although I have listened to Lim Jae Bum’s greatest hit & all-time classic “For You,” endless times in the past, I was so moved by his outstanding performance. His signature voice that’s deep and husky blended so well with the heartbreaking lyrics.

You could easily tell by watching his performance that he threw himself completely into his performance as he sang every note and line with all his soul. He mentioned in the interview that his greatest influence in his decision to appear on the show was his ten year old daughter “Jisu”! He stated that he wants to become a daddy that his daughter is proud of… Well it looks like he just became the daddy that his daughter will be sooooooo proud of!

Here are some comments made by the fellow contestants:

“We welcome back the king’s return!” –Kim Bum Soo
“He’s so awesome. He’s just so outstanding in singing.” –Park Jung Hyun
“He’s a legend to our generation. I think it’s a miracle to listen to him sing.” –Yoon Do Hyun

Kim Bum Soo stated in the interview that he had contemplated for quite a while whether or not to continue to remain on the show. But the major reason that enabled him to decide to stay was because his grandmother. He said that his grandmother told him, “I’m so happy these days because I can see my grandson’s performance every week on television.” He also confessed that he felt a lot of pressure after winning first place in the last competition as everyone around him started calling him the “First Place Singer.” I guess that pressure might have got him. Yikes… his ranking plummeted this time. I hope your grandmother wasn’t too disappointed to see her grandson receive lower rankings… I’m sure you’ll be able to rebound next week since you have an amazing voice! �de09

Personally, I didn’t think it was a bad performance overall, but then again it wasn’t all that impressive either. I would say that the performance was a bit plain, nothing particularly special or captivating enough to grasp the audience’s full attention relative to the other performances which were so powerful and emotional. Also, I’m guessing that his song choice might have been another factor that possible led to lesser votes as he chose to sing a fairly unpopular song “That’s the Reason.”

“Exemplar among All Vocals,” “God of Ballad,” “Voice from Heaven” Kim Yeon Woo – “Are You Still Beautiful” (16 years since debut)

When the title “Are You Still Beautiful” popped up, I was so excited because it’s one of my all time favorite ballad songs! However, I would have to say that I was a bit unimpressive by his lackluster performance without much sense of emotion or appeal. I had a hard time becoming fully immersed and moved by the performance.

Anyways, Kim Yeon Woo is also renowned as the “teacher of music stars.” His students include Big Mama’s Lee Young Hyun, SG Wannabe’s Lee Seuk Hoon, Brown Eyed Girls’ Jea, and Lim Jung Hee. Currently, he is the dean of the applied music department at Seoul Art College. And it turns out that BMK is also an adjunct professor at the same college! It will be quite interesting to see how the battle between these two professors turns out! Guys, all the students are watching you… good luck! �de09

Yoon Do Hyun’s “I’m a Butterfly”

What a lovely song with poetic lyrics and a beautiful melody. She stated in the interview, “I chose to perform this song because I wanted to share to the audience that this is what I felt and this is the kind of love that I went through in a talking manner.” Her deep and emotional voice blended so well with the song… it was quite touching performance indeed.

And so the final ranking results are:

Were the rankings similar as to what you expected? Were there any ranks that were off that surprised you?

BMK
I Am A Singer
Kim Bum Soo
Kim Yeon Woo
Lee So Ra
Lim Jae Bum
Yoon Do Hyun
How does this article make you feel?