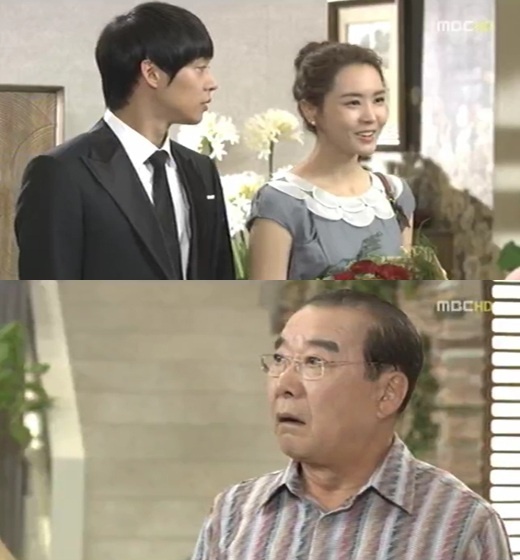 After Yoo Hyun and Mi Ri started officially dating, he cautiously revealed, “My dad is the CEO of Mondo Group” in order to introduce her to his parents. Mi Ri, who was aware of the fact, made a surprised face, pretending that she was shocked, as she demanded “How could you deceive me?” Yoo Hyun apologized, “I’m sorry. Can you please forget everything else and just think about me? Please understand that I did this so that I could meet you.”

However, as Mi Ri continued to pretend that she was fuming, Yoo Hyun confessed “I love you. I’m upset that I have to confess my love to you in this kind of situation, but I really mean it. I love you.”

Things have been going on the way Mi Ri had planned as Yoo Hyun revealed his identity to her. She followed alongside Yoo Hyun to meet his father In Soo (Jang Yong) and confessed that they have promised to marry each other. However, his step mom Lee Hwa (Choi Myung Gil) gazed at her suspiciously, foreshadowing that she might possibly influence Mi Ri and Yoo Hyun’s relationship.

MBC’s “Miss Ripley” received viewer ratings of 13.2% yesterday, a slight increase of 1.3% from Monday, according to statistics by AGB Nielsen Media Research. Meanwhile, SBS’s “Lie to Me” and KBS’s “Baby-Faced Beauty” which are aired during the same time slot received 8.7% and 14.6%, respectively.