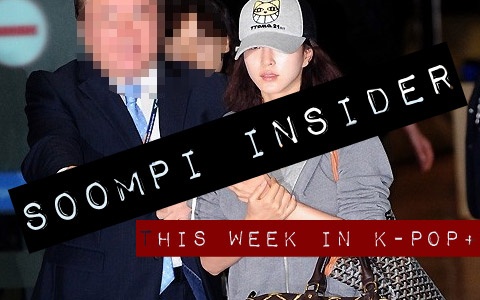 A North Korean spy infiltrated the Korean entertainment industry, became a huge star, and then fell off the grid – that may as well been the story with the amount of hoopla surrounding Myung Wol the Spy’s lead actress going AWOL this past week. Han Ye Seul blurred the lines between K-Drama and reality when life imitated fiction with her sudden disappearance, and even stranger sudden reappearance. Live-shooting dramas are notorious for driving actors to utter exhaustion, and Han Ye Seul decided she had to make a statement on behalf of all those suffering under this system. It’ll be interesting to see what effect, if any, her controversial actions will have on the industry.

Last week, TOP surprised us by going blond, and this week Jay Park continues the platinum trend, inspiring our tribute to our boys gone blond. The hot (non)couple of the week is SNSD’s Jessica and 2PM’s Taecyeon – are they or aren’t they already! G-Dragon’s fans did something amazing for his 23rd birthday, donating almost $20,000 to a childrens hospital in his name, since he asked them not to get him anything this year. Will.i.am wants to make our girls 2NE1 global superstars, and miss A’s Min is a fan of a global superstar, YouTube king Ryan Higa.

Rookie bi-racial group CHOCOLAT made their debut this week, while all the biggest acts in K-Pop performed on the same stage at the Incheon Korean Music Wave Concert in front of 40,000 fans. Talk of a possible Full House 2 starring No Min Woo has gotten a lot of people excited, while we say goodbye to the sweet drama Heartstrings. Jaejoong’s Protect the Boss has passed the coveted 20% mark, and the highly anticipated drama comeback of Choi Ji Woo starts this week – Can’t Lose, with Yoon Sang Hyun (our beloved “Oscar” from Secret Garden).

On a sour note, the ultra-popular show Star King got a lot of heat for their insensitive portrayal of Muslims, and there was yet another casualty this week when Dal Shabet’s Subin tumbled off the stage.

Lots and lots of pretty photos this week!

Instead of just one video, I present to you all the major live music performances this week:

We currently have 2 great giveaways going on – both are super easy to enter, with sweet prizes. Be sure to check them out, and good luck! I’ll resume my own little giveaways next week when these are over. (^_^)v

What was your favorite K-Pop moment this week? Share with us in the comments below!
– soomp!