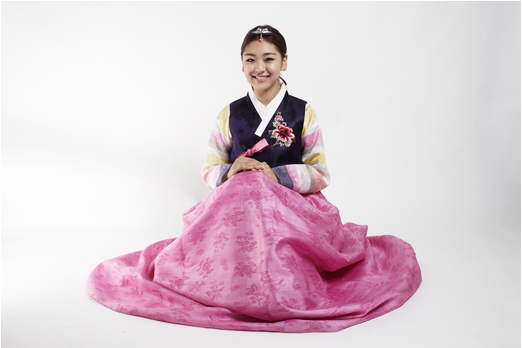 Kwon Ri Sae rose to popularity after appearing in MBC’s “Star Audition” earlier this year in May.

For her fresh young look and emotion-packed performances Ri Sae gained attention since the beginnings of the show. After she went through the painful experience of being eliminated in April, she continued to work hard and pushed forward with her dreams, landing herself in Bae Yong Joon‘s company Key East. She has been slowly preparing to start anew her career in Korea.

After being a part of MBC’s “Star Audition,” Ri Sae also appeared on variety program “We Got Married.” Her virtual husband was no other than Star Audition colleague, David Oh.. September 17 will mark their last “We Got Married” episode together. Ri Sae states that although it was a short three months, she got to experience and learn many things from the show.

While wearing a beautiful handbok in respect for the holidays, Kwon Ri Sae shared her feelings about her participation in “We Got Married” and her plans for the future. With her aegyo filled way of talking she also shared a bit of her past and what ambitions she has for her career.

“There are so many things I got to do through ‘We Got Married’ and to only think it was three months. It really makes me wonder how little time had passed. But it was a really fun experience. When I made typos sending text messages David would often correct me. When I met T-ara‘s Eunjung Unnie, she even complimented that I chose a good husband.”

“You have to find a better man now.” At this joke the reporter threw at Ri Sae, she got a bit flustered and even started to fake cough. “In situations like this you say ‘I want to concentrate on my music for now'” advised the reporter, which made Ri Sae laugh out loud.

With “We Got Married” and a Chuseok special with various other idol stars set to air, Ri Sae now has a celebrity profile and is starting to get to know of her seniors and juniors in the business. However, she states that running into her “Star Audition” buddies was when she is the happiest. She has run into Park Chung Gak, Son Jin Young on the Chuseok special filming.

At the end of season two of MBC’s “Star Audition” that started to air on the September 9 will produce the first generation of juniors (hoobaes) for Ri Sae.

Ri Sae states, “I’m so curious that I’ll be sure to watch every episode. It seems a bit weird to call them my juniors, but I truely wish the best for their success.”

It is only but fitting for Kwon Ri Sae to having emotional feelings of affection towards the show. Attending a Korean school in Japan, Ri Sae dreamed of becoming a singer in Korea ever since she was little. And it was MBC’s “Star Audition” that made her dream come true.

Kwon Ri Sae states that being on “Star Audition” changed her life. “When I was little I liked to sing and dance, so I wanted to be a singer, but I never got to audition in Japan. There really wasn’t a definitive reason, but there was something about Korea that made me want to start there. Because my heritage is Korean, I’ve always wanted to learn more about my culture.”

Seeing the hallyu blow strong in the direction of Japan during her school years made Ri Sae proud. “The defining moment of the start of hallyu had to be the drama ‘Winter Sonata.’ It was popular among the Koreans living in Japan at first, but then it spread to the rest of Japan. After that attention for Korea, especially K-Pop, began to increase on Japanese TV and magazines. I was really proud.”

And it came to be that Bae Yong Joon, the star of “Winter Sonata” is Ri Sae’s senior at Key East. Although she has not met him in person yet, she wants to say to him “we are now one family” when she finally meets him.

“I learned Korean traditional dance so I’m used to wearing a hanbok, but since I’m dressed up for the holidays it’s a new and different feeling. This Chuseok holiday I get to eat all of my favorite Korean foods, and spend time with my mom. And I really want the time to rest because I caught a cold.”

Ri Sae stated that now “We Got Married” is over she is going to start working on an album. There is no definite time schedule yet for an album release thus far.