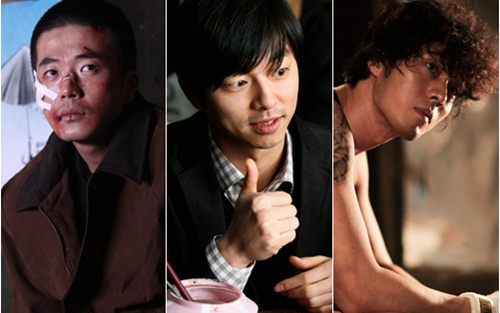 Kwon Sang Woo will act as Nam Soon, who leads a tough life fighting, but his genuine heart is unmatched. His rugged facial features and manner of speech gives people a wariness, but he opens his heart to Dong Hyun, played by Jung Leo Won, due to her heartwarming words. His childlike innocence and the way in which he treats Dong Hyun will touch the heart of the audience.

He was highly praised, “Because of Kwon Sang Woo’s exceptional acting, Kwang Kyung Tek will surely become known for ‘Pain’ than any other of his works.”

Gong Yoo‘s acting in “Finding Kim Jong Woo” and MBC drama’s “1st Shop of Coffee Prince” is a contrast to his upcoming film “The Crucible.” Previously seen playing gentle, romantic characters, Gong Yoo plays a character from a poor lower middle class: a newly-appointed teacher In Ho at a special school for the deaf. Gong Yoo uses sign language in many scenes, encouraging the audience to understand In Ho through his eyes and expressions.

The film is based on Gong Ji Young’s best-selling novel: a true story about an art teacher fighting against the principal and fellow teachers who were abusing deaf students.

So Ji Sub was famed for playing a romanticist in the KBS drama “I’m Sorry, I Love You,” He’s coming back this October for the movie “Only You.” So Ji Sup will play Chul Min, one who devotes his life for Jung Hwa (Han Hyo Joo) who is slowly losing her eyesight.

Chul Min was a previous K-1 fighter and challenges himself to train newbies. So Ji Sub shows his tough side in this role. On the 26th, the movie tickets for “Only You” were sold out in 7 seconds on the Busan International Film Festival ticket website.

Gong Yoo
Kwon Sang Woo
Only You
Pain
So Ji Sub
The Crucible
How does this article make you feel?