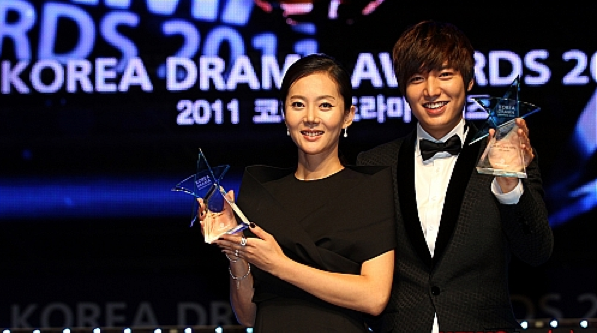 Winners of the "2011 Korea Drama Awards"

The 2011 Korea Drama Awards was held on October 2 to honor and award the dramas, production, and actors and actresses that so many of us are fans of.

Kim Eun Sook won two awards as Best Writer of “Secret Garden,” which also won the top prize. The competition for the top prize included other popular dramas such as “Sungkyunkwan Scandal,” “Best Love,” and “Sign.” Lee Min Ho was another lucky winner that night with the Best Actor award for “City Hunter” and the Hallyu Star Award. Kim Soo Hyun also nabbed two awards with the Best Male Newcomer award for his sweet country boy role in “Dream High” and the Popularity Award.

Congratulations to all the winners! The year hasn’t ended yet, but it still has been a great year of Korean dramas.