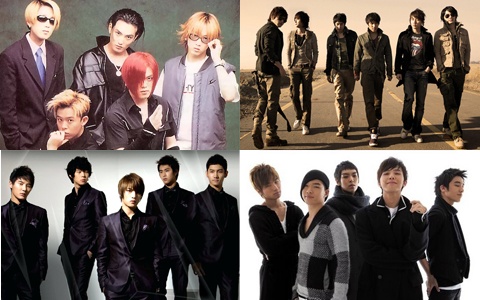 A few months ago we had posted [Video] History of K-Pop Girl Groups: 1996 – Present which showcased 61 different girls groups that had debuted in the past 15 years. After a lot of research and editing we can now bring you our own special video History of K-Pop Boy Groups: 1996-Present.

In this video we have 95 boy groups spanning from 1996 to today, October 20, 2011. Going in order of their debut, each group has 10 seconds of one of their popular songs played.

Things have definitely changed from the late 90s era of H.O.T., Shinhwa, and g.o.d. As mentioned in the girl group article, while many seem to have disbanded or faded way over time, some have had members go into a solo career, producing for other acts, or even acting and modeling.

As you probably noticed in the recent years, more groups have been debuting at a faster pace. The last five and a half minutes of the video are spent covering 2010-2011.

In trying to include as much as possible, there are also hip hop groups/duos, bands, an acoustic duo and a trot group in the video.

How much of an old-school K-Pop fan are you? Do you remember these older groups?

Fun fact: If you add up all the members, you get more than 400 guys!

More Notes:
-Rookie group M.Peror released a single earlier this month but no official music video. More upcoming boy groups this year are M.I.B, ESQ, Boyz and MYNAME. Add these in and we reach 100!

-While I added project groups Homme, SM the Ballad and M&D to the video, I didn’t add in the the Super Junior sub groups (K.R.Y, T, Happy, M) or F.T. island‘s subgroup F.T. Triple.