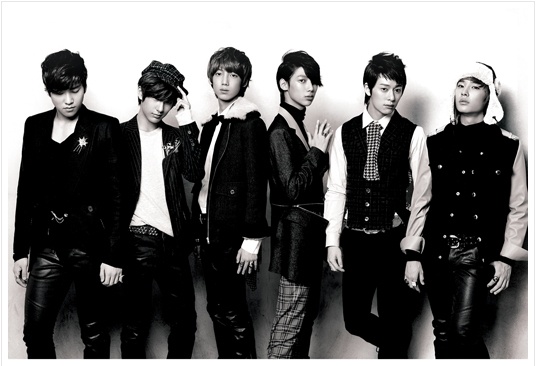 Rookie group, Boyfriend has already returned for its third single, “I’ll Be There” after having much success with “Boyfriend” and “Don’t Touch My Girl”. The group has collaborated with Korea’s top producer, Sweet Tune, making this album all the more anticipated. The new title track is “I’ll Be There”, an electronic pop dance track. The melody and the lyrics are beautiful and fit well with each other. Fans will be able to see Boyfriend’s bright image through this new single album.

Korea’s top vocal group, Monday Kiz has returned with its second mini-album, “The Ballad”. Through this album, the members hope to accentuate their sad and mournful voices. Monday Kiz’ own leader, Lee Jin Sung took responsibility in producing this album and top lyricists such as K.Will and 4men participated in this highly anticipated album. The title track is “Follow”, a Lee Jin Sung composition. The song starts off with beautiful electronic piano arrangements. The song is about a man who is unable to let go of his past memories after a breakup.

Ali, known for her angelic voice has released her first album titled, “Soulri”. Korea’s “Midas Hand”, Choi Jun Young produced this album which has songs of various genres ranging from ballad, hip-hop, jazz, R&B, to electronic music. The singer also took part in composing and penning five of the eleven tracks, proving her musical talents as a singer-songwriter.

SM Town gives a Christmas Gift to fans all over the world this holiday season by releasing “The Warmest Gift”. It’s been four years since the company’s last winter album. Top artists such as Kangta, BoA, DBSG, SHINee, SNSD, and f(x) each have sung a song, making it a total of eleven songs. There are seven new songs as well as remakes of famous Christmas carols.

Chocolat, who has received a lot of attention earlier this year for their mixed-blood members has returned with its first mini-album titled, “I Like It”. The title track is of the same title and was composed by the Swedish composer who had also written SNSD’s “Genie”. It is a fresh bokgo dance number. Also included in the album is “Same Thing to Her”, a beautiful ballad number that showcases the girls’ mature vocals.

U-Kiss’ Alexander returns as a solo artist this winter with a digital single album titled, “I Just”. The title track is of the same title and is an R&B song with lyrics about confessing in a shy manner to a girl he loves. “Oh Baby” on the other hand is a bright addictive dance number that showcases Alexander’s cute charms as well as his rapping skills. Last but not least, is the bonus track, “Bad Girl”, a song about missing a girl who has left his side. The first two songs were sung is three different languages – Korean, English, and Japanese, to cater to fans all over the world.

Infinite, who has done incredibly well this year with “Be Mine” and “Paradise” has returned this winter with a Christmas song, “White Confession (Lately)”. It is a sweetune composition and fans will be able to see each of the member’s individual innocent charms in this cheerful song.

Huh Gak and rookie rapper, LE have come together for a single titled, “Every Time That Song is Turned On”. The song was composed by Rado and penned by LE himself. As the title of the song suggests, this number will allow listeners to cherish their memories through this song.