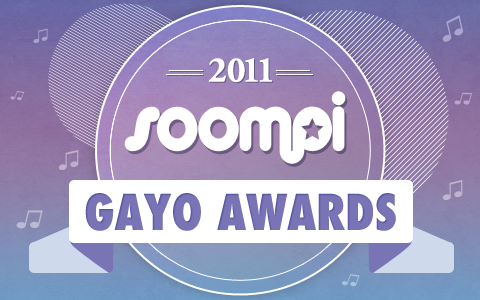 Ladies and Gentlemen, the moment you have been waiting for – The 2011 Soompi Gayo Awards results.

2011 has been another booming year for K-Pop music as it continues to increase its international status. It is worth noting that many talented artists who debuted two or three years ago are now really coming into their own, as reflected in the results of many categories.

Our results are based on each artist’s overall performance on our weekly music chart throughout 2011. We have taken into account the number of hit songs each artist has, and how they fared on our chart. You may find some of the results surprising, but considering how these artists performed in 2011, they deserved to win.

Thanks to every Soompi member who voted for the top 10 singers of 2011. There were a total of 8580 voters and their votes represent 40% of the score in this category, while the other 60% comes from our weekly music chart scores.

Note that we are collaborating with MYX TV this year and they will broadcast the awards show with all the results below on January 10, 2012. We thank MYX for producing the show. Be sure to tune in!

T-ara – Roly Poly
Despite very strong competition this year, “Roly Poly” is the runaway winner and is our 2011 Song of the Year. The strength of this song is its longevity. It spent 19 weeks (almost five months) on our chart, including eight weeks in the top 10 and two weeks as No. 1. No other hit song lasted this long in 2011. In fact, “Roly Poly” is still ranked on many of Korea’s music charts as I write this! Congratulations to T-ara.

Best of the rest:

Girl’s Day – 반짝반짝 (Twinkle Twinkle)
This song spent 13 weeks on our chart in 2011, including five weeks in the top 5. The highest chart position was No. 4 on April, Week 2. This song puts Girl’s Day on the map and its popularity made more fans to pay attention to Girl’s Day. “Twinkle Twinkle” is also No. 25 on our year end top 50 songs. Congratulations.

Mighty Mouth (feat. Soya) – 톡톡 (Tok Tok)
This song spent 12 weeks on our chart in 2011, the highest chart position was No. 3 on February, Week 3. There is another version of this song featuring Kim Bum Soo, but the version with Soya was far more popular and was being promoted. “Tok Tok” is also No. 30 on our year end top 50 songs. Congratulations.

Baek Ji Young – 그여자 (That Woman: from SBS Drama “Secret Garden”)
Three of the six nominees were from the SBS drama “Secret Garden,” including Baek Ji Young’s “That Woman” and Hyun Bin’s “That Man” which had the same melody. Both songs appear on our chart and were very close in scoring. Baek Ji Young edged out Hyun Bin to win this category. This song also paved the way for Baek Ji Young as she sang many drama OST songs in 2011, earning her the new title “OST Queen.” Congratulations.

After the enormous number of new artists that debuted the past two years, the number of rookies in 2011 was reduced dramatically. This indicates that the market has become saturated and the competition is so fierce record companies don’t want to risk launching more new artists at the moment.

Back to this award, the three female nominees ruled over the three male nominees, as was the overall trend in 2011. Dal Shabet had the advantage of debuting the earliest (in January 2011), and have already released three single albums in 2011. They have had three hit songs, one each from their three single albums: Supa Dupa Diva (No. 4), Pink Rocket (No. 14), and Bling Bling (No. 5). Congratulations!

Superstar K2 winner Huh Gak took home the top male soloists award in 2011. Huh Gak placed six songs on our chart in 2011, more than any other male soloist. His hit songs were “Whenever” (No. 4), “Happy Me (feat. John Park)” (No. 40), “Don’t Forget Me (from MBC Drama “The Greatest Love”)” (No. 15), “Hello” (No. 3), “Only Say That I Want To Die” (No. 7), and the latest with LE, “Every Time That Song Is Turned On” (No. 7). Fans outside of Korea may not be familiar with Huh Gak as he and other Superstar K alums still haven’t been allowed to appear on all networks to promote their songs. However there is no question that Huh Gak is a great great vocalist. Congratulations.

IU and G.na were neck to neck all year for this category. They both got off to a great start in early 2011 with chart topping hits “Good Day” (IU), “Story Only I Didn’t Know” (IU), and “Black & White” (G.na). In the summer when IU was not active, G.na took the lead with another hit, “Top Girl.” IU came back late in 2011 with her second album and the No. 1 song, “You And I”. IU is the only artists in 2011 to have three No. 1 songs on our chart. The final score is a lot closer than what it appears as it takes IU the last week of the year to overtake G.na and repeats as top female soloist. IU is also the only artist to repeat as the winner of the same category from last year. Congratulations.

Infinite is the surprise winner here by a large margin, but not so surprising if you look at their outstanding chart record and the progress they showed in 2011. Infinite had six hit songs on our chart in 2011. They are “Before The Dawn” (No. 15), “Nothing’s Over” (No. 5), “Can U Smile” (No. 32), “Be Mine” (No. 2), “Paradise” (No. 2), and “Lately” (No. 8). “Be Mine” is their biggest hit and it finished No. 4 in our year end top 50. You can see the improvement Infinite had over the course of 2011. Not bad for a group that was still relatively unknown to many fans at the beginning of the year. Their rise was phenomenal. Congratulations.

Based on our chart results in 2011, Secret is clearly the winner in this category. They had three hit songs and all were No. 1 or No. 2. Secret started the year with the 5-week No. 1 song “Shy Boy,” then in the summer with another 2-week No. 1 song, “Starlight Moonlight.” This song is also No. 5 overall in our year end top 50. Capping off a strong 2011, they released their first full length album with the No. 2 hit “Love Move.” Keep in mind that “Love Move” was stuck behind SNSD’s “The Boys” every week – otherwise they would have scored their third chart topping hit. Secret’s rise is not so much of a surprise as they had already shown flashes of greatness in 2010 with their No. 1 song “Madonna” and No. 3 song “Magic.” Also, their talent is widely regarded within the industry. Congratulations.

Mini-Album of the Year:

2NE1 – Mini Album Vol. 2
Mini-albums usually only have one hit song, maximum two. But this album had five hit songs – “Lonely,” “I Am The Best,” “Hate You,” Park Bom’s solo hit “Don’t Cry,” and “Ugly.” The first three were released previously as digital singles. “Ugly” is the real title song. With this many hits, 2NE1 Mini-Album Vol. 2 is clearly our 2011 mini-album of the year. Congratulations.

Album of the Year:

Big Bang – Big Bang Special Edition
Of the ten songs recorded on this album, five appeared on our chart in 2011 – “Tonight,” “Love Song,” “Stupid Liar,” GD&Top’s “High High,” and Seungri’s solo “What Can I Do.” Another song, Taeyang’s solo “I Need A Girl,” was a hit in 2010. No other full length album is even close to matching Big Bang Special Edition. Therefore it is crowned 2011 Album of the Year. Congratulations.

Secret
Their overall chart score of 16,870 tops all artists in 2011. Congratulations once again.

2NE1 tops the list as the top 10 singer. They are third overall in votes and fourth overall in chart scoring. Super Junior finished second after being the top vote getter. The rest of the 2011 Top 10 Singers include Infinite, Secret, Big Bang, T-Ara, Wonder Girls, SNSD, IU, and Beast. Congratulations to all.