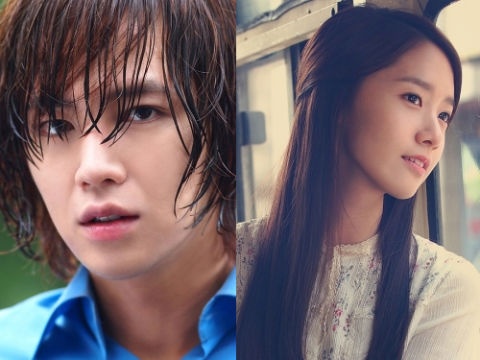 Last year was a drama wonderland – packed with widely-popular series like “Secret Garden,” “City Hunter,” “49 Days,” and more – but now it’s time to look ahead to what dramas will air in 2012. Four new dramas will air this week, and several others have fans waiting at the edge of their seats. All three major broadcasting stations will broadcast new Wednesday-Thursday dramas (SBS “Take Care of Us, Captain,” KBS “Wild Romance,” and MBC “The Moon that Embraces the Sun”) tomorrow January 4, making it a very exciting and competitive race for the ratings. We’ve picked out a couple upcoming dramas that you should be on the lookout for in the next couple of weeks! Check it out!

“Wild Romance,” starring Lee Dong Wook, Lee Si Young, and SNSD’s Jessica, will air its pilot episode tomorrow, January 4. The rom-com is a love story about judo-athlete-turned-body guard Yoon Eun Jae (Lee Si Young) and baseball player Park Mu Yeol (Lee Dong Wook). Through a series of unexpected events, Yoon Eun Jae becomes Park Mu Yeol’s bodyguar. Their relationship develops as they bicker and fight over their clashing personalities. However, as they slowly grow fond of each other, Kang Jong Hee (Jessica), Mu Yeol’s first love, comes to the rescue – no scratch that – she comes to complicate the love line between Mu Yeol and Eun Jae.

The Moon that Embraces the Sun (January 4)

“The Moon that Embraces the Sun” is a fantasy historical drama (sageuk) set in the Joseon Dynasty and stars “Dream High’s” Kim Soo Hyun, “Witch Yoo Hee’s” Han Ga In, “Baby-Faced Beauty’s” Kim Min Seo, and “Flower Boy Ramyun Shop’s” Jung Il Woo. King Lee Hwon (Kim Soo Hyun) and his half-brother Prince Yang Myung (Jung Il Woo) fall for the same girl, a shaman named Wol (Han Ga In). Wol, whose real name is Yeon Woo, was the Crowned Princess, betrothed to the then Crowned Prince Lee Hwon. She was plotted against and “executed” by those who were both jealous and fearful of her beauty and wits as a young girl. “The Moon that Embraces the Sun” is written by Jung Eun Gwol, who also wrote last year’s “Sungkyunkwan Scandal,” starring JYJ’s Yoochun, Park Min Young, Song Joong Ki, and Yoo Ah In.

“Dream High 2” is the sequel to last year’s hit “Dream High” and stars T-ara’s Jiyeon, SISTAR’s Hyorin, Ailee, Kang So Ra, and 2AM’s Jung Jinwoon. Park Jin Young reprises his role as one of the teachers at Kirin Arts High School, which is in dire financial situation and in danger of shutting down. The second season will showcase the fierce music/dance battles between the top idol stars, who are about to have nervous breakdowns, and the school’s troubled students. Much of the plot for this highly anticipated drama remains veiled, however, fans don’t have to wait too long as it plans to air by the end of this month following medical drama “Brain.”

“Fashion King” tells the story of a young man who makes it big in the fashion industry. Young Kyul begins his career as a poor, aspiring designer in the streets of Dongdaemun. Yoo Ah In plays the male lead Young Kyul, and Shin Se Kyung will play his female counterpart Ka Young. “Fashion King” is also SNSD’s Yuri’s first lead role in a drama. In 2007, she, and fellow SNSD member Sooyoung, had a small role in sitcom “Unstoppable Marriage.” “Fashion King” will focus on the youths’ experiences of challenges, success, love, and desire. The drama is slated to premiere once “Salary Man Chohanji” ends in March.

“Love Rain” is a fantasy, melodrama that centers around a love story in two different periods – the 1970s and present day. Hallyu stars Jang Geun Suk and SNSD’s YoonA play Seo In Ha and Kim Yoon Hee, two college students who fall in love with each other in the 1970s. Unfortunately, these two do not get their happily ever after. Fast forward to the present, Seo Joon, In Ha’s son (also played by Jang Geun Suk) meets and falls in love with Ha Na, Yoon Hee’s daughter (also played by YoonA). Jang Geun Suk’s 1970s Seo In Ha is a romantic arts student who is willing to lay down his life for the love of his life. His son Seo Joon, on the other hand, is a carefree photographer who enjoys a freewheeling lifestyle. YoonA’s 1970s Kim Yoon Hee is a pure, elegant “campus goddess,” while her daughter Ha Na is a bright and lovable character. Director Yoon Seok Ho and writer Oh Soo Yeon, the masterminds behind the sensational melodramas “Winter Sonata” and “Autumn in my Heart” have teamed up once again to produce “Love Rain.”

So there you have it! Which dramas are you looking forward to in 2012?