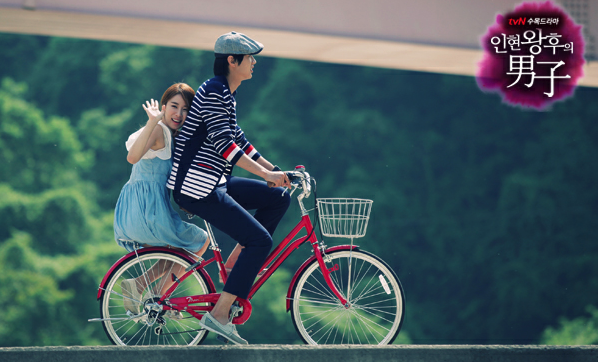 Love is in the air! It’s been a crazy week in the entertainment industry with three on-screen couples officially announcing their off-screen relationship! After a local media broke the news about their secret date, “Queen In Hyun’s Man’s” Ji Hyun Woo and Yoo In Na officially announced their relationship. Yoo In Na confirmed on her radio show that “Ji Hyun Woo is no longer Queen In Hyun’s man but Yoo In Na’s man,” attracting oohs and awws from fans.

All these announcements about on-screen couples developing into off-screen couples have led us to research celebrity couples who have met while working together on dramas. Some of these lovebirds have ended up getting hitched, while others went their separate ways.

One of the most-loved celebrity couples, Ki Tae Young and Eugene met in 2009 through their drama “Creating Destiny.” Stuck in an arranged marriage by their parents, the two, both equally uninterested in each other, teamed up to devise a plan to avoid their impending wedding. The two actors announced their unexpected marriage last May, revealing that they had been dating since January 2010.

Probably the most loved and hated couple, Lee Min Ho and Park Min Young shared a sizzling chemistry with each other. Shortly after the end of “City Hunter,” the paparazzi captured the two enjoying a late-night date, surprising fans. They sent shockwaves throughout Asia when both parties confirmed that they developed feelings for each other while filming their drama. Unfortunately, it was belatedly revealed that Lee Min Ho and Park Min Young went their separate ways after a few short months, citing busy schedule as the main reason for the breakup. As one of the most envied celebrity couples, Lee Min Ho and Park Min Young received both positive and negative attention with their relationship. Following their breakup, several Chinese media reported that their relationship was fabricated, deliberately made known to the public to stir up media and fan attention.

“Save the Last Dance for Me”: Ji Sung & Lee Bo Young

Although she lost her Hyun Woo (played by Ji Sung) to Eugene in “Save the Last Dance for Me,” Lee Bo Young still has the real Ji Sung next to her side. The two lovebirds met on the set of “Save the Last Dance for Me” in 2004 and started dating in 2007. While both parties denied wedding rumors last month, they were recently spotted on a date, showing that that their relationship is still going strong after five years.

“The World They Live In”: Hyun Bin & Song Hye Gyo

The two stars met on the 2008 drama “The World They Live In” (aka “Worlds Within”) and had been dating for approximately two years. They stayed in touch after wrapping up their drama, constantly and texting each other. Soon afterwards, they had a momentary separation as Hyun Bin was in Busan filming another drama. The time apart allowed them to discover their true feelings, and Hyun Bin confessed his feelings for Song Hye Gyo as soon as he returned to Seoul. Meanwhile, the two announced their breakup hours after Hyun Bin left for the Marines.

They met on the set of blockbuster drama “Athena: Goddess of War,” where Jung Woo Sung and Lee Ji Ah played a timeless couple that reunited after separation. Days after their drama ended, the co-stars were spotted on a date in Champs Élysées in Paris. After checking with their respective agencies, it was revealed that Jung Woo Sung and Lee Ji Ah did not have any events scheduled in Paris, which led to dating rumors. Days after, on Jung Woo Sung’s birthday, the actor revealed that he was indeed dating Lee Ji Ah on his homepage. However, following Lee Ji Ah’s scandalous marriage and divorce to 90s pop icon Seo Taiji, the two naturally parted ways.

Lee Chun Hee met his wife Jun Hye Jin while starring in the drama “Smile, You” in 2009, where they were also a couple. They began dating soon after the drama ended and announced their surprise engagement on December 2010. Prior to their wedding, Lee Chun Hee also revealed that his fiancé was pregnant. On July 30, 2011, they welcomed their first daughter.

The couple originally met in 2007 through “Air City” and also worked on Andre Kim’s fashion show together. They managed to hide their relationship from the public for two years before getting caught by the paparazzi. Like Ji Hyun Woo, Lee Jin Wook revealed that Choi Ji Woo was his ideal type and that he was happy to work with her on numerous interviews. In 2011, the couple decided to end their three-year-relationship and remain friends.

So, which on/off-screen couple is/was your favorite?
Leave your comments below!