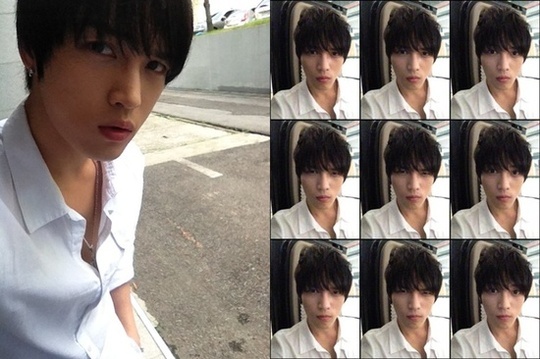 It was another fun week with celebrities capturing moments of everyday life and sharing them on social media!

Jang Geun Suk showed why he calls himself the “Asia Prince” with photos of his French fans, while JYJ’s Jaejoong shared multiple cute selcas from the set of his drama. IU showed off gifts she got from her uncle fans, and miss A’s Suzy and SISTAR’s Bora disarmed their uncle fans with heart melting smiles.

(Scroll through the list by clicking the arrow on the bottom right of the image!)

“Thank you, my witty WGM staff!” – Super Junior’s Leeteuk shows his appreciation to the “We Got Married” staff with a photo of a funny wreath!

“Last night, with the quiet sound of rain…and makgeolli…and pa jeon…kkyao^0^ Jin Young hyung and I shared a lot of fun stories for the first time in a while~and wished for each other’s success!! Keke” – 2PM’s Wooyoung and JYP enjoy the weekend with Makgeolli (Korean rice wine)

“Key just fooled around with my shoulder” – SHINee’s Jonghyun’s got a new face on his shoulder!

“Halo Baaaaaaack!! Yo” – B.A.P’s Zelo goes no makeup for a special selca!

“T-shirt from one of our Thai fans! Love it!” – Wonder Girls’ Lim shows off her gift from Thai fans!

“I think episode 15 and 16 are pretty fun…” – JYJ’s Jaejoong gives a sneak peek into his drama “Time Slip Dr. Jin”

“Click! With Kyuhyun in America~! I want to go to that amusement park again~ >< A photo from Japan! Kyu’s black pupils are really big” – Super Junior’s Kyuhyun and Ryeowook flaunt their milky complexion in this selca!

“I took photo while looking at the Yeonduk Sea~Why are Hyejung unni and Yongbok oppa so funny. They are really the best! Now to Choon Chun Go Go!!” – G.NA looking gorgeous next to the water!

“It was so hot and we got exhausted so I laid down with Suzy…. Keke But we are still smiling ^-^/ kekekeke” – Suzy and Bora disarm their uncle fans with heart melting smiles!

“Wearing the bercali-looking clothes that Mr. Shin gave me…Let’s go to Busan with the bag that Hyunmoo uncle gave me!” – IU shows off the gifts she got from her uncle fans!

“Working hard filming today too…! Fire! Be more lively when you’re tired and sleepy from an all-nighter! (millions of difference faces)” – JYJ’s Jaejoong shares a series of selcas from while filming!