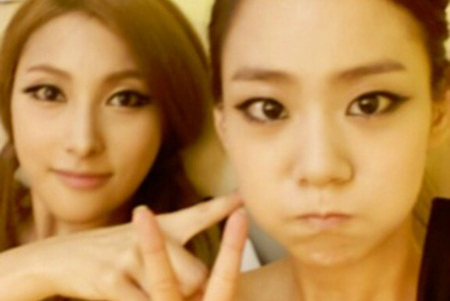 On August 22, Han Seung Yeon posted a photo on her Twitter with a message. “Kyaah let’s go! Thanks for being with us! Our members and Kamilia, fighting! Go all the way, Pandora~”

In the photo, the group’s leader Gyu Ri shows a playful side as she pokes into Seung Yeon’s cheeks. Meanwhile, Seung Yeon poses adorably with blown up cheeks toward the camera, holding up a “v.”

Meanwhile, KARA held a press conference on August 22 at Walker Hill Hotel, in recognition of the release of their fifth album “Pandora” and their official comeback. The music video for their title song has already broke 1 million views in less than two days of release on YouTube.